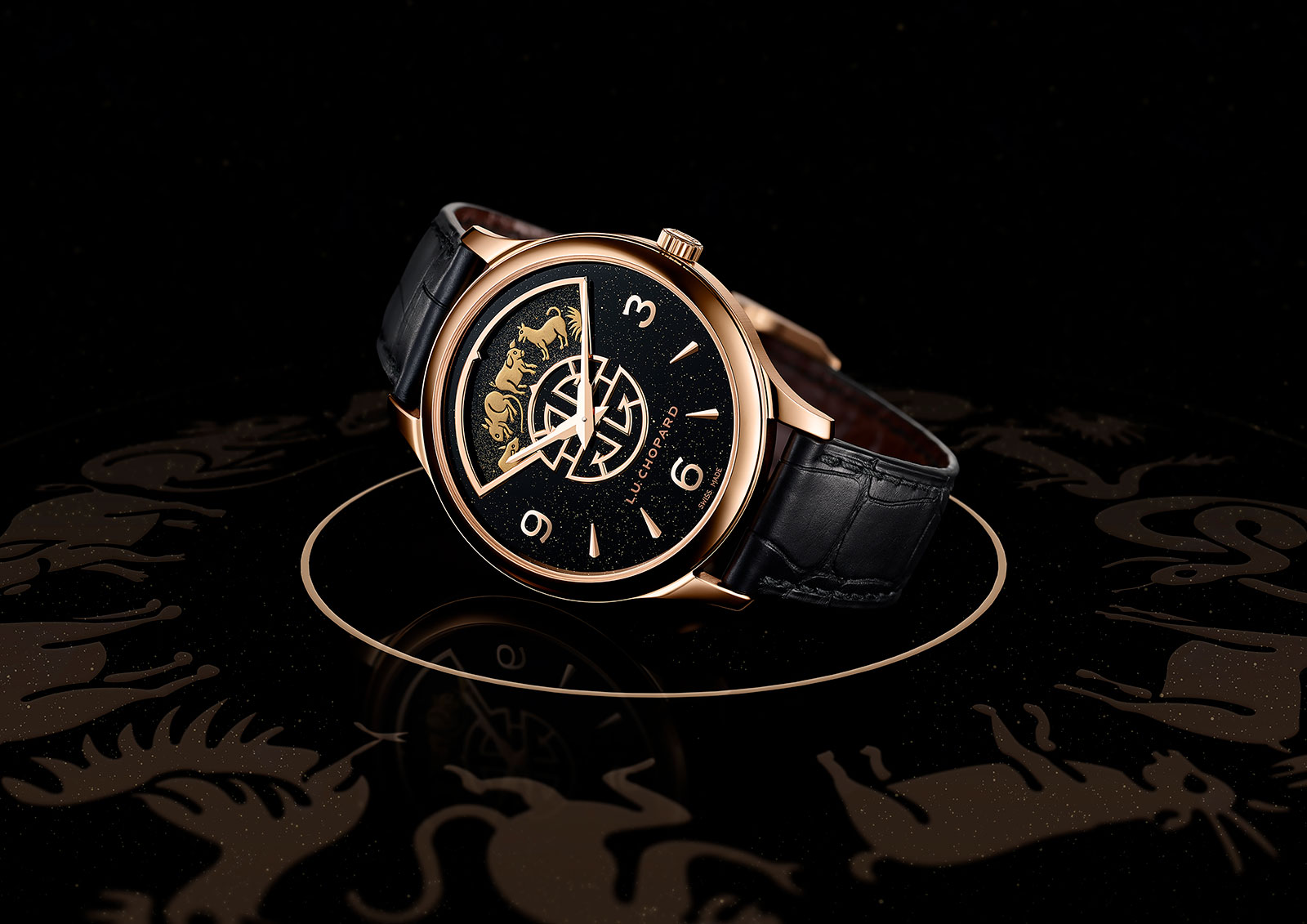 While the L.U.C XP is best known as Chopard’s pared-back, formal-dress wristwatch, it also forms the base for an interesting collection of limited-edition timepieces decorated in urushi and maki-e, forms of traditional Japanese lacquer – an East Asian take on the metiers d’art often found in Swiss watchmaking.

The latest addition to the line its most unusual to date, being not just a decorative expression but also a new, albeit simple, complication. Decorated in lacquer and gold dust, the L.U.C XP Urushi Spirit of Shí Chen has a mechanism displaying traditional Chinese time of 12-hour days, with each hour represented by an animal of the Chinese Zodiac. 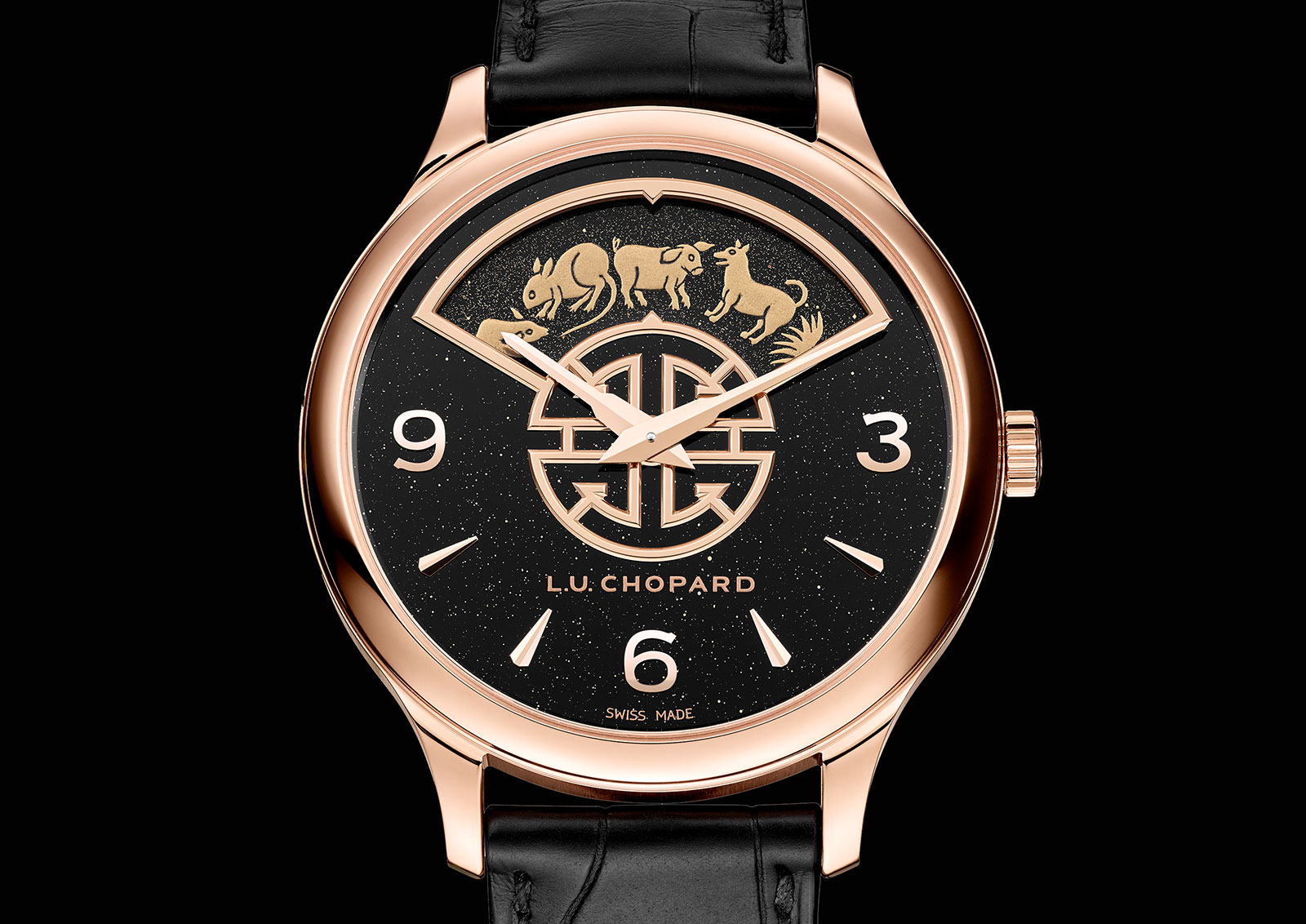 Watches inspired by Chinese culture are common – and increasing given the strength of demand for watches in China – but they oftentimes have an over-the-top aesthetic. Chopard, on the other hand, incorporated the Chinese motifs elegantly, resulting in an appealing watch. At a distance, the Spirit of Shí Chen has a simple, geometric style, but up close the dial reveals its decorative details.

The deep-black lacquer dial – sprinkled with gold dust that evoke the cosmos – gives the watch a clean, restrained appearance, save for the elaborate, solid-gold frame and shí chen indicator. An ancient way of telling time is uncommon in a modern watch, making the shí chen indicator the highlight – appropriately enough it is rendered in gold powder and fine detail, with a gold-dusted background that’s denser than that of the main dial. 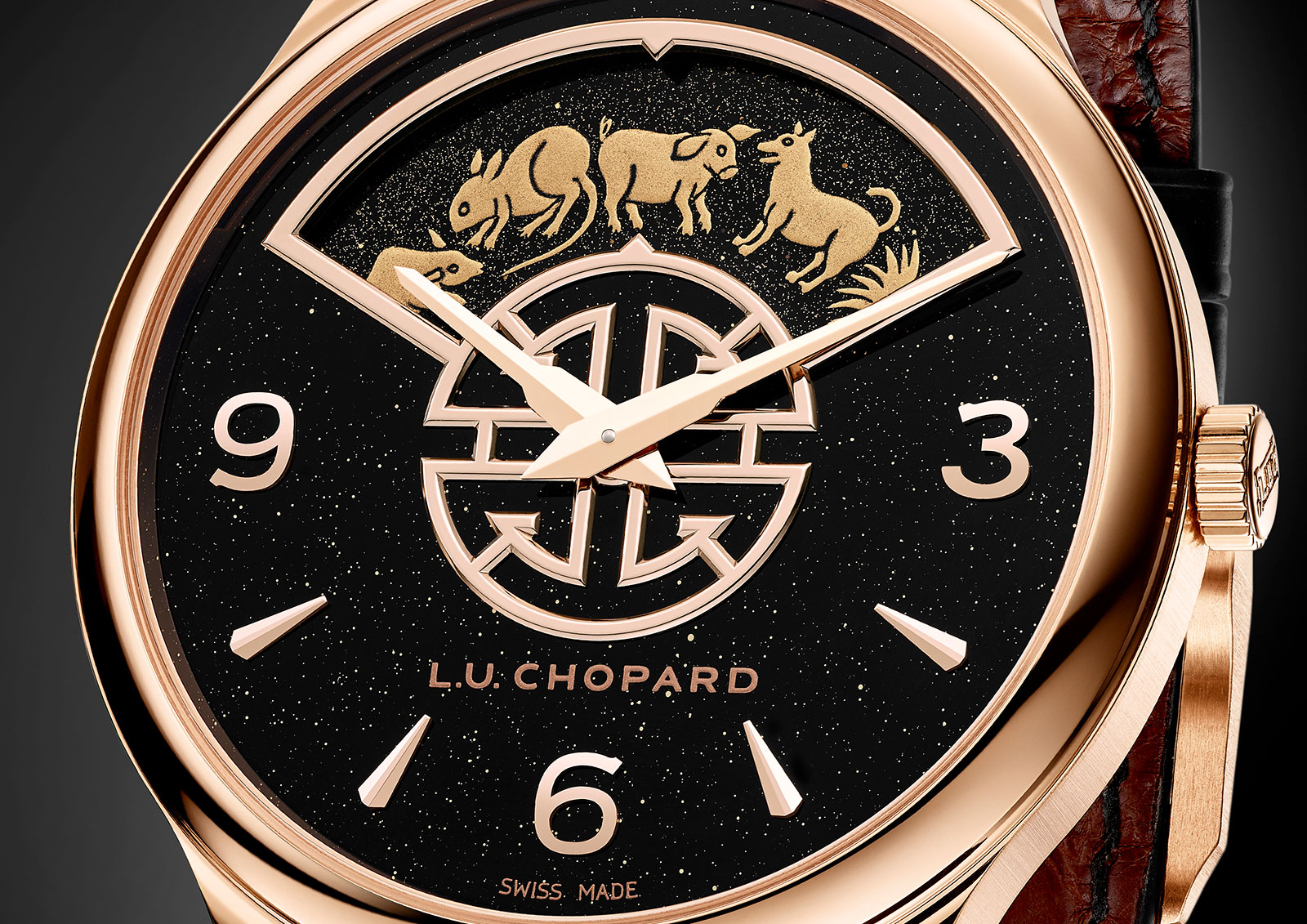 But the extra features of the Spirit of Shí Chen make it pricey compared to the standard models. At US$38,000, it’s almost US$14,000 more expensive than the ordinary L.U.C XP Urushi, which has a similarly lacquered dial but no shí chen indicator. Considering both the artisanal and mechanical features of the Spirit of Shí Chen, the steep premium is reasonable, but tough to accept.

That said, the Spirit of Shí Chen is an attractive watch produced in a relatively small run of just 88 pieces, so it has a strong appeal, especially with the Lunar New Year coming up – this is very much an ideal watch for the occasion. 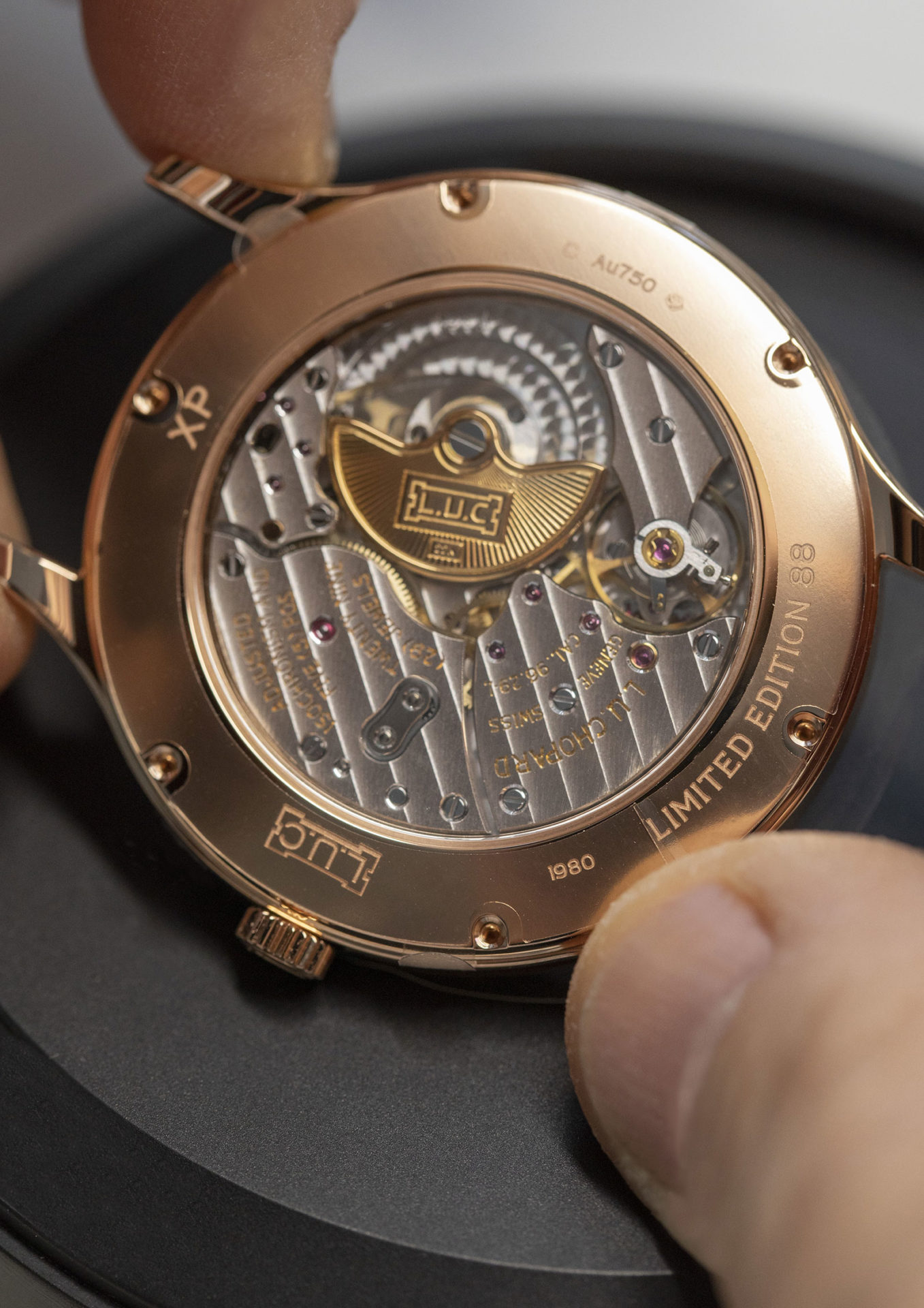 The finely-finished automatic movement within

Shí chen, or 时辰, was part of the Chinese timekeeping system until the start of the Qing Dynasty in the 17th century, but it was in principle similar to modern timekeeping, with a 24-hour day divided into twelve segments, each two hours long.

As a result, the shí chen display on the watch is essentially a 24-hour indicator, making one complete revolution every day. Each traditional hour is represented by an animal of the Chinese Zodiac, starting from with the rat and ending with the pig. 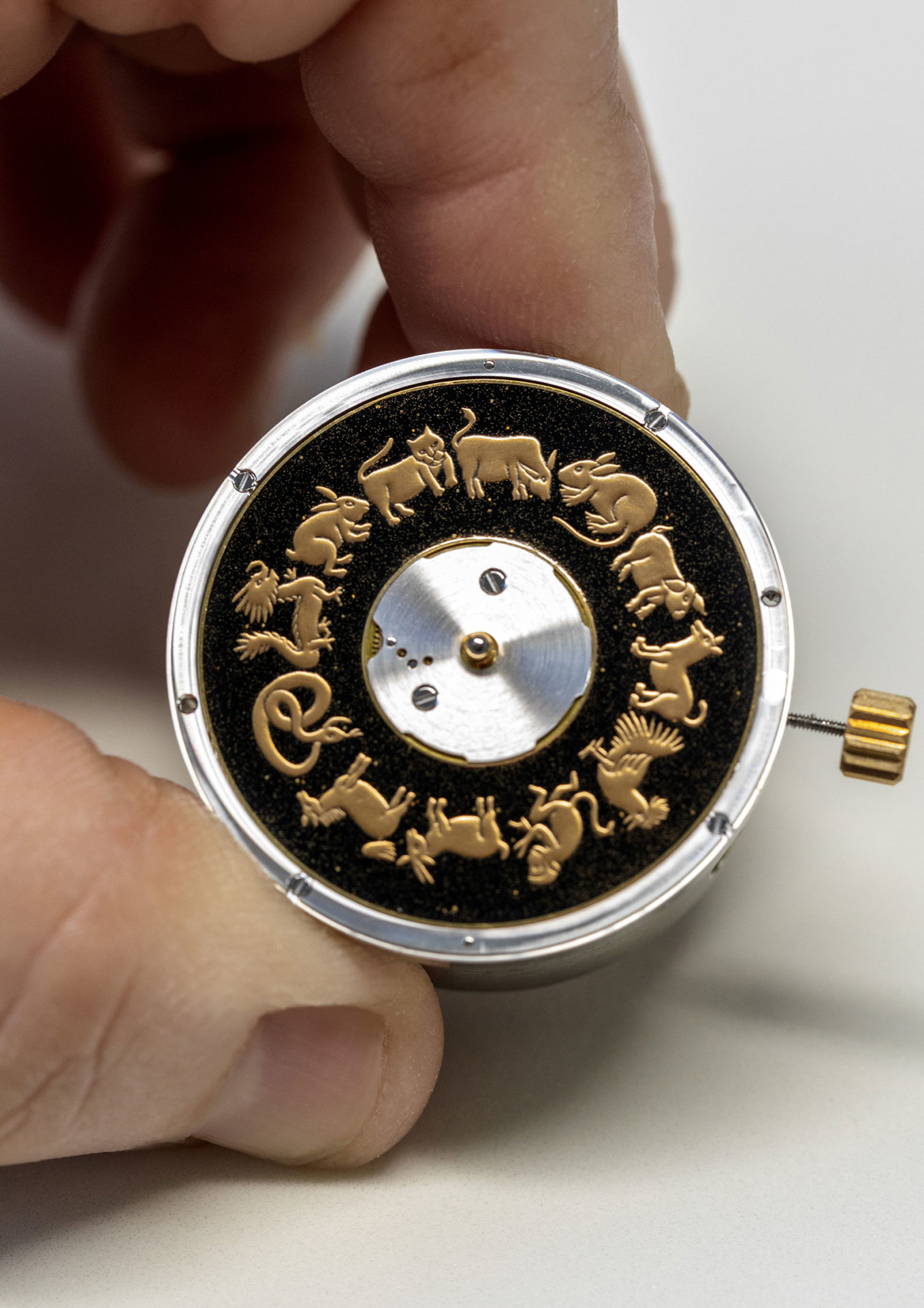 The shí chen disc below the dial

Traditionally, each shi chen was symbolised by an animal from the Chinese Zodiac, in an order corresponding to the progress of the zodiac. For instance, the first shí chen, 11 pm to 1 am, was known as 子时, is represented by the rat, the first animal of the Chinese Zodiac – a result of the historical belief that the rat is most active during this period.

While simple in form, the lacquered dial is adorned with several notable features. Like all of Chopard’s lacquer dial, this is made by Yamada Heiando, a century-old firm that supplies lacquerware to the Japanese Imperial Household. Specifically, the dials are the work of Minori Koizumi, a lacquer artisan who is also responsible for past lacquered dials. 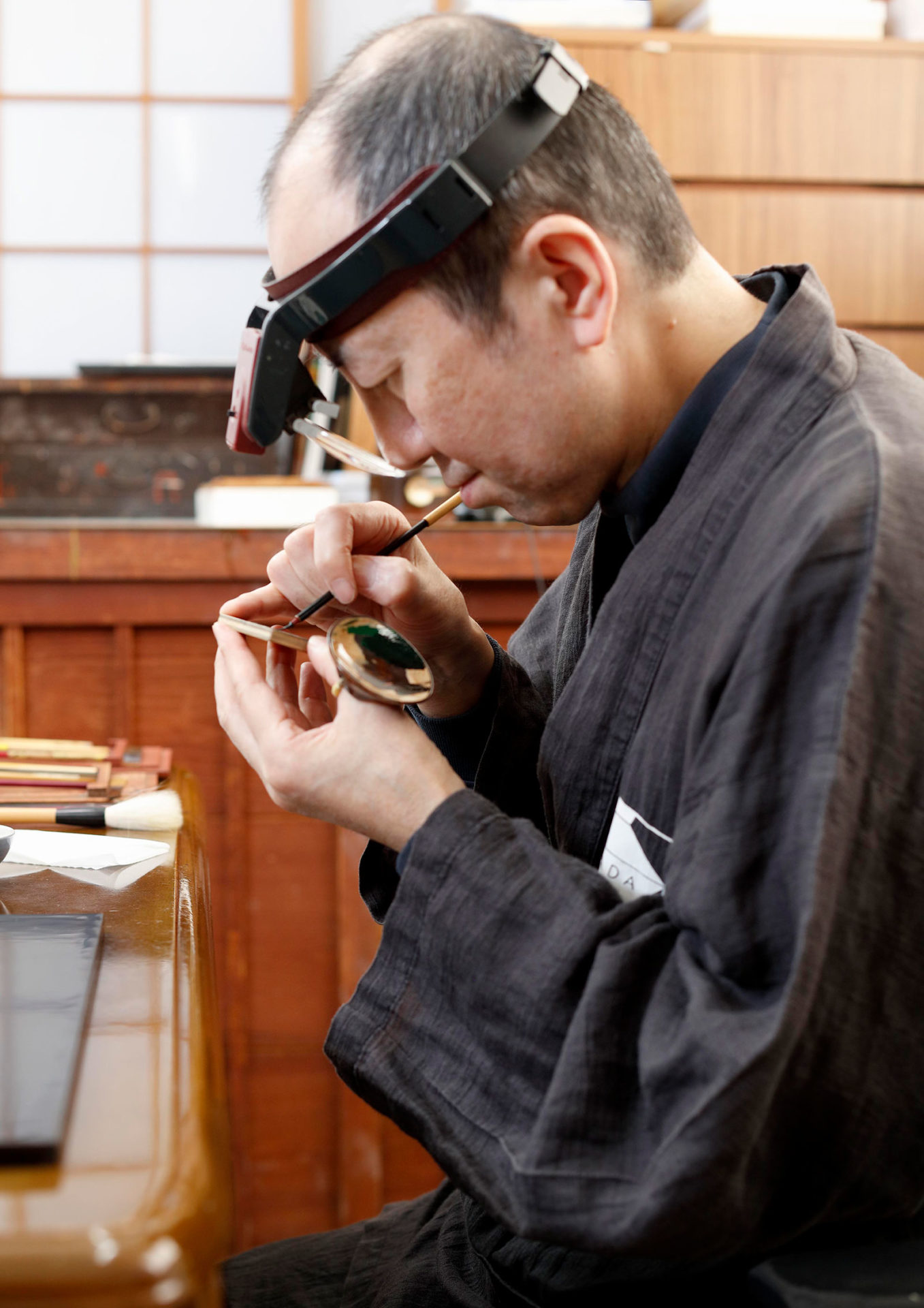 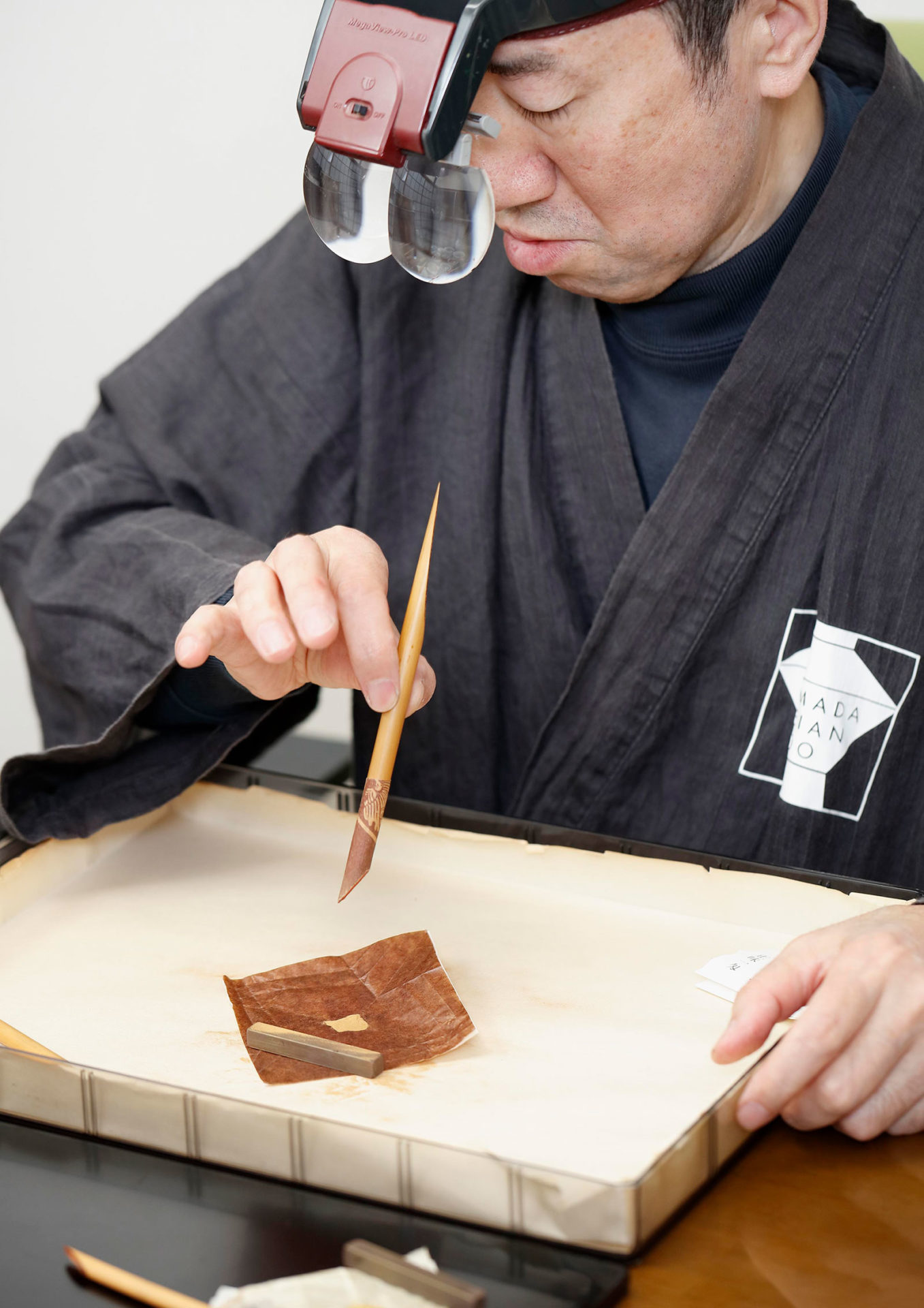 The dial is entirely decorated in maki-e, a traditional Japanese lacquer technique that relies on sprinkling metal powder on a wet lacquer surface to form motifs and patterns.

The dial is lightly dusted with gold powder, while the shí chen disc, visible through a fan-shaped opening at 12 o’clock, has the Zodiac animals in carefully sprinkled gold dust. 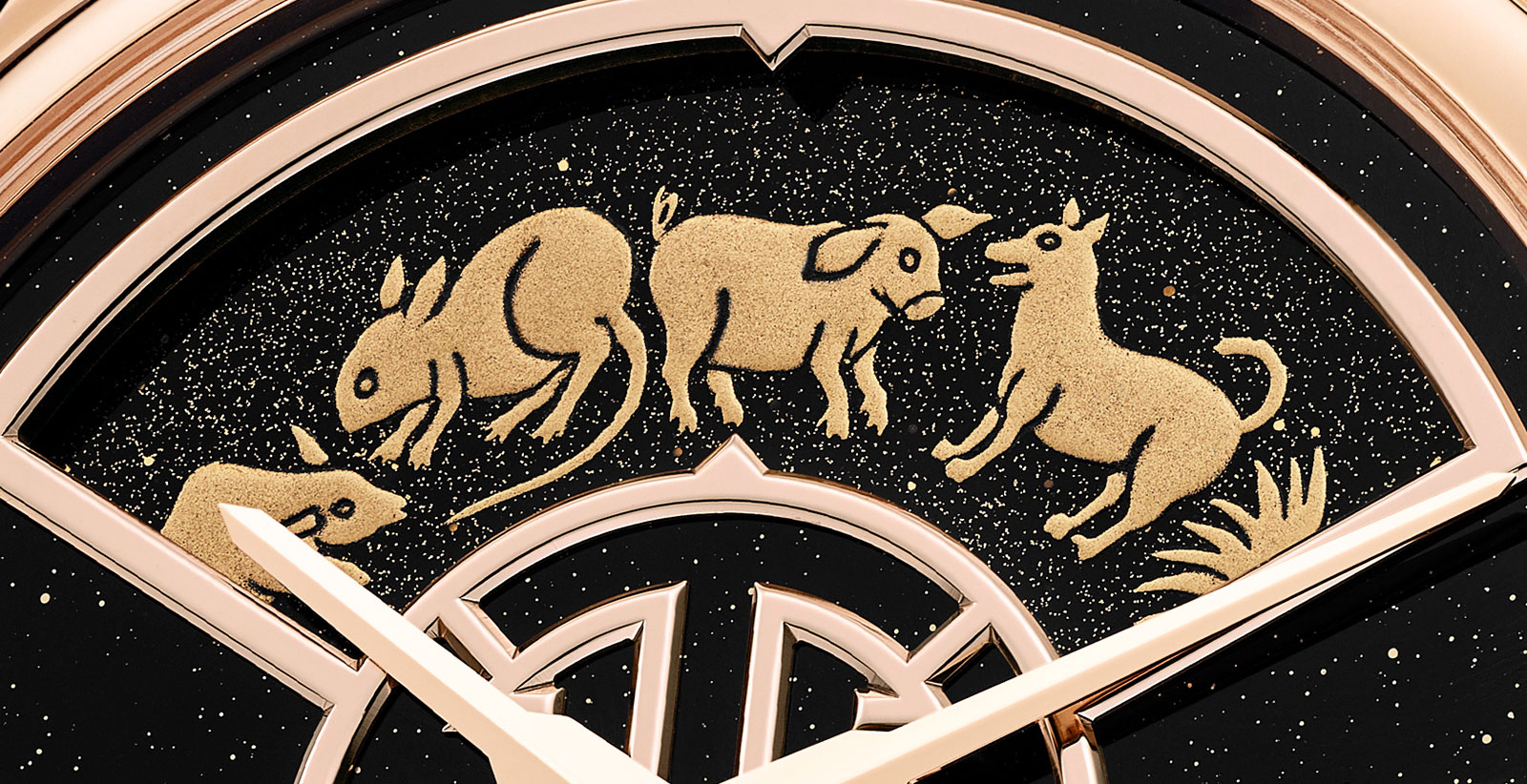 Beyond the lacquer decoration, the fan-shaped frame for the aperture is surprisingly elaborate, having bevel along its edges, which also incorporate several sharp, inward angles.

Formed of solid, 18k rose gold, the frame also forms the lu xing emblem at the centre of the dial. One of the three stellar deities of prosperity, fortune, and longevity, lu xing symbolises prosperity and high rank, and is usually attired in the dress of an official in ancient China. 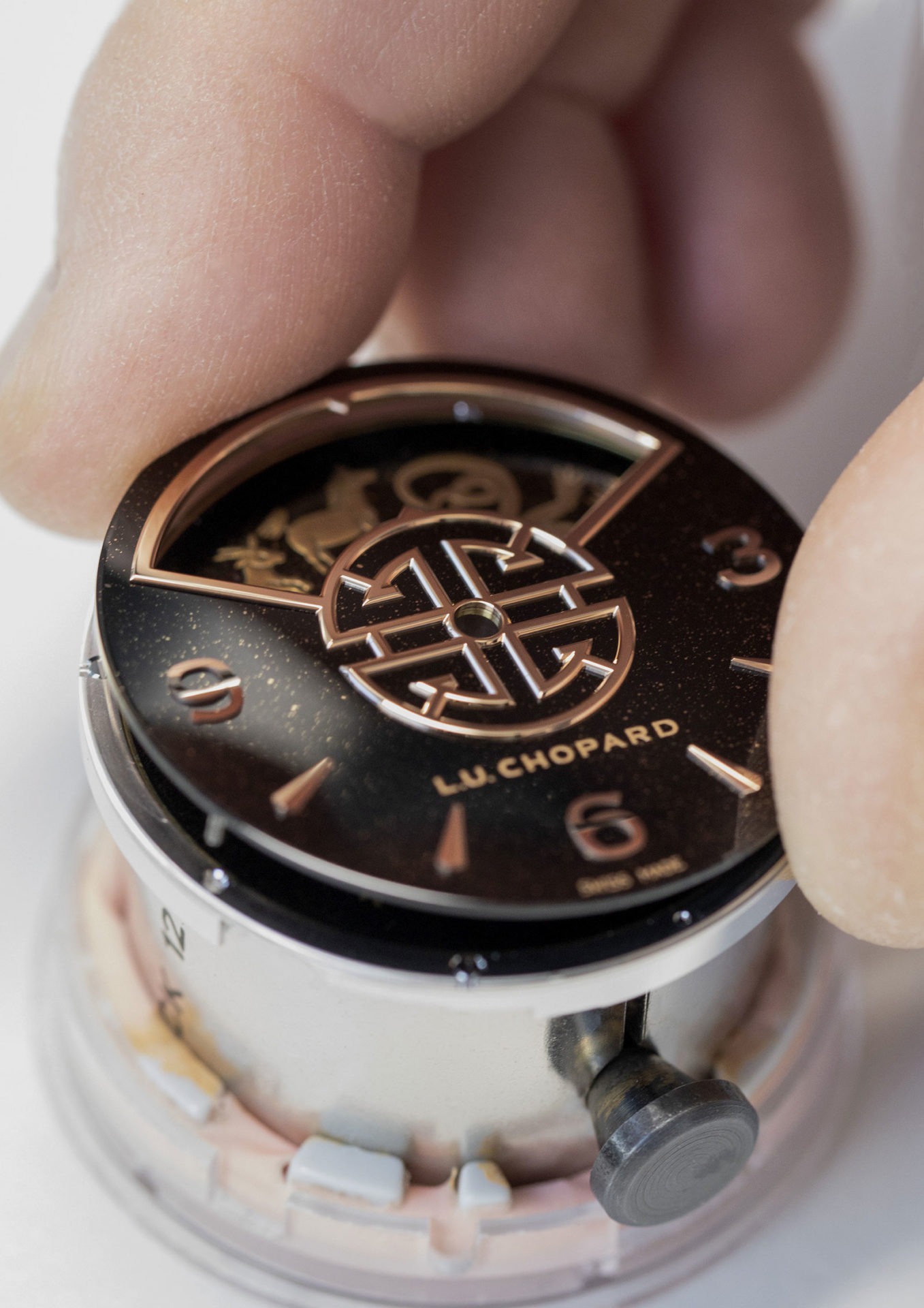 The module sits on the L.U.C 96.17-L, the automatic movement found in the standard L.U.C XP that has a micro-rotor and 65-hour power reserve. Though slim, the movement is has a high-quality, sophisticated construction, along with excellent finishing. 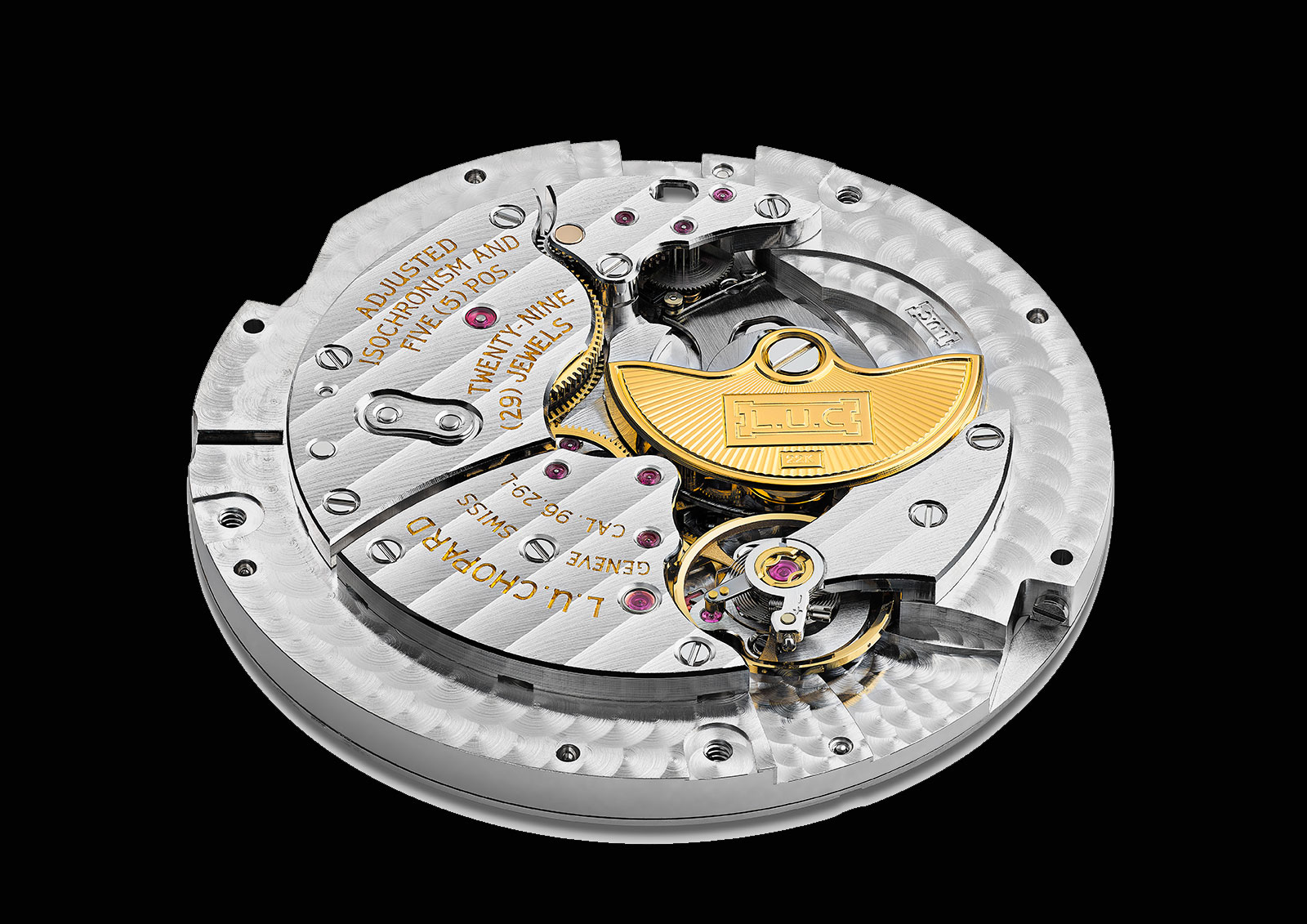