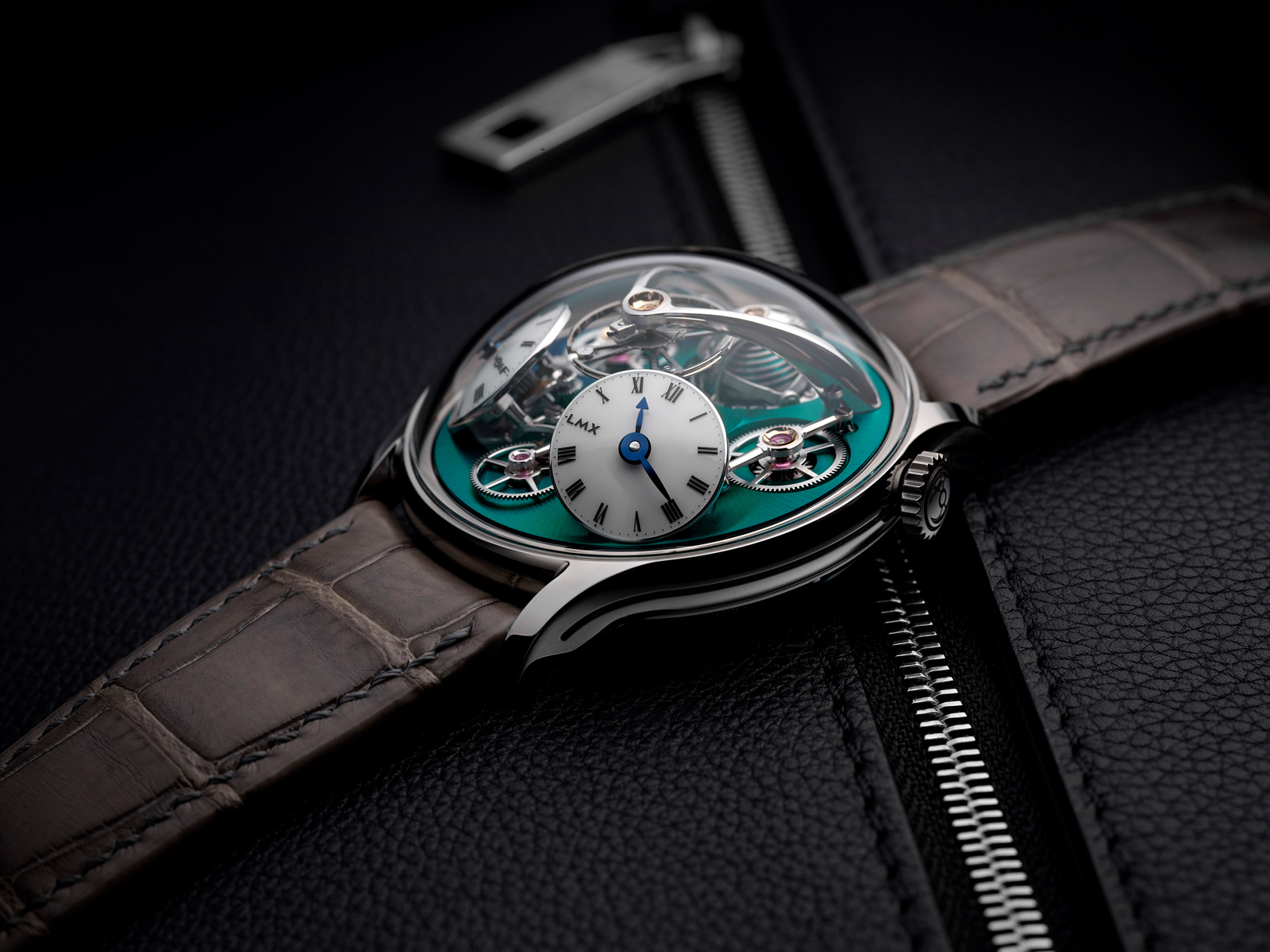 Though MB&F was founded on the premise of avant-grade expressions of the watch case with its Horological Machines, the brand has an equally successful, and far more traditional, collection of watches with conventional round cases, the Legacy Machines (LM).

It’s hard to believe, but the LM collection is a decade old now (and MB&F itself is almost 16 years old). For the LM’s 10th anniversary, MB&F has created ultimate version of the LM1, the watch that launched the series.

Short for Legacy Machine X – with the final letter being a Roman “10” – the LMX incorporates diverse elements from the past decade’s watches as well as several new ideas, resulting in a familiar but all-new “machine”. So it has the familiar twin sub-dials for two time zones, but now inclined. Likewise, the LMX features a vertical power reserve indicator, but now made more elaborate with a spherical display. And all of that is contained within a thinner case that’s similar to that first seen on the LM Thunderdome triple-axis tourbillon. 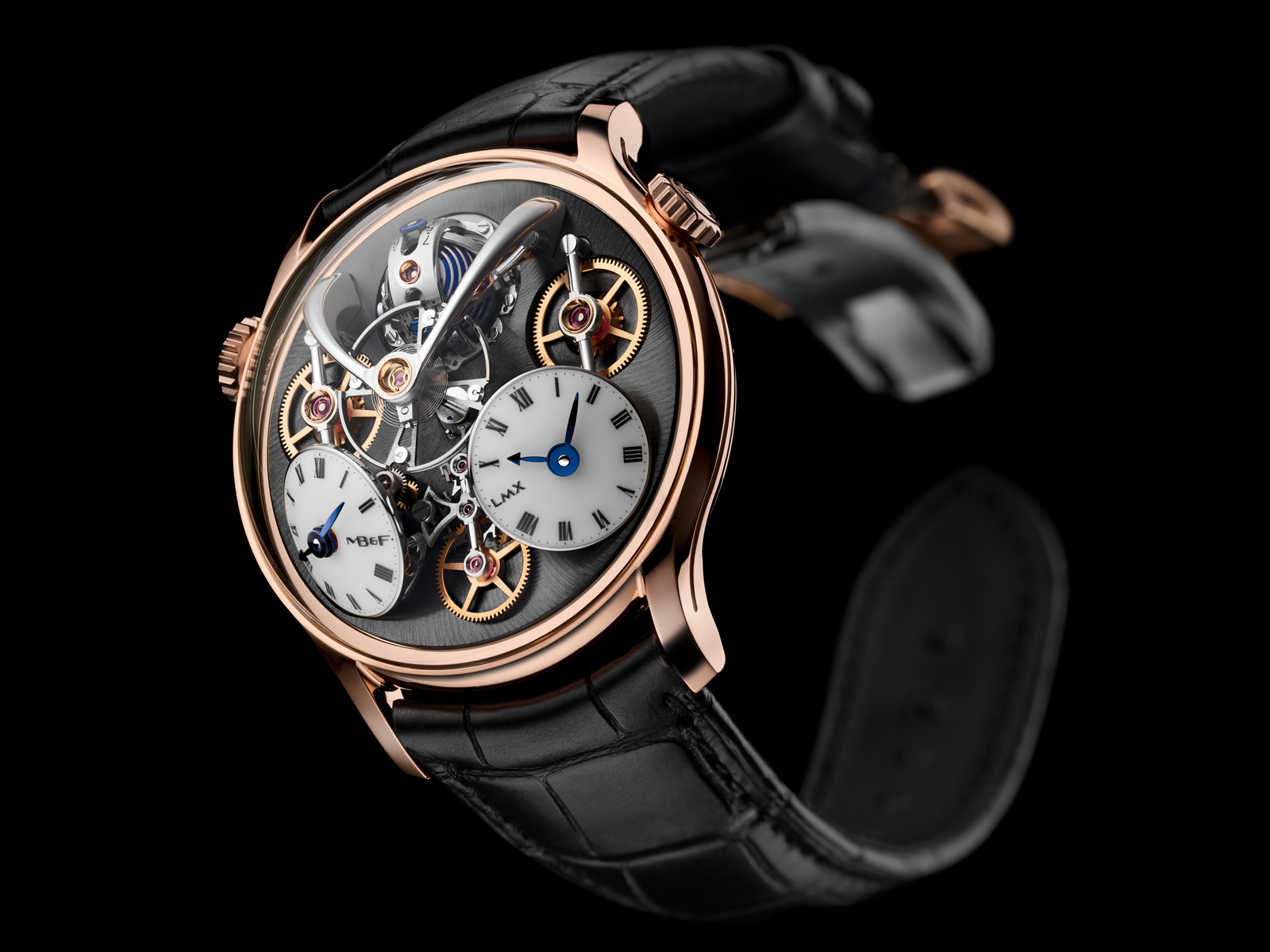 The LMX in pink gold

Compared to the original LM1, the LMX is indeed heavily upgraded inside and out, with a sleeker styling that includes a more three-dimensional dial, as well as a newly-developed, triple-barrel movement with weeklong power reserve. By most measures, the LMX is an excellent evolution of the original LM idea – and an impressive watch in its own right – but it does feel less adventurous than it should be for a milestone project. 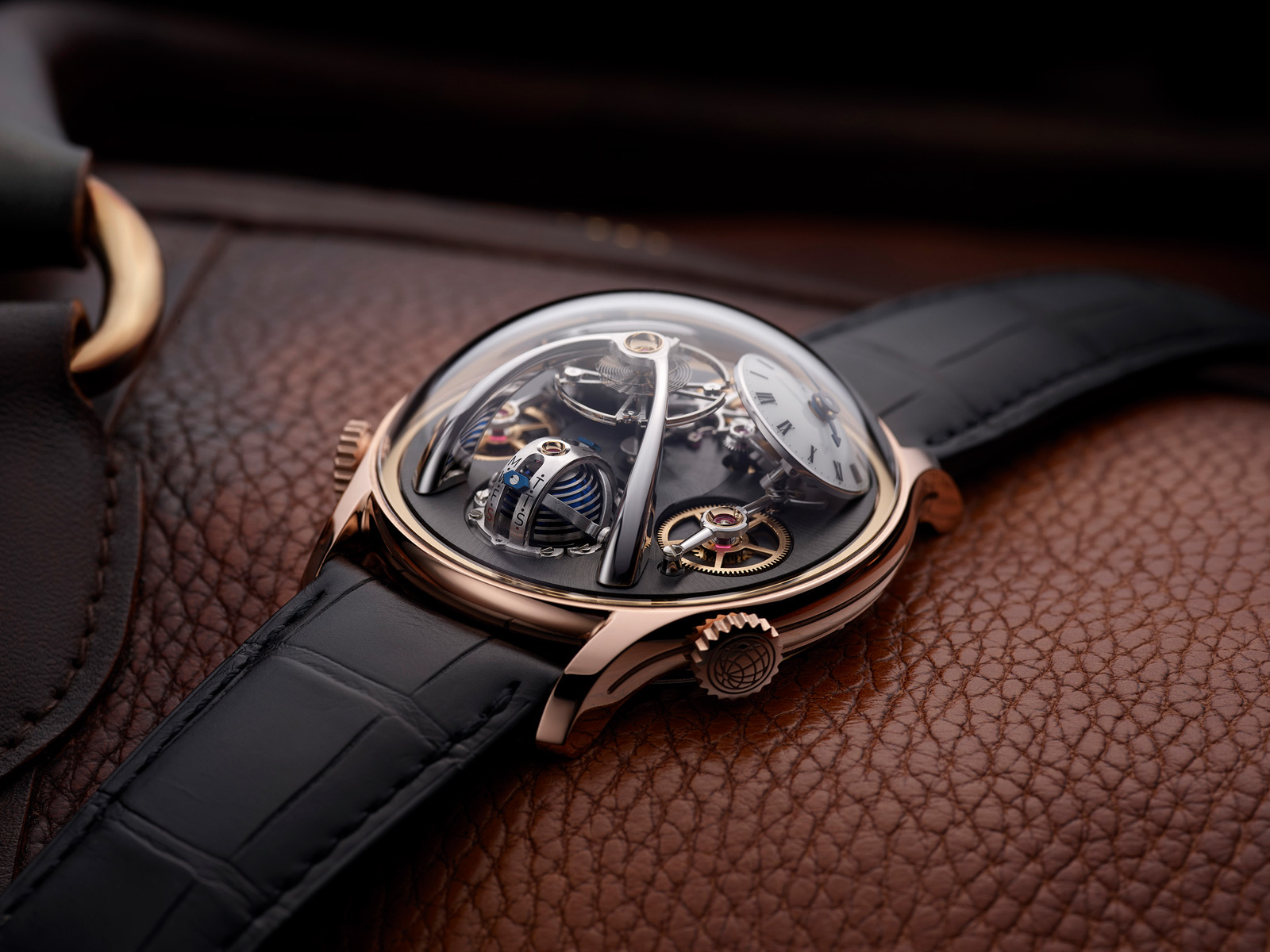 Several details of the LMX are striking. As the twin dials are inclined towards the wearer, more of the mechanics on the dial are revealed – illustrating how MB&F excels at creating a dynamic mechanical architecture that’s also cleanly styled. Add to that several steel bridges that are symmetrical and finely finished, and there’s a lot to admire on the dial.

One of the most intriguing elements of the dial is the hemispherical power reserve, which doubles up as a day-of-the-week display. But it is small enough that it’s hard to read, and also a bit of a hassle: indicating the day means having to wind the watch on a specific day in order to coordinate the indicator with the calendar. 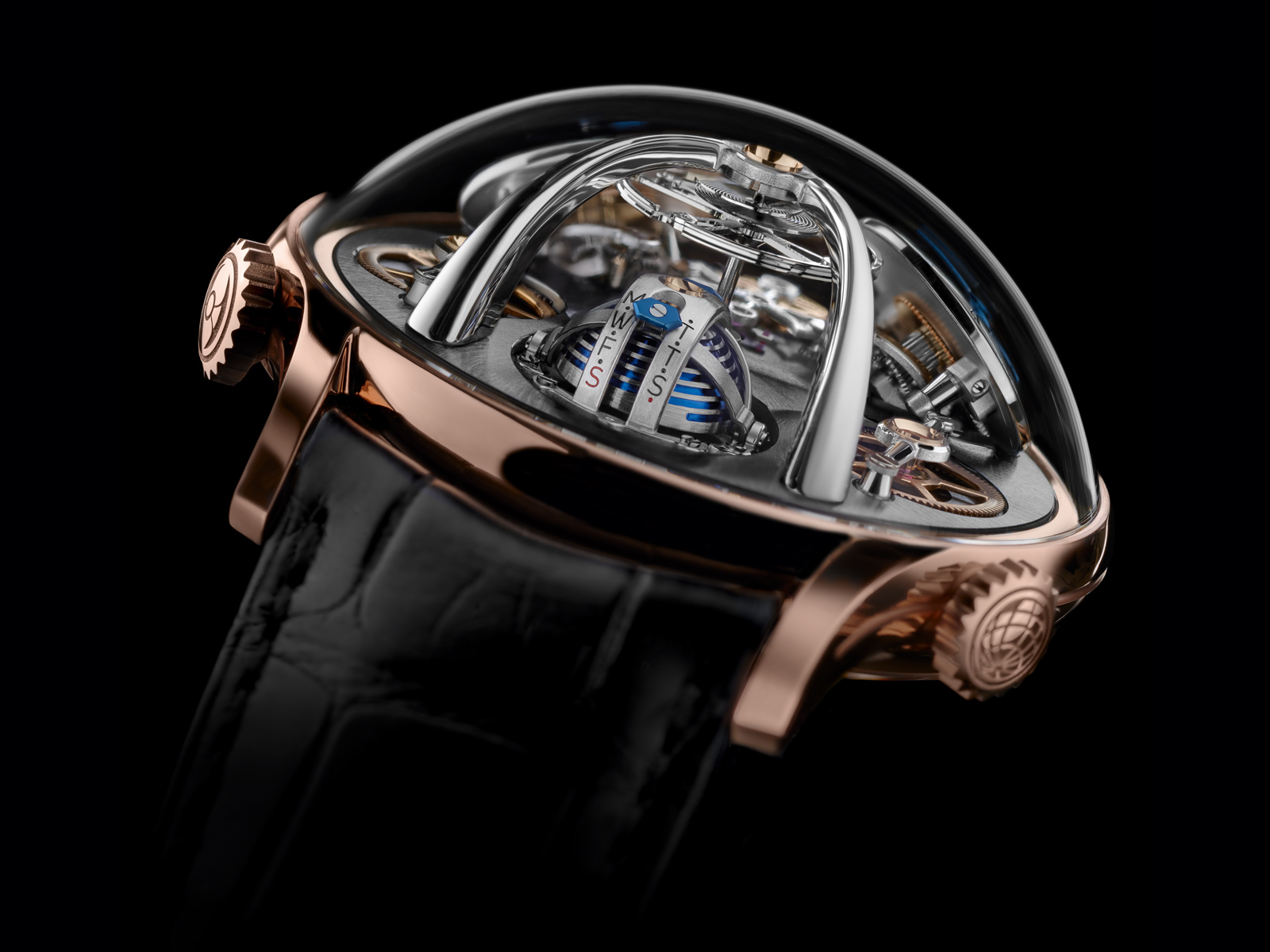 The hemispherical power reserve indicator is two sided, showing both the day of the week or days of power reserve remaining, and can be rotated according to the wearer’s preference

The LMX, however, is similar in size to the LM1, which means more complicated mechanics within a similar space. That achievement is notable, and enhanced by the perceived slimness of the watch. Because its case band is narrow – the majority of its height is the huge crystal – the LMX feels surprisingly thin.

All the improvements comes at a slightly steeper price than the original, starting at US$112,000 for the titanium LMX, rising to US$128,000 for the pink gold version. That said, factoring in inflation and the additional features, it’s a fair increase. 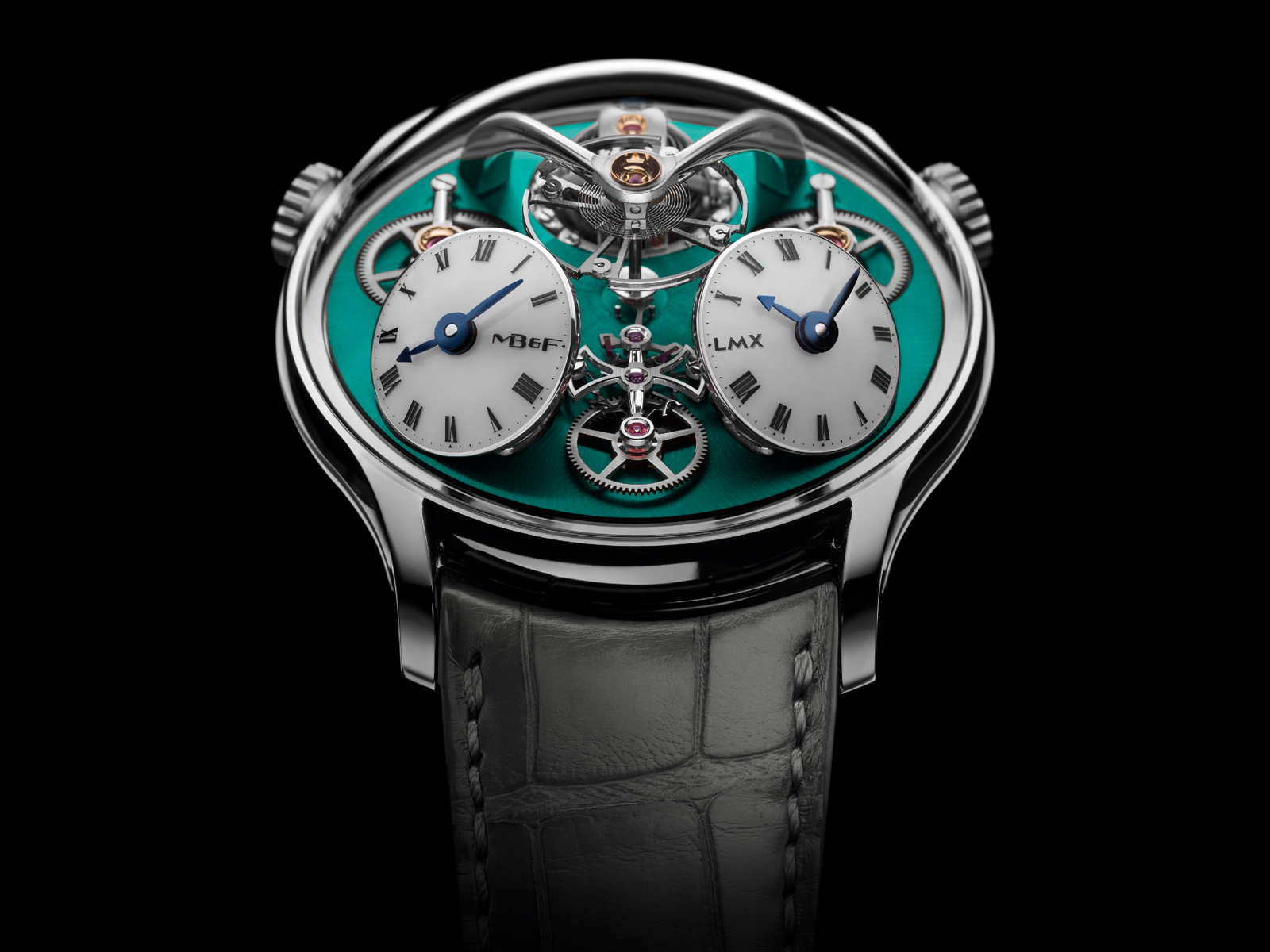 And in titanium with a green dial

Though functionally similar to the LM1, the LMX is quite literally a decade more advanced. It’s powered by a novel movement that’s been designed to reveal more mechanics on the dial, while having a much longer power reserve and preserving the dimensions of the case. 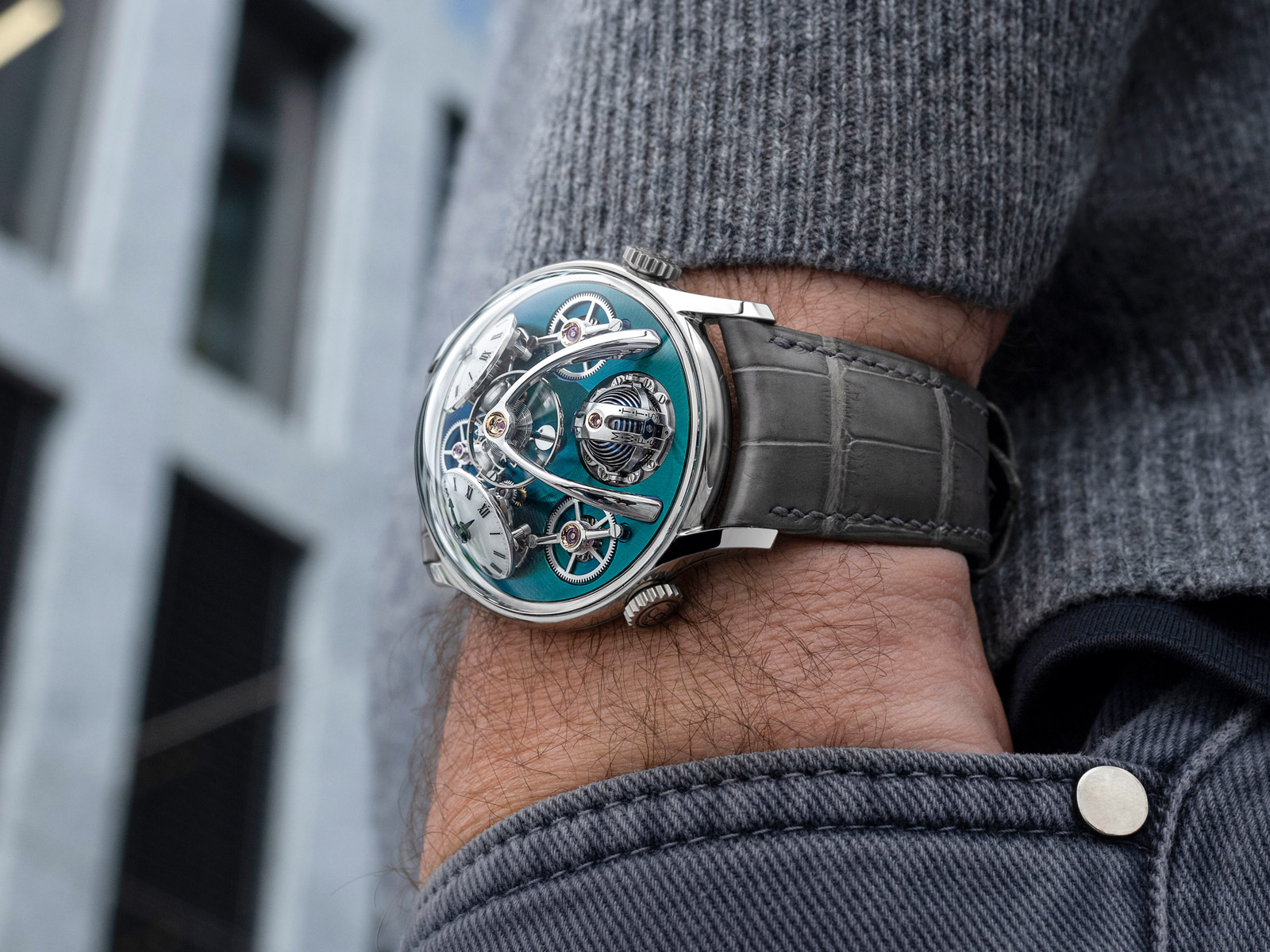 To start, the dial side is designed to showcase its finishing, one of the focal points of the LM series, which are inspired by classical, 19th century watchmaking.

Perhaps the most compelling bit of the construction are the steel bridges – all wonderfully finished. Take for instance the pair of steel bridges behind each of the twin dials, which despite being smallish, manage to be highly polished and rounded on its top surface with straight grained flanks, and set with a bowl-shaped gold chaton. 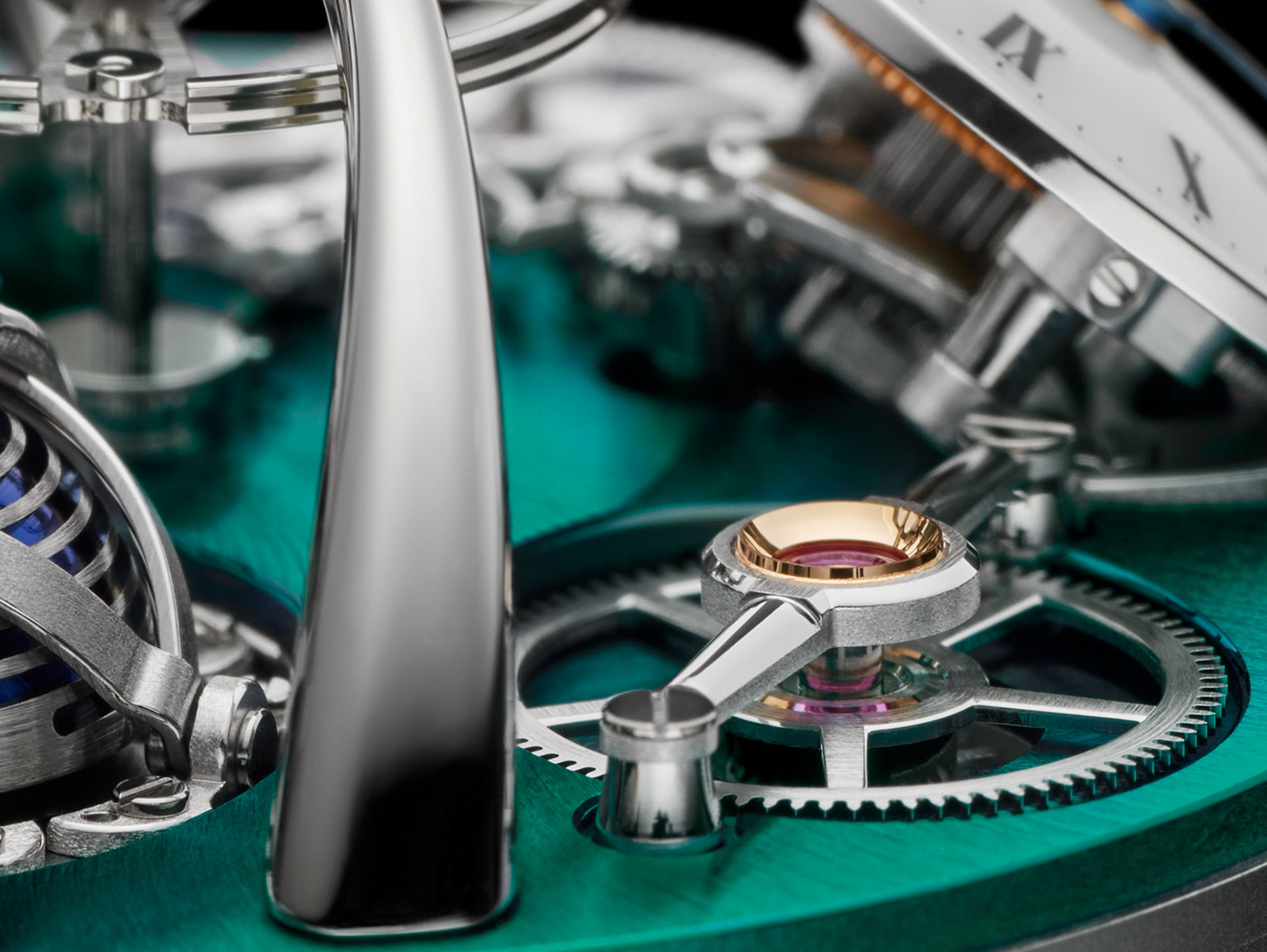 And on the back, the layout is unusual too. Instead of a having the bridges styled like a pocket watch as is tradition with the LM series, the movement architecture is decidedly modern. 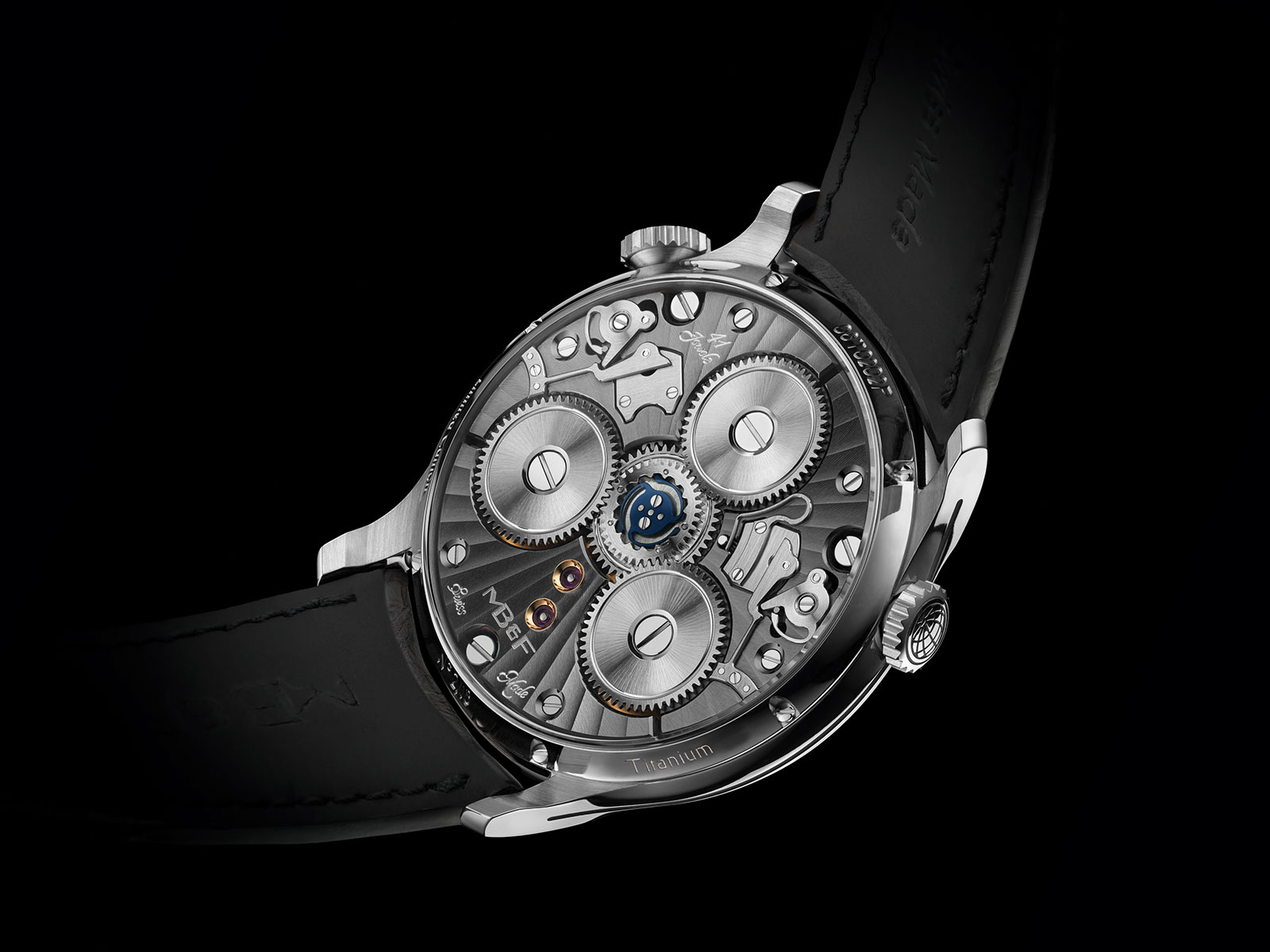 It has three barrels surrounding a central ratchet wheel that incorporates an unusual, blued three-armed click spring, resulting in a long, seven-day power reserve, a huge increase from the 45 hours of the LM1.

The fact that the movement is far more advanced than that of the LM1, while retaining the 44 mm diameter as the LM1, testifies to the smartness of its construction. 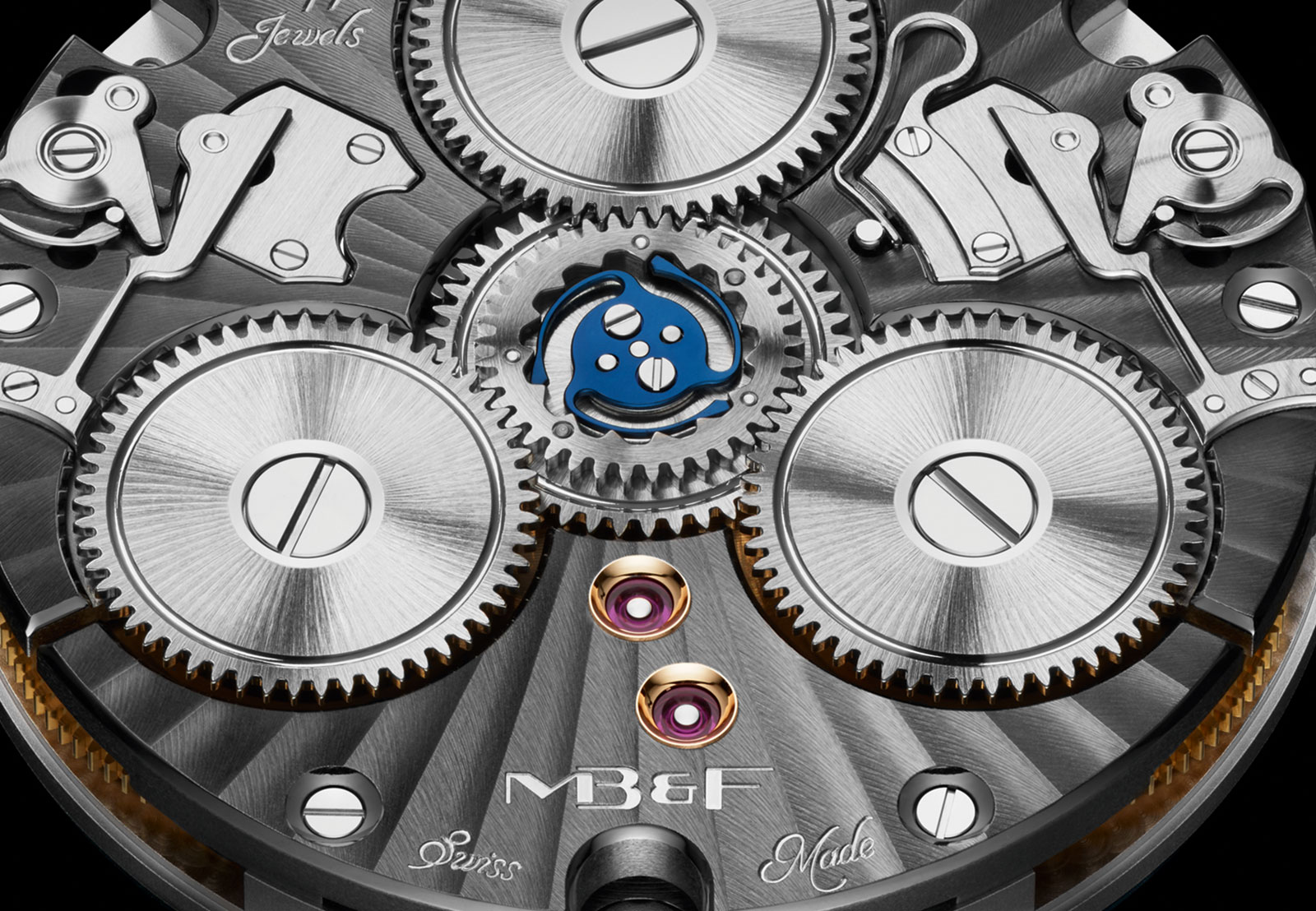 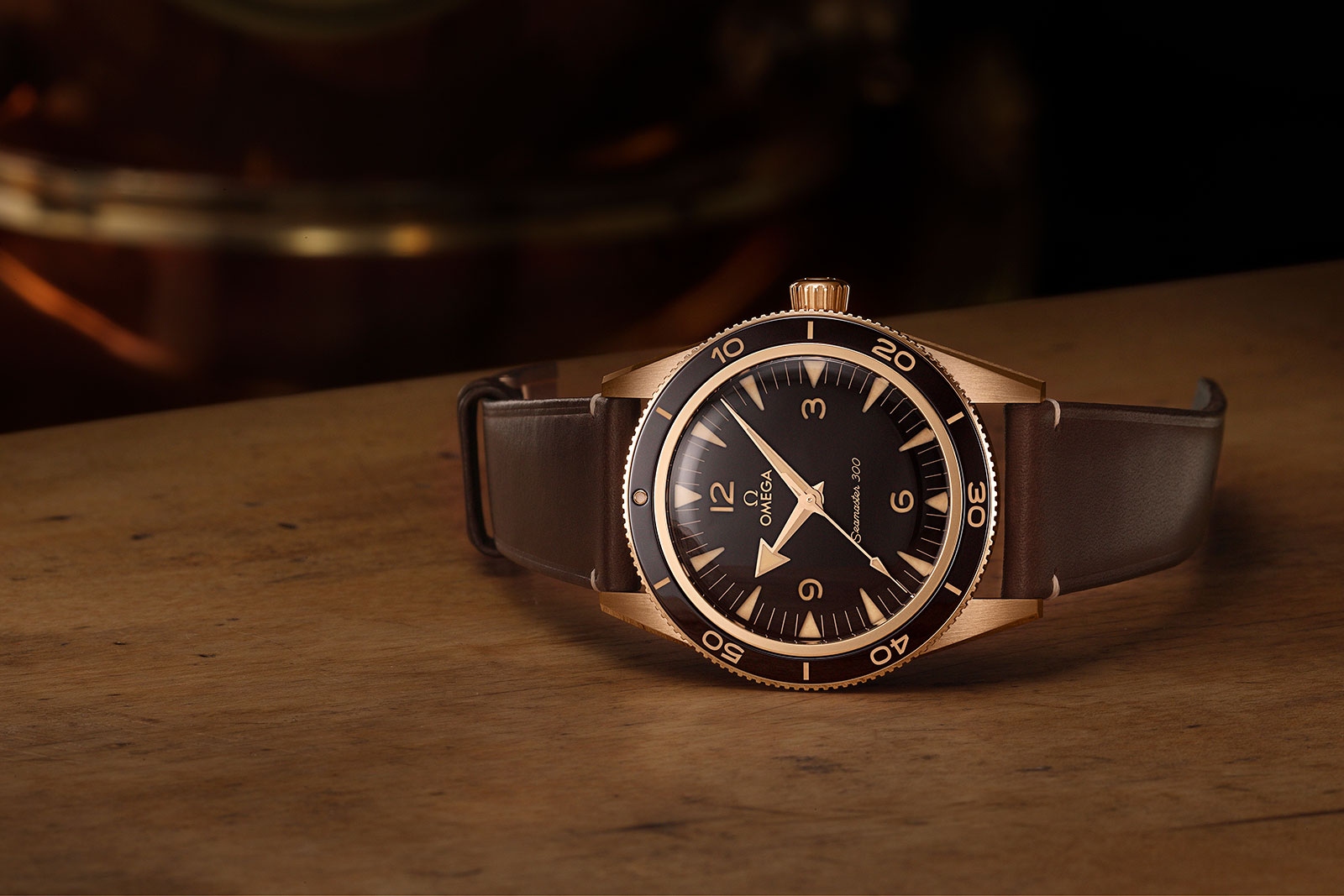 Bronze dive watches are already a well established fad, and a little passé. Omega has sidestepped that by going one step further, putting its own twist on the idea with an interesting proprietary alloy that combines copper and gold. This unprecedented material makes its debut in the Seamaster 300 Bronze Gold, the flagship model in its new line of retro dive watches.

Notably, because Bronze Gold is an alloy with low gold content – its proportion of the precious metal is less than 40% in contrast to 75% in ordinary 18k gold – the Seamaster 300 Bronze Gold is more affordable than the typical gold dive watch. 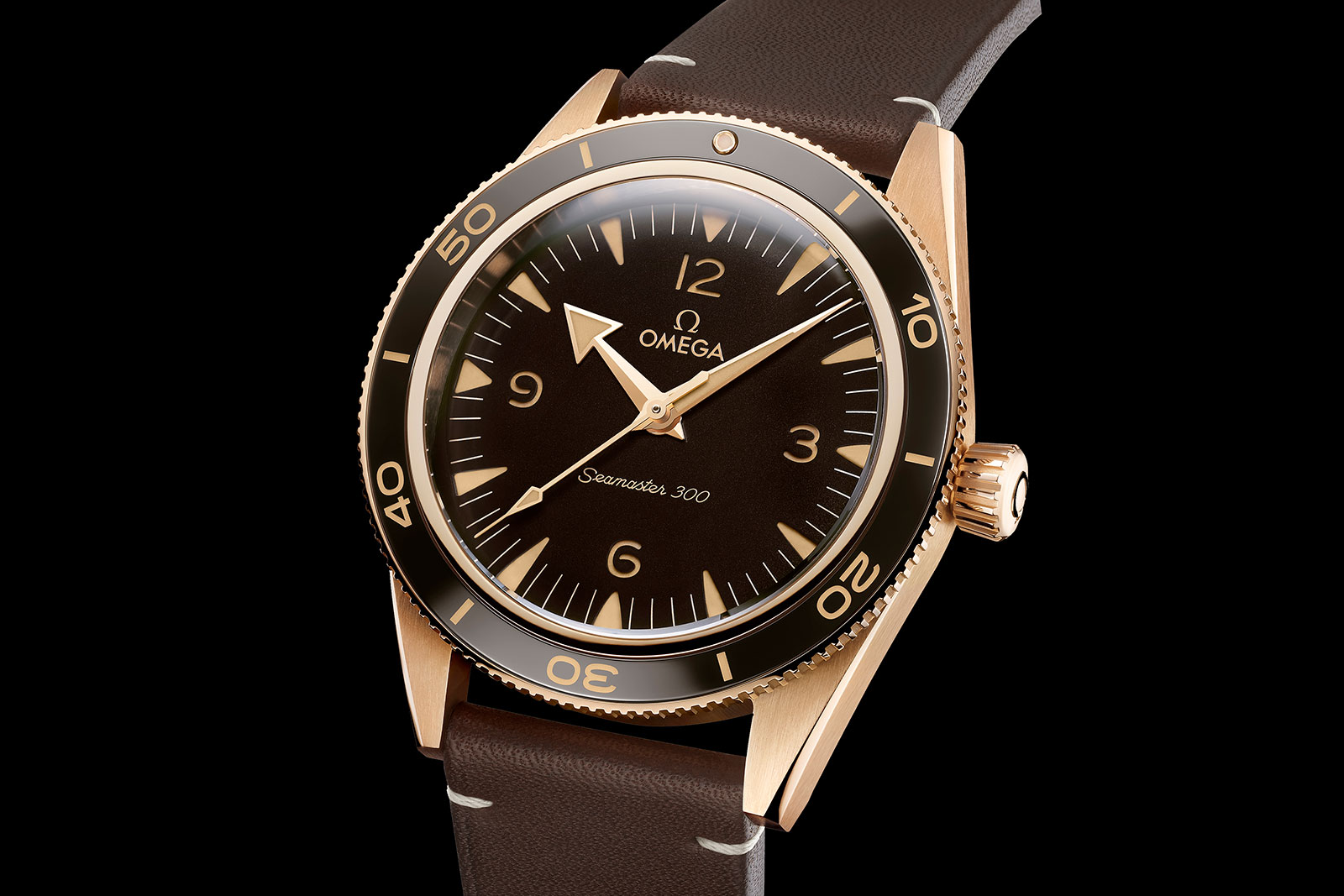 The new Seamaster 300 is the perfect watch to introduce the new alloy, since bronze is very much a material for maritime adventures, while its gold content creates a warm, slightly aged look befitting for the vintage-inspired design. The result is a watch that’s seemingly aged yet resplendent.

And it’s worth pointing out the faux-vintage Super-Luminova on the dial and hands work better with the warm colours of the Seamaster Bronze Gold than on the steel version that’s evidently a modern watch in colours and style.

Even though Bronze Gold is one of the most intriguing new alloys of late, Omega already has numerous gold alloys to its name – from white Canopus gold to red Sedna Gold – which makes the new alloy seem less exciting than it deserves.

Still, its retail price of a bit over US$11,000 makes the Seamaster 300 Bronze Gold one of the most affordable gold dive watches on the market, even if the case has less gold content than 18k gold. By that measure, it’s something of a value proposition. With a composition that’s 50% copper and 37.5% gold, along with a mixture of silver and palladium, Bronze Gold has a pinkish tone that lies in between Omega’s two other proprietary gold alloys, yellow Moonshine Gold and red Sedna Gold.

Even though it’s not conventional bronze, the case will develop a patina over time, but it will not develop verdigris – the green coating that’s actually oxidisation of bronze. Evoking sunken treasure, verdigris can stain clothing, and also cause skin irritation or allergies – an eminently practical advantage of Bronze Gold.

Because Bronze Gold is hypoallergenic, both the case back and buckle of the new Seamaster 300 are also in Bronze Gold, as opposed to being bronze-coloured steel or titanium as is the norm for bronze watches, in order to avoid direct contact with the skin. As with the steel Seamaster 300, the Bronze Gold variant features a sandwich dial that’s made up of an upper and lower dial plate. Intriguingly, the upper plate is actually conventional bronze, which has been treated to create surface oxidisation, essentially brown patina. In contrast to the standard Seamaster 300 that has a “lollipop” seconds, the Bronze Gold model has a conventional arrowhead seconds hand.

In addition, the bezel insert is brown ceramic – its resistance to scratches and corrosion provides an interesting juxtaposition against the Bronze Gold. Because of the ceramic-insert bezel, the Bronze Gold model is slightly thicker (14.4 mm against 13.85 mm) than its steel counterpart that has an aluminium bezel insert. Beating inside is the Master Co-Axial cal. 8912, a thoroughly modern movement that features a silicon balance spring and non-magnetic escapement, giving it substantial resistance to magnetism.

Availability: At Omega boutiques and retailers
Price: US$11,200, or 16,550 Singapore dollars Introduced in 1957 alongside the Railmaster and Speedmaster as part of the trilogy of “Professional” watches for air, land, and sea, the original Seamaster 300 was Omega’s first true dive watch. Even though the Seamaster Diver now wears the mantle of the brand’s highest-spec dive watch, the vintage-inspired Seamaster 300 stands apart in Omega’s crowded catalogue with its retro aesthetic.

For 2021, Omega doubles down on the vintage styling with a facelifted Seamaster 300 that’s closer to the look of the 1950s original. The new model will be available in steel, as well as the unusual proprietary alloy of Bronze Gold. A 1950s brochure for the original trilogy

When I first saw pictures of the new Seamaster 300, my immediate thought: “Absolutely beautiful”. I’ve always had a soft spot for the Seamaster 300, despite it being less of a “professional” watch than the Seamaster Diver. I’m a fan of its vintage aesthetic, especially how it harks back to an important era in Omega history.

The new Seamaster 300, with its subtle but significant improvements, is undoubtedly the best version yet (albeit only the second iteration). Compared to its predecessor, the new model has a cleaner, more coherent design. That being said, the abundant faux-aged Super-Luminova is a bit affected. The new Seamaster 300 is being launched in a limited number of options, steel with a blue or black dial, along with the Bronze Gold model. The steel models are also available on a bracelet that Omega says is better integrated and more ergonomic than the earlier generation.

My pick is the blue dial on a steel bracelet – the colour gives it a more contemporary allure, though purists will gravitate towards the black dial, which is very much like the vintage original.

And the steel version is also unusual because this is the first time Omega has offered the blue-dial Seamaster 300 in steel; it was previously available only in platinum, which was exceptionally expensive, or titanium, which was very grey. Many of the updates in the new Seamaster 300 were meant to bring its design closer to that of the original. To start with, the new Seamaster 300 is noticeably thinner at 13.85 mm compared to almost 15 mm for the outgoing model. That’s due in part to a flatter bezel, which now has an aluminium insert just like the vintage original. The first-generation model featured ceramic bezel insert, like almost all current Omega dive watches, which felt out of place on a vintage-inspired watch. In addition, the Seamaster 300 is equipped with a redesigned “sandwich” dial. Almost everything superfluous has been done away with. Gone is the awkward “Master Co-Axial Chronometer”, with the text on the dial reduced to just the logo and “Seamaster 300” in italics that are reminiscent of the original.

Furthermore, the dial also features a “lollipop” seconds hand (which was also found in the Seamaster 300 Spectre), along with Arabic numerals in a font that approximates that of the original. While the vintage styling is clear, the new Seamaster 300 is powered by a movement that is as modern as it gets, Master Co-Axial cal. 8912. Visible through its sapphire case back, it’s a METAS-certified movement with a silicon balance spring and non-magnetic escapement, giving it substantial resistance to magnetism.