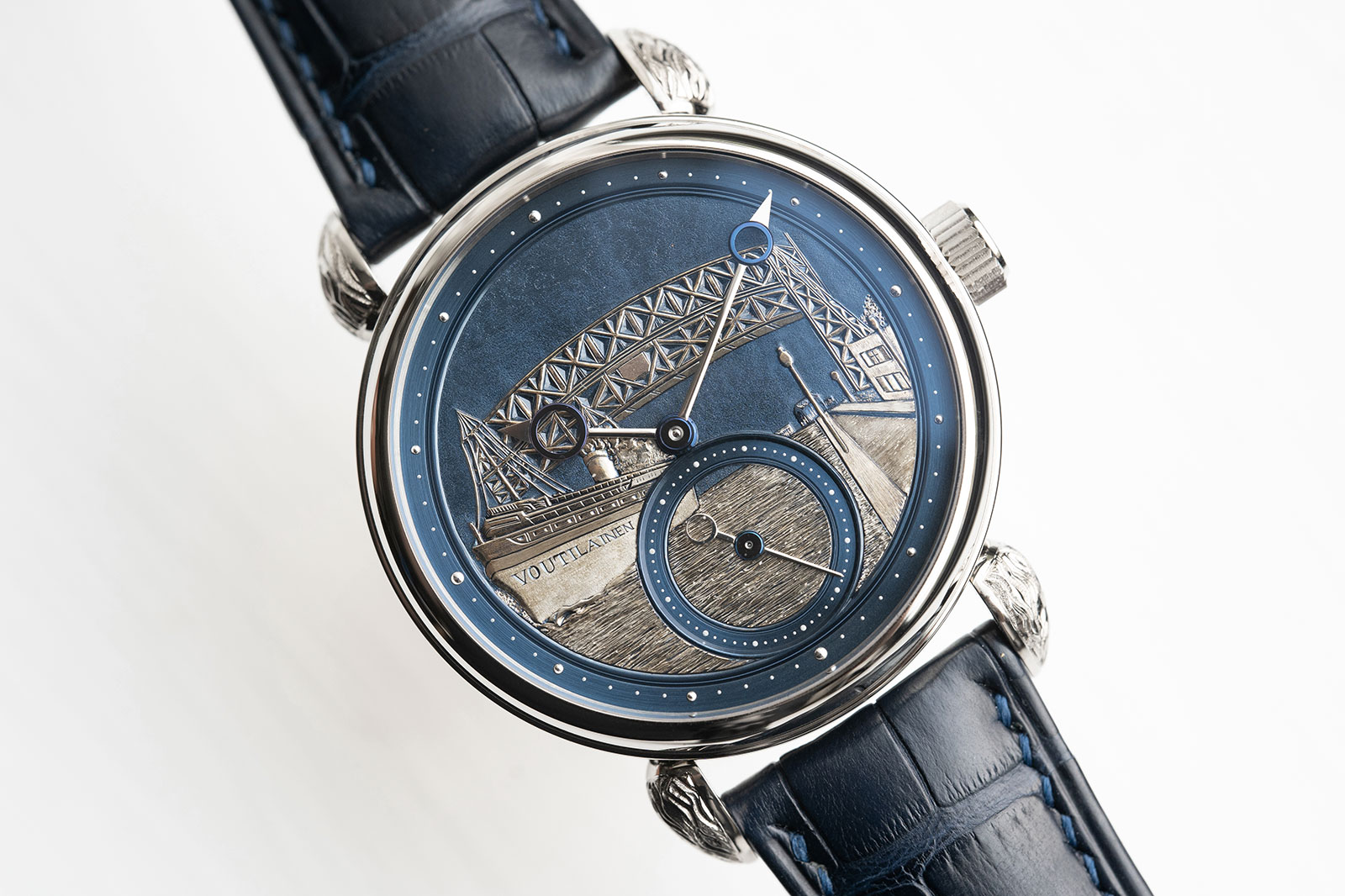 An American collector recently got in touch to share a recently completed Voutilainen Vingt-8 with a custom dial, a watch that’s unusual and interesting, while also having a thoroughly personal character. Christened the Duluth Aerial Lift Bridge Watch, this unique Vingt-8 is a memento of the owner’s home state of Minnesota and its port city of Duluth.

Spanning the canal that leads to the Port of Duluth, the Aerial Lift Bridge is a local landmark that can be raised to its full height of 135 feet in order to allow taller ships to pass underneath. Engraved entirely by hand, the dial depicts the Aerial Lift Bridge and a steamship sailing past. It forms the centrepiece of an elaborately decorated Vingt-8 that is also notably discreet in its serene blue and silver colours. 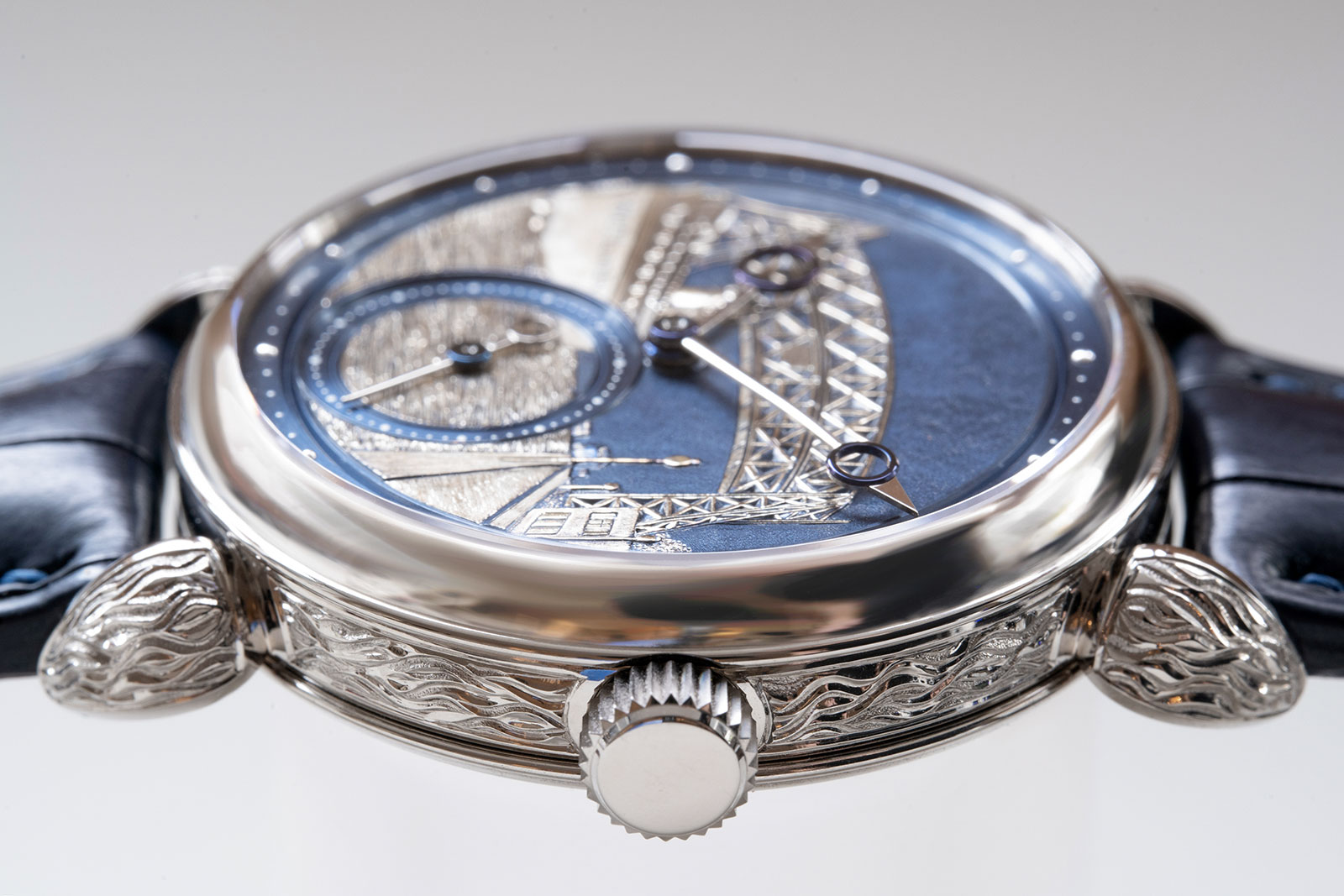 Though the owner now lives in a different state, Minnesota holds a special place in his heart. “We are Minnesota residents and have spent a lot of time in Duluth as a family over the years,” explains the owner, “It is one of the most beautiful and scenic places in the country, right on Lake Superior, the largest fresh water lake in the world.”

“I started thinking seriously about having an Aerial Lift Bridge watch made in 2016. I talked to several watch makers about the project but was not entirely happy with the concepts that I saw from them,” says the owner. “My dream was for Kari to make the watch, and after a few conversations, he agreed to make the watch for me in 2019.” 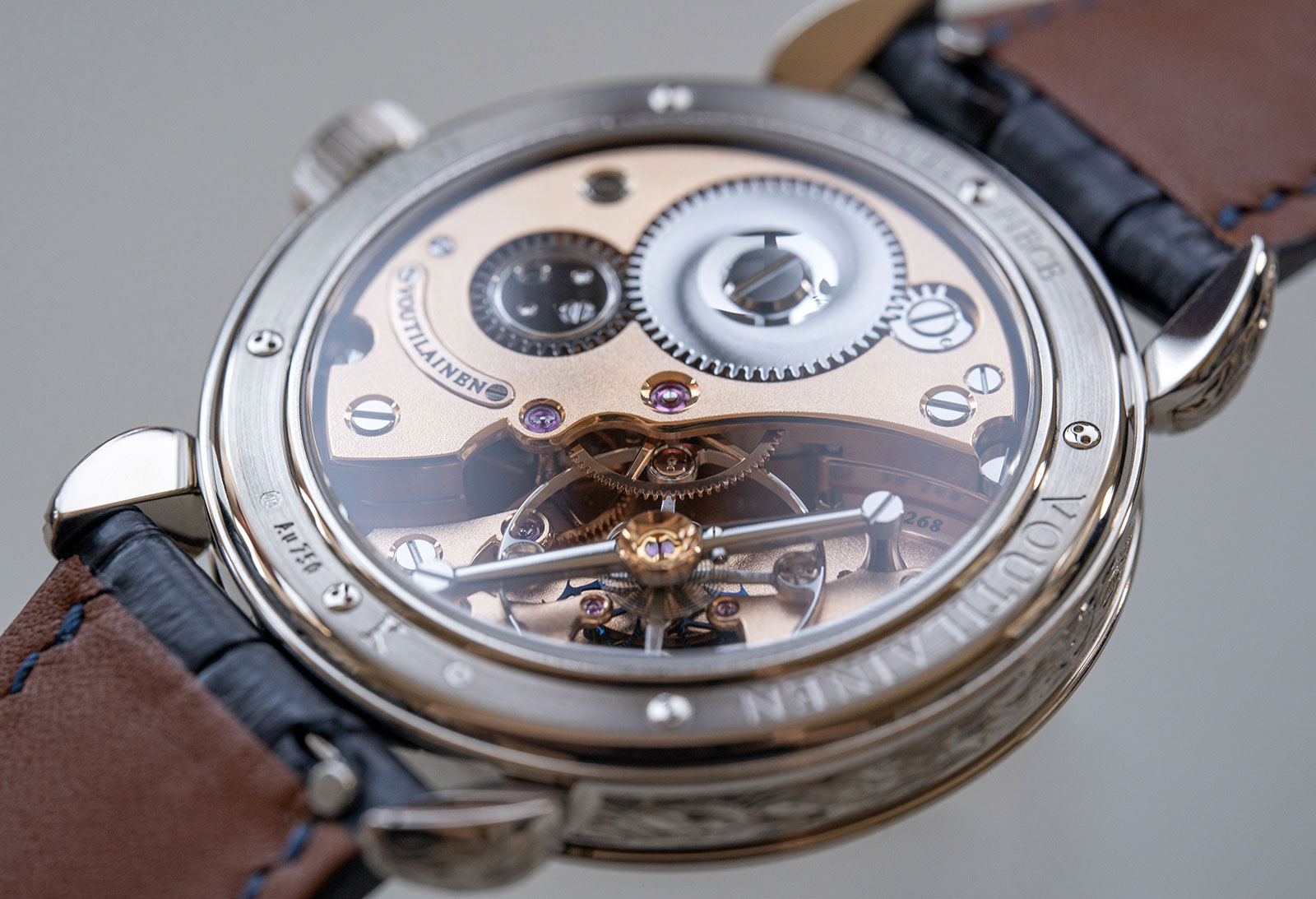 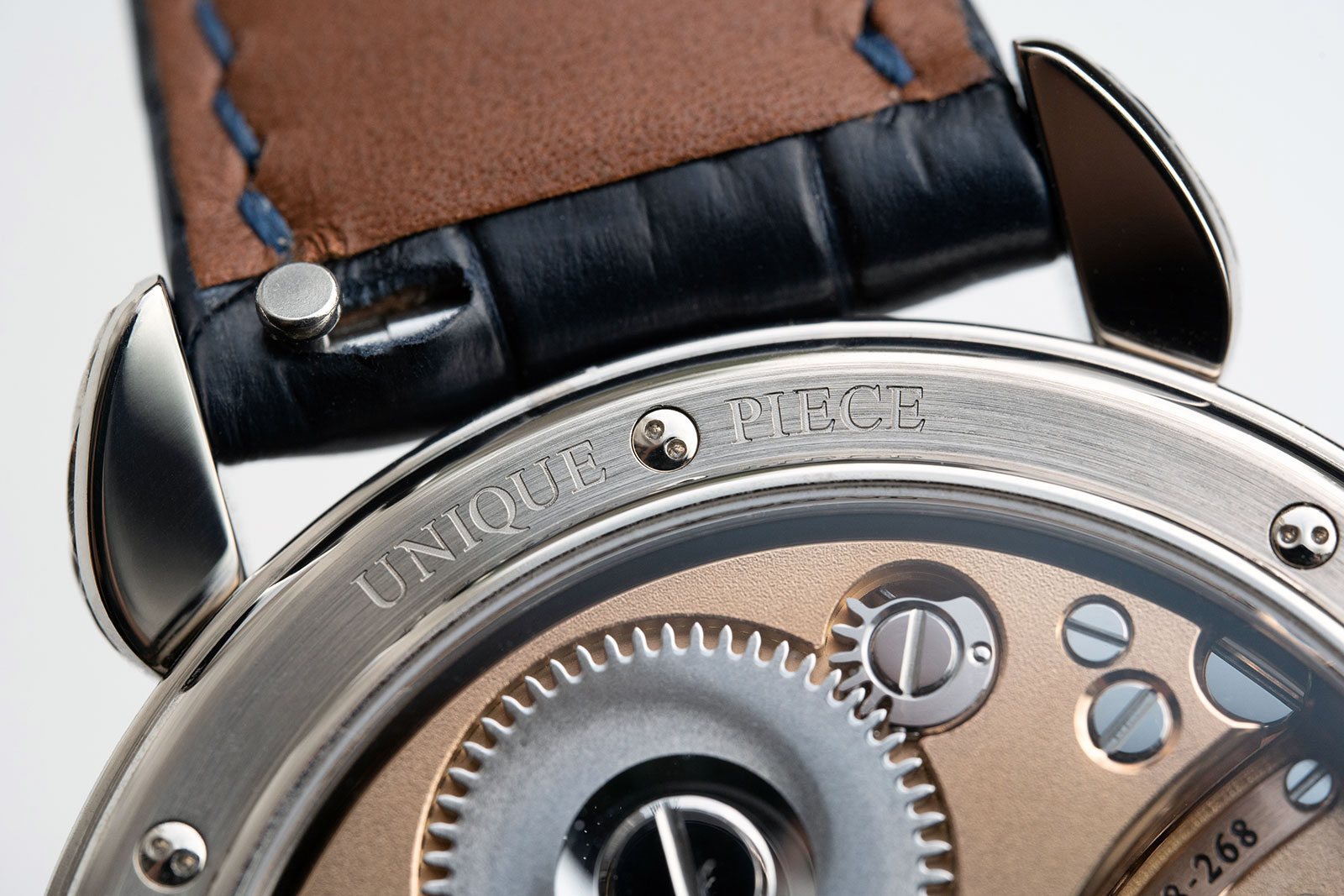 Delivered at the end of 2020, this custom Vingt-8 has a carefully executed dial with a passenger steamship slowly passing under the bridge – a scene rendered in exceptional detail. Made of silver with a galvanic coating to create the blue portions, the dial bears a miniaturised composite of several photographs taken by the owner.

“We first discussed placing the image inside a standard Vingt-8 dial, but we felt that would not do it justice,” the owner recounts, “So Kari suggested eliminating the chapter ring with the hours and only keep the outer minute track, which allowed us to use virtually the entire dial for the image.”

Although executed only in two colours – blue and silver – the engraving possesses texture, shading, and depth, reflecting the skill of the artisan, Yasmina Anti, who is one of Voutilainen’s go-to engravers (another being Eddy Jaquet). According to Kari Voutilainen, amongst the challenges in executing the dial was preserving the proportions and perspective of the image, while scaling it down. 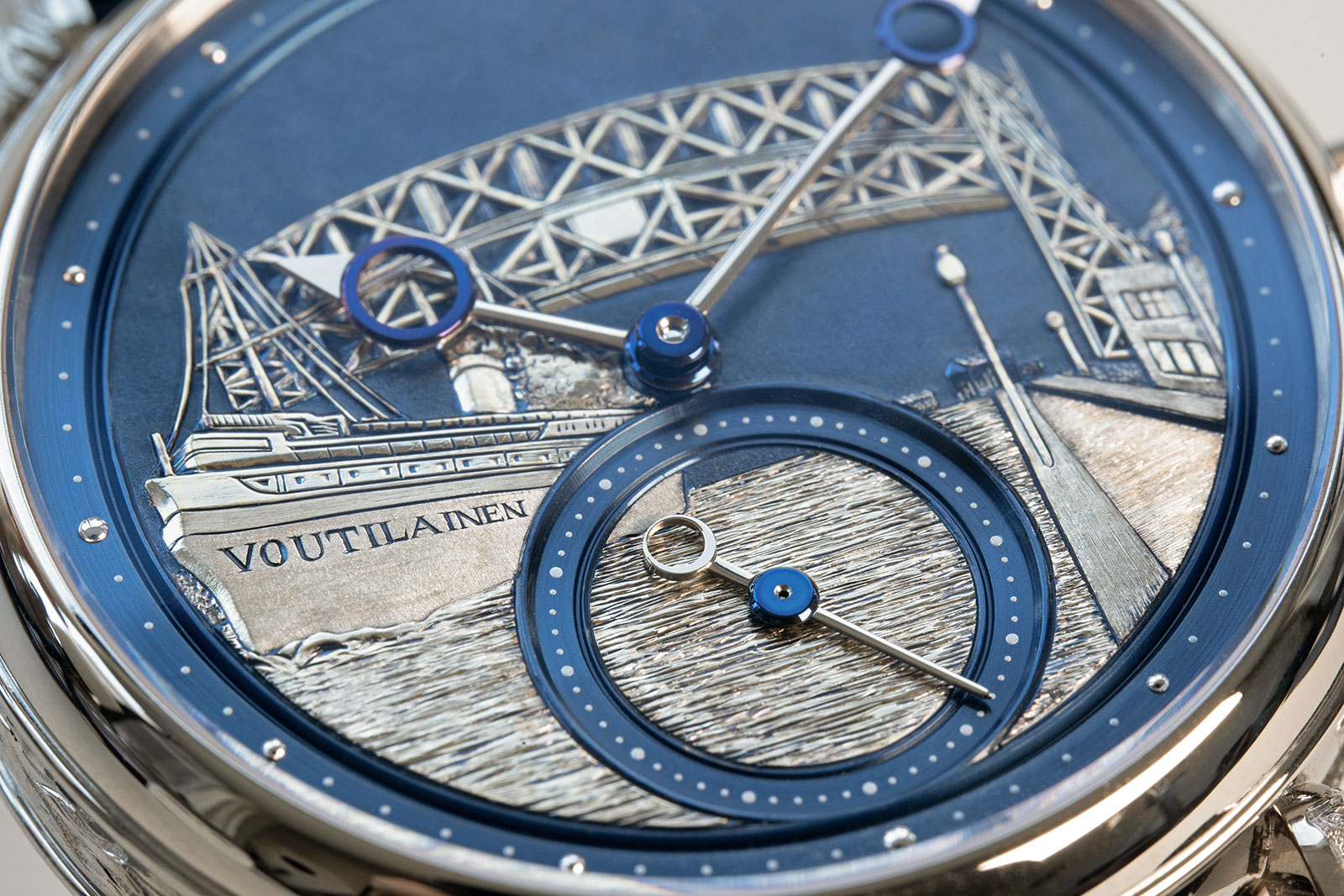 An independent engraver based in the village of Le Pont in the Vallee de Joux, Ms Anti also engraved the case with a stylised wave motif echoing the waters of the canal on the dial. The fully engraved case is extremely unusual for Voutilainen and perhaps the brand’s only recent watch decorated in this manner. But because only the lugs and sides are engraved – the domed bezel retains its typical polished finish – the case decoration is discreet on the wrist. 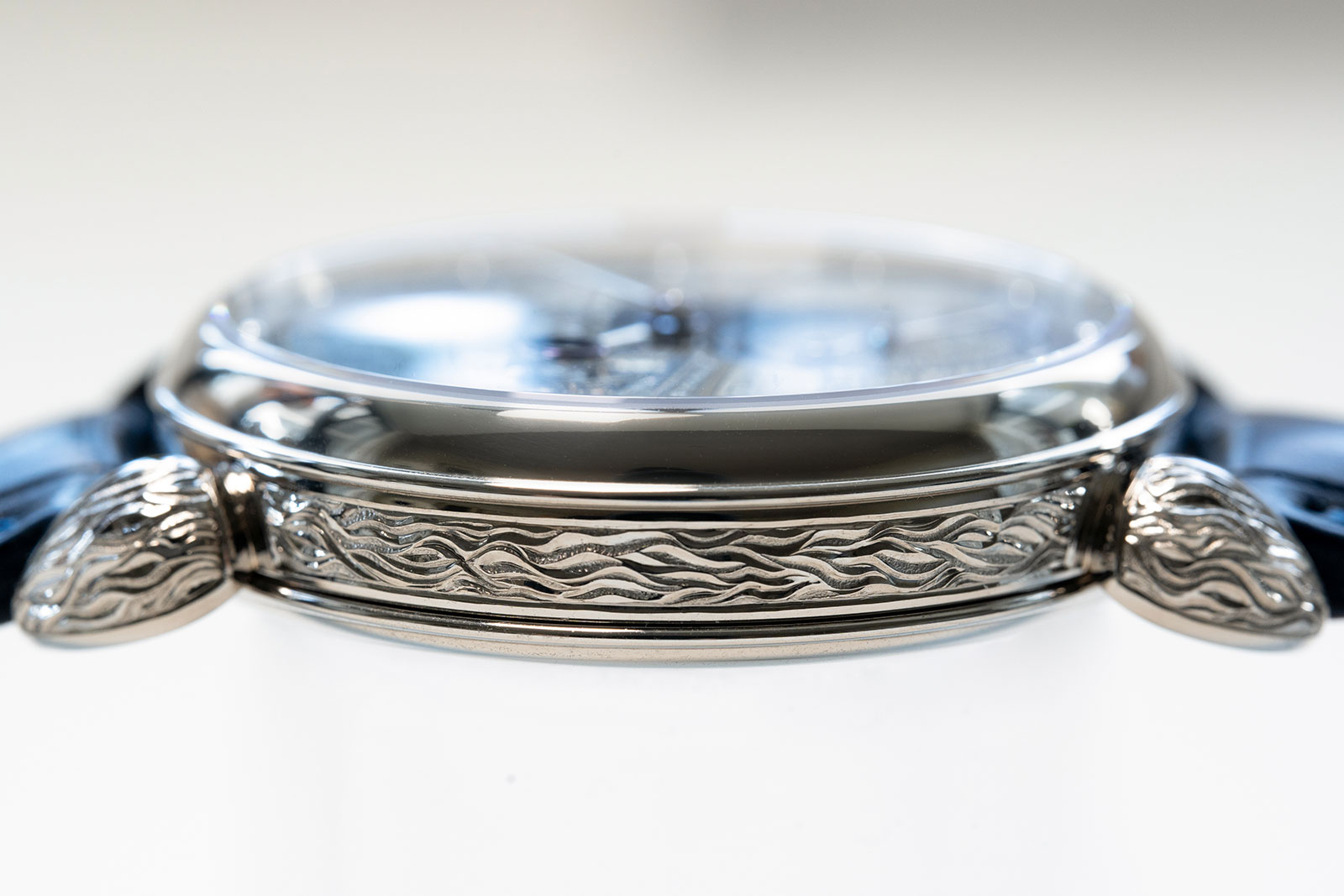 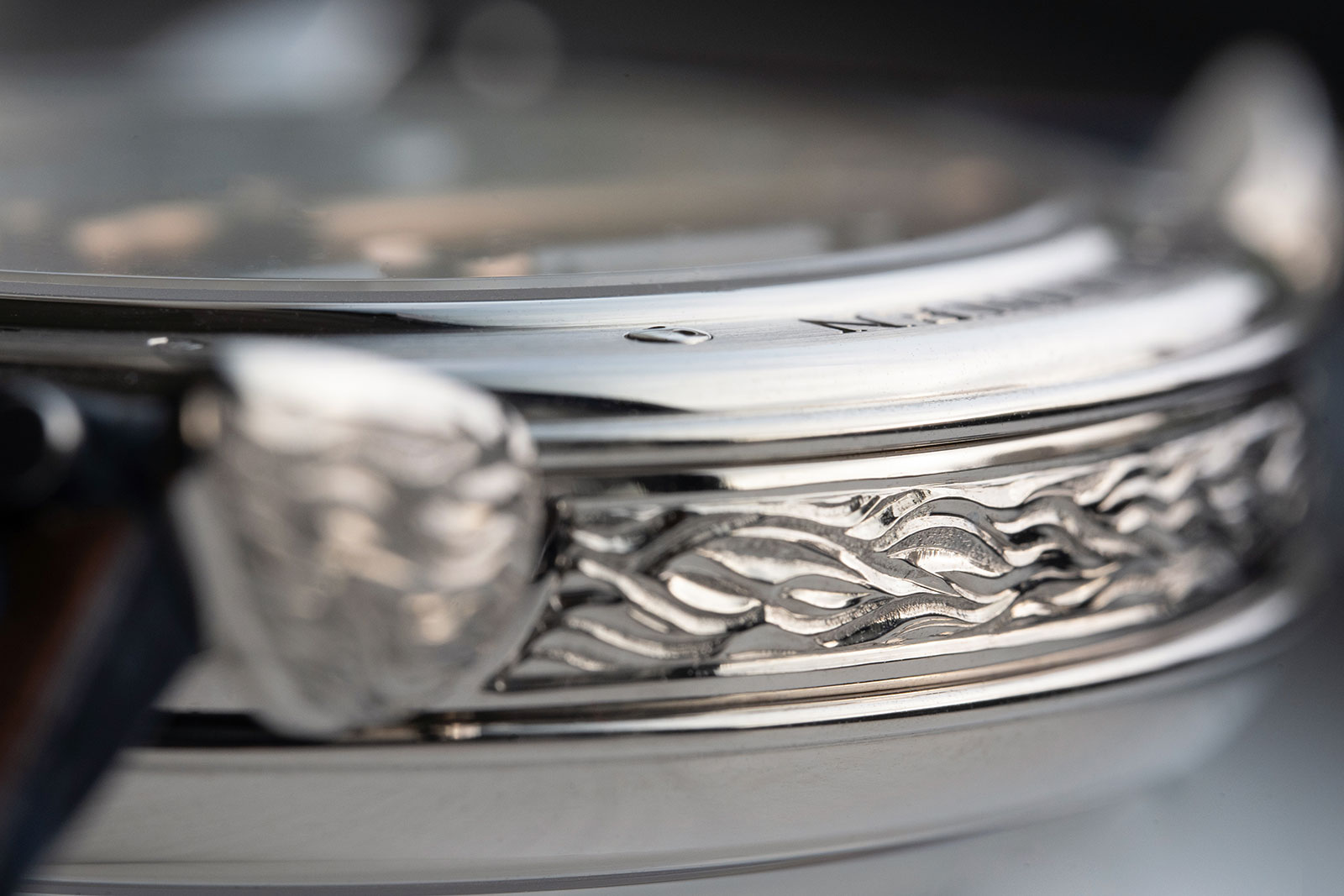 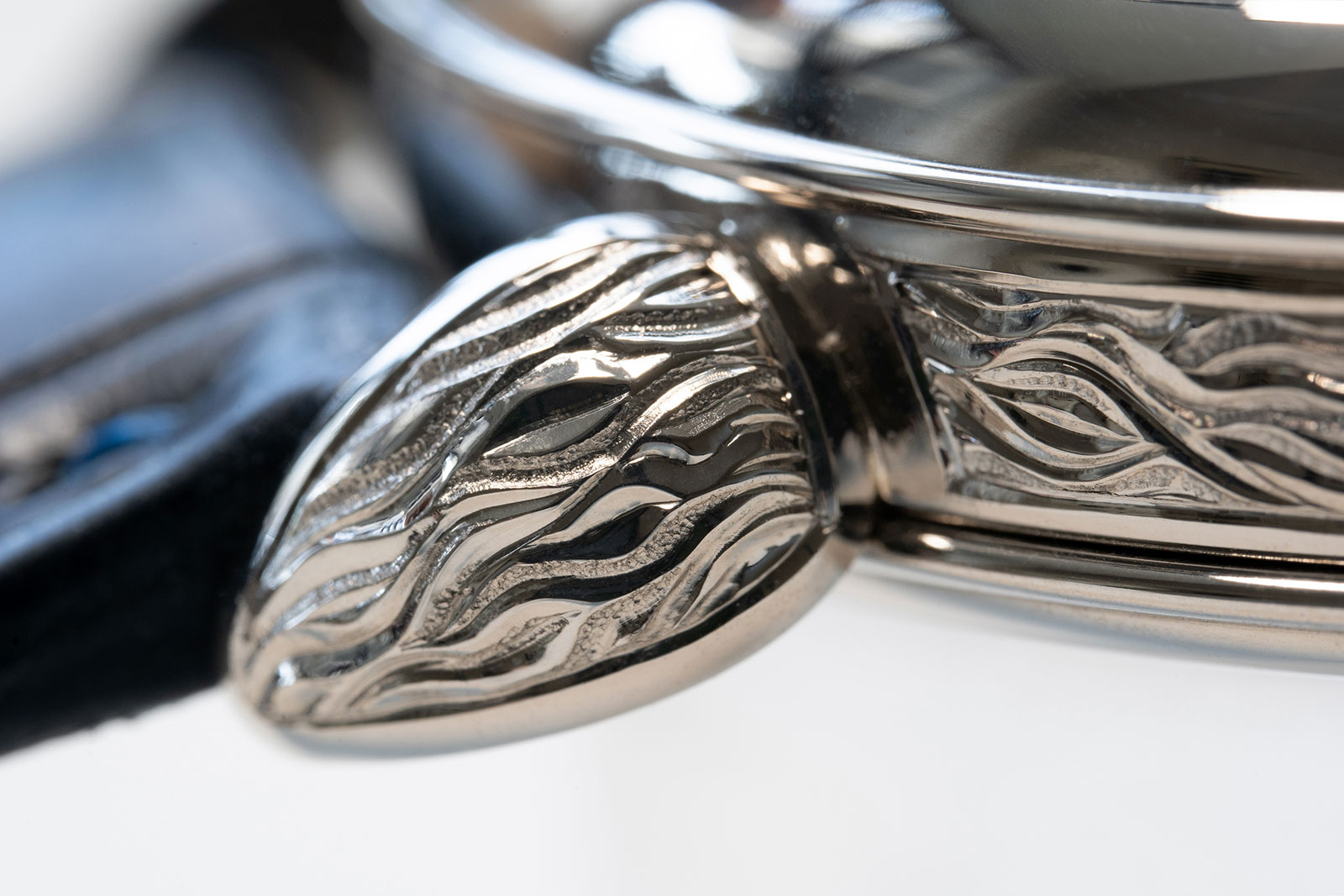 The wave pattern covers the sides of the case, as well as the teardrop lugs

The case is 18k white gold and 39 mm in diameter, exactly like the standard model. Inside is the latest version of the Voutilainen cal. 28 with a single, two-third plate as well as the trademark oversized balance wheel.

Unlike most examples of the cal. 28 that are finished with Geneva stripes and rhodium plating, the owner opted for frosted gilt, a restrained finish that brings to mind 19th century pocket watches. 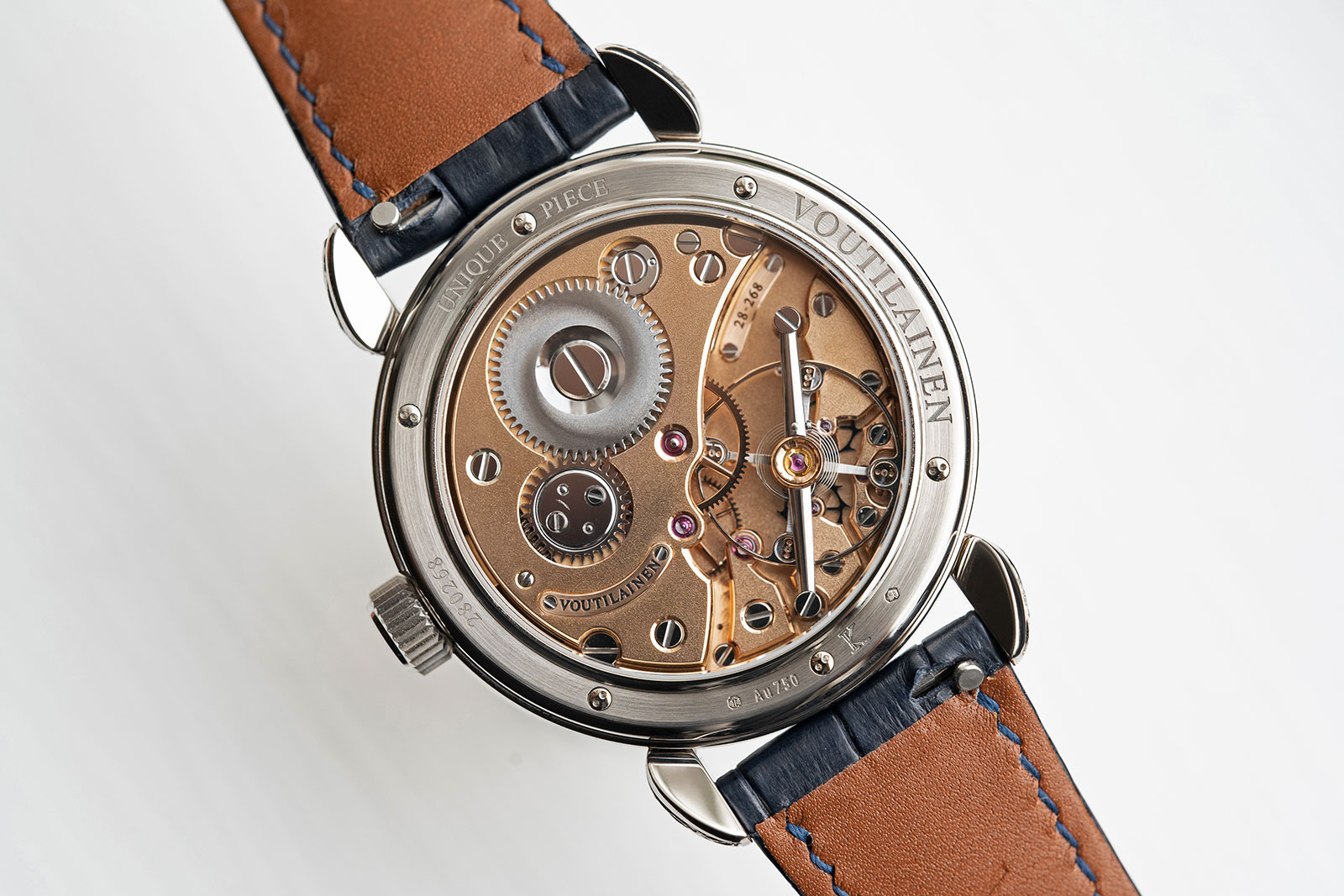 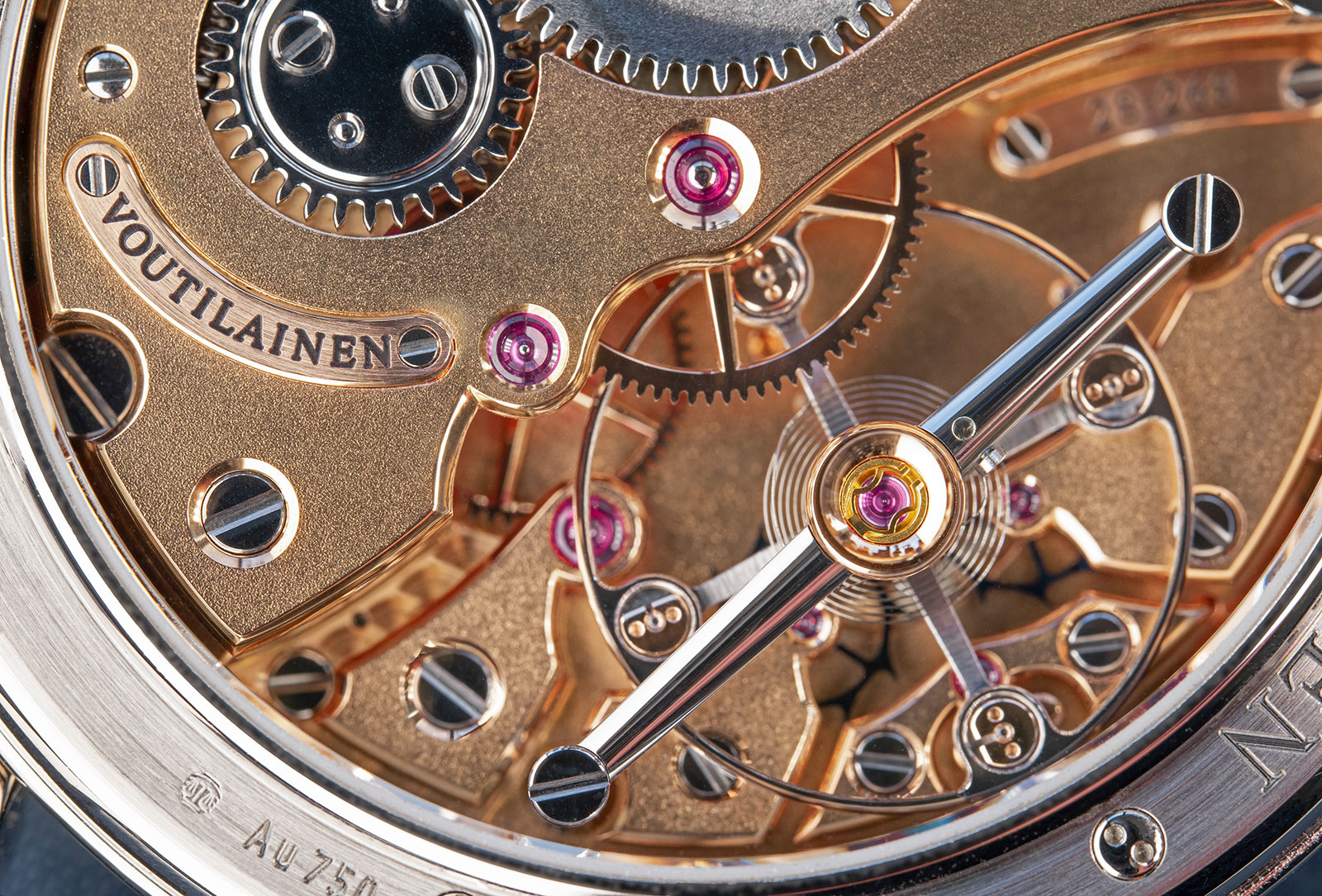 The adjustable-mass balance wheel, with the direct-impulse escapement and its double escape wheels just below

The Duluth Aerial Lift Bridge watch was a unique watch created upon commission, but similar custom orders start from around 140,000 Swiss francs.

Photos courtesy of Andrew Viny, whose work can be found on Instagram.