The largest watch retailer in the Middle East, Ahmed Seddiqi & Sons is celebrating its 70th anniversary this year. A family-owned business since its founding, Seddiqi is marking the occasion with several limited-edition watches, including the Bovet 19Thirty Dimier UAE Edition.

Based on the 19Thirty Dimier, a time-only wristwatch with a long, seven-day power reserve, the UAE Edition is dressed in a striking combination of black and yellow, with its most distinctive feature being an unusual take on the “California” dial. Instead of the usual Roman and Arabic numeral combination, its dial combines Hindu and Arabic numerals, in a nod to the culture of the region. Typically a classical-looking watch, the 19Thirty Dimier is very different in the UAE Edition. Recalling racing chronographs, the yellow and black livery is sporty, which works well with the simplified dial that removes some of the elements found on the standard version. The simpler dial design is appealing, although the white print on the base plate feels out of place against all that yellow; a consistent black-and-yellow theme throughout would have been a bit more pleasing.

Despite the bright colours, the 19Thirty Dimier is an elegantly-proportioned watch, with a fairly large case but one under 10 mm high. And it is powered by an in-house movement, which like all of Bovet’s movements, is well executed and technically interesting. 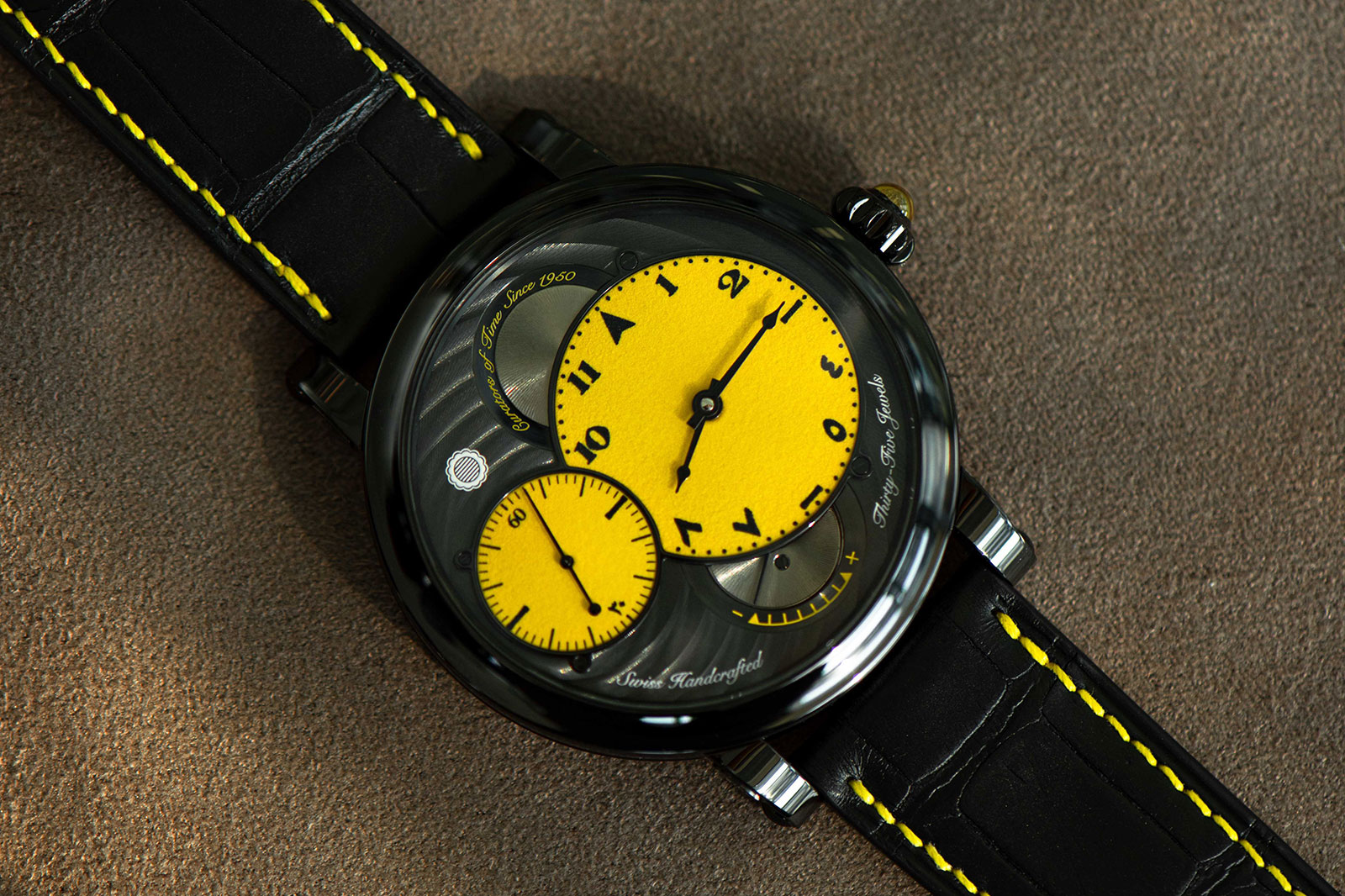 The cal. 15BM04 inside is simple in function – it has only the time and a power reserve indicator – but boasts several unusual features, including a near-symmetrical layout with an exposed going train, as well as Bovet’s proprietary balance wheel. All that helps explain the price – a bit over US$28,000 – which might seem high for a relatively simple watch, but acceptable given the movement, but more importantly, Bovet’s vertical integration and small output.

The UAE Edition has a 42 mm steel case that’s a slim 9.55 mm high, but because it’s coated in black diamond-like carbon (DLC) – a first for Bovet – the watch likely looks a little smaller on the wrist than the numbers indicate.

Rendered in bright, matte yellow with black markings, the dial layout is identical to the standard model in layout, but does away with many design elements for a cleaner look.

Most notably, the dial is devoid of the Bovet signature, and instead just has the brand’s flower emblem at 10 o’clock. Both the power reserve scale and seconds register have also been pared back, while Seddiqi’s motto is engraved on the upper barrel located at 12 o’clock. The UAE Edition is limited to 50 watches in a nod to the 50th National Day of the Emirates that happens in 2021. And each watch is accompanied by another item from local culture: a misbaha, or Islamic prayer beads, made of onyx and yellow jade.