Helmed by Pascal Raffy, Bovet is a small and independent brand that excels in timepieces that are ornate, original and eccentric – and often highly complicated. The modern-day philosophy of the brand echoes the brand’s origins in the 19th century when it was a leading purveyor of pocket watches to the Chinese market.

This year, Bovet furthers its distinctive expression of watchmaking with the Récital 26 Brainstorm Chapter Two. Features an imposing but transparent sapphire case with a sloped, “writing desk” profile, the watch is equipped with a host of complications, from a flying tourbillon to a three-dimensional moon phase. And despite the name, Brainstorm Chapter Two is not just a sequel to the Brainstorm Chapter One, but is more like a newly-conceived watch.

Immediately eye-catching, the sapphire case has a very unconventional inclined shape. Introduced in 2016, the form takes after the traditional sloped-top writing desk and is now a signature Bovet design.

While transparent sapphire cases are not new – they are in fact commonplace today with watches with several launched this year, including the Hublot Big Bang Unico Sapphire and the Chanel J12 X-Ray – the Bovet case is unusual in form. It is not entirely sapphire, however, and instead made up of a titanium frame of the case back and lugs, with the sapphire case middle and front mounted on the frame. 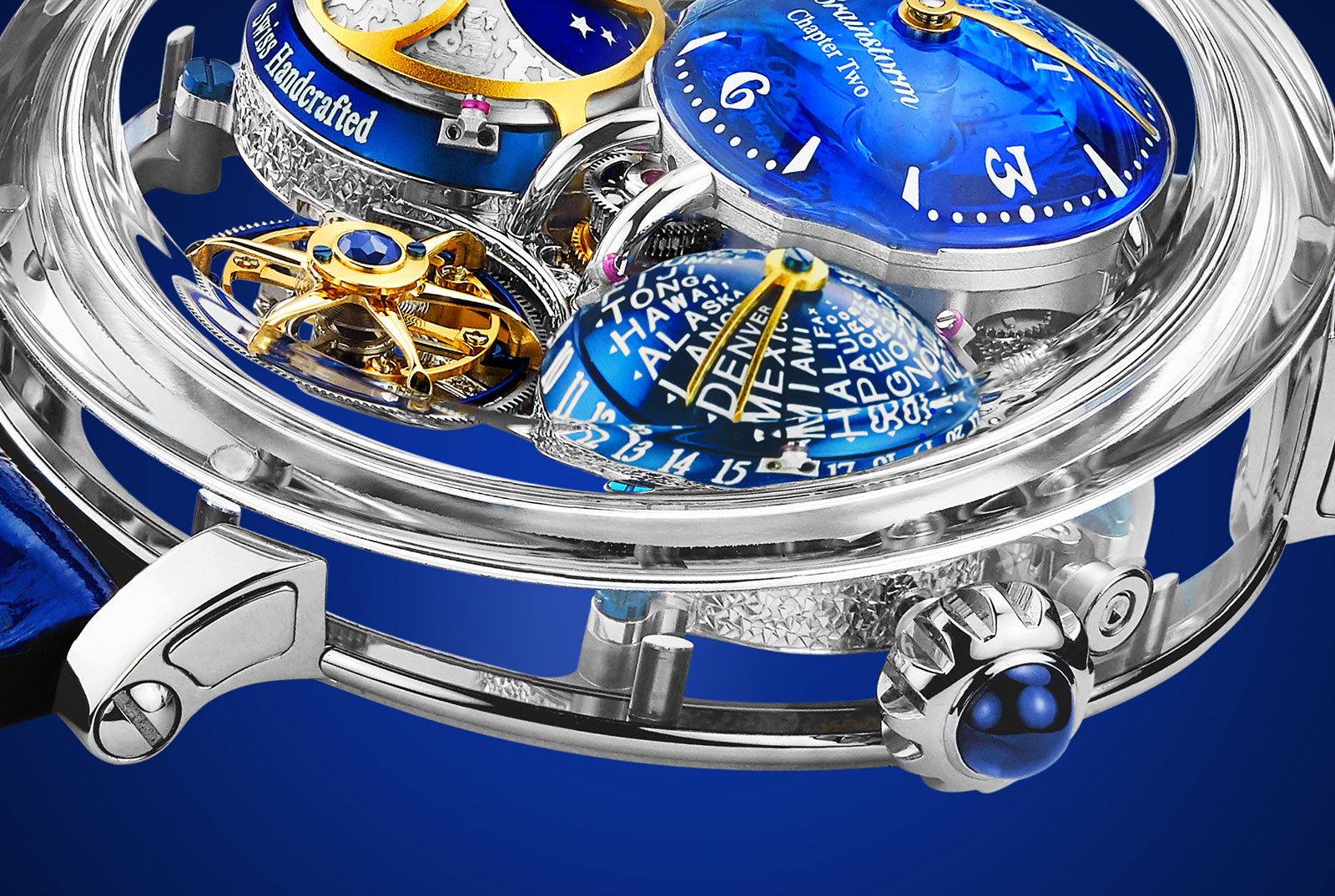 Though fashionable, the material make senses here. Instead of being eccentric for the sake of it, the sloped case is key for the open, architectural look of the movement. Viewed straight-on from the top, the watch appears round. But from the side, the depth and three dimensionality of the movement is revealed, which no doubt makes for an engaging viewing experience.

But like many Bovet complications, the Brainstorm Chapter Two is a large watch. With a diameter of 47.8 mm, wearability is probably not that ideal, especially given the fragility of sapphire, which can chip or crack if dropped or knocked very hard. In many ways it is a technical and decorative object for the wrist, rather than a daily-wear wristwatch.

Belly of the beast

A transparent sapphire case would be pointless if the internals are not done well, which they definitely are. Though Bovet’s over-the-top style might not to be everyone’s taste, the heavily decorated movements are typically executed to a high level.

Inside is the cal. 17DM06-DT that has an impressive five-day power reserve on a single barrel, despite all the complications. The clear sapphire case provides an unobstructed view of the movement from all angles. Seen face-on, the complications form a very symmetrical and attractive look. But at an angle the architectural form of the movement reveals itself, allowing the wearer to appreciate its multilayered construction and depth.

Interestingly, to take advantage of the transparent sapphire case, Bovet fixed the movement against the case back rather with lateral pins as is conventional, creating the impression the movement is rising out of the back and floating.

The power reserve indicator is positioned in between the lugs

The domed dial at nine o’clock contains the double-hemisphere moon phase, which has a hand-engraved, lunar-surface texture filled with luminescence.

The sub-dial at top shows local time, while the dial at three o’clock has the cities disc and 24-hour scale for the world time and second time zone indicator.

Both the moon phase and time zone displays are each driven by three ruby rollers on their external circumference, allowing the domes to be hollow and light, which means they require relatively less energy to rotate.

At six sits the double-sided flying tourbillon. It’s a conventional 60-second tourbillon, but constructed so it is “flying” on both sides, with no bridge over the tourbillon on either face. 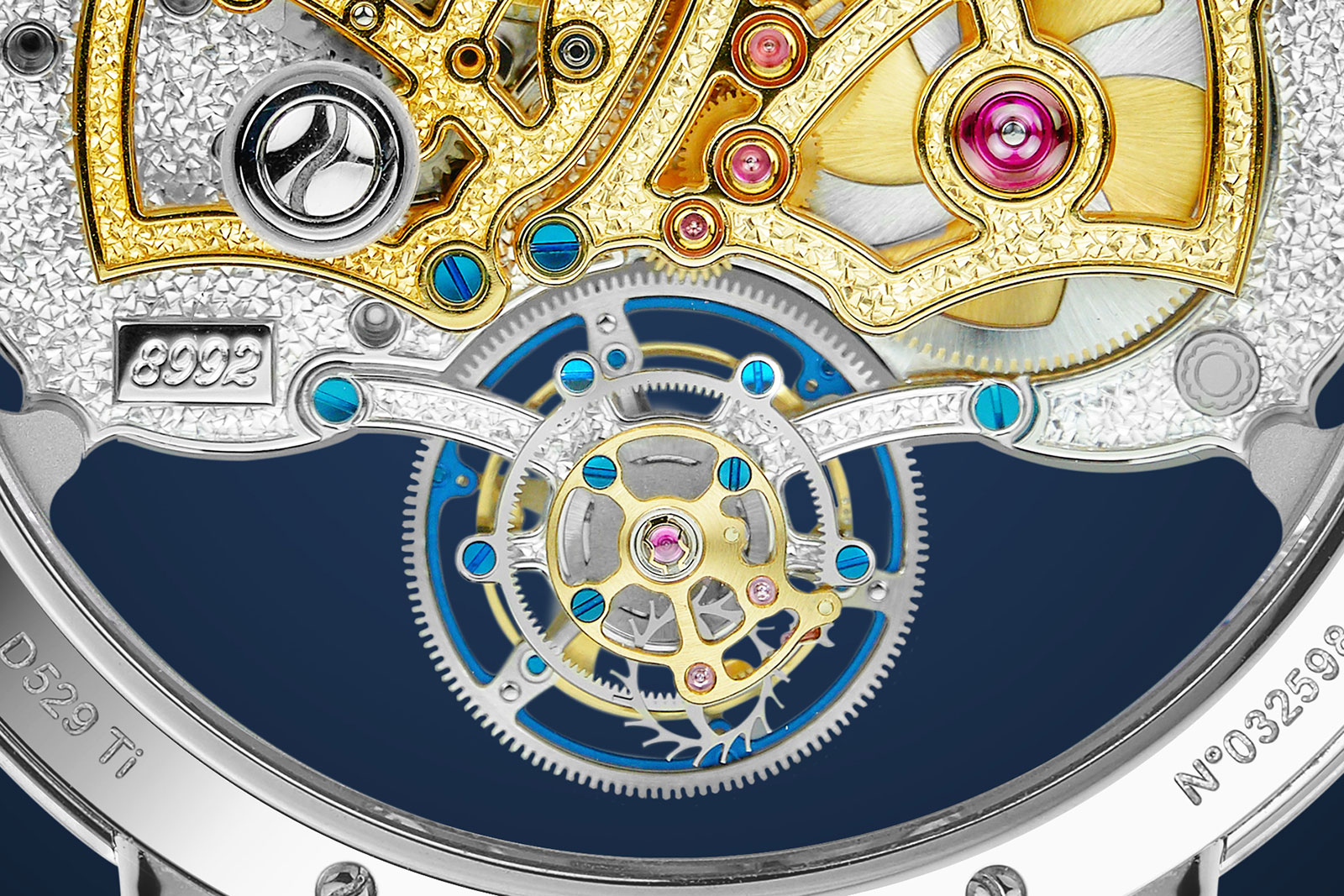 The tourbillon from the back

And as expected from Bovet, the finishing of the movement is exquisite, with the brand’s signature “broken glass” texture hand-engraved on the bridges, which are further dressed up with blued steel screws and contrast-colour plating.