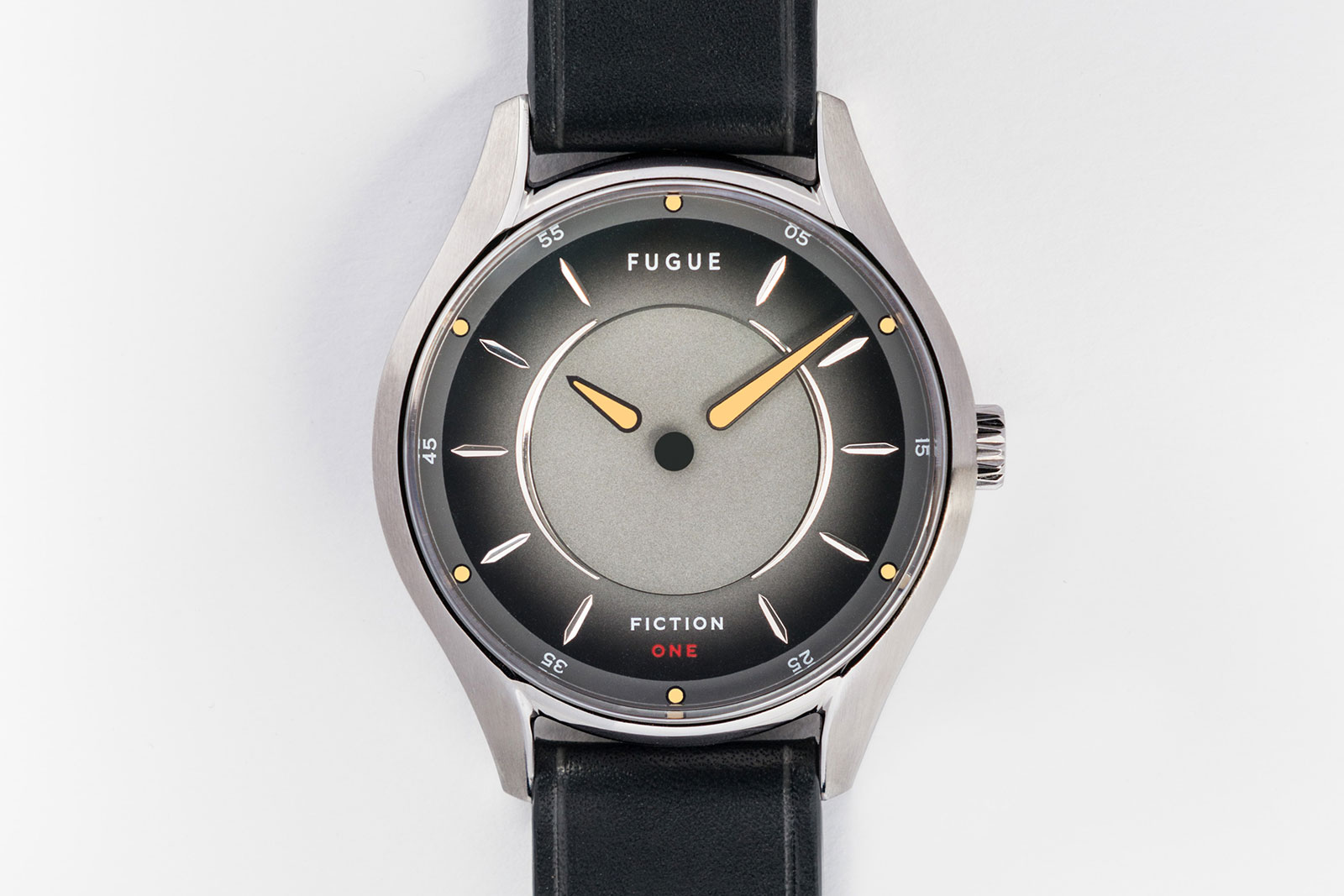 Founded just three years ago, Fugue got its start with a watch featuring a modular case with interchangeable lugs. The brand’s second model is altogether more interesting, the Fiction One.

Powered by an automatic Sellita movement, the Fiction One has an intriguing mystery dial – the hands appear to be floating over its surface with no connection to the central axis. Available for pre-order on crowdfunding platform Kickstarter until end October, the Fiction One is available in two dial variations, white and smoked grey. And it is affordable, with a price of €350, or about US$420.

[Update December 10, 2020: The original Kickstarter campaign for the watch did not meet its target, but Fugue is doing it a second time, offering the watch at a slightly lower price, as well as a smaller minimum quantity. The new campaign closes January 8, 2021.] 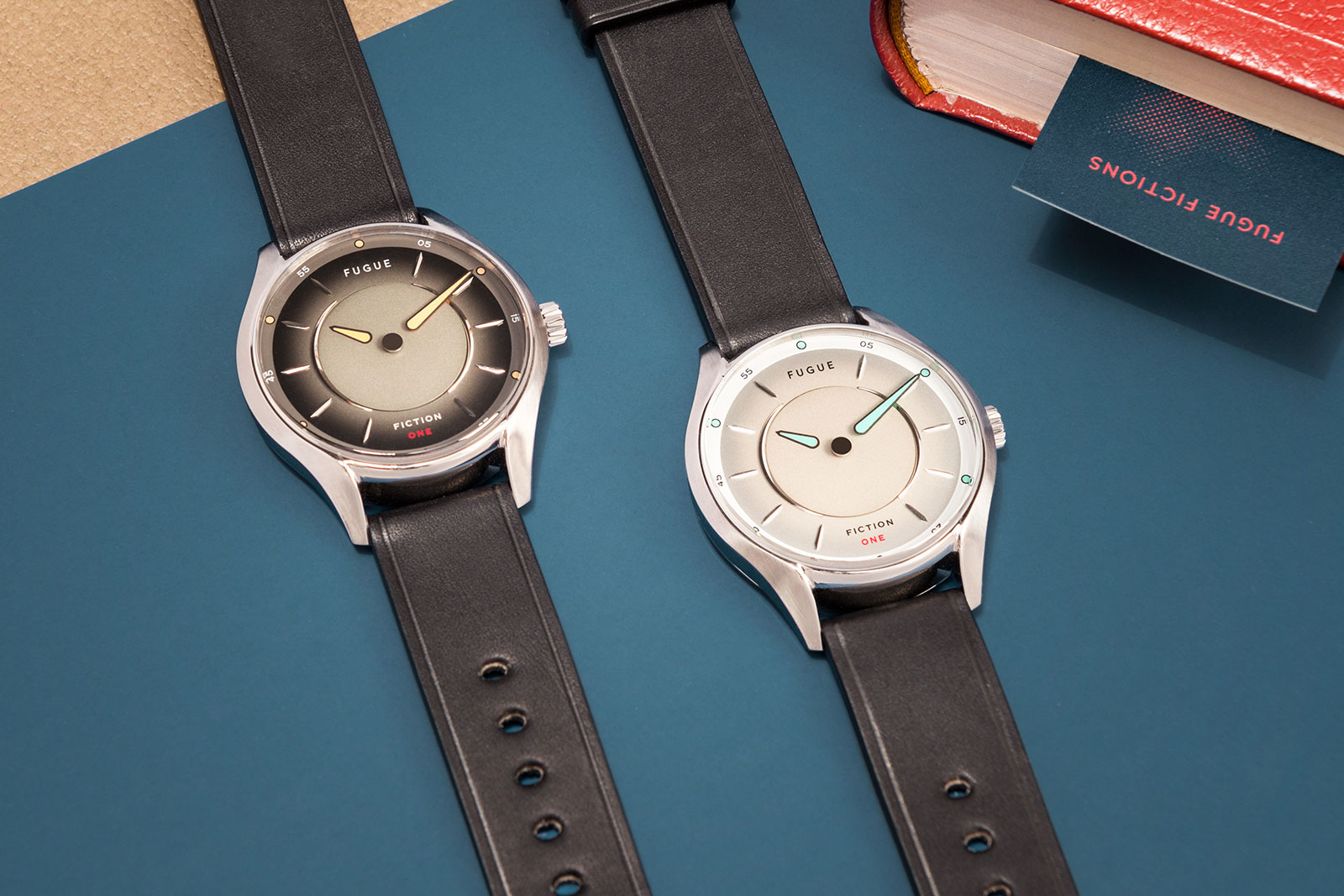 “Microbrands” tend to capitalise on designs that are the flavour of the day, reusing classic sports-watch designs for affordable watches. So amidst its crowdfunded peers, the Fiction One is refreshing.

That said, the mystery time display is an old invention, dating to early 19th century when it was invented by French magician Jean-Eugène Robert Houdin.And in the mid 20th century, the Galaxy watch with mystery hands was produced by several brands, most notably LeCoultre, Vacheron Constantin, and Longines.

Fugue takes inspiration from those wristwatches, successfully reinterpreting the idea to create something modern and affordable. The Fiction One has a clean and simple dial, maximising the floating effect, and the case is classically sized at 38 mm, giving it versatile, timeless proportions. 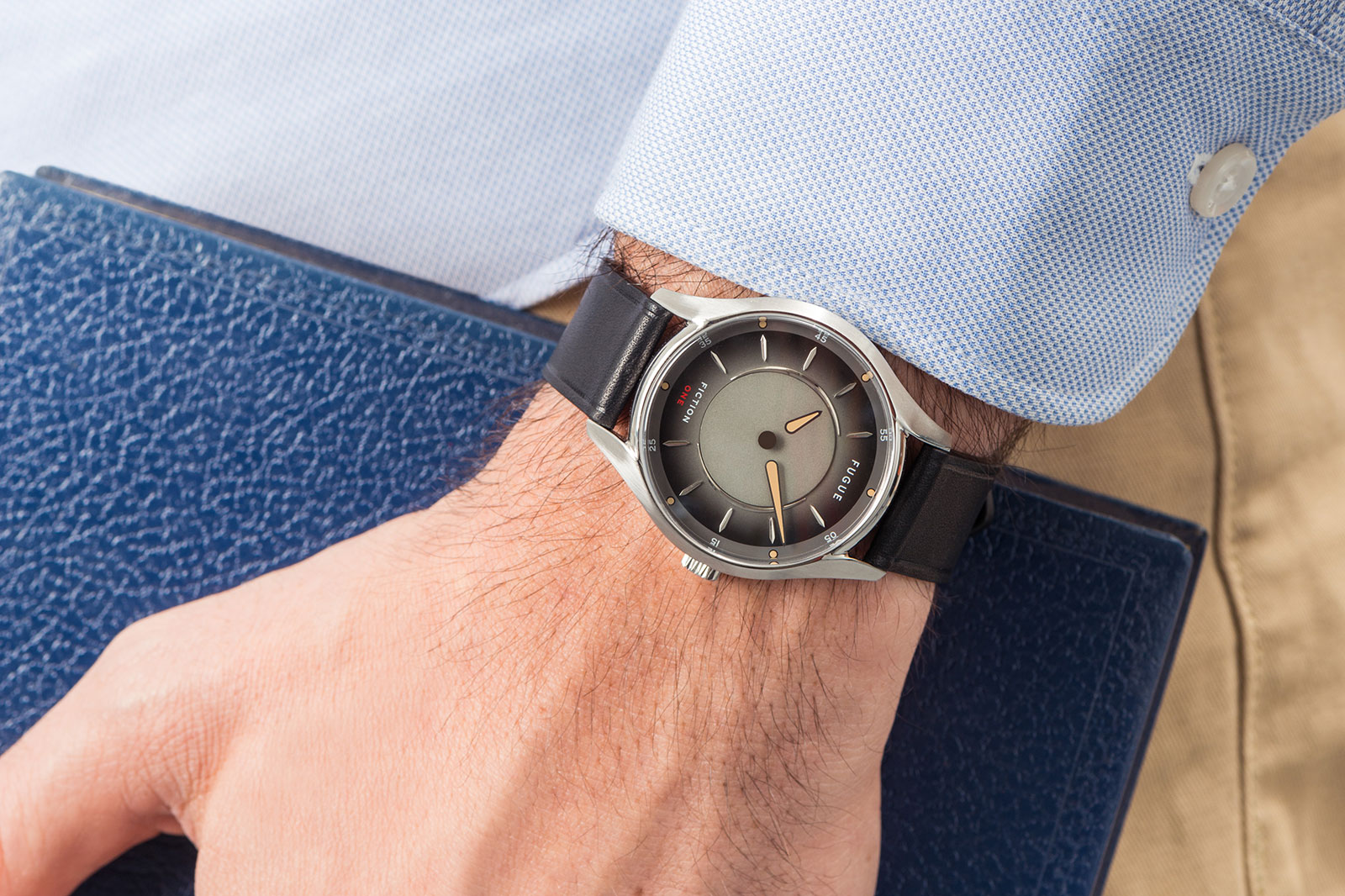 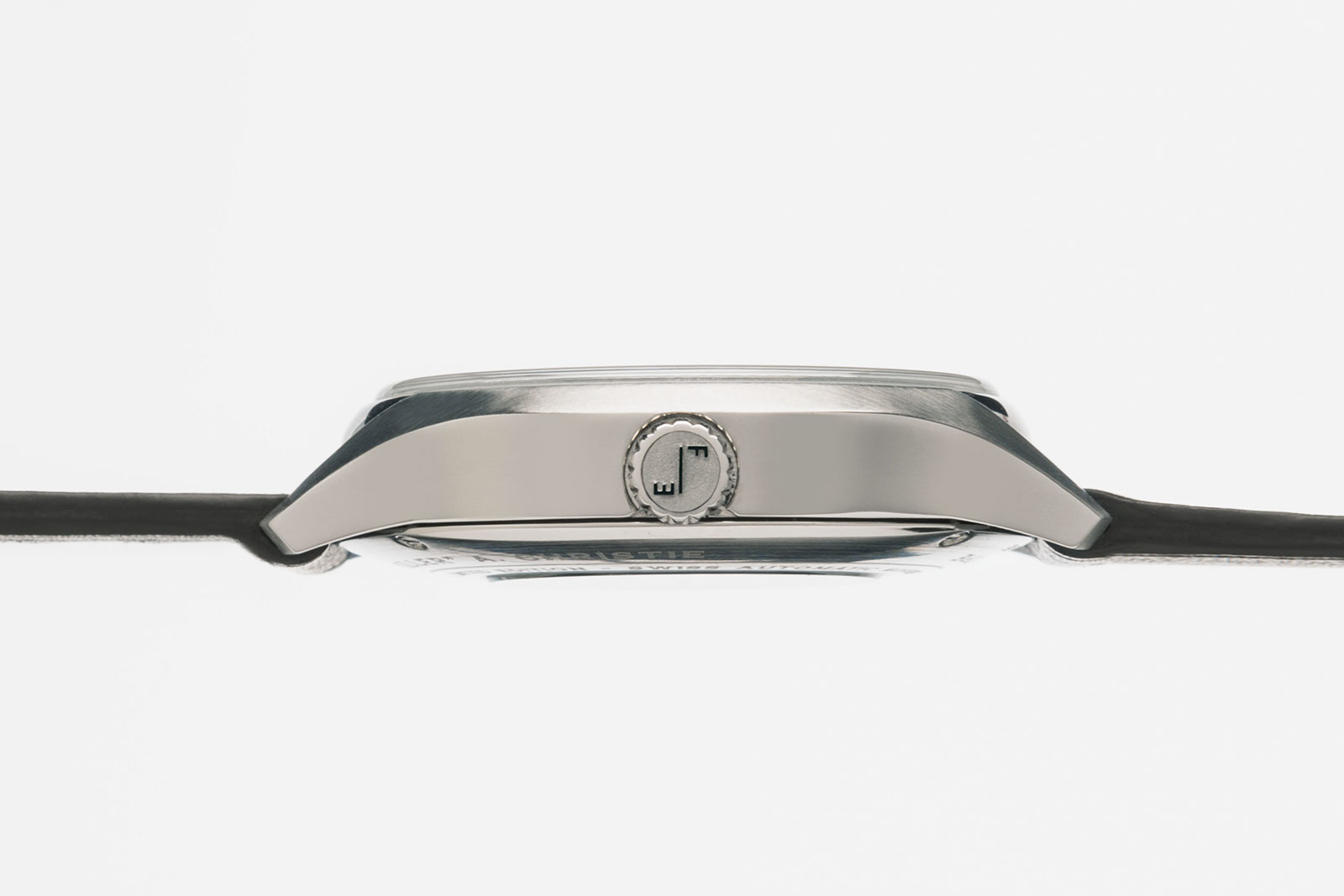 But more importantly, the Fiction One is priced very accessibly at €350. The initial pre-order price of €295 was even better but is unfortunately sold out. It’s an attractive, entry-level option for a mystery dial, especially compared to the admittedly far more sophisticated mystery complications from Cartier and Konstantin Chaykin. 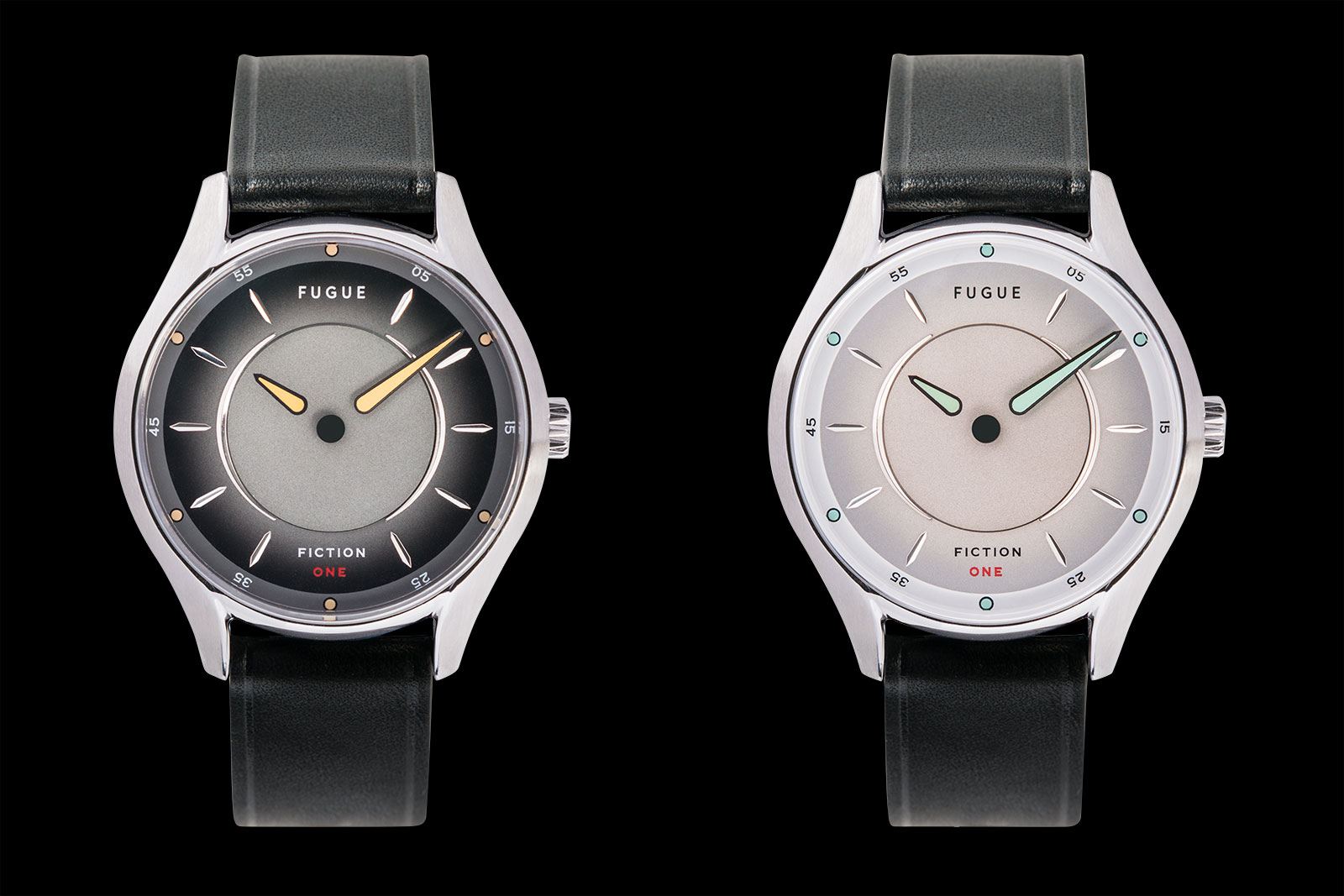 While the dial suggests a violation of the law of physics, it is a charming and effective construction that evokes the mysterious display in a simple manner.

Unlike the high-end mystery watches from the likes of Cartier and Konstantin Chaykin that have movements built from the ground up as mystery displays – floating hands with with a totally see-through dial – the Fiction One relies on one half of the trick: painting the hands on transparent discs that are driven by the movement. 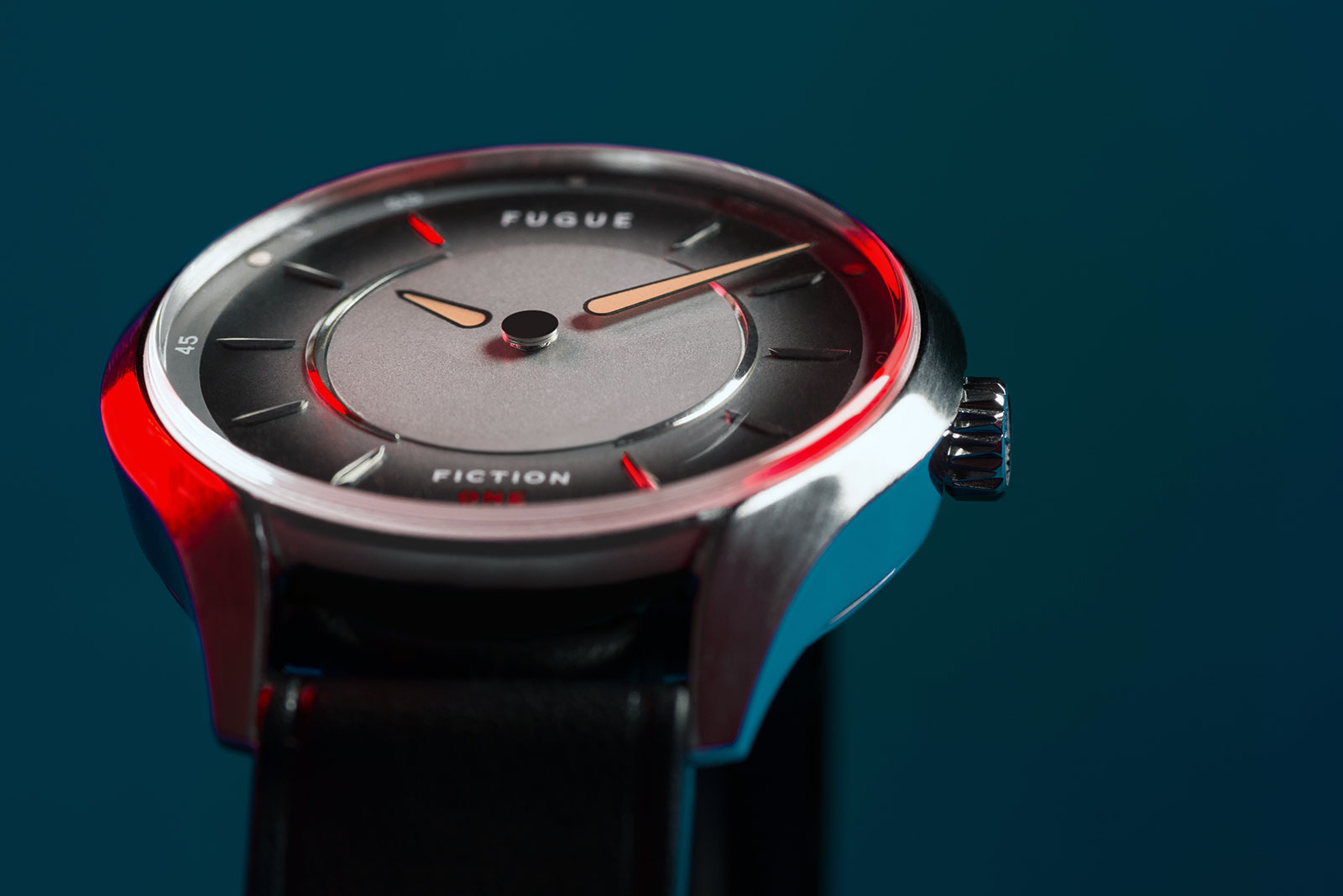 The mysterious effect is achieved with twin discs. At the bottom is an opaque disk the same colour as the dial, which carries the hour hand. Above it is a transparent disk, and then yet another transparent disk with the minute hand.

Having an additional clear layer between the two hands enhance the visual effect: not only are the hour and minute hand are detached from the central axis, they also appear to be on separate planes vertically. 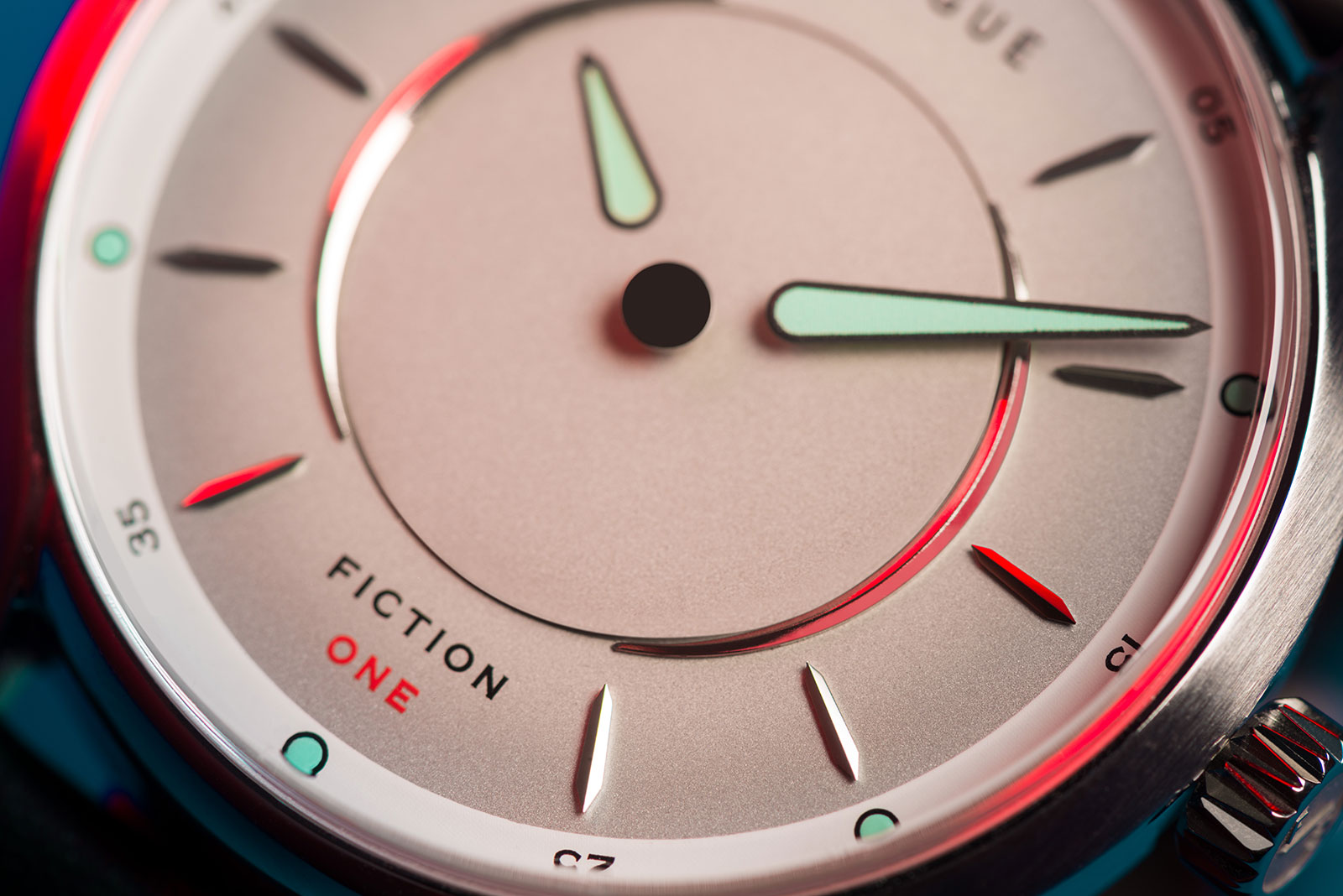 As with mystery clocks of old, the trick lies in the teeth on the rotating discs. In the Fugue One the teeth are on the inner axis of the discs, and mesh with the canon pinion of the movement, allowing the movement to drive the discs.

The movement is a Sellita SW200, a clone of the ETA 2824. It’s robust, reliable and easy to fix. The movement is made in Switzerland, along with some other components, but the watch is assembled in Fugue’s home country of France.

And up to 4% of the revenue generated by the Fugue One will be donated to Bibliothèques Sans Frontières (Libraries Without Borders), a charity that brings books and educational resources to people in poor countries. 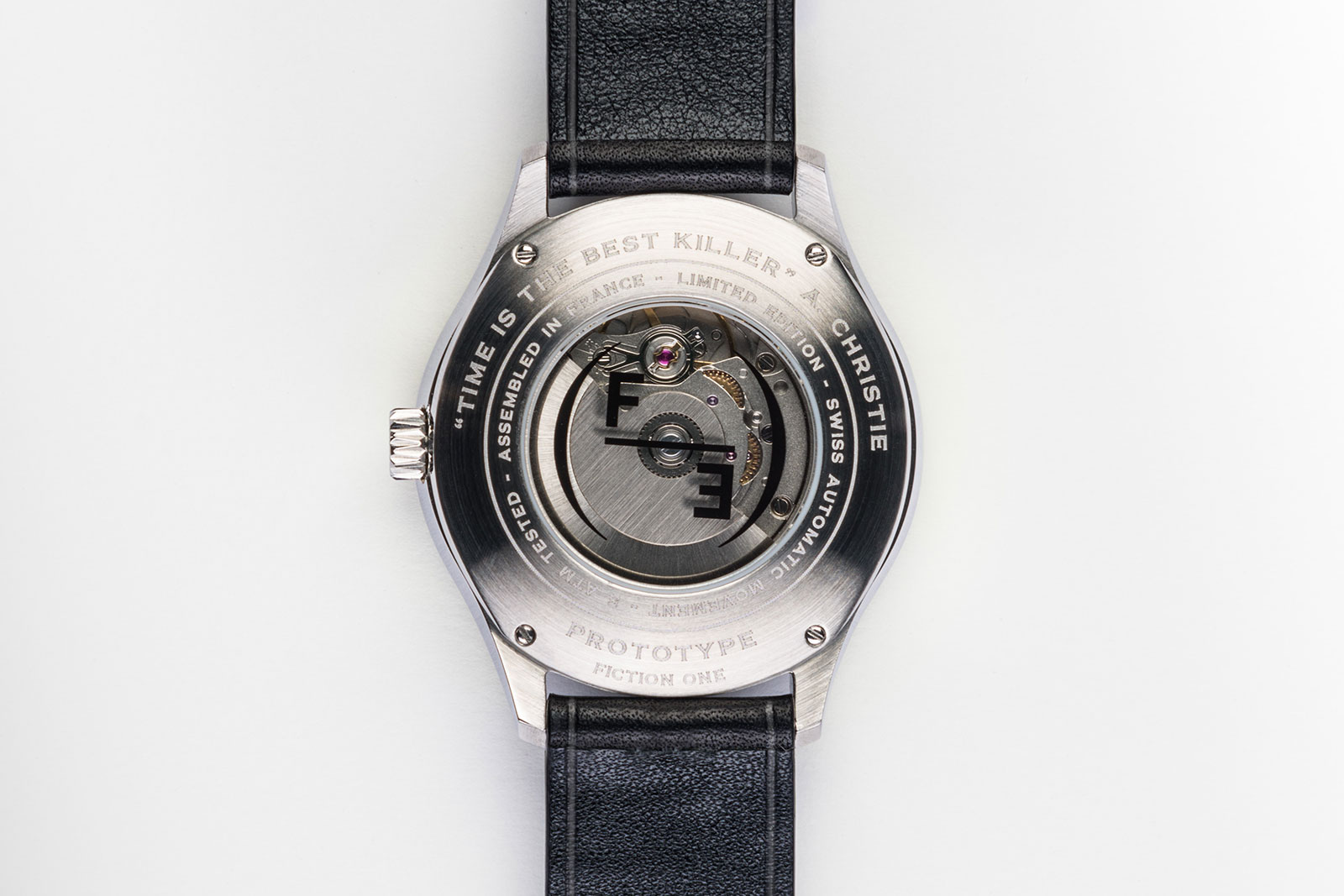 Limited edition: 610 pieces initially
Availability: Pre-order on Kickstarter until January 8, 2021
Price: €350 for either model; €650 for both