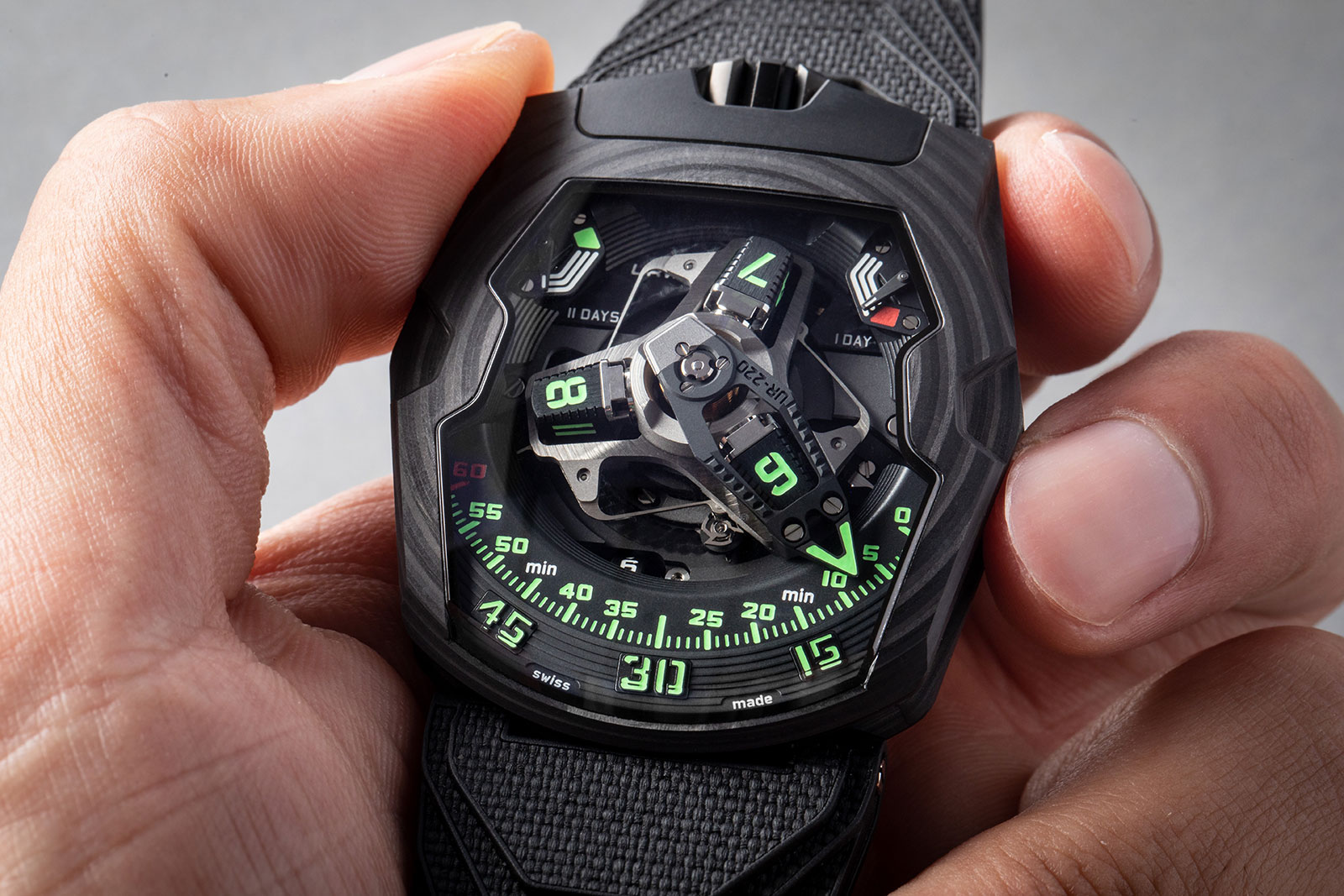 Urwerk has just revealed the next generation of its flagship wristwatch – the UR-220 “Falcon Project”. Retaining the same case shape and signature satellite-cube hour display as its predecessor, the UR-210, the “Falcon Project” is nonetheless an entirely different watch.

The UR-220 is powered by a newly-developed movement that hand-wound, instead of automatic as before, and in a first for the brand, the case is made of carbon composite, matched with a rubber-carbon composite strap.

A landmark in avant-garde independent watchmaking for its three-dimensional wandering hours, the UR-201 evolved into the UR-203 and then the UR-210. The new UR-220 is an incremental improvement in the same vein, though a substantial one. I had hoped for a brand-new time display to succeed the satellite-cube indicator, but that is perhaps something for the distant future. Even though the UR-220 retains the same general aesthetic on the front, it is fundamentally different mechanically. The movement has been substantially reengineered – the base remains the Zenith Elite calibre in the UR-210 but now minus automatic mechanism – and now incorporates new functions like the cylindrical service indicator.

It also sees the addition of a split power-reserve display, which Urwerk says was a complex mechanism requiring 83 parts. While that may be true, it feels unnecessary, except to give the face a symmetrical layout. 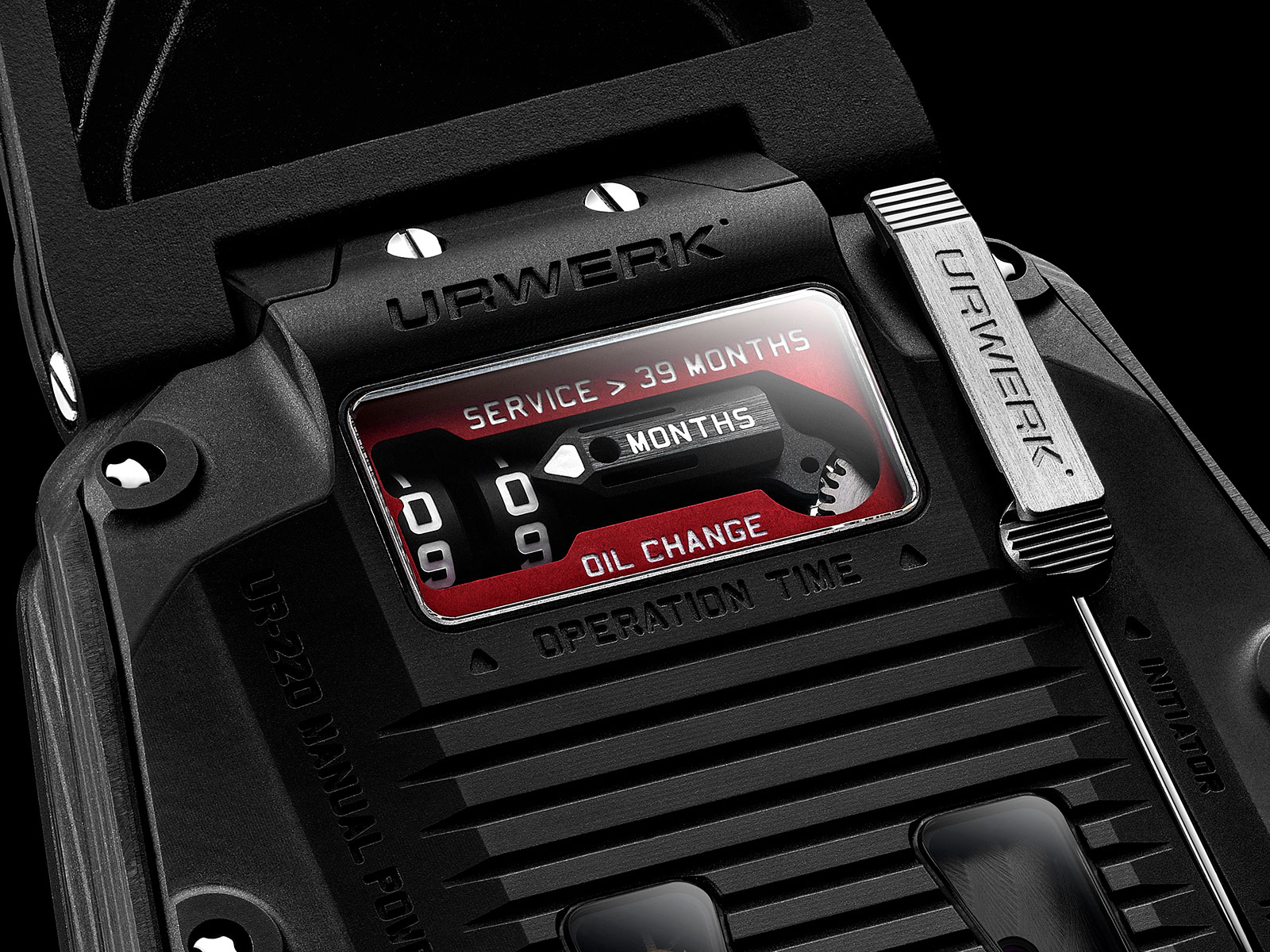 But one of the most significant changes is the case material. Urwerk watches have always been heavy, even in titanium. Combined with the large and angular cases, that made for so-so ergonomics at best.

Carbon composite is no longer novel, being very common, but its use for the UR-220 case makes sense. The lightweight case, along with the stiff and snug-fitting strap, should make the UR-220 the most comfortable Urwerk to date. Return of the “instrument panel”

The dial retains the familiar layout of the earlier generation. Hours are indicated by three rotating cubes, and minutes a retrograde hand tipped in a large, luminous arrow.

An important, but subtle tweak, in the time display lies in the typography – Urwerk cofounder Martin Frei created a new stencil-like font with a sci-fi-military style that matches the look of the watch perfectly. 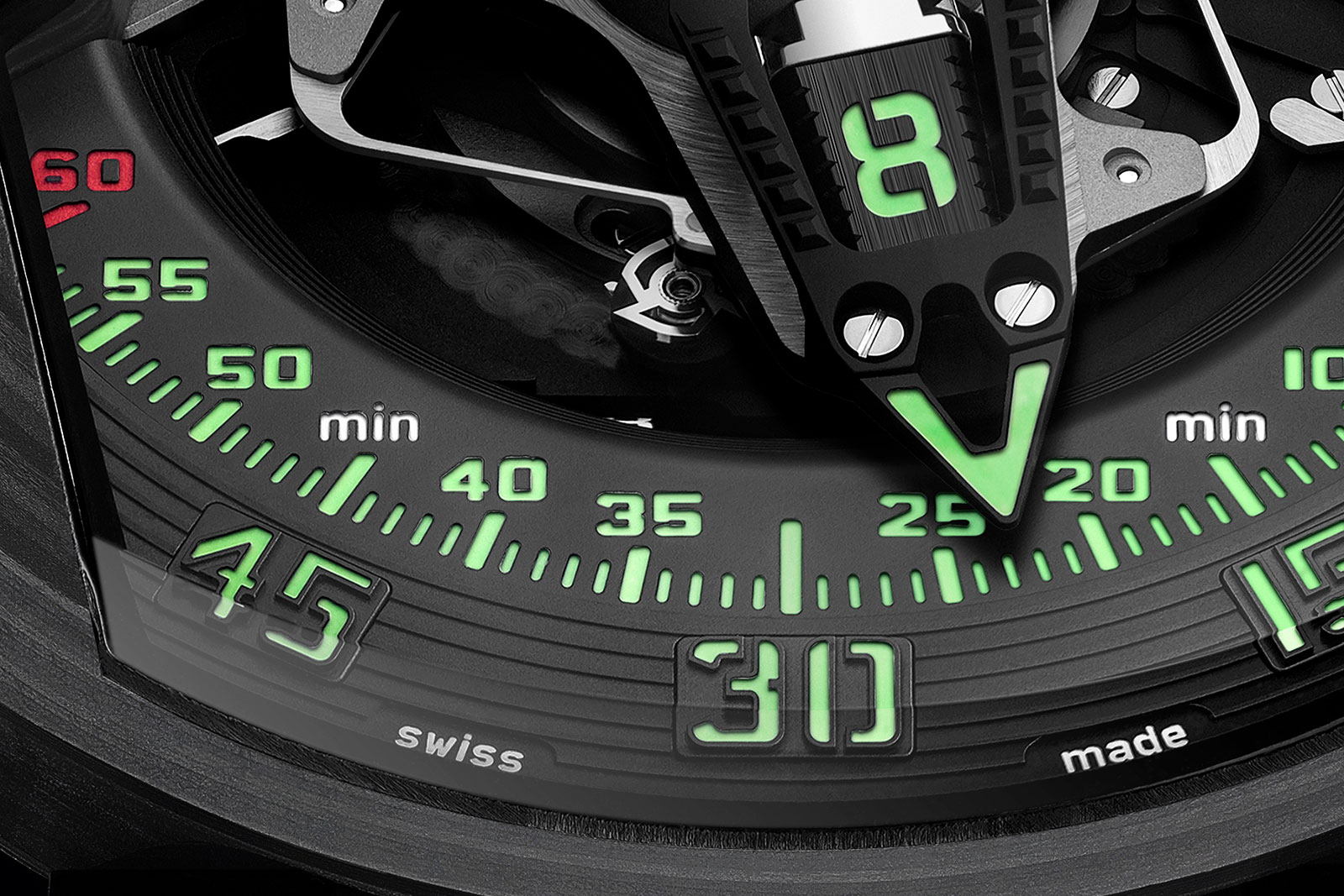 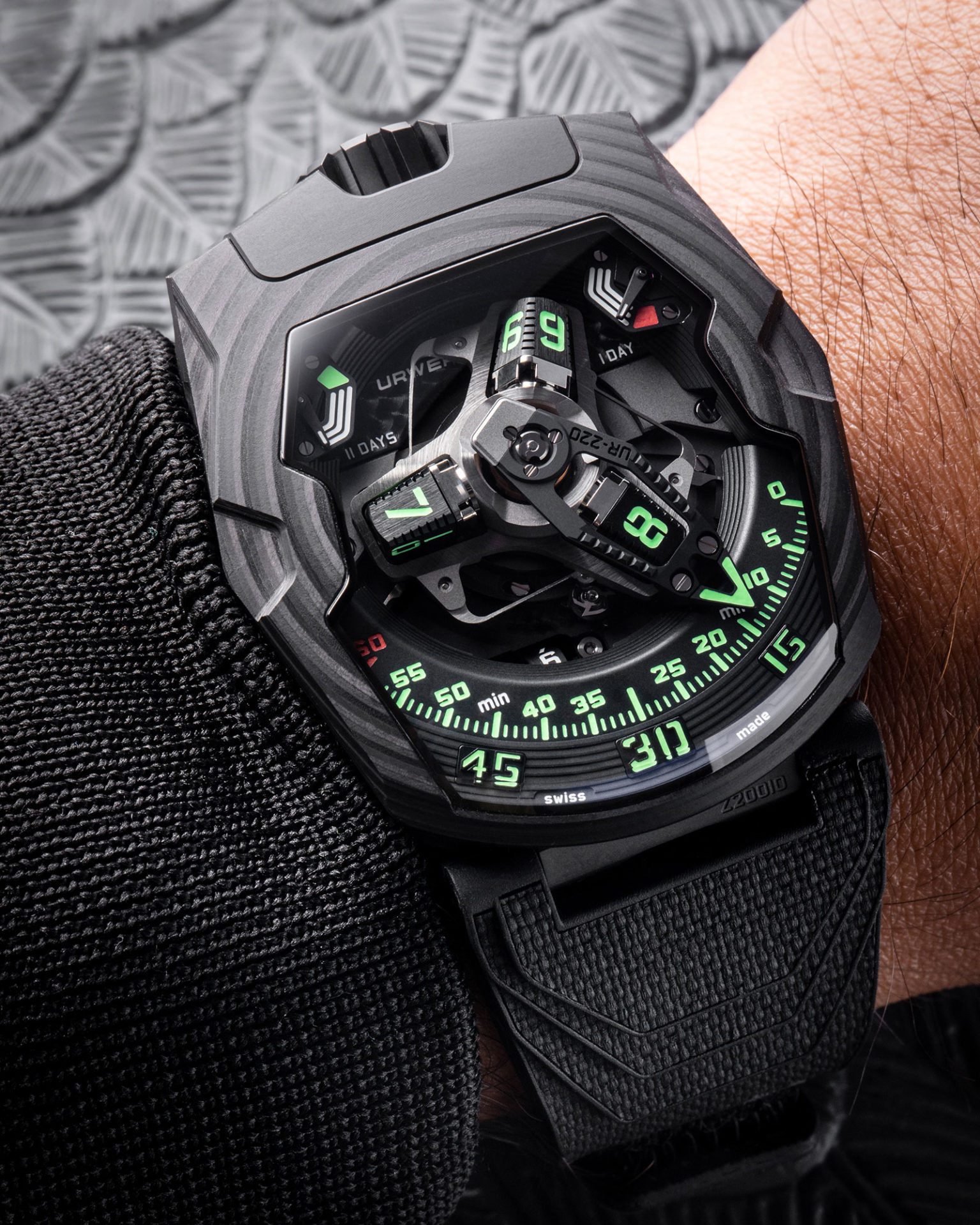 The UR-220 revives the “instrument panel” case back found on the brand’s earlier watches. Here it is essentially a single display – an oversized service indicator that counts the total running time of the watch on two rollers. At 39 months, or three-and-quarter years, the rollers halt, indicating a service is recommend (although probably not critical).

The service indicator only functions when the watch is running, and not when the movement is stopped. It has activated by the owner by first removing a long “security pin” on the back, and then sliding a button upwards, starting the count of the rollers. It is a non-reversible procedure that can only be reset by a watchmaker. 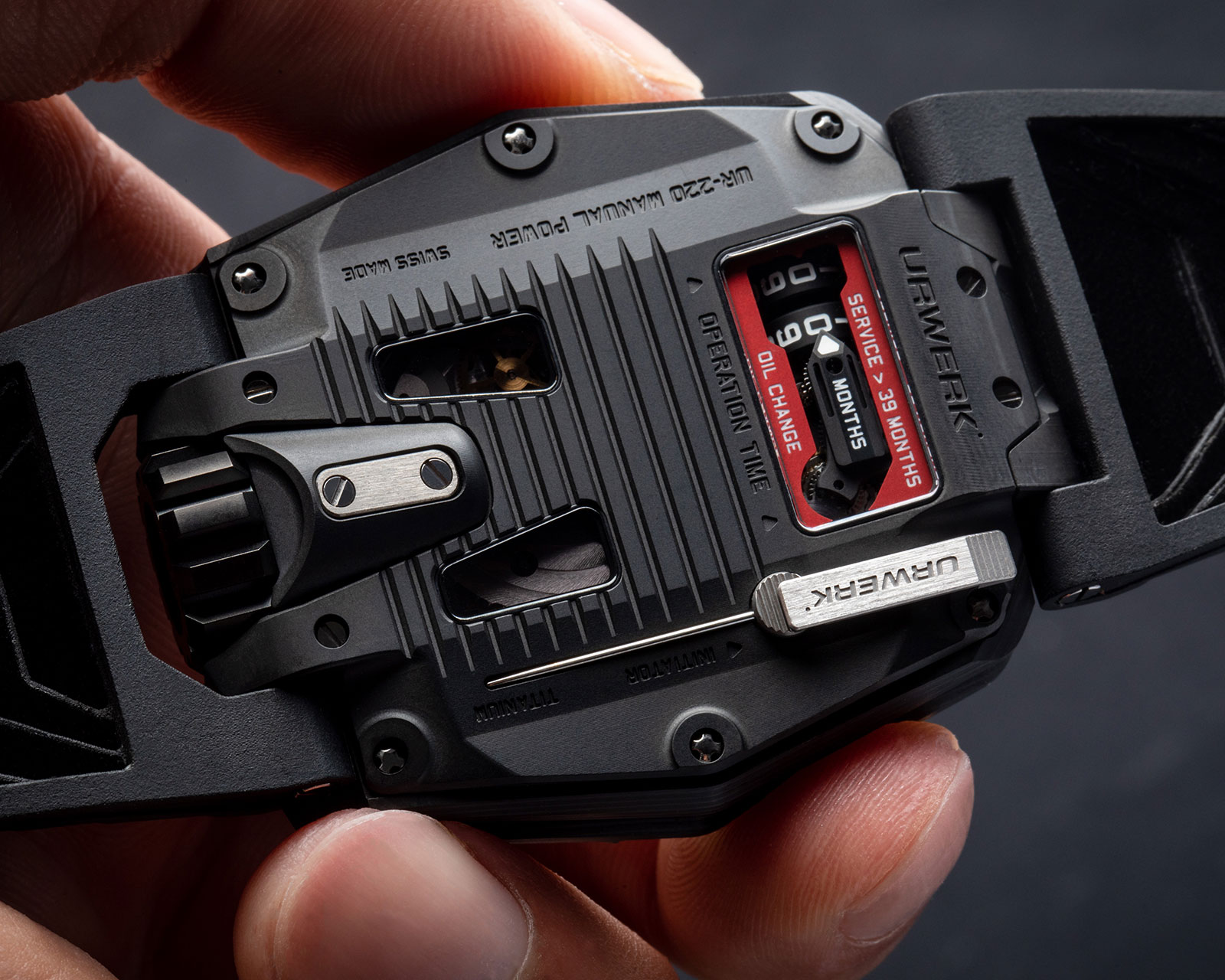 With the security pin in place Pulling out the security pin

The case is machine from a carbon composite comprised of 81 thin sheets of carbon arranged concentrically, giving it a radiating pattern on the front, and numerous parallel layers on the side.

And the strap is rubber with a carbon fabric inlay of sorts, and more importantly, a Velcro fastener, which will probably give it an excellent fit on the wrist. Correction September 15, 2020: The base movement is still the Zenith Elite, and not another calibre as stated in an earlier version of the article.

A lightweight, military-inspired and affordable quartz diver that keeps time to 15 seconds a year.