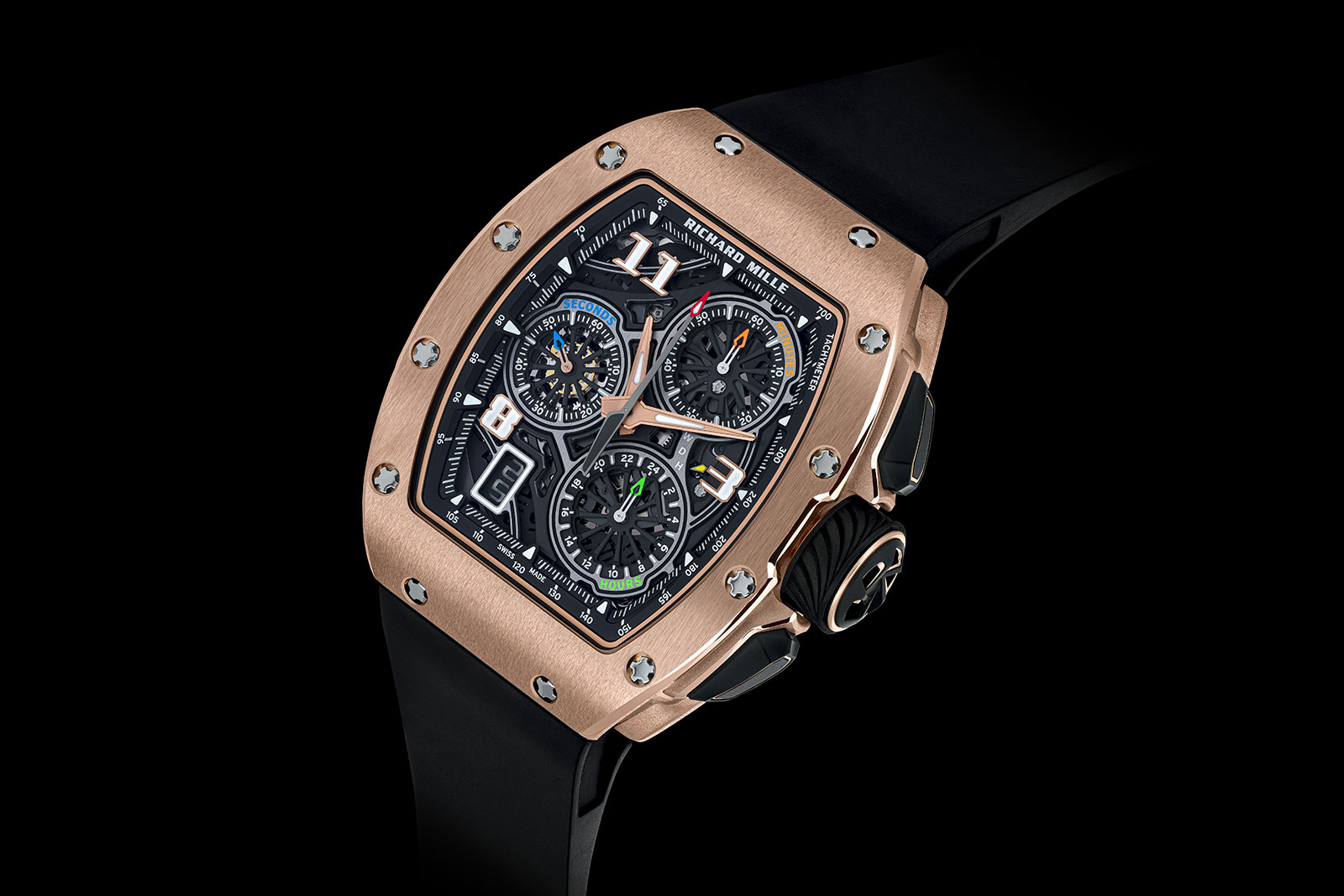 Having relied on external suppliers for its chronograph movements since the very beginning, Richard Mille has just unveiled its first in-house chronograph calibre in the RM 72-01 Lifestyle In-House Chronograph.

Ironically, the “Lifestyle” model name doesn’t do justice to the new CRMC1 movement within. Like most high-end chronographs, the CRMC1 has a column wheel as the one-off switch for the stopwatch, but in a novel twist, it has a pair of oscillating pinions to connect the chronograph wheels to the timekeeping gear train. 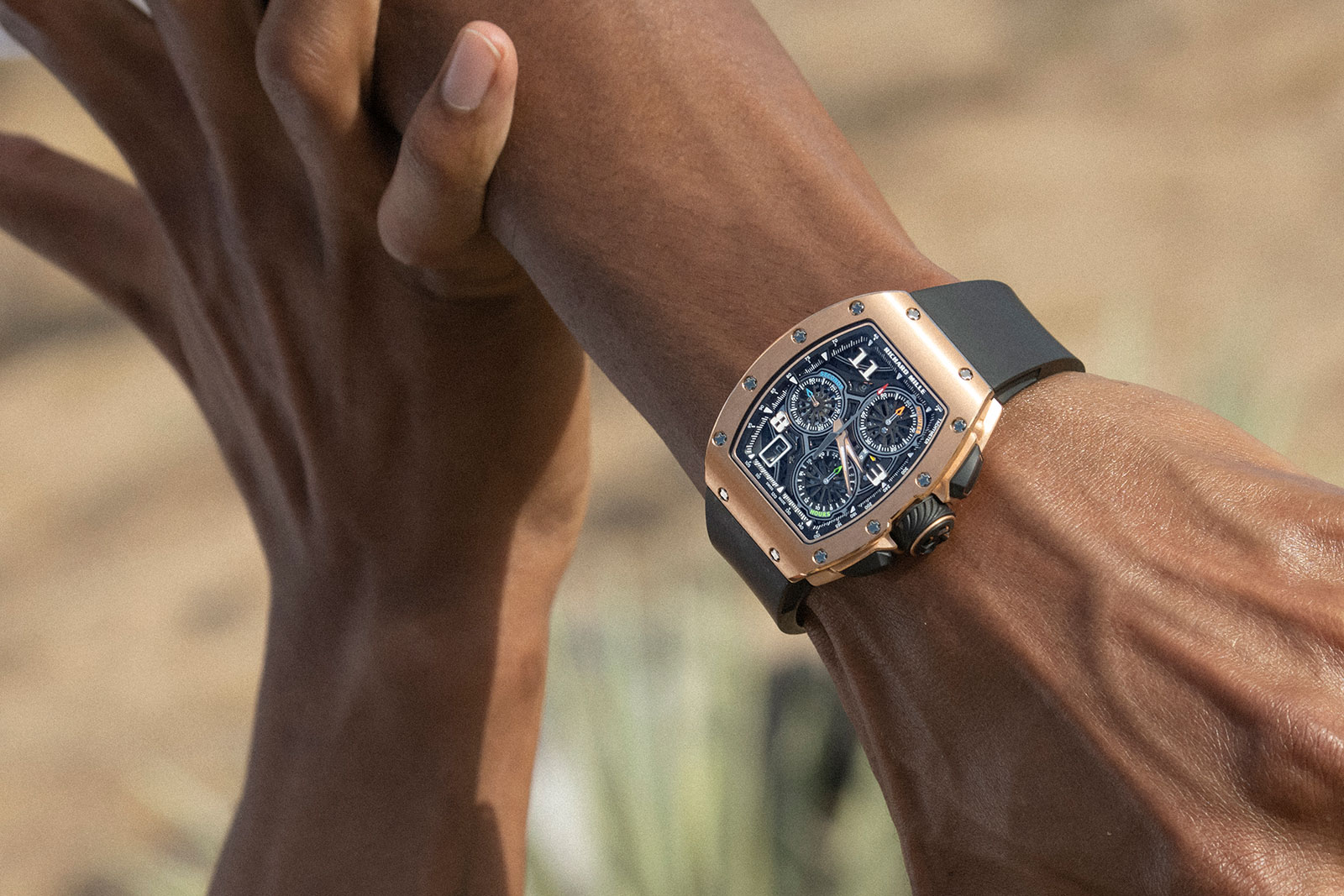 Richard Mille’s bestselling chronograph is the RM 11, which is powered by a modular calibre made up of a Vaucher base and a Dubois-Depraz module, making it uninteresting from a technical perspective. The new RM 72-01 is the opposite: it’s powered by a new movement that features a patented construction for the chronograph. Though the innovation in the movement is incremental – essentially reinterpreting existing ideas – it is still original. 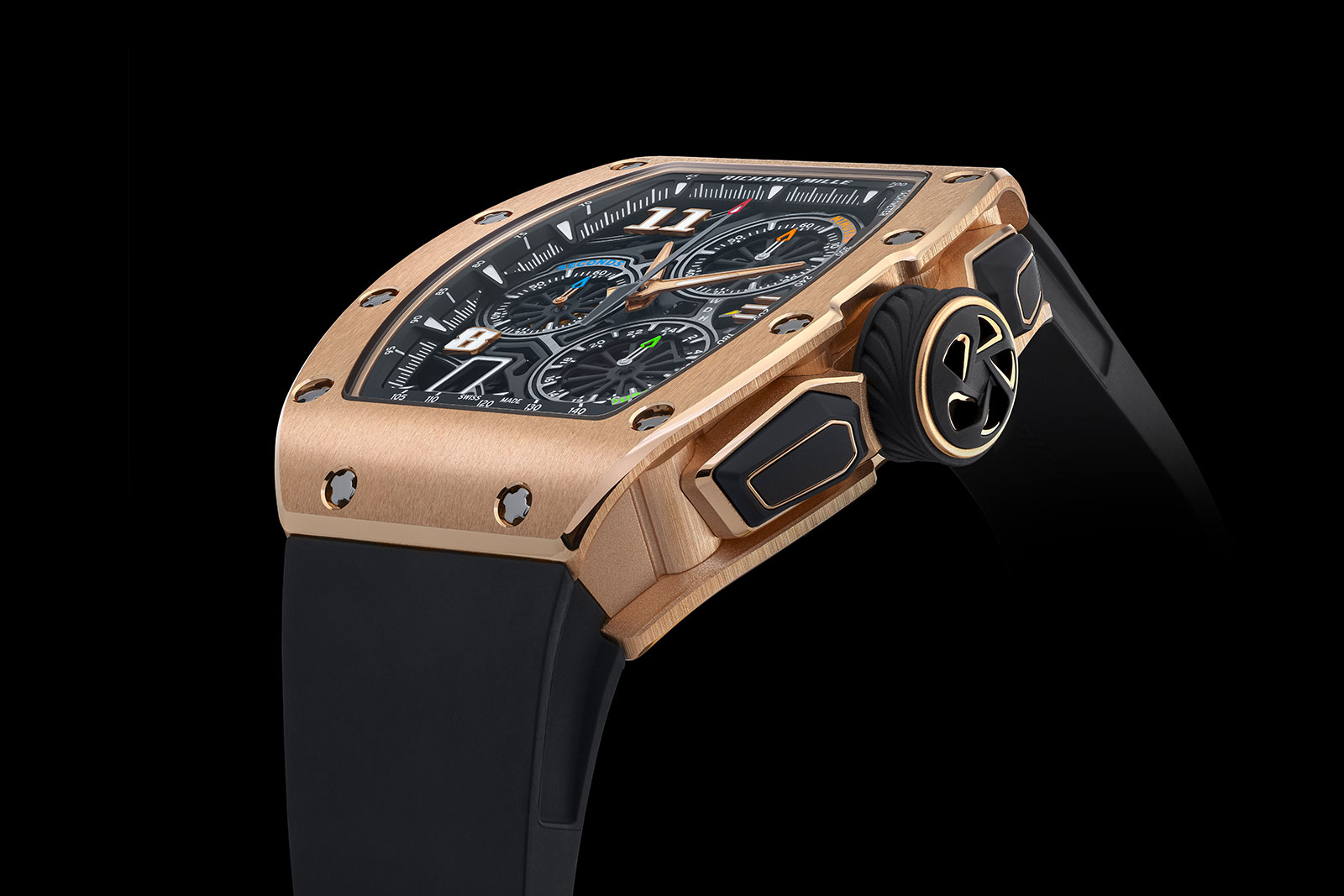 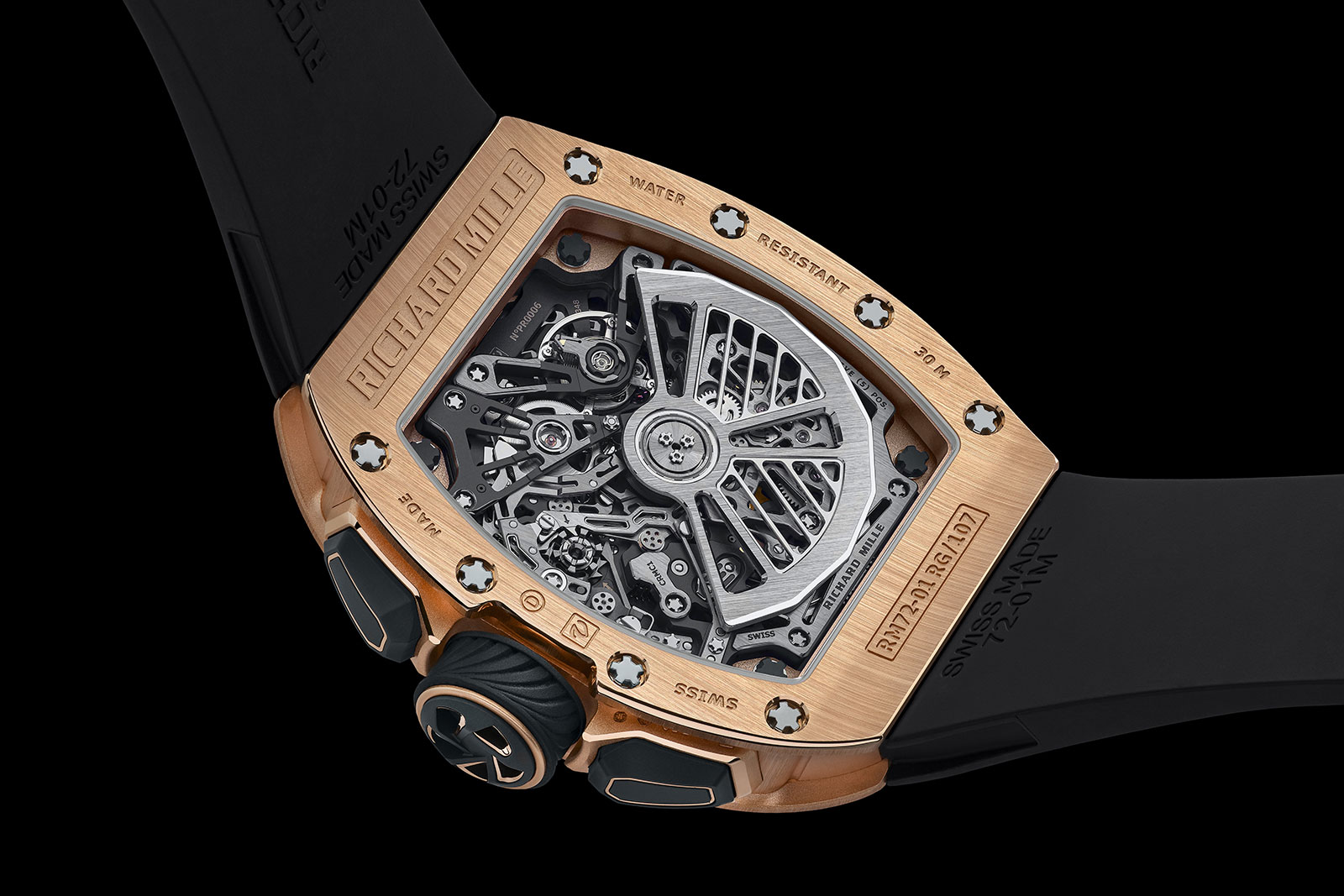 At the same time, the RM 72-01 is a notably compact watch for a sports chronograph, which should leave it sitting low on the wrist. In fact, the wearability of the RM 72-01 should trump the already excellent ergonomics of most Richard Mille watches.

And perhaps most surprising is the price. It costs about the same as the RM 11, but boasts a clearly superior, proprietary movement. Even though the RM 72-01 is an extremely expensive watch – the base model costs about US$185,000 – it is usually good value by the stratospheric standards of Richard Mille. 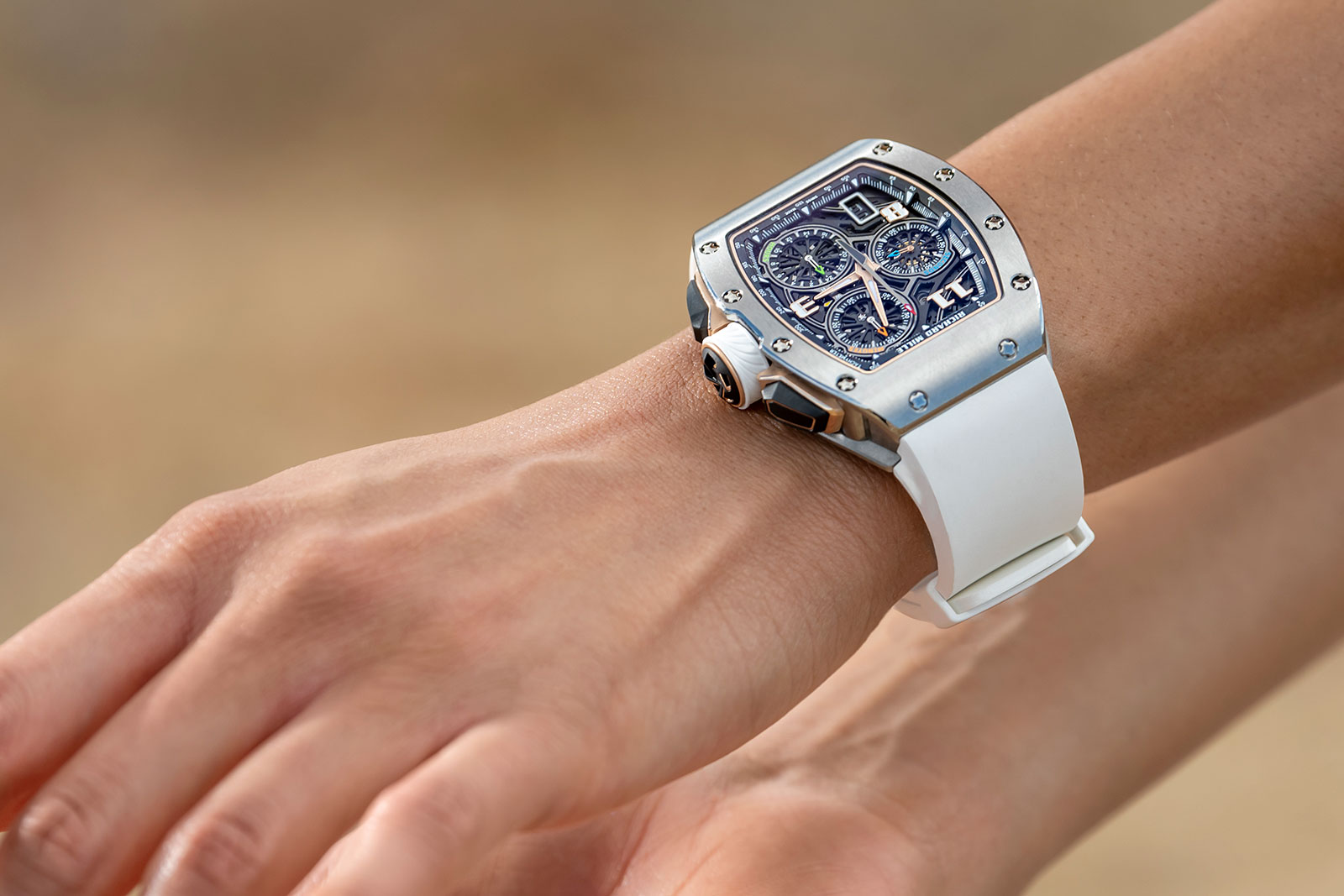 While the traditional chronograph construction uses a single wheel to transmit energy from the going train to the chronograph, the CRMC1 relies on twin oscillating pinions.

Richard Mille is the first brand to install two oscillating pinions in a movement. Offering the benefits of being compact and quick to mesh, the oscillating pinion is doubled up in the CRMC1 – one pinion each for the seconds and minutes wheel of the chronograph.

The two pinions are driven by a long, multi-part coupling lever that swings them into place; it appears likely that the set up and adjustment of the lever for perfect start and stop of the chronograph is a complex process. 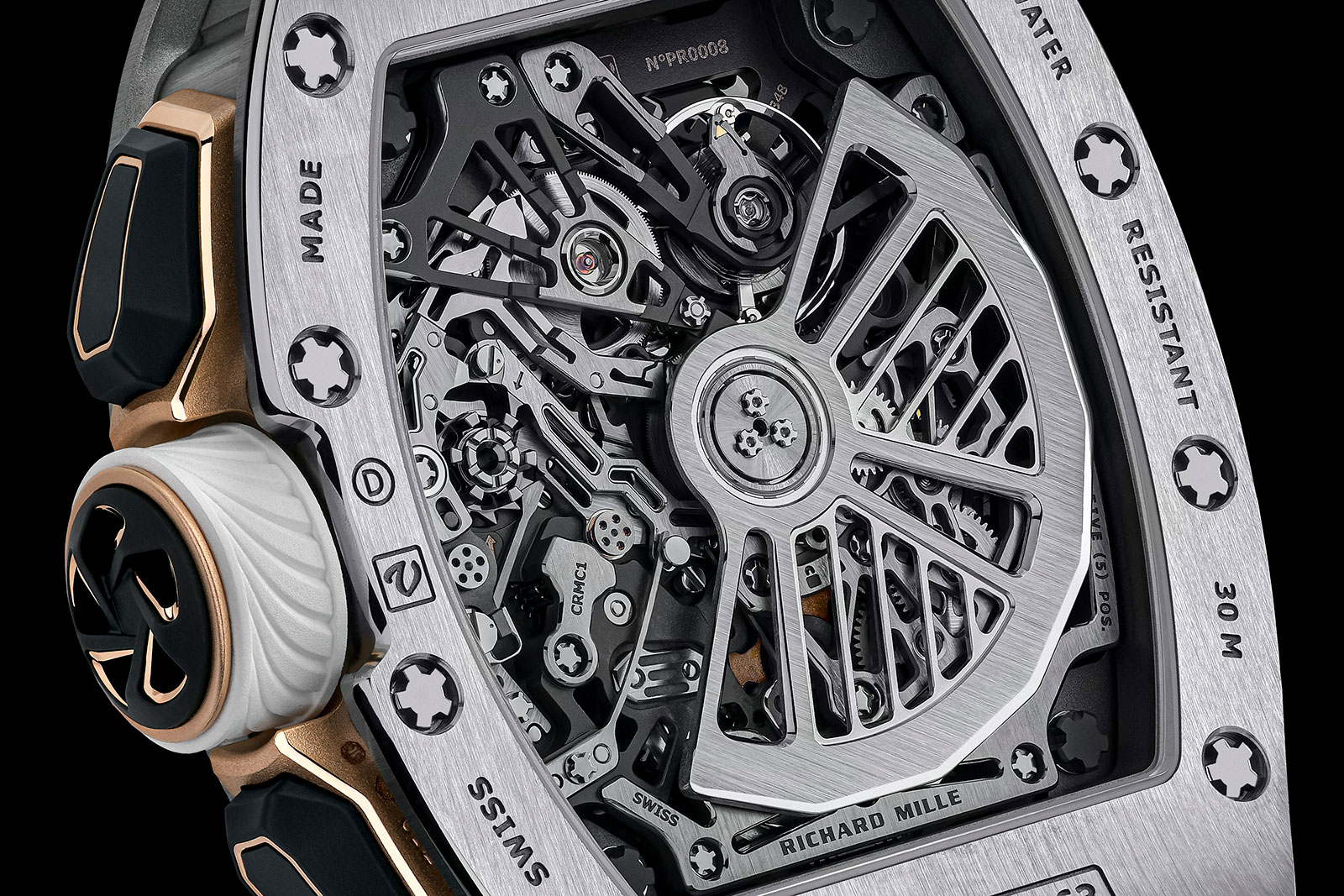 The use of two pinions in the CRMC1 serve to “split the torque” according to Richard Mille, which means each elapsed time register of the chronograph has its own power supply.

And the brand also states the double-pinion construction means that running the chronograph “does not affect the rate of the base movement in any way… Whether the chronograph is activated or not, the power reserve remains virtually unchanged.”

In short, the twin-oscillating pinion construction has all the advantages of the more common vertical clutch, but  requires less space, resulting in a thinner movement. The gain in thinness is substantial: the RM 72-01 is just under 12 mm high, compared to over 16 mm for the RM 11. 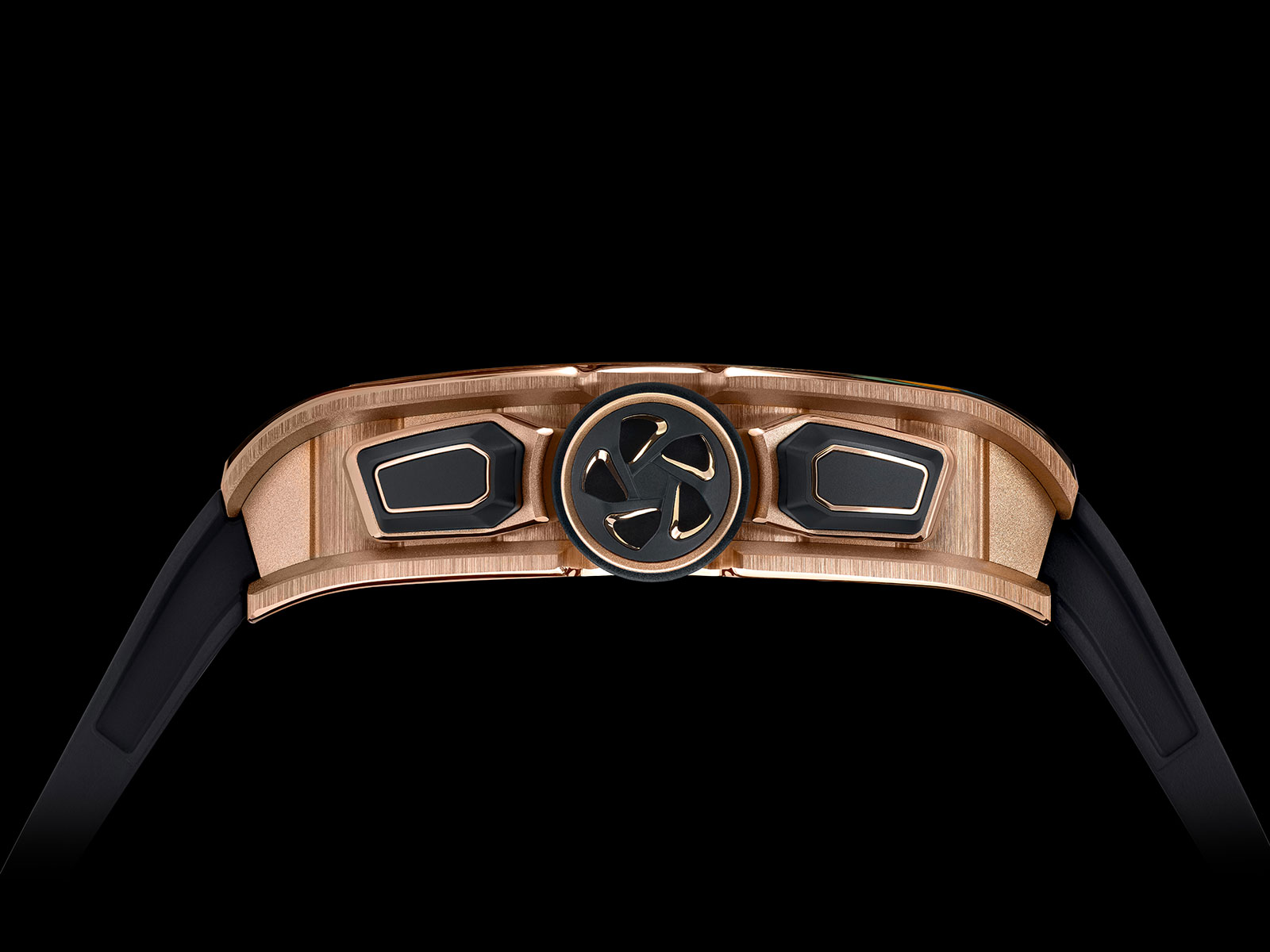 One consequence of the movement construction is a departure from the symmetrical dial layout found on most Richard Mille watches. The RM 072-02 has an unusual three-counter layout that has the registers at one, five, and nine o’clock, with oversized Arabic hour numerals in between. 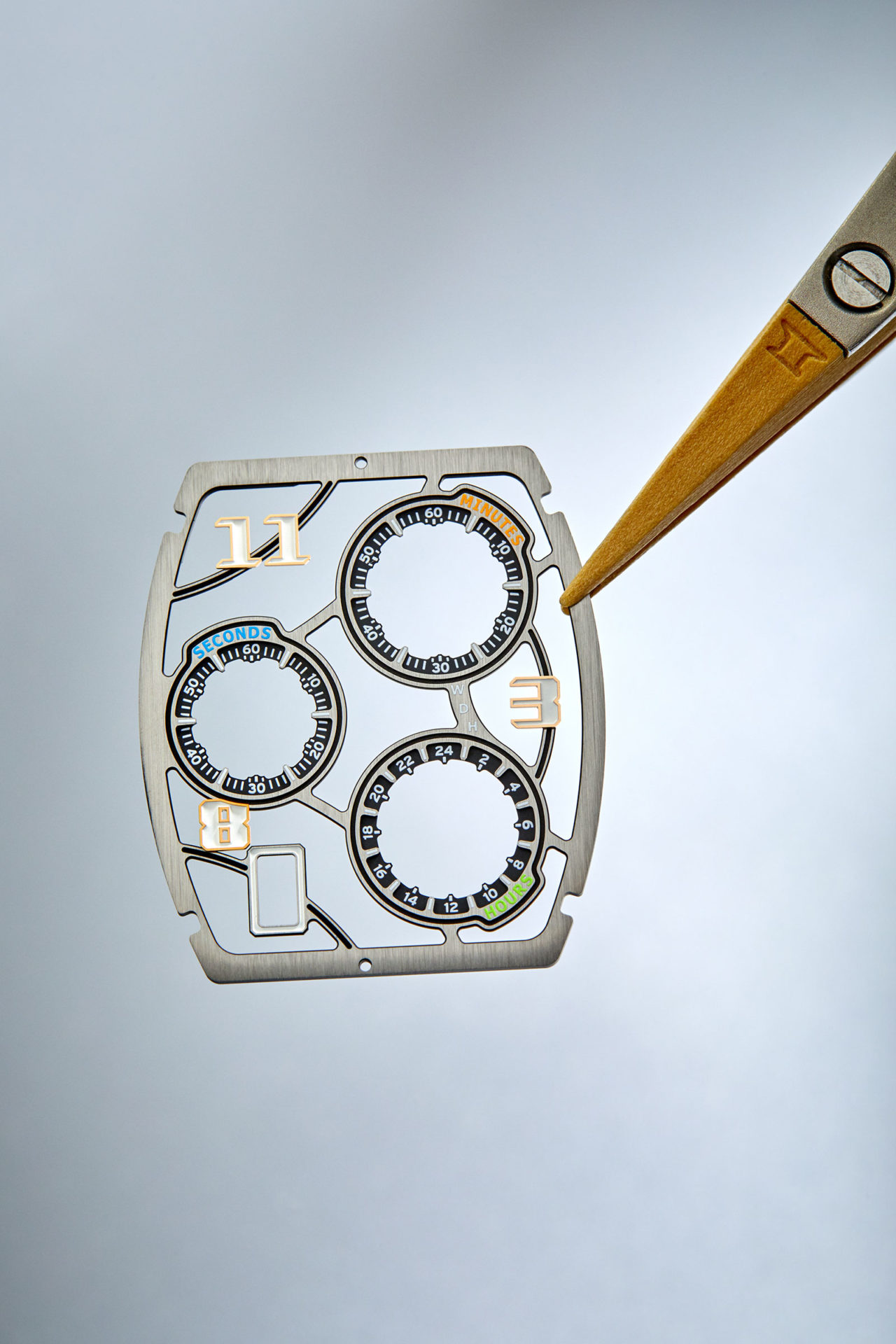 At seven o’clock sits the date display, and at three the crown-function indicator. Originally invented by Renaud & Papi, the movement specialist that’s owned by Audemars Piguet – but used in so many Richard Mille watches it’s become synonyms with the brand – the display indicates if the crown is in winding, setting, or neutral position. 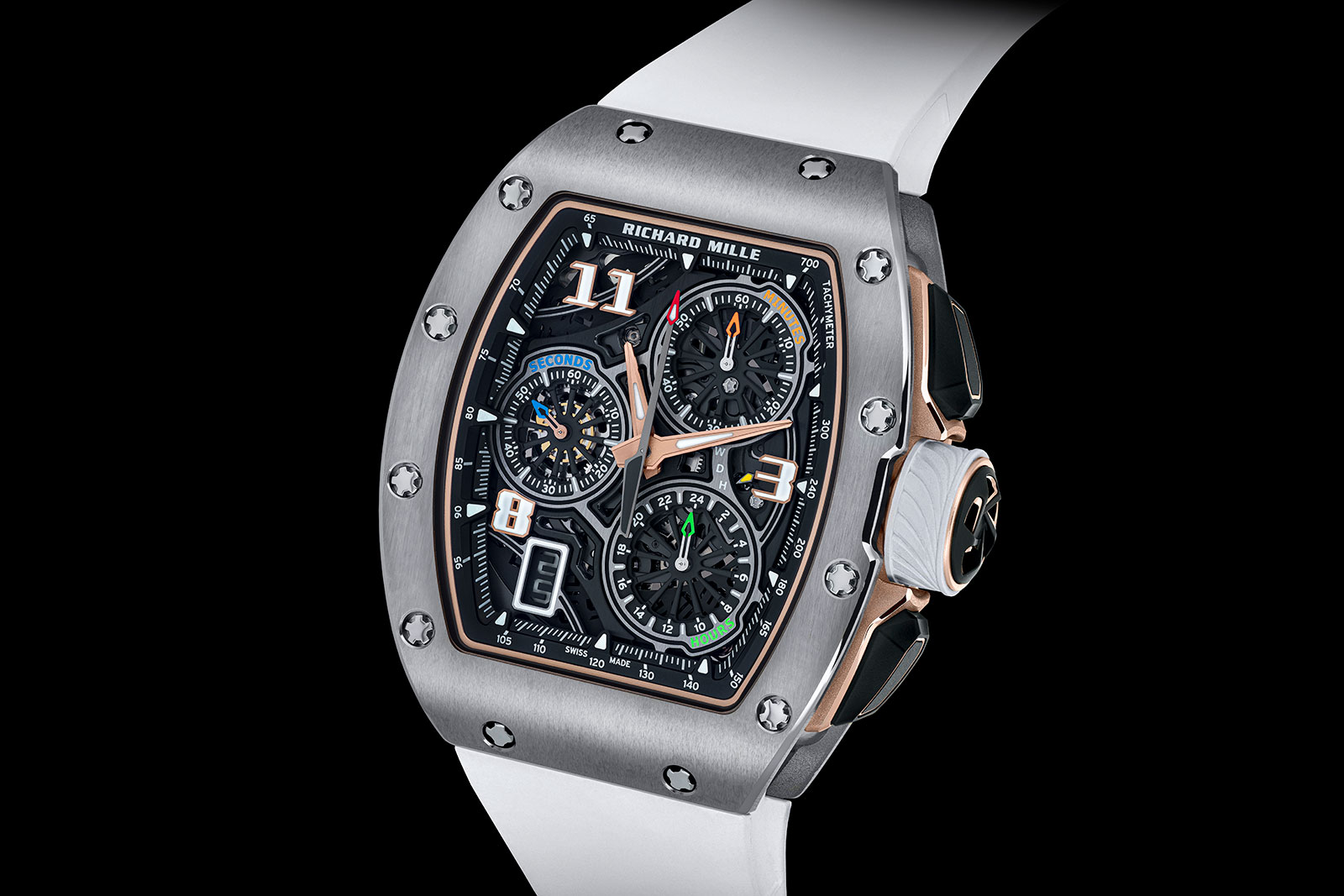 The case is a slim 11.68 mm high – a little thinner than a Rolex Daytona – and compact at 38.40 mm wide and 47.34 mm, making it one of the smallest watches in the Richard Mille catalogue.

While the case does retain the traditional Richard Mille form and details, the pushers and crown have been streamlined. The vents and text found on earlier chronograph models have been done away with in favour of a sleek interface. 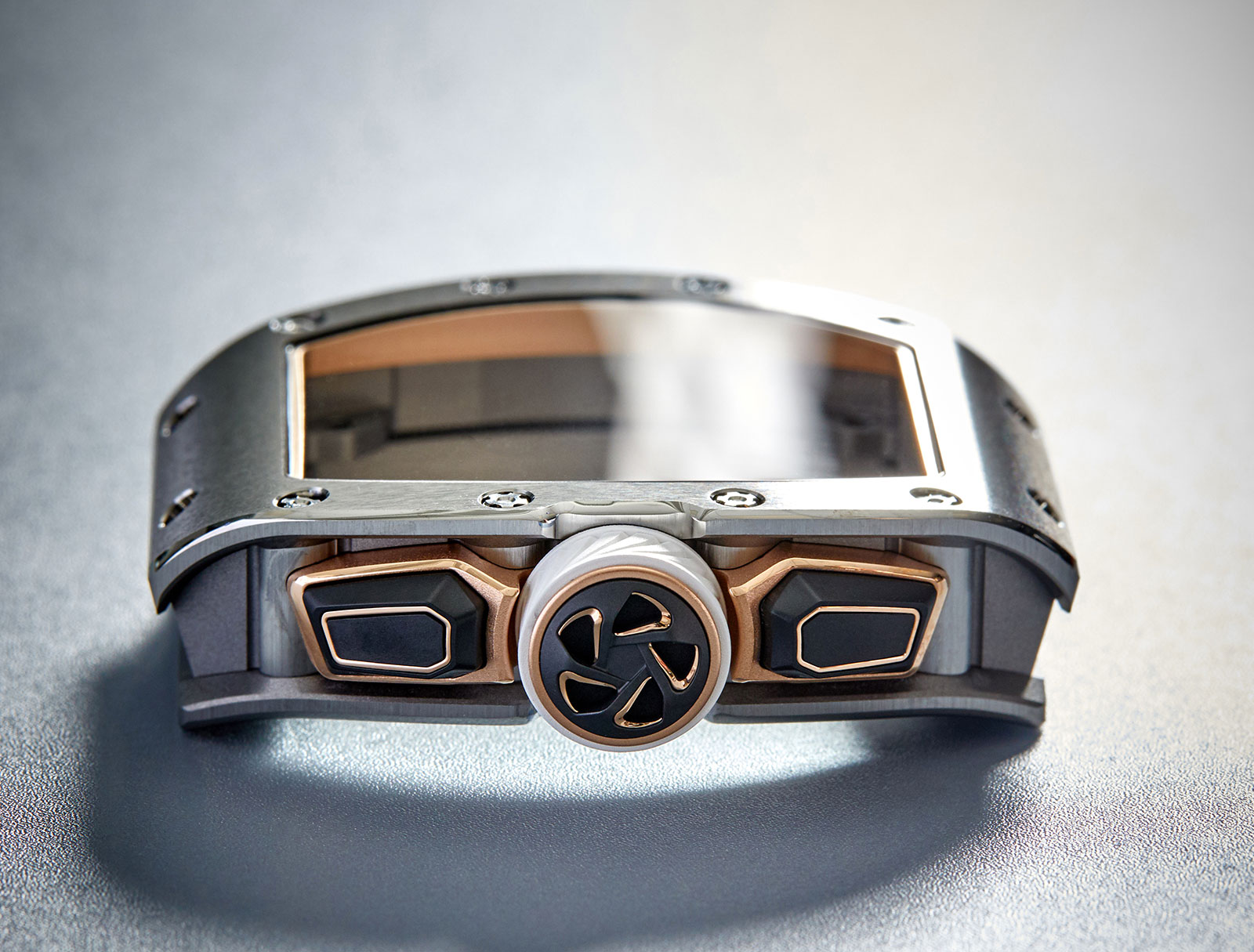 At launch four variants of the RM 72-01 will be available: all titanium, all red gold, as well as black or white ceramic combined with the case middle in red gold. All variants feature black ceramic pushers on a red gold base.

The Richard Mille smash hit enters its second generation with the RM 11-03 that's more of the same with an edgy twist.