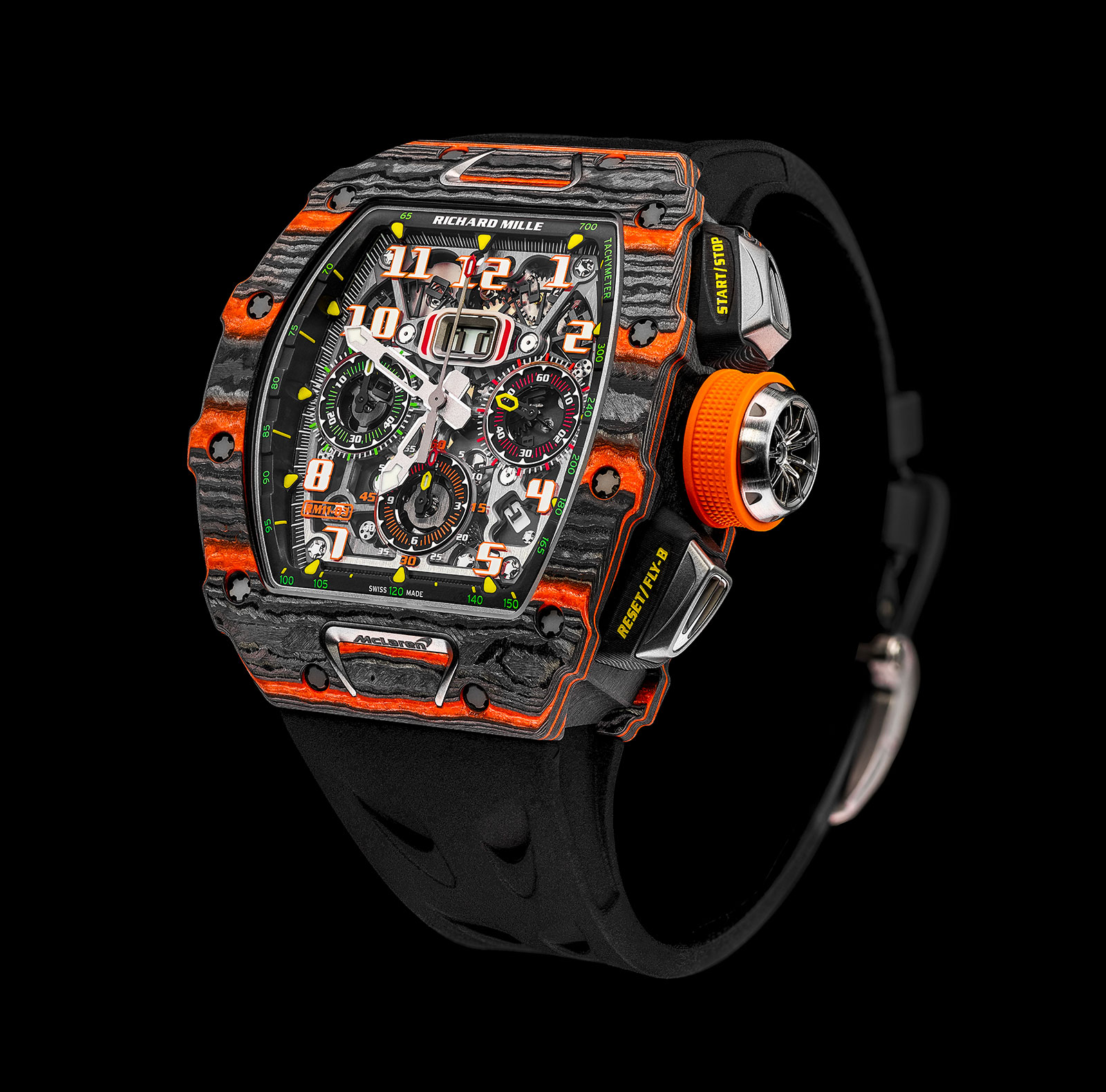 At the recent 88th Geneva International Motor Show, Richard Mille and McLaren Automotive turned their partnership into something tangible with the RM 11-03 McLaren Automatic Flyback Chronograph, a limited edition that will be available only to a rarefied group of petrols heads, at least for now.

The watch will only be sold to owners of McLaren’s Ultimate Series, the carmaker’s uber-performance cars that now number just three models, the F1 and P1 – both long sold out – and the Senna P15 that just launched alongside the wristwatch but also already sold out.

Richard Mille having become the official watchmaker for McLaren in early 2016, with the first collaboration between the two being the million-dollar RM 50-03 McLaren F1 unveiled last year, which was a tie-up with McLaren Formula 1. The new RM 11-03, however, was conceived by the watchmaker and McLaren’s car making arm. Notably, the watches come on the back of McLaren’s split with TAG Heuer after a 30-year run. And in ironic twist, TAG Heuer also recently announced a partnership with Aston Martin, after Richard Mille’s association with the maker of James Bond’s ride came to an end in 2016. The two-year wait has resulted in a tremendously striking wristwatch that just shouts Richard Mille. Jointly designed by McLaren Design Director Rob Melville and Richard Mille engineer Fabrice Namura, the RM 11-03 McLaren is based on the stock second generation RM 11 but tweaked to include immediate references to the carmaker.

Measuring 44.50mm wide, 49.94mm in length and 16.23mm thick, the watch is lightweight due to the materials used for the case, a combination of two carbon composites exclusive to Richard Mille in timepieces: Carbon TPT and Orange Quartz TPT. Short for “Thin Ply Technology”, the material are ultra-light carbon composites made from layers of carbon and silica fibres layered at different angles to each other, creating the distinctive striped pattern when the block of material is cut. The titanium chronograph pushers are reminiscent of the McLaren 720S headlight, while a pair of titanium inserts modelled on the McLaren F1’s air intake snorkel are inlaid on the bezel at six and 12 o’clock. And the titanium crown is shaped like a McLaren wheel rim and covered in orange rubber. The movement is nearly identical to the RMAC3 found in the standard RM 11, with the same key specs: double barrels for a 55-hour power reserve, an annual calendar with outsized date as well as a flyback function. The base calibre is built by movement maker Vaucher, while the chronograph module (that also has an annual calendar) is courtesy of Dubois-Depraz, a complications specialist. What sets this movement apart is the fact that the base plate and bridges are in black-coated titanium for greater rigidity.

Limited to 500 pieces, the Richard Mille RM 11-03 McLaren Automatic Flyback Chronograph is priced at SFr180,000. It is available only to McLaren Ultimate Series owners, and buyers of the Senna P15 will be able to choose a watch serial number that matches the number of their car (which is also limited to 500 pieces).

The Richard Mille smash hit enters its second generation with the RM 11-03 that's more of the same with an edgy twist.