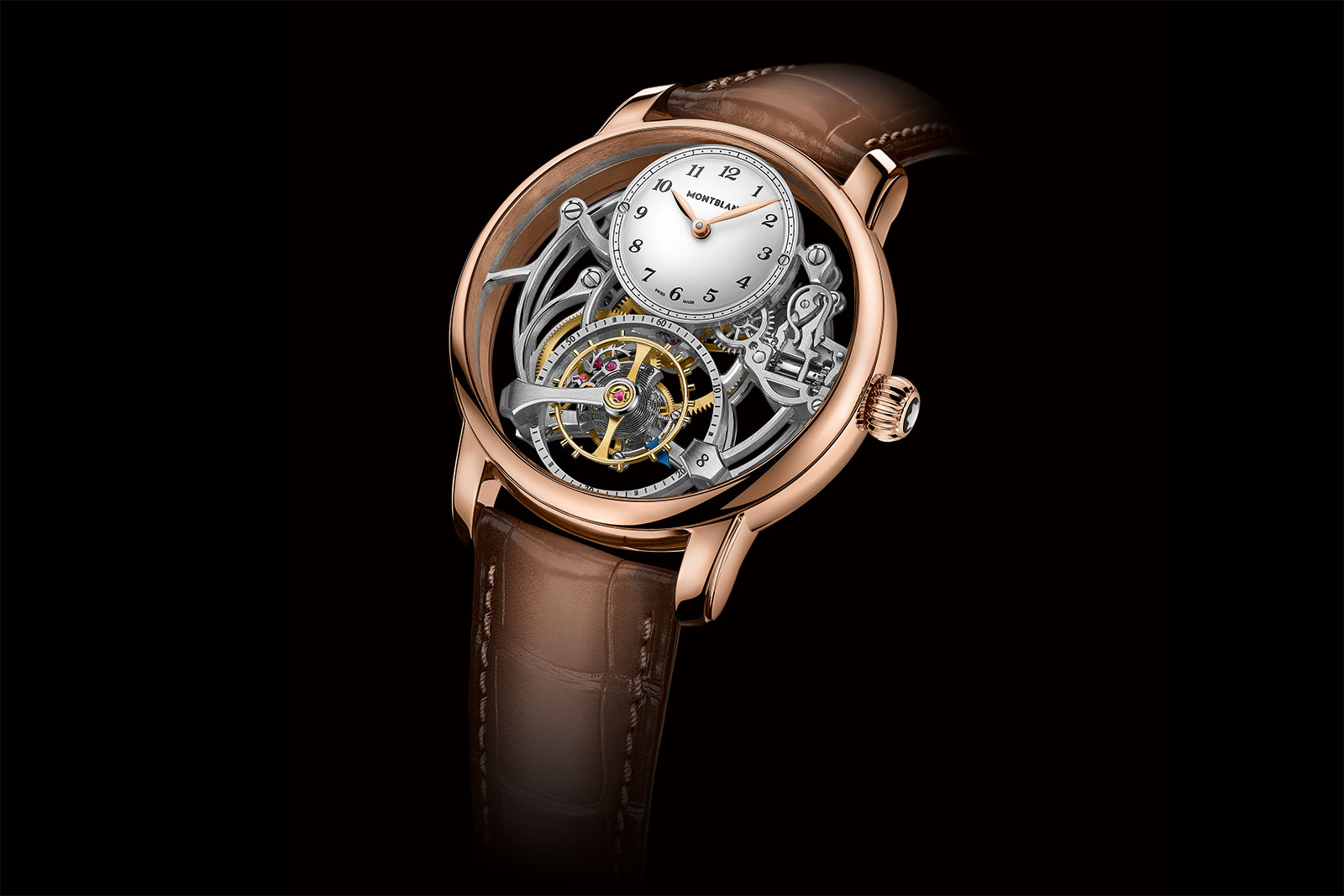 A fountain-pen maker for most of its history, Montblanc ventured into watchmaking and found success with its entry-level watches produced in its Le Locle factory. But the brand’s high horology watches are made at the former Minerva manufacture in Villeret – Montblanc acquired the brand in 2007 – which produces only a few hundred timepieces each year.

The latest model to emerge from Villeret is the Star Legacy Exo Tourbillon Skeleton, which boasts a skeleton movement that’s been hand-finished the traditional way. Though there is little movement left after the open working, there’s much left to decorate. According to Montblanc, the bridges include 420 inwards angles on their bevelled edges. 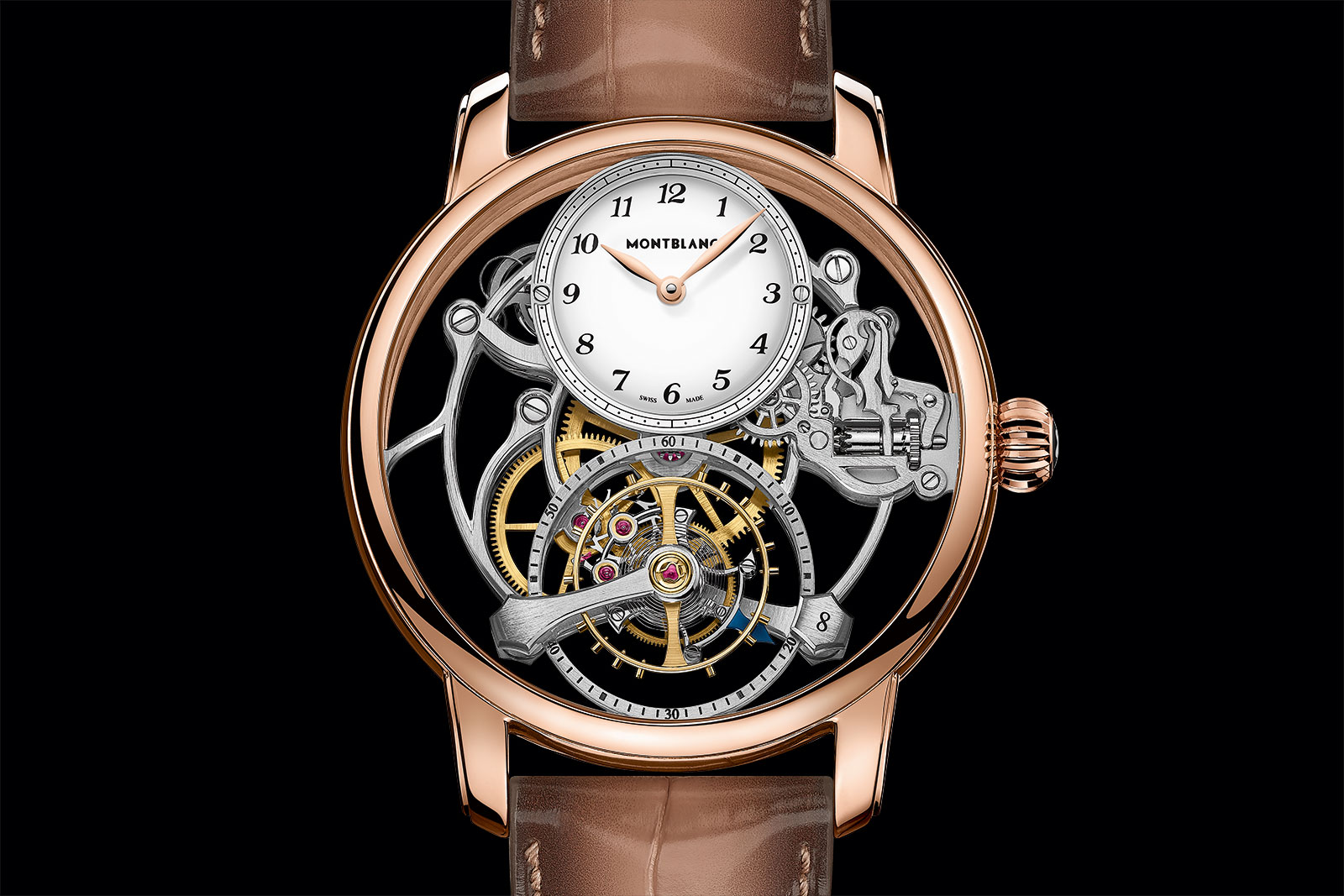 Measuring 44.8 mm by 15.01 mm, the Star Legacy Exo Tourbillion Skeleton is a surprisingly massive watch – a characteristic of many Montblanc watches powered by Minerva-derived movements. That’s because most of the calibres are descended from Minerva movements of the early 20th century that were originally built for pocket watches. The advantage is an appealing, old-school layout and aesthetic, but accompanied by the downside of extremely large size, making it impractical as an everyday watch.

Priced at about US$160,000, the Exo Tourbillon Skeleton is priced similarly to comparable watches. In fact, it arguably has a finer movement finish than the competition, going by the average standard of movement decoration at Villeret. But at the same time, it is extremely expensive for Montblanc, which largely concentrates on affordable watches.

So the primary weakness of the new Exo Tourbillon has nothing to do with the watch itself, instead it is has to do with the rest of Montblanc’s line up. The catalogue also includes the base-model Exo Tourbillon watches that have a similarly constructed tourbillon, albeit with less movement decoration. These cost much, much less – the entry-level Exo Tourbillon costs only a quarter of the new model. Even though the watches are different, they are similar enough that the price disparity is hard to stomach. 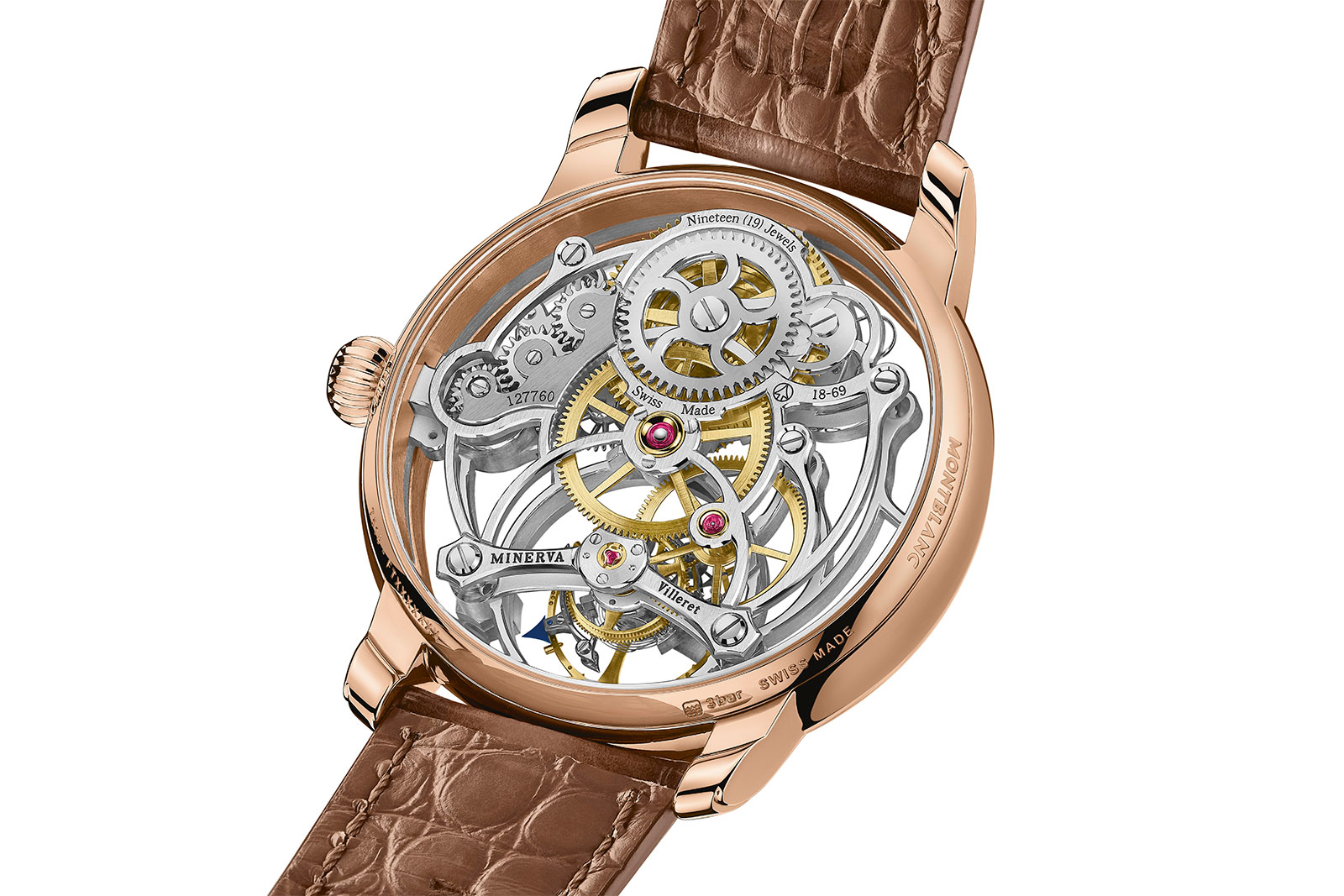 As the name suggests, the Exo Tourbillon is not an ordinary tourbillon. Put simply, it was devised to be a better tourbillon.

Installing the tourbillon regulator in wristwatch is arguably counter-intuitive from a technical perspective. Being on the wrist, the balance wheel is not in the vertical positioned for a prolonged period of time, hence the rotational correction to average out gravitational errors is not relevant.

With the Tourbillon Souverain Vertical, F.P. Journe solved the first problem by positioning the balance such that it is almost always vertical, but that is essentially giving pocket watch characteristics to a wristwatch movement, a roundabout solution to a problem that isn’t pressing.

The other shortcoming of the tourbillon are related to the cage: moving the tourbillon cage consumes energy, and the cage itself takes up space that could instead be used for a larger-diameter balance.

Montblanc, however, attends to the second problem by freeing the balance from the cage. By elevating the balance above and outside of the tourbillon cage, the balance wheel can now be bigger, which increases inertia and improves timekeeping stability. Also, now that the cage is smaller and freed from the weight of the balance, rotating it requires less energy. The result is a tourbillon that is more visually interesting than the average, a quality that is enhanced by the open-worked MB M18.69, allowing one to admire the tourbillon from many angles. 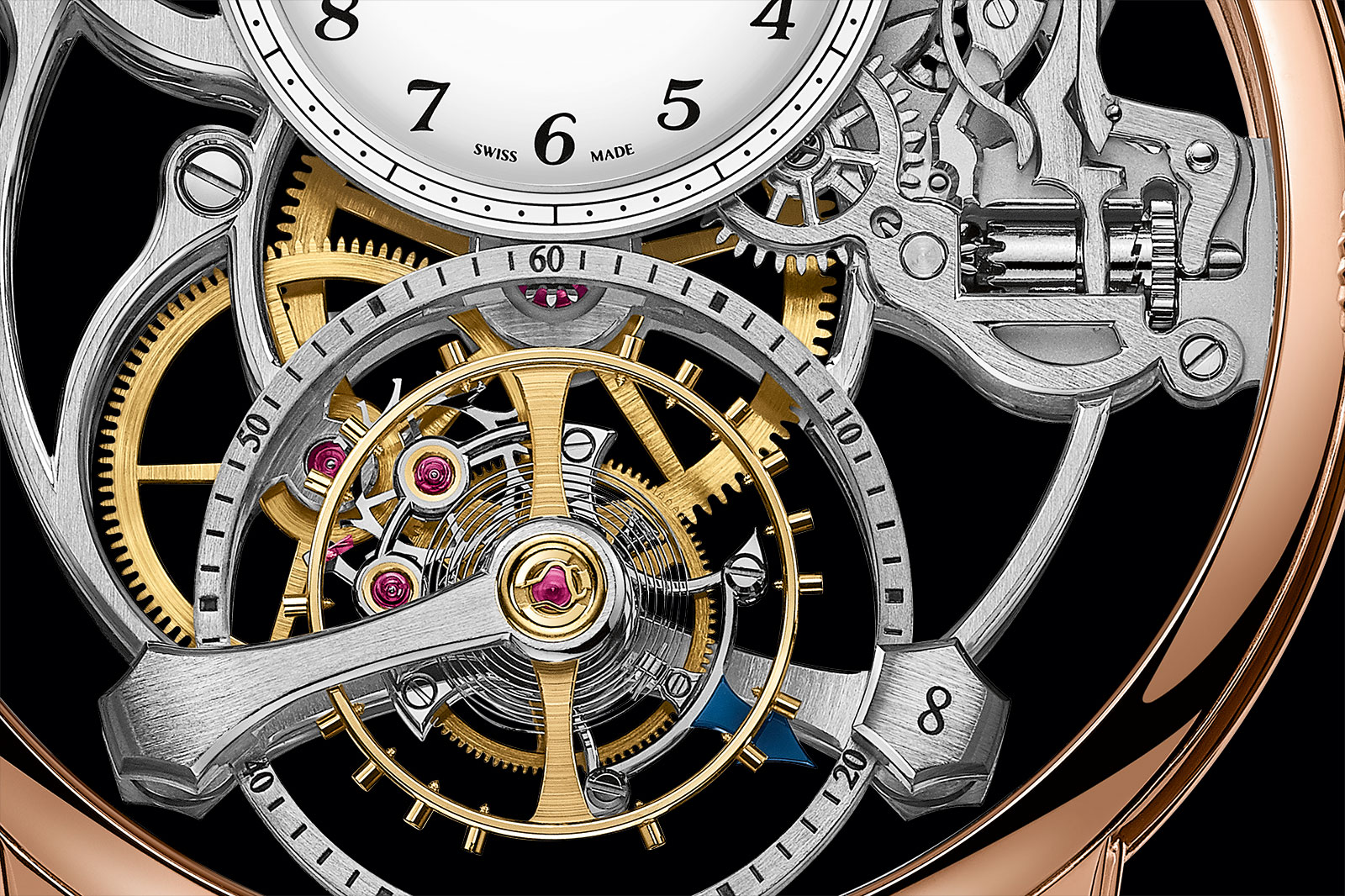 Aesthetics wise, the watch has balanced and symmetrical layout. The front, for instance, has the sub-dial and tourbillon forming a figure of eight, coincidentally the limited edition size – and no doubt to appeal to Chinese clients. The bridge architecture is thoughtful, formed by fluid shapes accented by the many sharp, inward angles on the bevels. 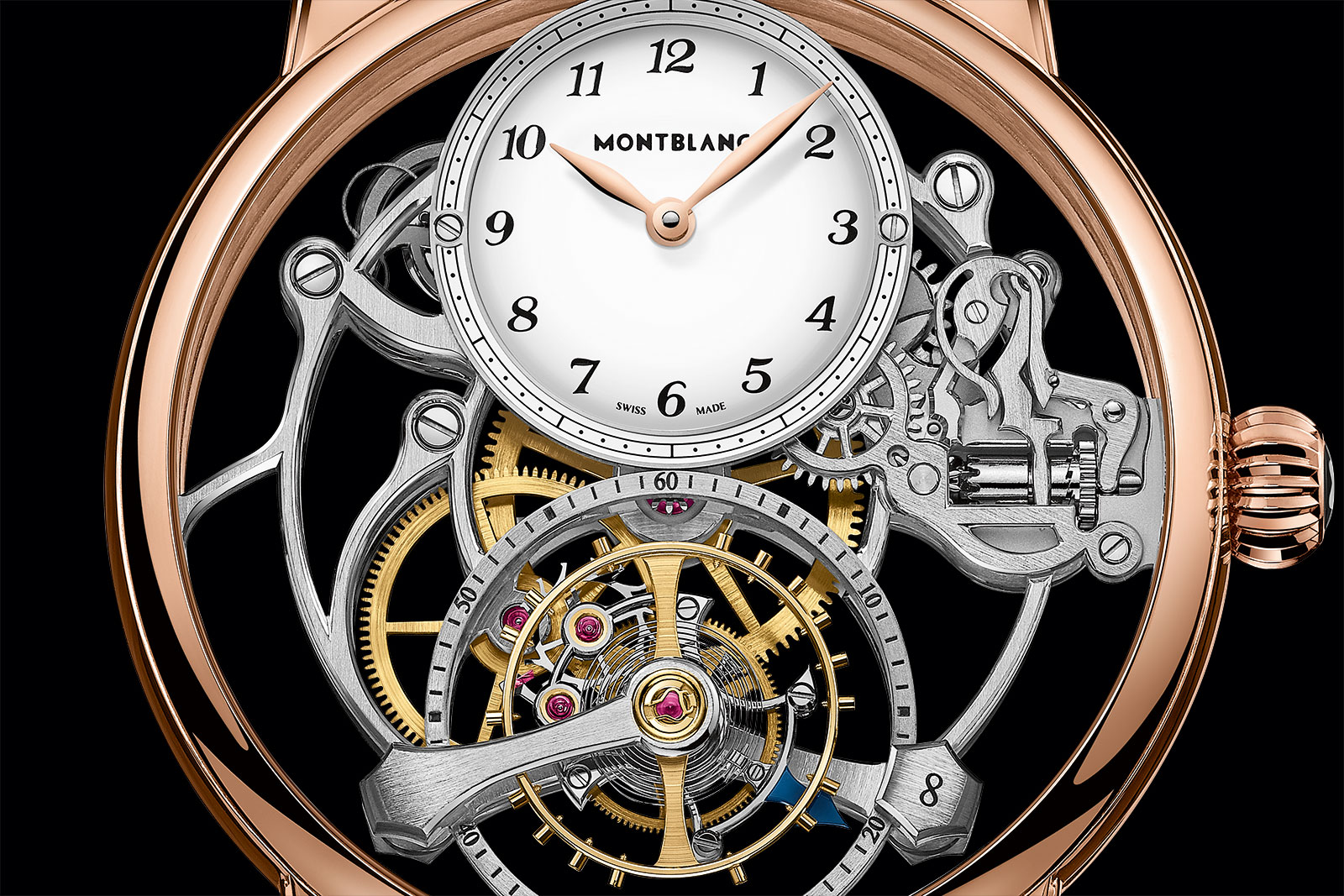 While the layout is similar to many open-worked tourbillions – there are only so many ways of constructing a tourbillon movement – Montblanc has cleverly suspended the whole movement within the case to create a truly airy aesthetics. The bridges connected to a large ring piece that is attached to the inside of the case. 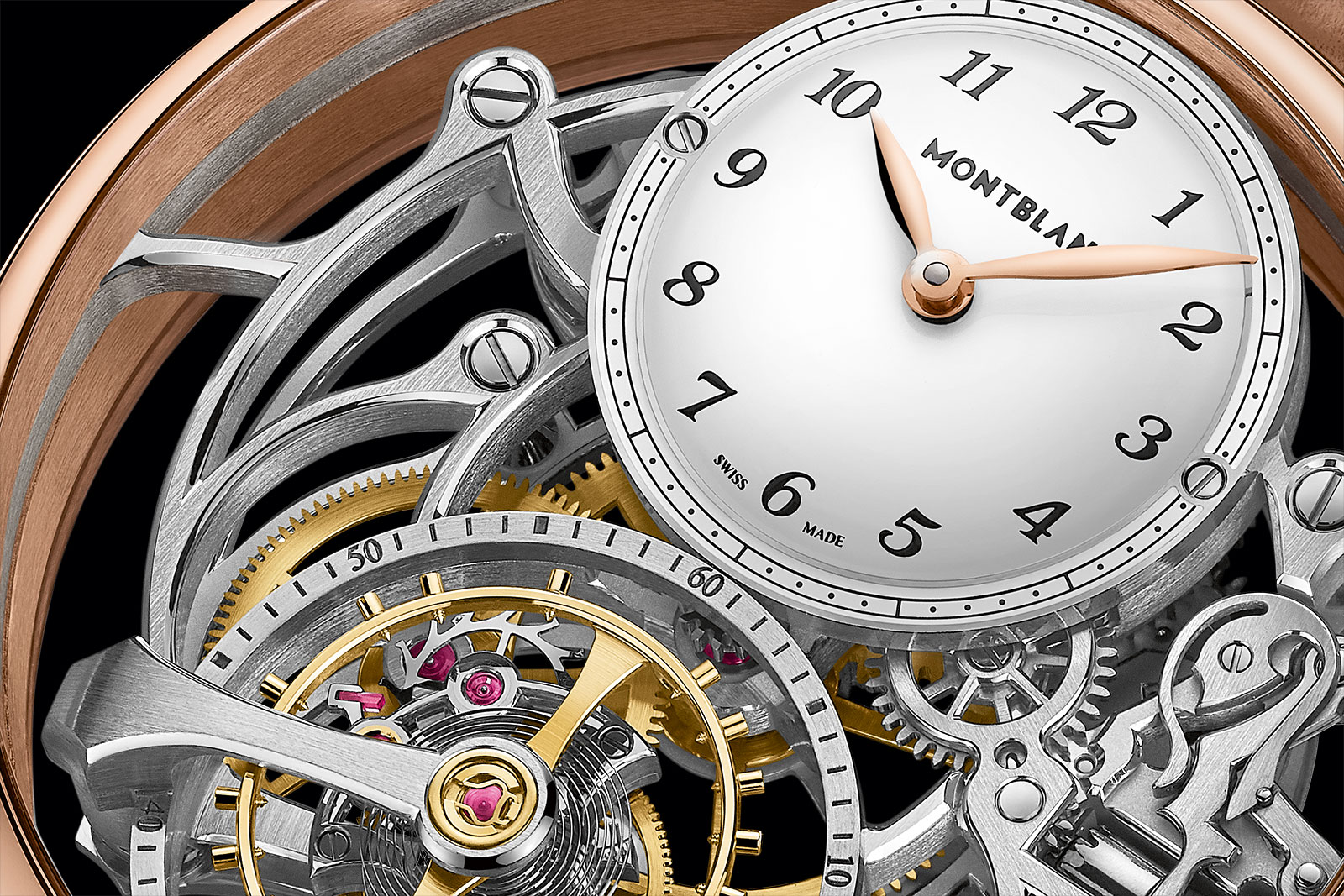 In order to maintain legibility, the sub-dial for the hours is white grand feu enamel, adding an artisanal touch to the watch

As is typical for movements made by the former Minerva factory, the finishing is done to a high level. The bridges are brushed on top with edges bevelled by hand – a significant effort considering the number of inner angles on the edges. Another distinctive feature is the “devil’s tail” winding click for the barrel ratchet wheel, which is modelled on the spear-shaped Minerva logo. 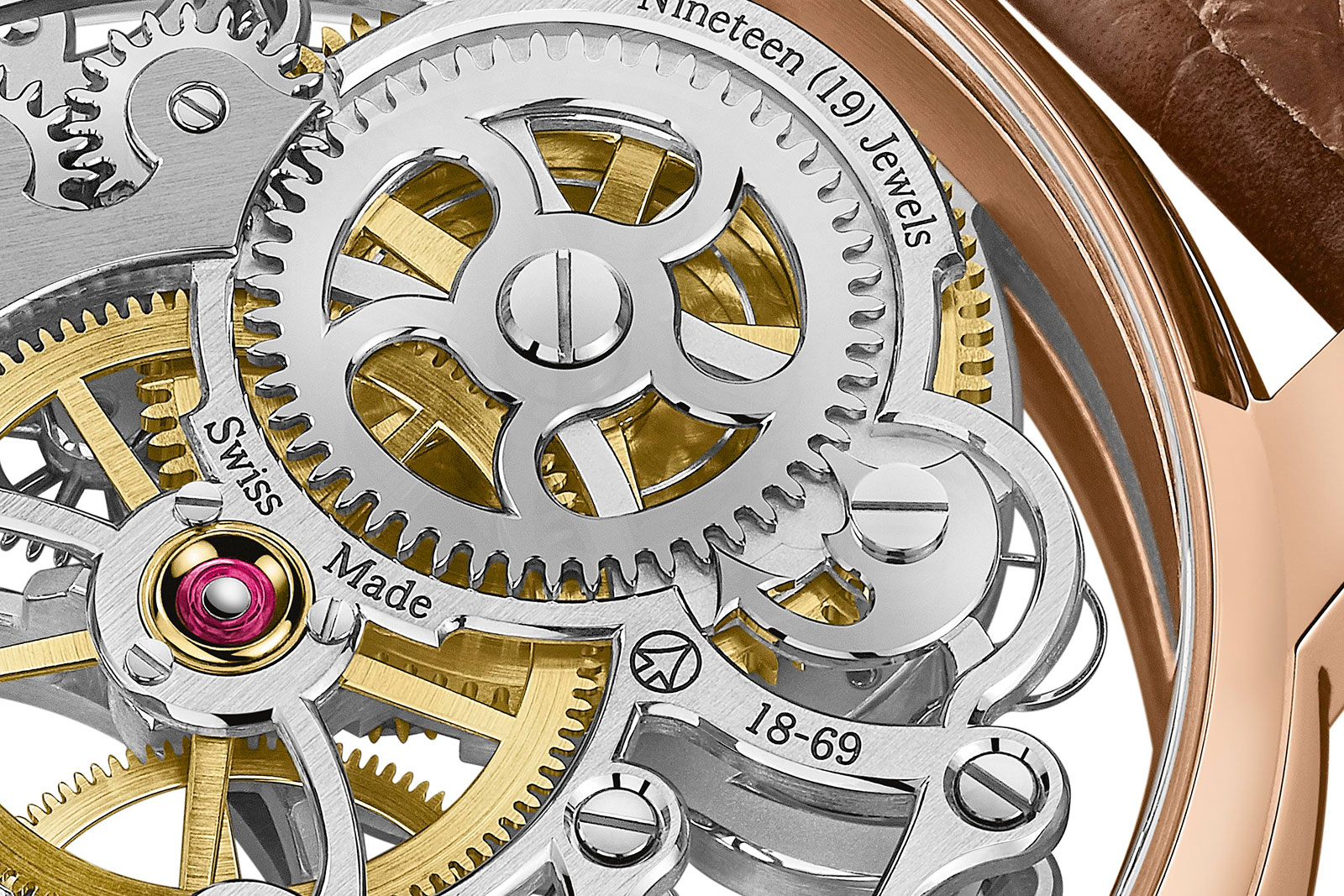 Limited edition: 8 pieces
Availability: On request, only at boutiques
Price: €138,000

In skeleton and full dial formats.