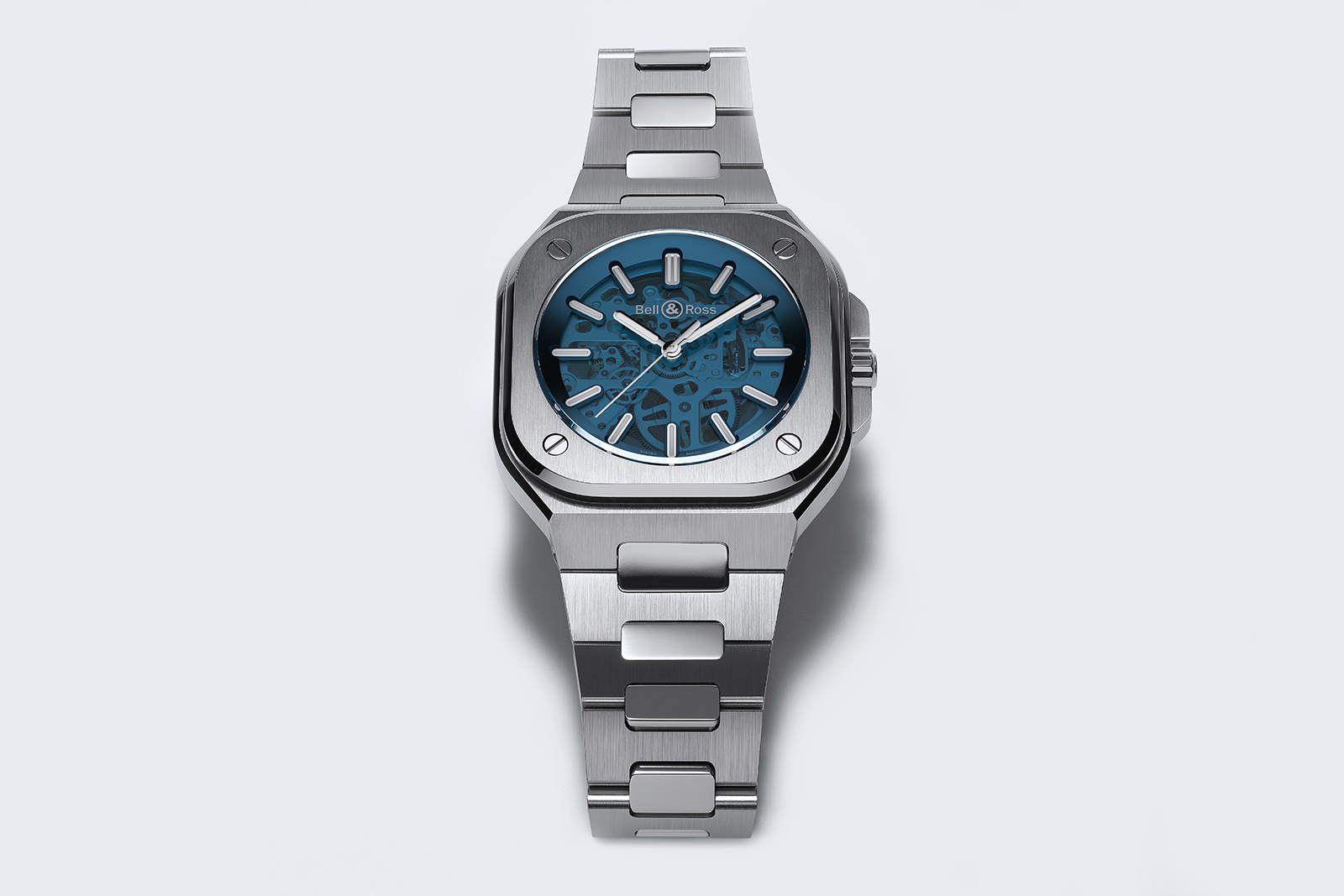 Unveiled just last year, the Bell & Ross BR 05 was yet another luxury-sports watch with an integrated bracelets, but priced more affordably than the average. The flagship model of the line up was the BR 05 Skeleton, an urban and contemporary open-worked watch that’s just been given a new look.

The BR 05 Skeleton Blue is essentially the same as last year’s model, but facelifted with a blue-tinted sapphire dial that gives it a punchier look. 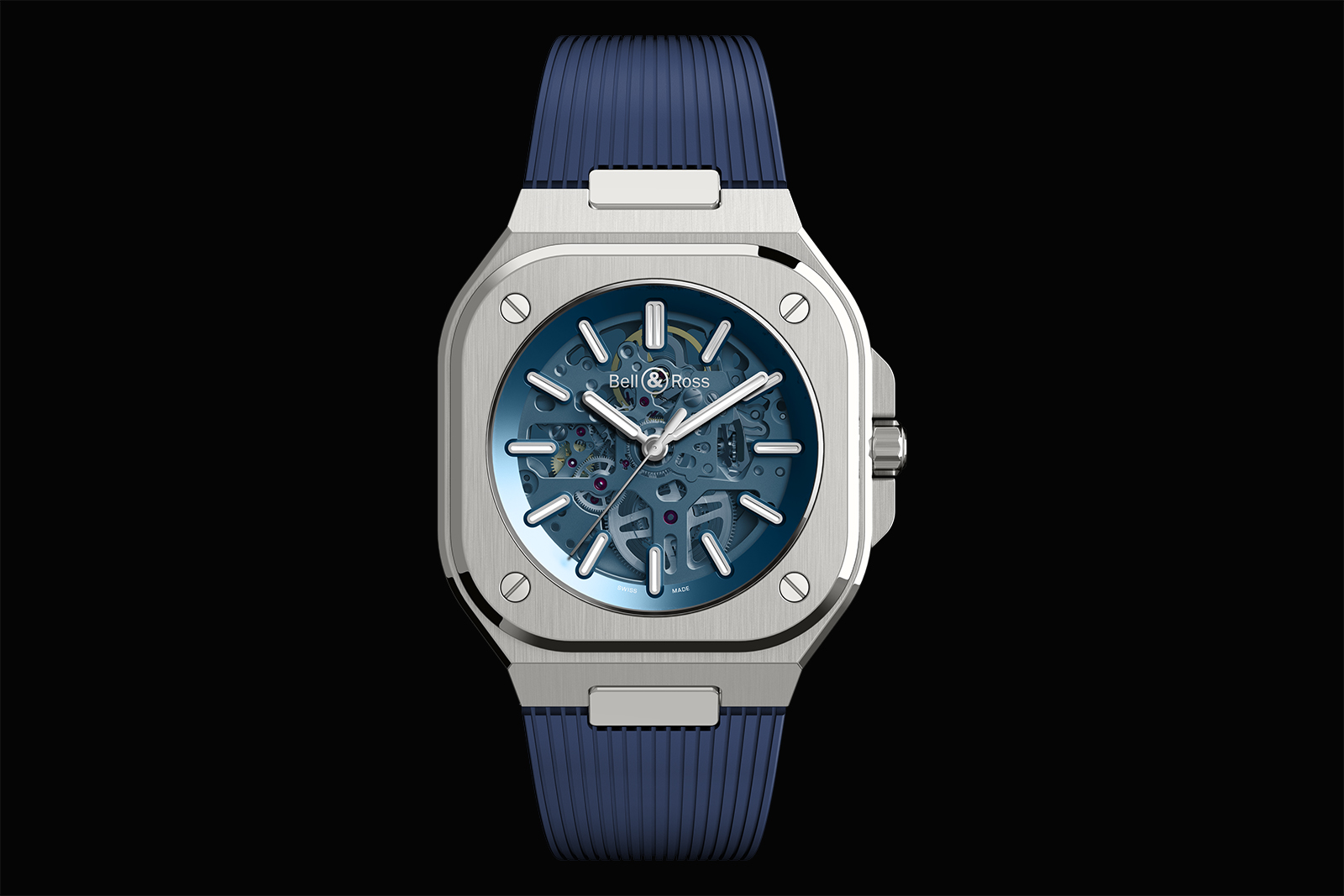 The BR 05 is one of my favourites from Bell & Ross. The design blends the key elements of the brand’s flagship military-aviation watches like the BR 01 and BR 03, and incorporates them into a case that is modern and sharp, giving it arguably greater mainstream appeal than the military-inspired pilot’s watches. While the BR 01 and BR 03 are undoubtedly icons, their tool-like appearance and large case – 46 mm and 42 mm respectively – definitely dissuade some.

On the other hand, the BR 05 is much more manageable on the wrist at 40 mm wide and 10.4 mm in height. Though it’s smaller than the BR 01 and BR 03, the case is architectural in form, and features myriad textures – polished and satin-brushed surfaces, often separated by polished bevels. The result is a smallish but appealing case that manages to look three-dimensional. 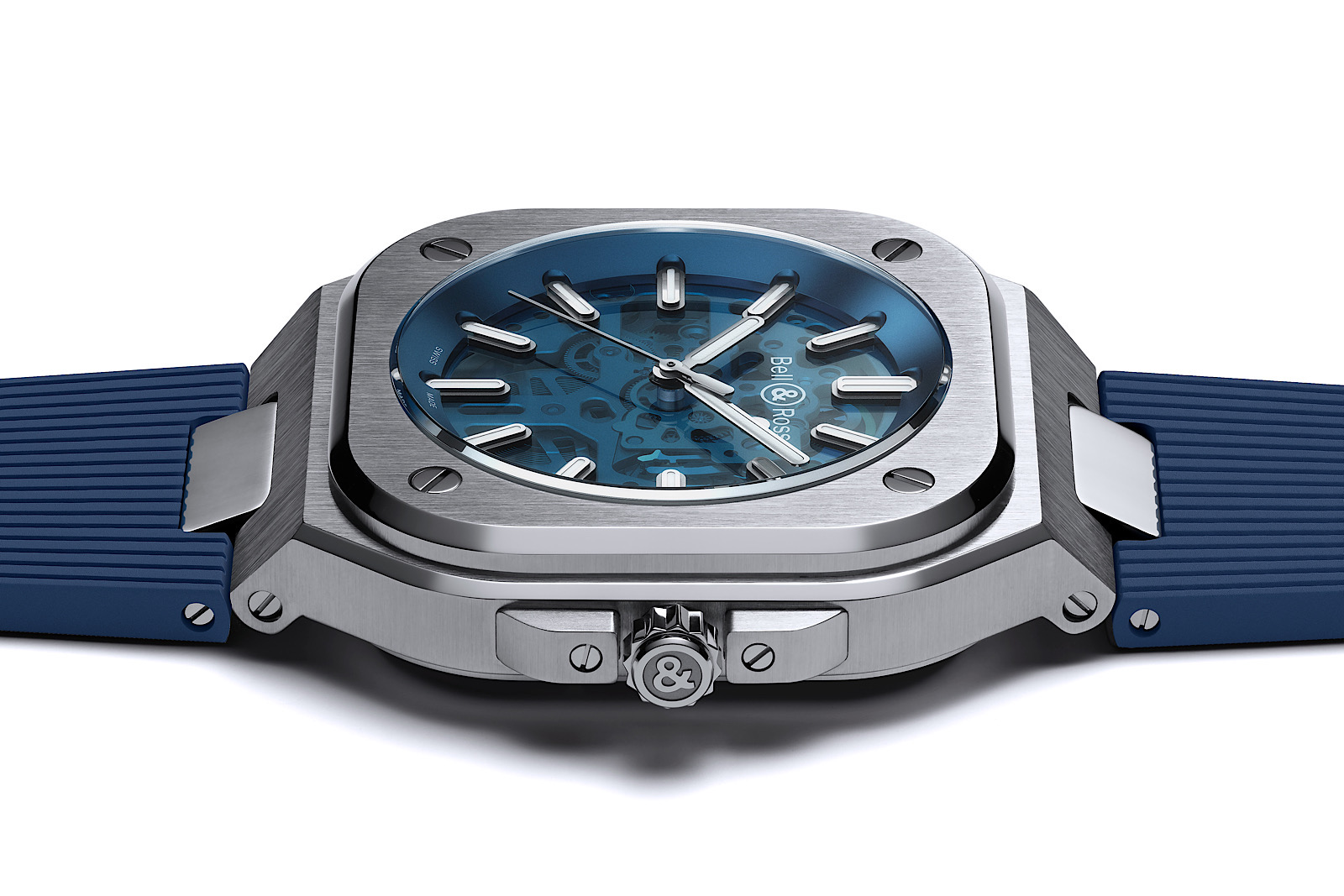 I feel that the BR 05 Skeleton works better as a whole, compared to its solid-dial counterparts. The open-worked movement enhances the visual depth of the watch. While the blue-tinted dial adds a twist to the look of the watch, it does partly obscure the skeleton movement.

Because of the tinted dial, the movement doesn’t appear as crisp and intricate as on last year’s model with an open dial, meaning it had no dial and the hands and hour markers sit on the movement. The tinted sapphire dial adds an additional layer over the movement, which diminishes the perceived depth of the dial slightly.

For that reason, I still prefer the original BR 05 Skeleton as the open dial complements to the design better. But more broadly speaking, luxury-sports watches with blue dials tend to be more popular; the most desirable versions of the Royal Oak and Nautilus have blue dials. So it won’t be a surprise if the blue tint gives this watch a little boost.

That said, the BR 05 Skeleton costs about 50% more than the base model, making it less of a value proposition. 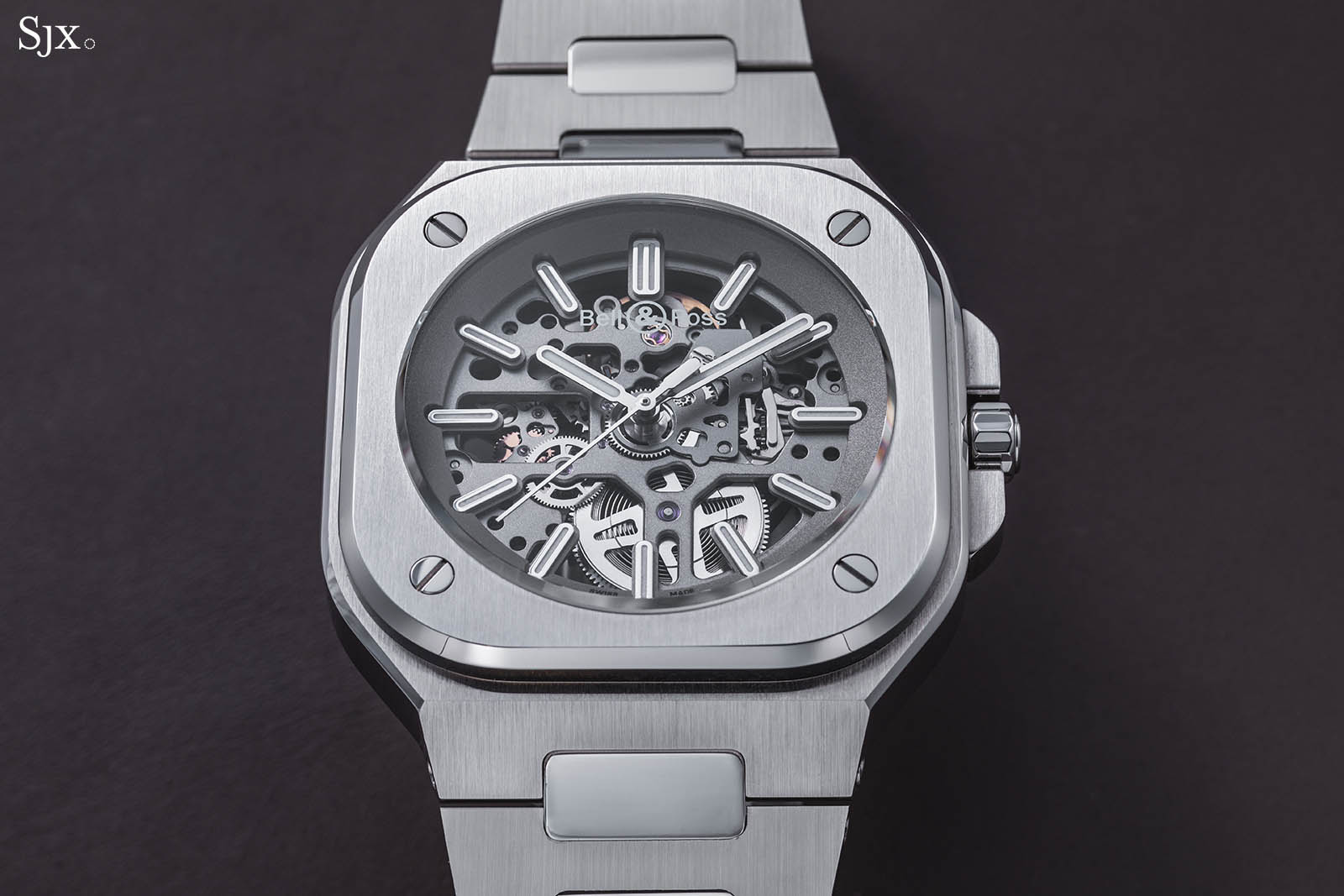 The BR 05 Skeleton with an open dial

The skeletonised dial reveals the open-worked BR-CAL.322, which is based on the Sellita SW300. It’s been thoroughly skeletonised, with the main plate open worked to show most of the gear train, barrel, and balance spring from the front. 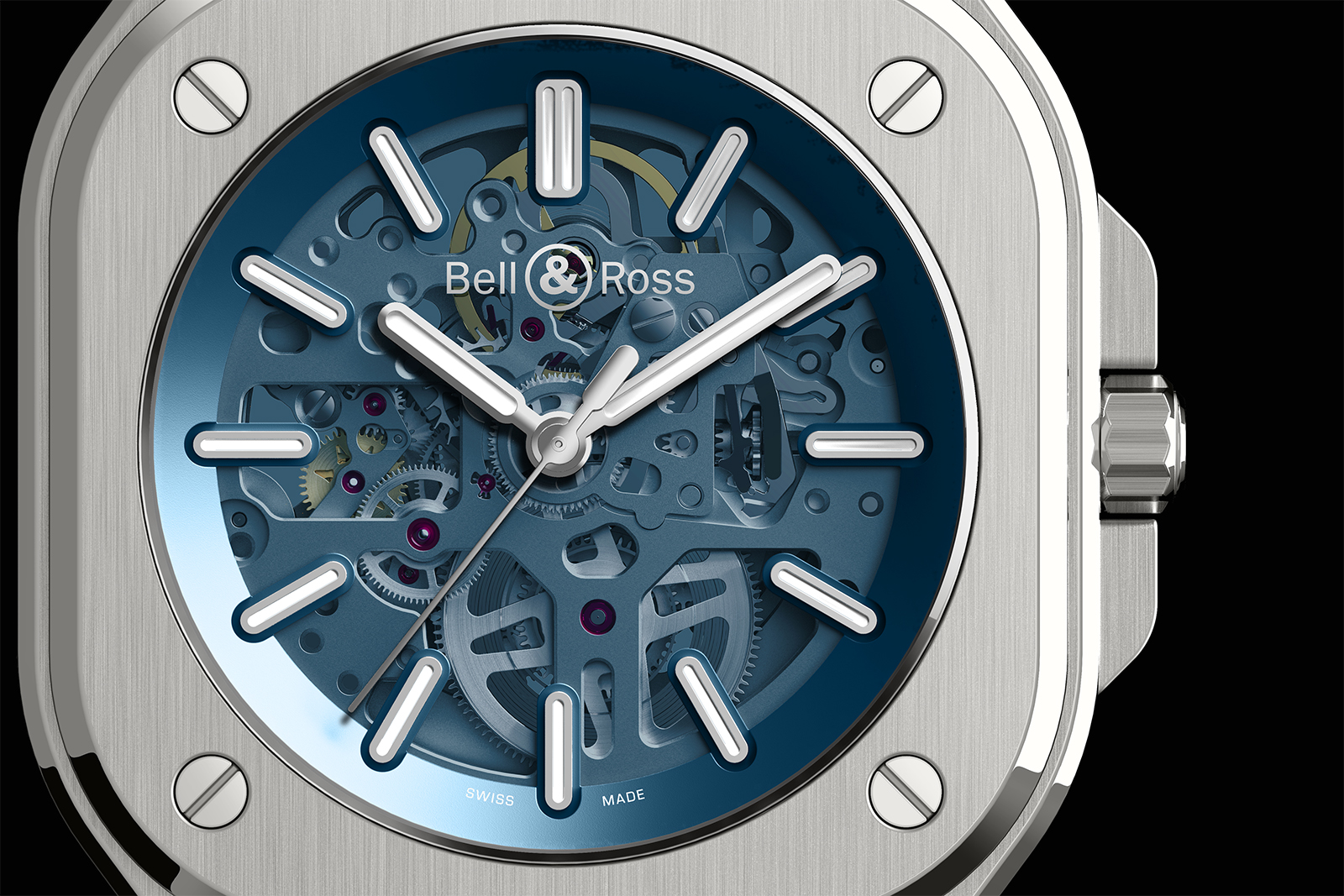 Visible through the back is the oscillating weight that spans the full movement, which has been cleverly designed to be asymmetrically weight so that it’s heavier one side, allowing it to wind the mainspring. The rotor is also coated blue to match the sapphire dial.

And expected of a skeletonised watch in this price range, the finishing of the movement is industrial and no-frills, with most of the components being sandblasted and plated. That said, it is appropriate for the utilitarian and urban feel of the watch. 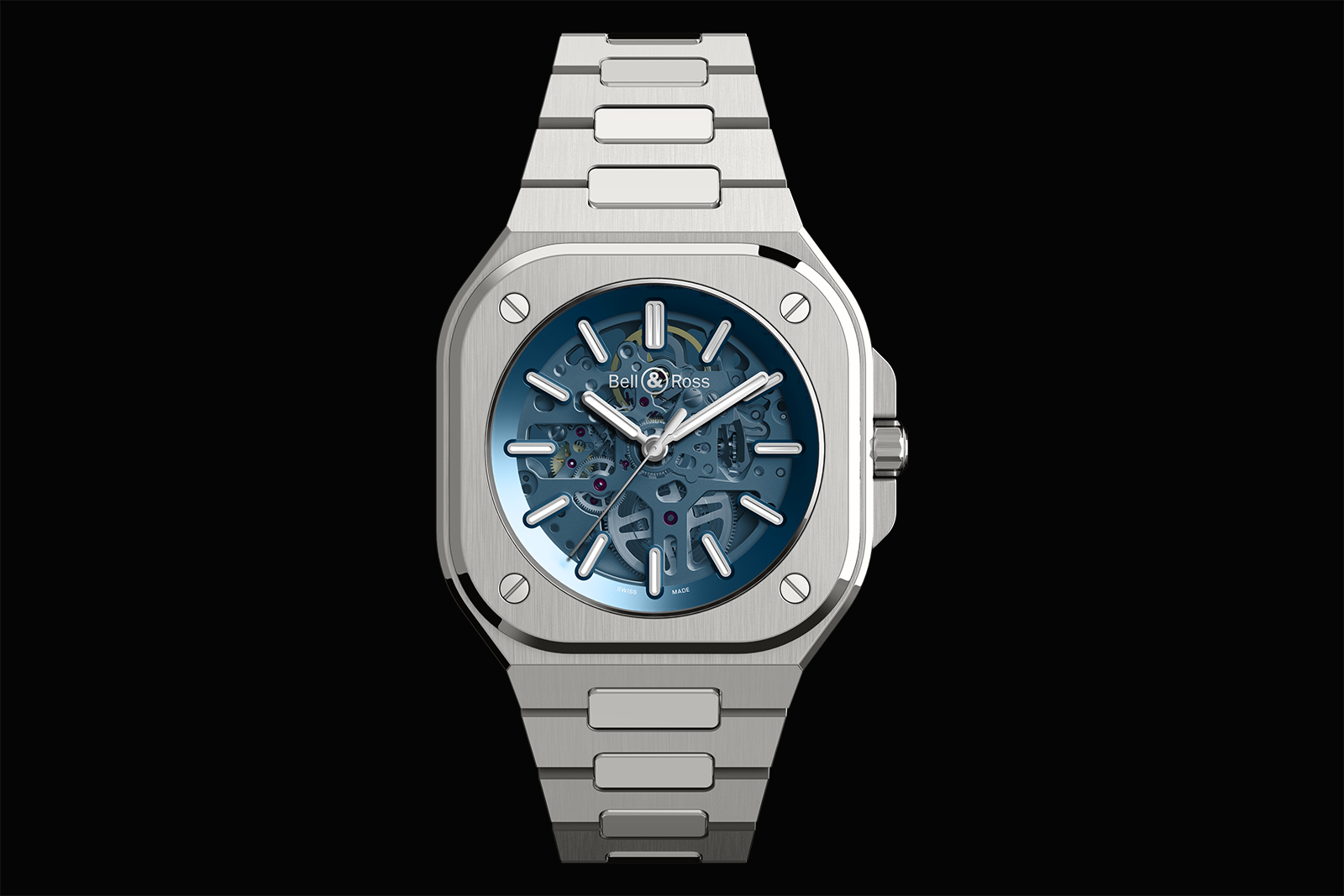 The BR 05 is available on either a rubber strap or steel bracelet, but having tried on the version with a bracelet – that is the obvious choice. The links have a good range of movement, so the bracelet drapes across the wrist comfortably. In fact, the bracelet is quite possibly my favourite element of the BR 05.

Visually, the bracelet integrates into the case extremely well, as the lugs are gently angled to meet the first link. In terms of detail, the bracelet also complements the finish of the case with its similar brushed-and-polished finish.

Interestingly, the bracelet has some historical precedent for Bell & Ross, which is also a point of appeal. It is reminiscent of the Type Demineur, a watch made for Frances’ civil-defence agency in 1996, which had a similar bracelet. And that bracelet in turn is almost identical to the bracelet used by most Sinn watches at the time (and still a handful of its models today), as the German brand produced watches for Bell & Ross in its early years. 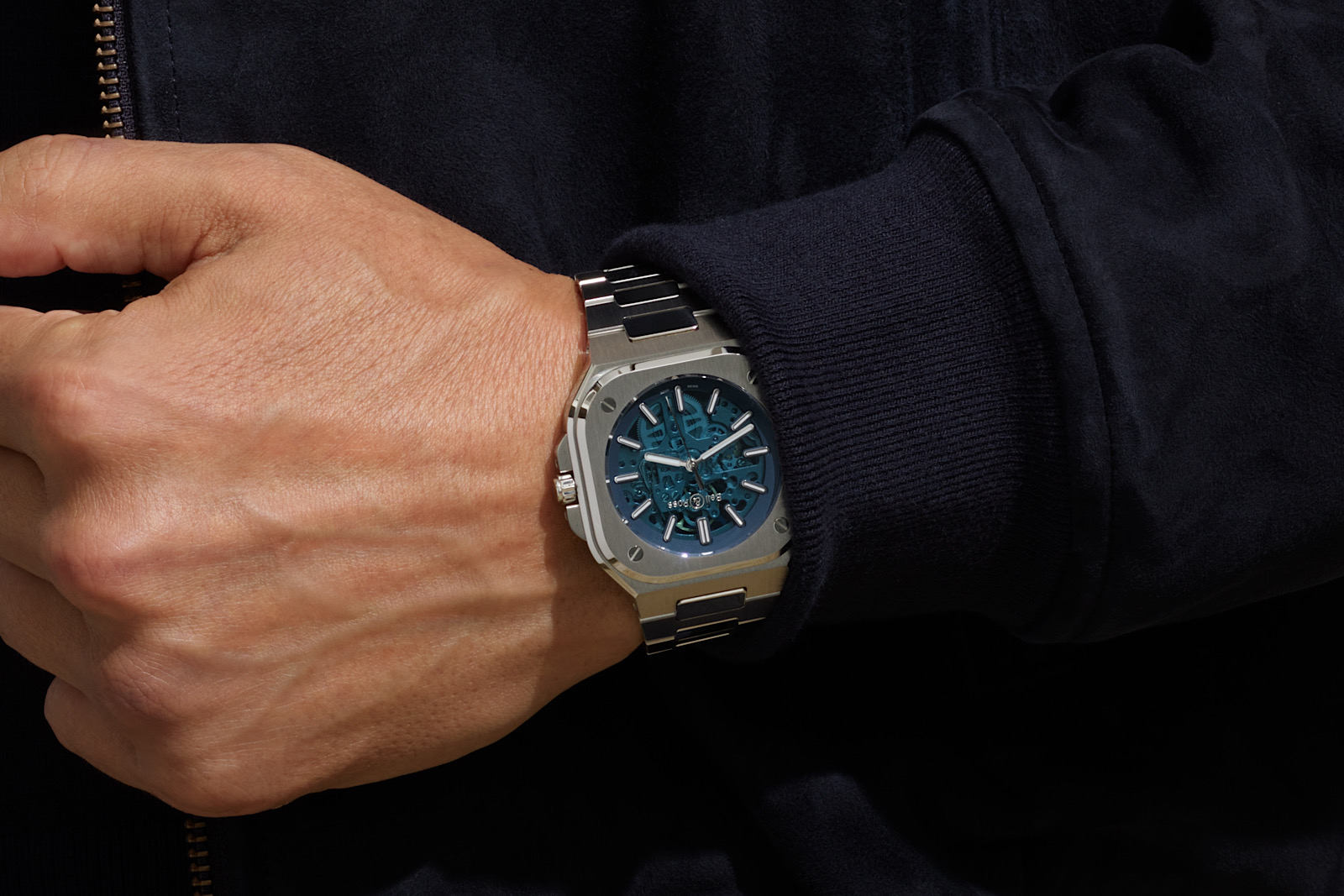