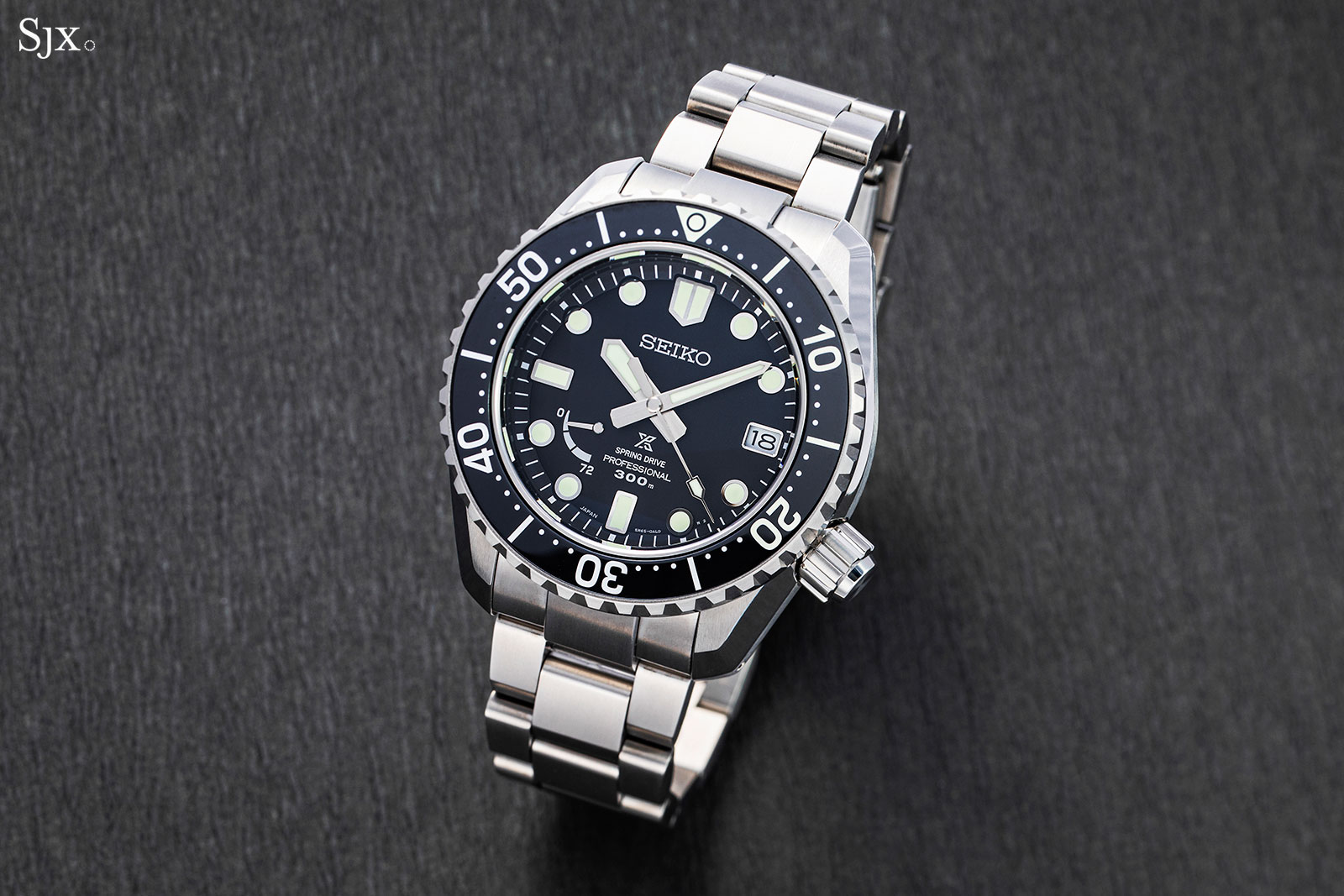 Seiko produces a wide – really wide – variety of dive watches. Many are based on historical watches, with several of the high-end models in particular being inspired by the brand’s first 300 m dive watch of 1968. As a result, a good number of Seiko dive watches look pretty similar.

When Seiko unveiled the Prospex LX line at Baselworld last year – the range is made up of six sports watches catered for air, land, and sea – the diver’s watch seemed, well, pretty similar to other Seiko dive watches. But the LX was not a typical range of sports watches, because it was designed in collaboration with Ken Okuyama, one of Japan’s most famous car designers – specifically, Mr Okuyama is best known for his work for Ferrari.

The Prospex LX Spring Drive Diver SNR029 is a typical Seiko dive watch – it’s functional and solidly engineered, with a notably high quality of construction. But Mr Okuyama’s design adds a surprising degree of refinement to the design, which reimagines the retro style of the classical Seiko Hi-Beat diver of 1968 by sharpening the design and refining the details. Seiko dive watches are highly regarded for their strong price-performance ratio at every level of the price spectrum. The Prospex LX Spring Drive Diver SNR029 is a mid-range model, more affordable than a Grand Seiko but more upscale than the base-model Prospex diver.

In terms of functionality, fit and finish, the SNR029 scores highly. Legibility is excellent, Spring Drive timekeeping is essentially perfect, while the case and dial are excellent in quality, and the bracelet is good enough. On the wrist, the watch is wears large – it is a large watch – but lightweight because it is entirely titanium (save for a few parts of the clasp). That makes it easier to wear than similarly sized Seiko dive watches in steel.

Titanium alloys are fairly prone to scratches, so the titanium case and bracelet have a “super-hard coating”, also know as Diashield, that increases the surface hardness so it scratches less easily. Although Seiko is mum about what exactly the coating is, it is likely a thin layer of ceramic of the sort typically used for industrial applications to increase corrosion resistance and minimise surface wear from friction.

Though I didn’t perform a scratch test on the SNR029, my experience with the coating on other Seiko watches is positive: the “super-hard coating” does reduce scratches and other marks, though it cannot prevent them entirely.

But many of the obvious features of the watch – namely the Spring Drive movement and coated titanium – have long been found in Seiko dive watches. What the SNR029 apart from are small, but useful details, like the increased number of removable links, as well as thoughtful design courtesy of Ken Okuyama.

A high-profile Japanese designer best known for his work in the automotive industry, Mr Okuyama had stints at General Motors and Porsche, but his most prominent role at Pininfarina, once the go-to designer for Ferrari. As design director at the Italian studio from 1995 to 2006, Mr Okuyama led the design of the Ferrari Enzo and 599, as well as the Maserati Quattroporte, amongst others.

I got to chat with Mr Okuyama at Baselworld last year, and gained a greater understanding of his design philosophy. Specifically, his approach to designing luxury or high-end goods is based on the opinion that such products should timeless and long-lasting. As a result, the design should be evolutionary rather than a radical makeover, so that consumers can grasp the aesthetic lineage from generation to generation. That not only helps build the identity of the brand, but also ensures a product does not look dated, even if it is an older model. In other words, good design is functional but also ensures the perceived value and desirability of a product is preserved.

In his opinion, Western luxury goods firms, notably in fashion and automobiles, are especially good at that. And that was exactly what he set out to do with the LX – refine and sharpen the essence of Seiko’s historical dive watches so that it is instantly recognisable as a Seiko, yet also a modern creation and not a remake. Unsurprisingly, the SNR029 is instantly recognisable as being descended the first “professional” diver.

Seiko has already made approximate and exact remakes of the 1968 originals several times in the past, including a spot-on remake in 2018, and another faithful “re-creation” just this year. In contrast, the SNR029 (and its siblings in the LX range) are distinctly modern, having been redesigned substantially – down to the smallest detail like the crown – yet clearly descended from the 1968 model. Tellingly, the SNR029 is almost exactly the same size as the 1968 diver: it measures 44.8 mm wide and 15.7 mm high, compared to 44.0 mm by 13.95 mm for the original. Even though the dimensions are near-identical, the case design and construction are entirely different.

Essentially, the SNR029 has a case that is similar to the remakes as well as the earlier generation of Prospex divers, but the lines have been tightened up for a more purposeful design. The SNR029 has a more sculpted, aggressive stance that brings to mind some of Mr Okuyama’s car designs like the Kode 57.

And it also has a screw-down case back, as oppose to the one-piece, monocoque case of the vintage original. The three-part case construction is the key reason for its increase in height compared to the original. 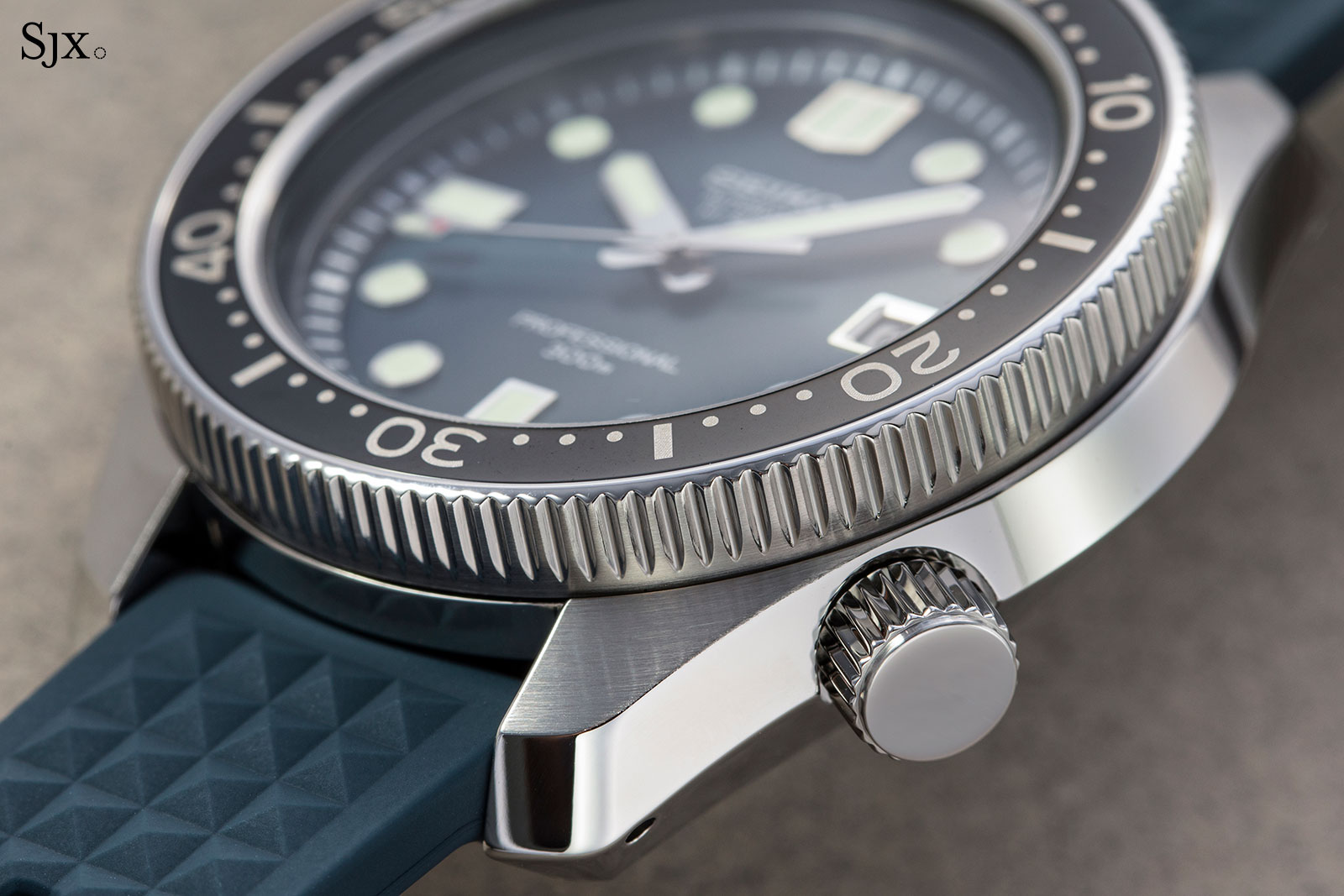 Compared to the recently announced remake of the 1968 original, the SLA039 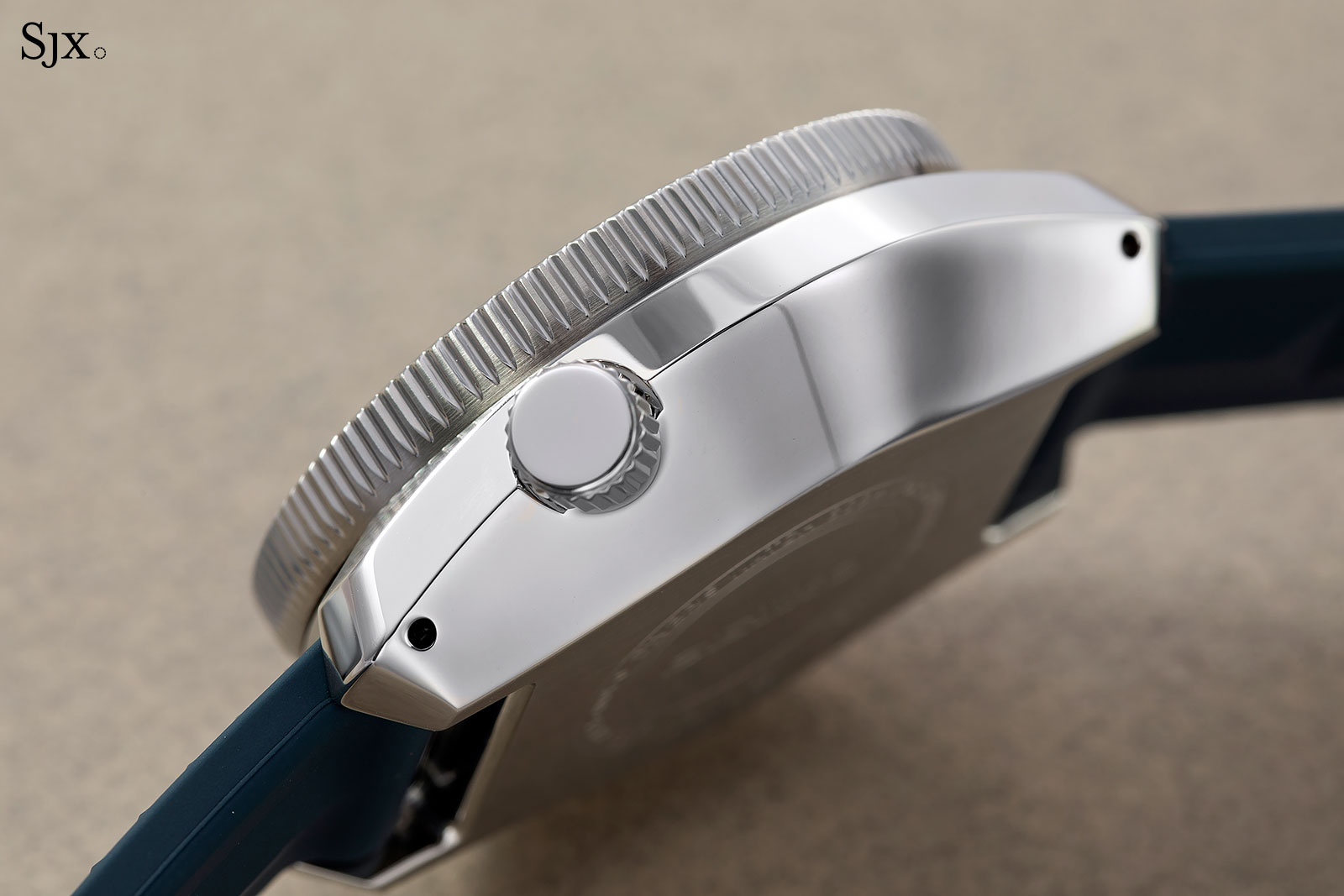 The one-piece case of the vintage remake

But it is in the littlest of details that the SNR029 reveals the excellent design (and also excellent quality of machining). Thoughtful design can be found on the crown and bezel, which now have a more geometric, industrial look.

Taller and wider, the crown has the resolute look of a diving tool, and is also easier to operate because of its larger size. And the bezel edge has wider, hexagonal notches that articulate a strong, functional beauty. 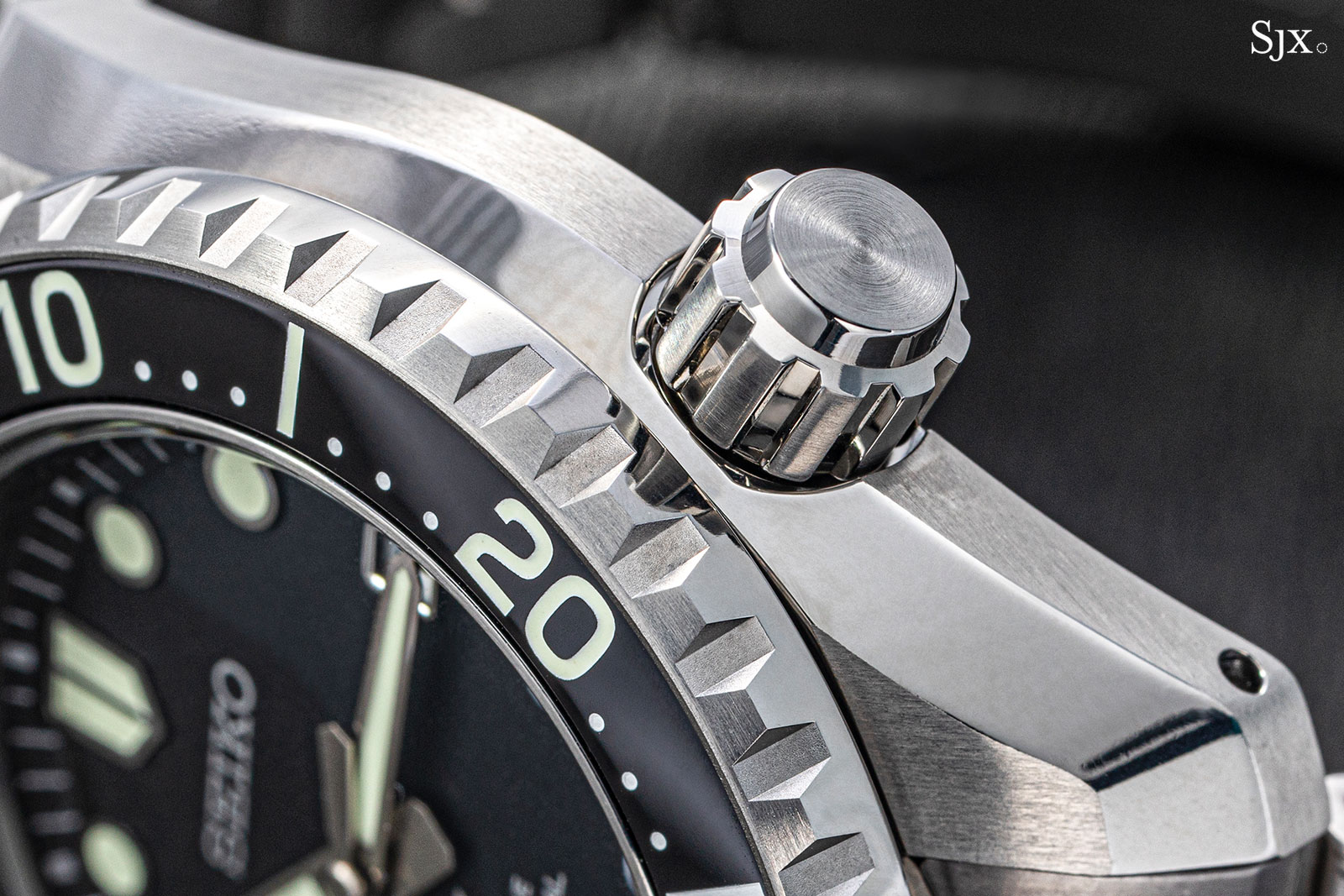 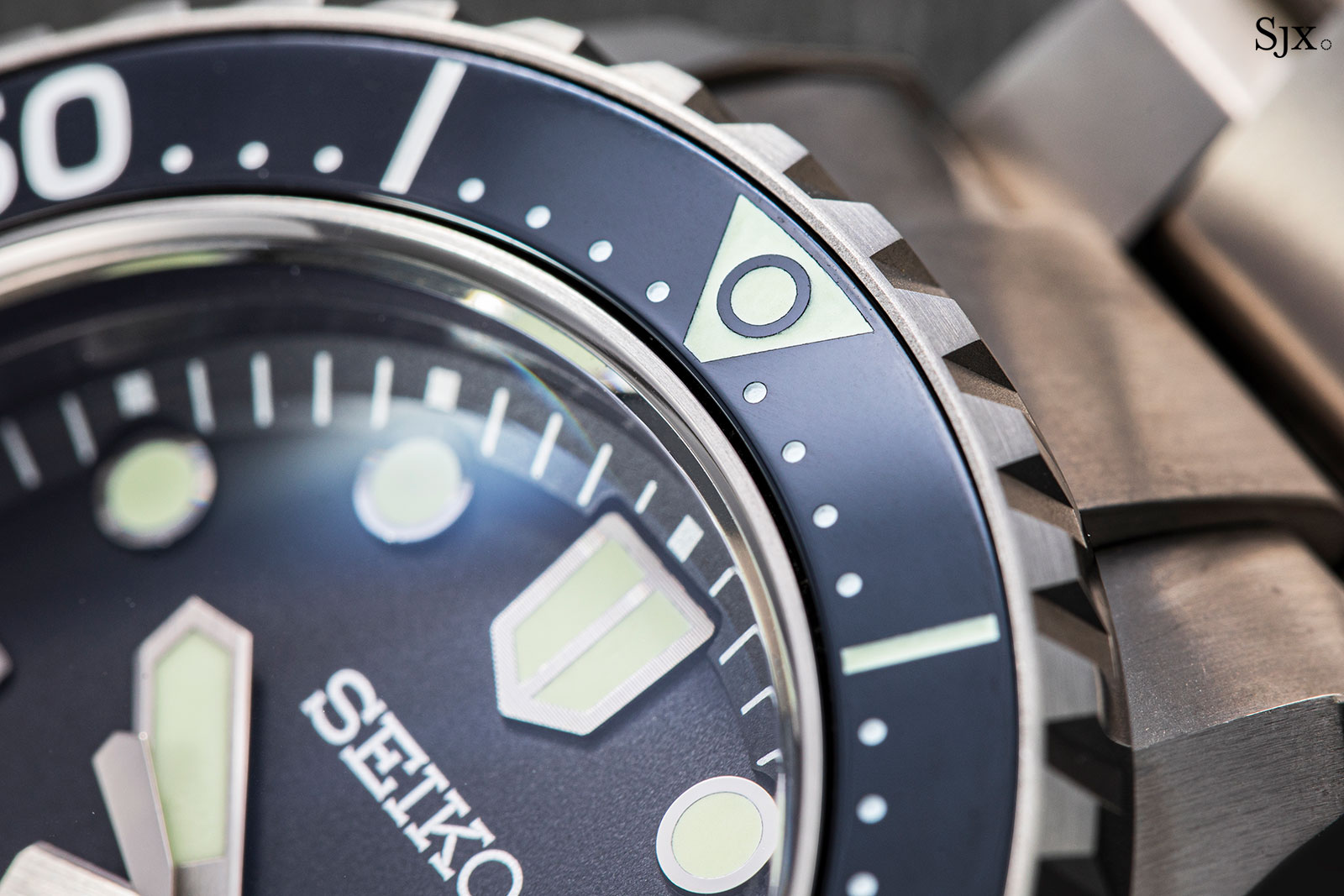 The 5R65 movement inside is hidden under a solid, screw-down back but its qualifications to be in a dive watch are clear.

Because the 5R65 is a Spring Drive calibre – a mechanical movement regulated a high speed flywheel controlled by an electronic “brain” – its timekeeping is less susceptible to deviations caused by environmental factors like temperature fluctuations, shock, or magnetism. A Spring Drive is, in short, more robust than the average mechanical movement, but it is also self-winding, so there’s no need to worry about a flat battery.

And the 5R65 is actually a dressed-down version of the 9R65 movement found in several Grand Seiko watches. Both are functionally identical, with exactly the same specs, namely a 72-hour power reserve and timekeeping of within a second a day, or 15 seconds a month. But the 9R65 has decorative finishing, while the 5R65 only features stripes on the rotor, with the rest of the movement being unadorned.

The dial is typical Seiko dive watch style, which means terrific legibility and sensible layout (and several lines of text).

Like the case, the dial retains the feel of the vintage original, but has been sharpened – literally. Both the minute and seconds hands are now tapered, though the hour hand is a conventional oblong shape. Likewise, the 12 o’clock hour marker is gently tapered. All that tapering gives the dial a more assertive look. 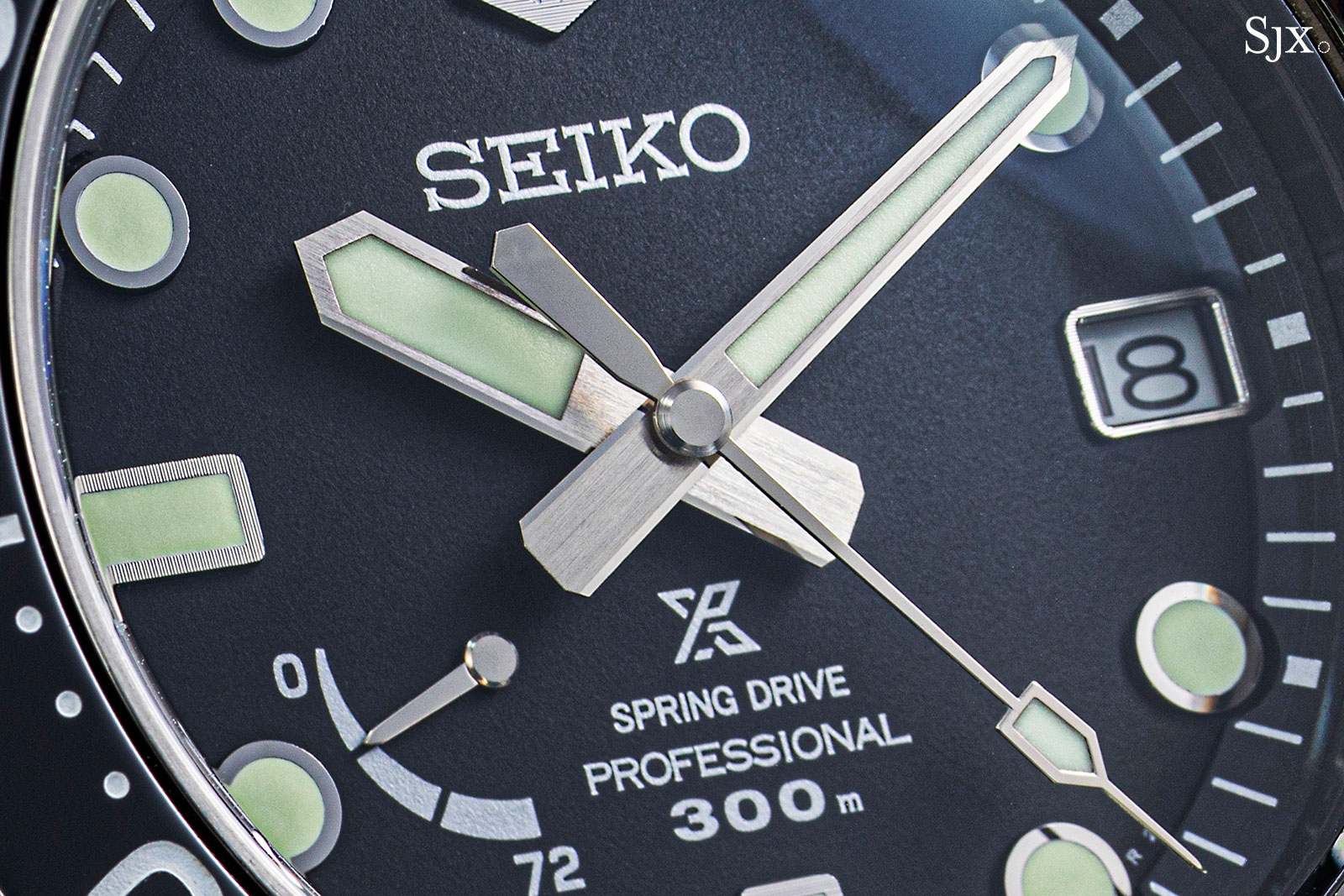 And the less important elements of the dial has been reduced. The frame for the date window, for instance, is thinner than on other Prospex divers, while the power reserve uses a fuss-free, printed scale instead of an applied metal marker. While an applied power reserve scale is fancier, and looks at home on a Grand Seiko, the basic printed scale works best here. The date disc is white, which makes it easy to read, but a black disc would blend in better The one element of the dial that is slightly superfluous are the markings above six o’clock. It’s crowded with the Prospex logo, three lines of text, plus the power reserve to the left. That’s a bit too much for a professional’s tool, but the markings are standard for all Prospex dive watches so they can’t be done away with. 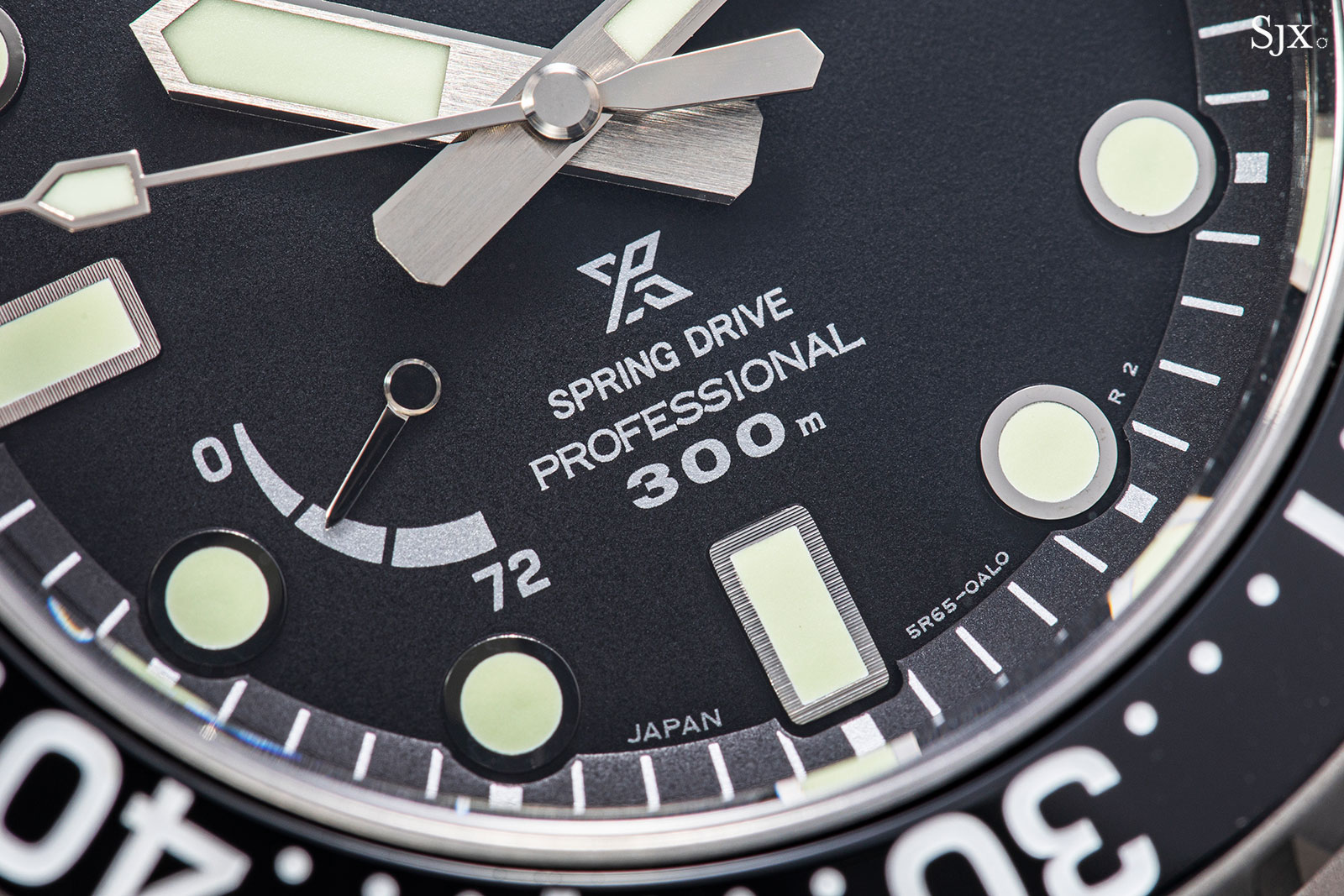 Every element of the dial possesses an strong mechanical quality, precise in sharp and form. The hands have neat edges and surfaces, and even caps over the axes for the seconds and power reserve hands, so that the pinions below are hidden.

And the hour indices boast an unexpected level of detail: they are stamped and then engraved with a narrow, linear pattern that enhances the “tool watch” look. Like the case, the bracelet is titanium, with the usual features of a Prospex diver bracelet, namely a ratcheting extension incorporated into the clasp. It is a simple, intuitive design: lifting the safety buckle to the extreme releases the mechanism, allowing the extension to slide out from the clasp.

Unlike the other parts of the watch, the clasp is purely functional; it genuinely looks like a tool. Most of the moving parts in the clasp are steel, while the rest are titanium. All the parts are stamped, but substantial and solid.

This is Seiko’s default diver’s extension clasp, with the same mechanism found on all models, from the entry-level to Grand Seiko, but executed with different degrees of finish. Being a mid-range watch, the SNR029 has a modestly-finished clasp that is not as refined as the equivalent on a Grand Seiko, but also not as basic as that on the base model diver. 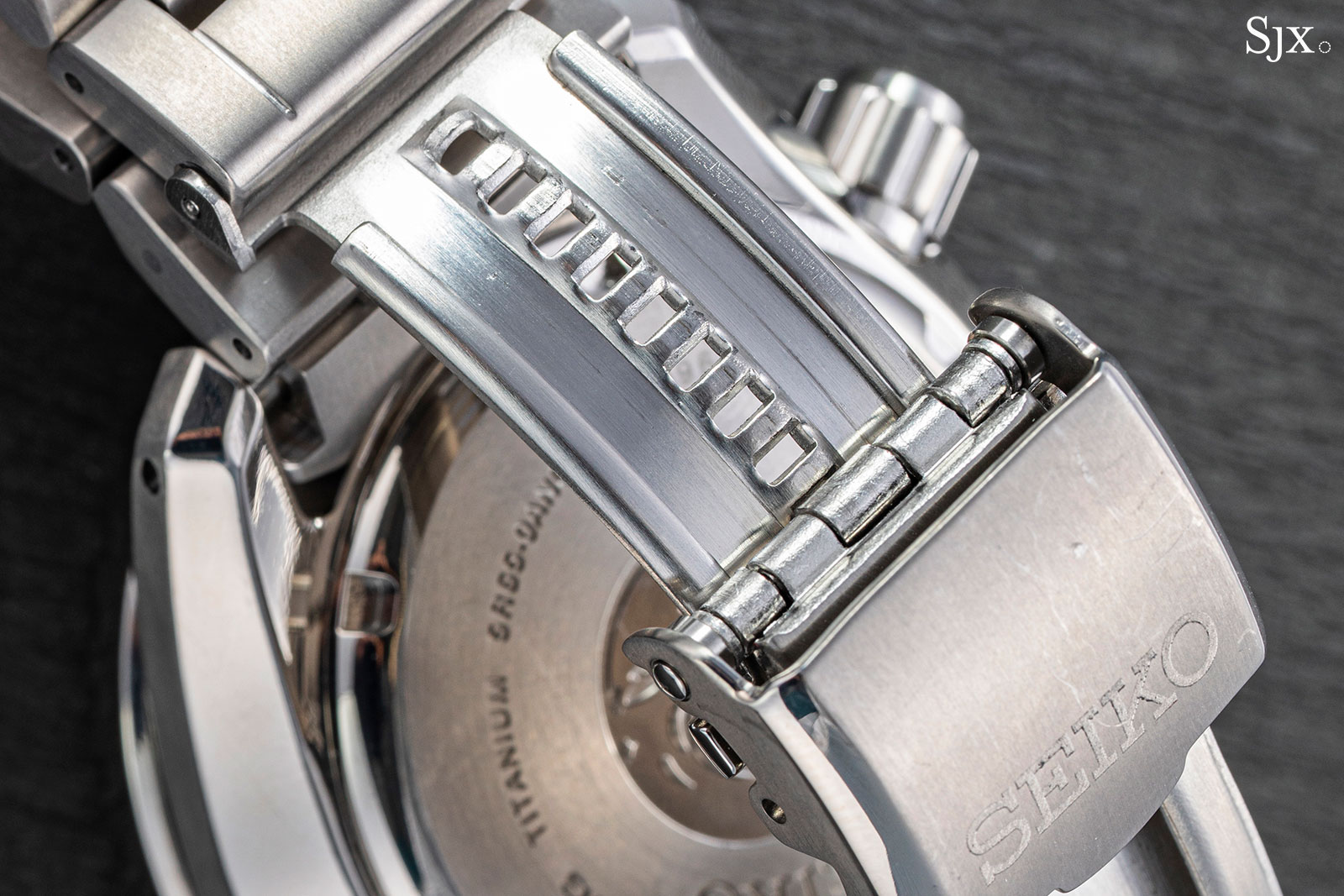 Design-wise, the bracelet works well with the case. The bracelet links are simpler in style than those of most Prospex bracelets, which usually have polished borders on the middle link. The simplicity suits a dive watch, but the bracelet still has a bit of embellishment, a bevelled lower edge that neatly echoes the shape of the lugs. Each link is secured by a friction-fit pin and tube, a tried and test method that is foolproof and secure, but it is not terribly user friend as the links are pretty fiddly to adjust.

That being said, every link is held by pin, which means there is no limit to the number of links that can be removed, which helps achieve a good fit. In contrast, most earlier generations of bracelets only featured a limited number of removable links, making it impossible to size just right for certain wrists. Modern day dive watches often get away from their original purpose by being over-designed or excessively elaborate. The SNR029 is very much fuss-free, with the high-precision Spring Drive movement being particularly well-suited to a “tool” watch.

While the watch is focused on what it’s supposed to be, it is also well made, with excellent fit and finish on the case and dial (and movement, even though that is hidden).