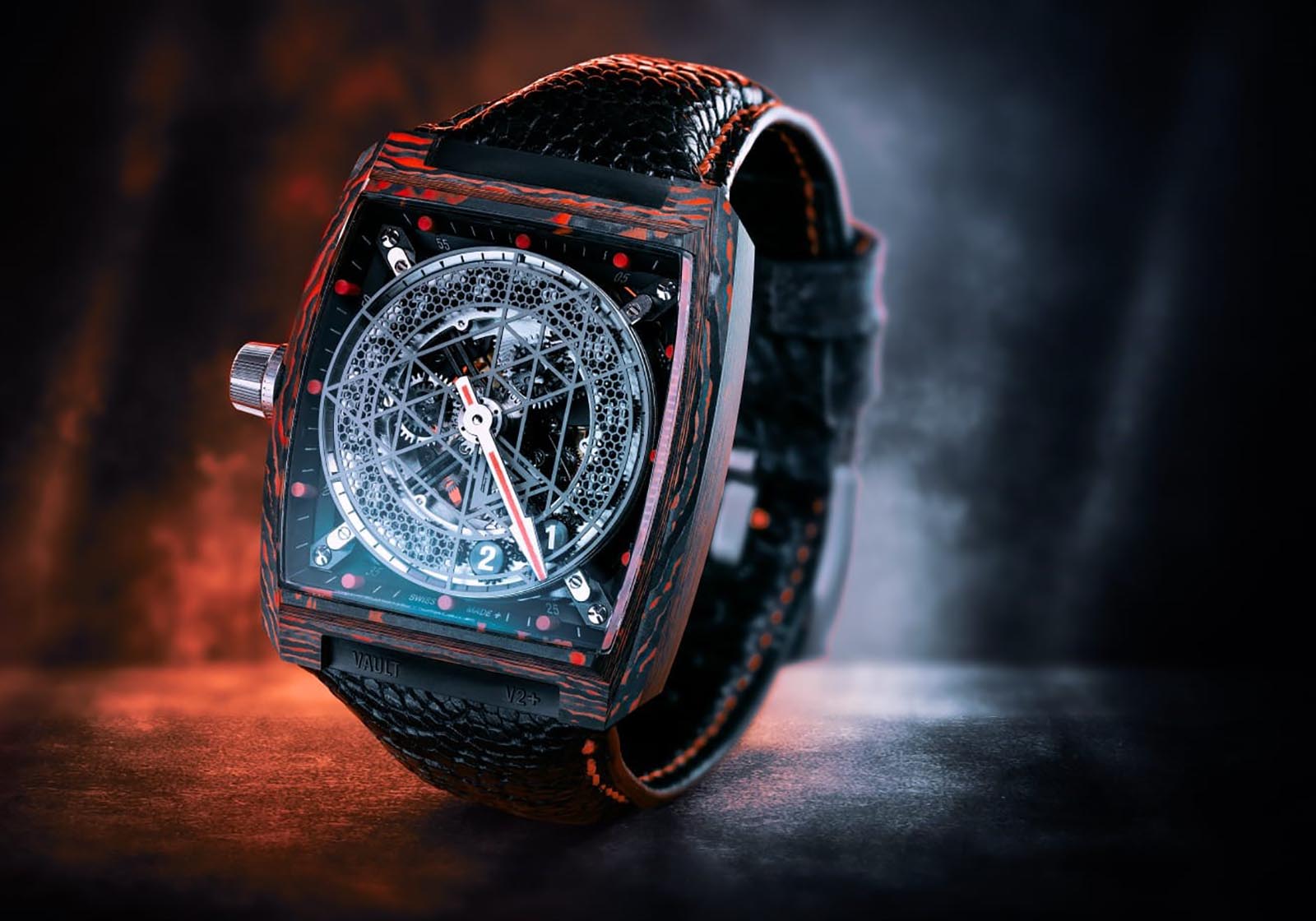 Vault, a Swiss watch brand founded in 2013 by Mark Schwarz, has just unveiled the V2+ Red CC, a unique, left-handed variant of its unusual approach to time-telling.

Inspired by a bank vault’s time lock mechanism – Mr Schwarz was both a police officer and banker earlier in his career – the brand’s watches feature a time display based on a planetary gear system, where each hour marker is actually a functioning planetary gear that travels around the dial. All of that ingenious mechanics is courtesy of UhrTeil, the complication and manufacturing outfit led by Andreas Strehler. 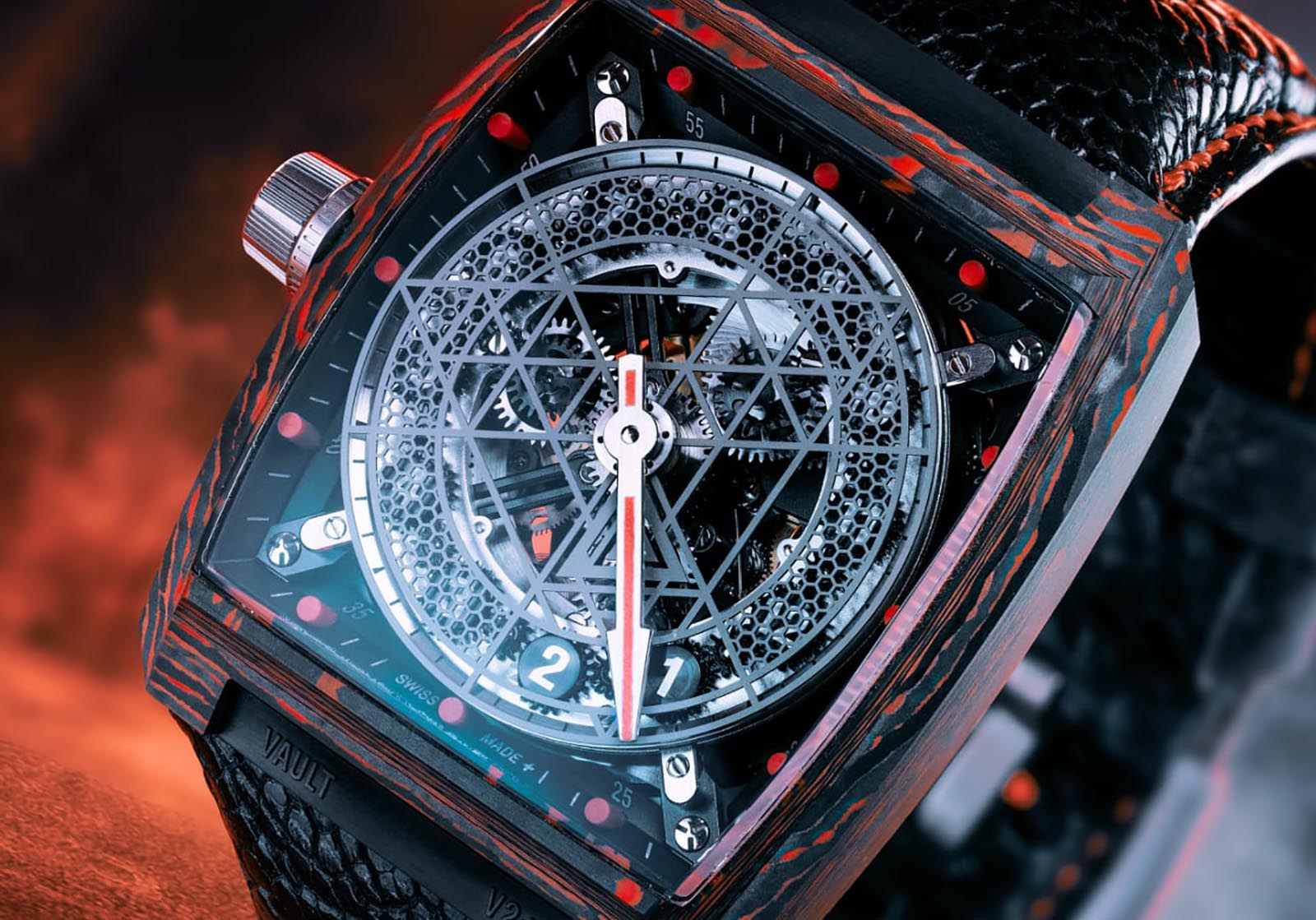 The case is made of carbon-ceramic composite, which gives it the properties of both its constituent materials – the lightness and strength of carbon as well as the hardness of ceramic. Basically, ceramic is layered in between sheets of carbon, which is then submerged polymer and baked an autoclave to create the block of composite material. As a result, it retains the distinctive striped pattern of carbon composite. 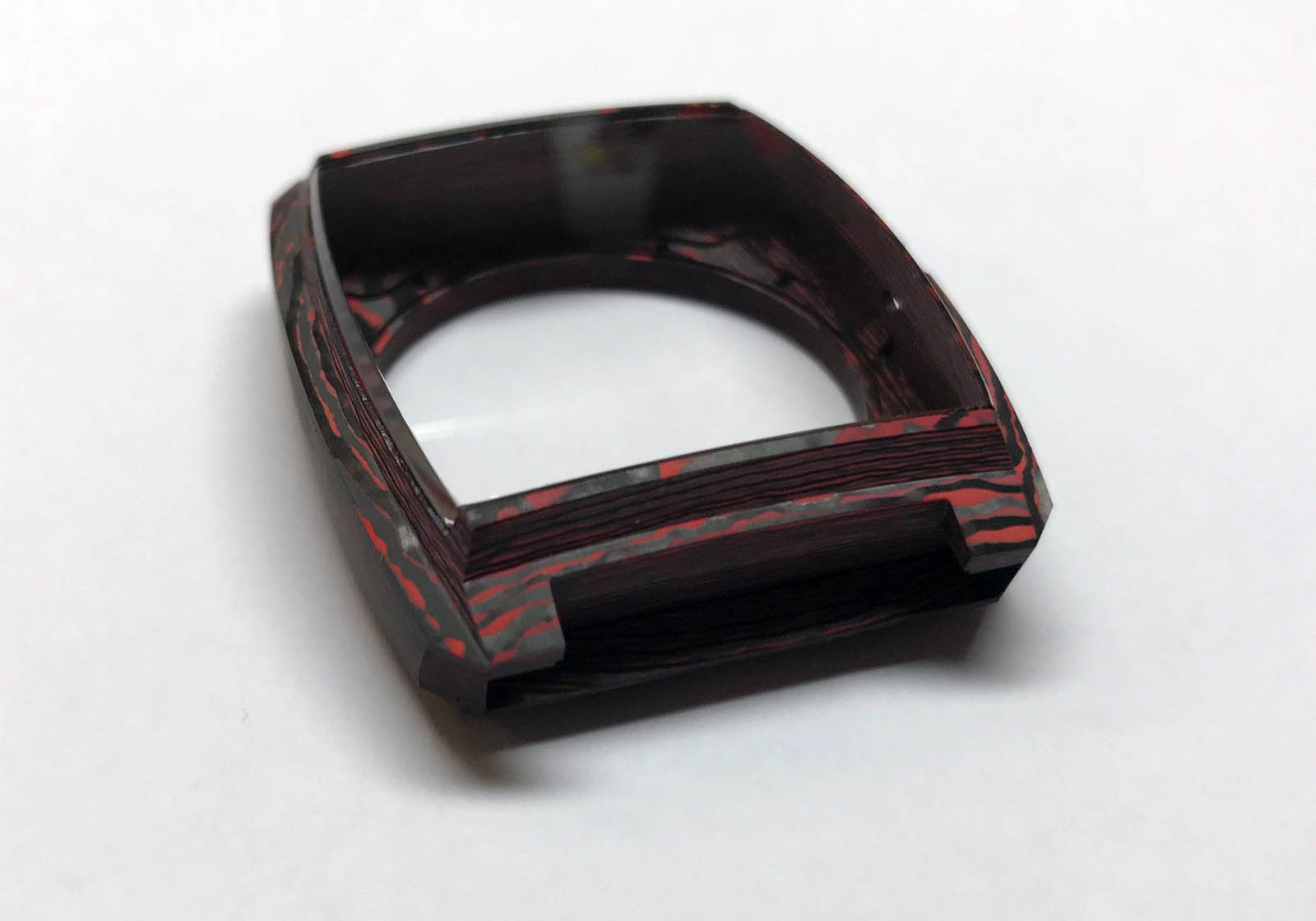 The tonneau-shaped case has a complex, multi-faceted design made up of five parts and is curved on two axis, allowing it to sit well on the wrist. It measures 39mm by 46.7mm and 15mm in height, which is thick but a necessity. That’s because the movement is essentially an automatic base calibre with a planetary display module on top. And as in the realm of such exotic time display watches, the case size is relatively moderate. 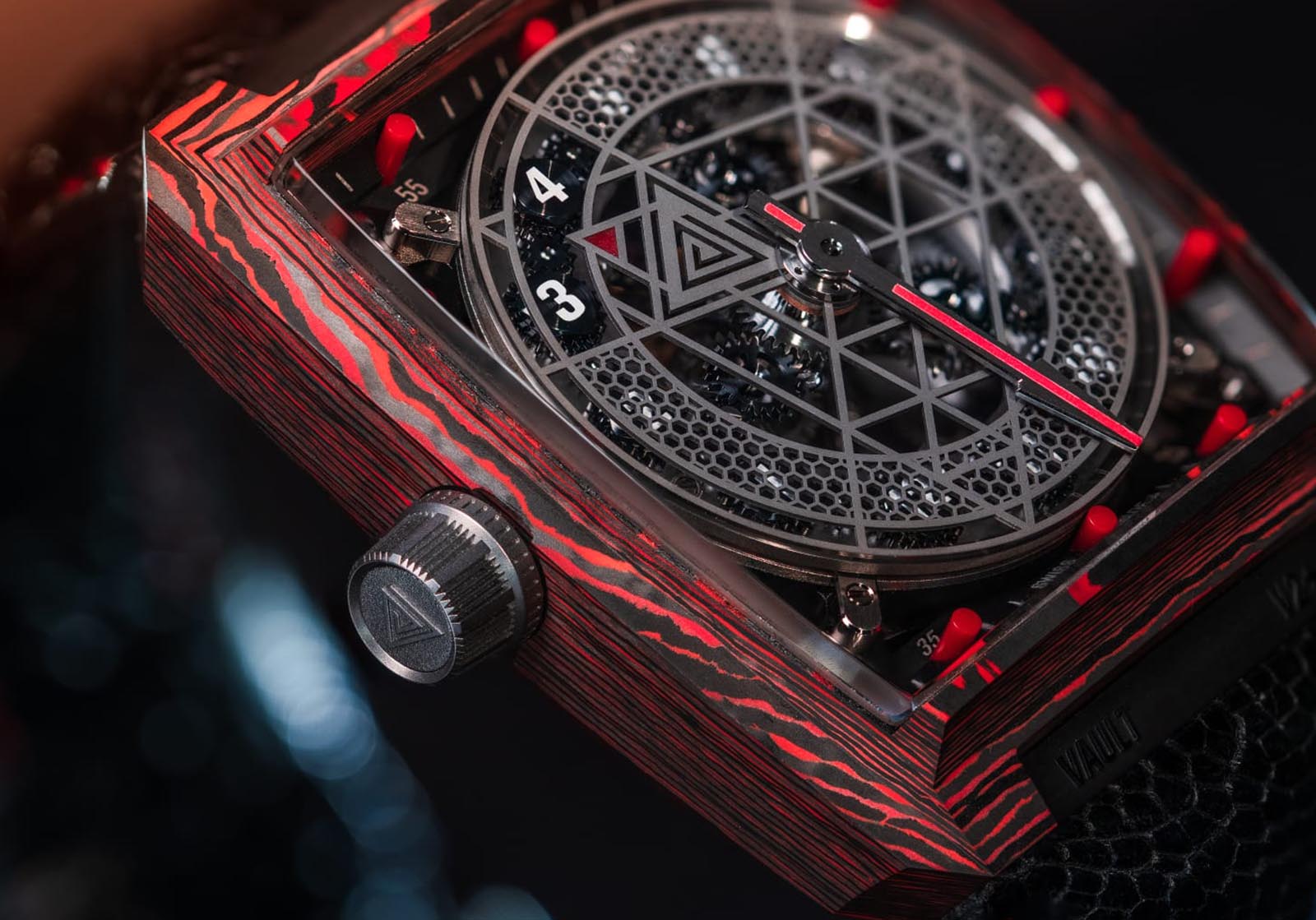 The striking appearance of the case is combined with an equally distinctive and complex dial made up of a planetary gear system.

The minutes is indicated by a conventional minute hand, while the hour numerals are indicated by 12 gears arranged in a ring that’s covered by a C-shaped disc, which conceals the other numerals to indicate the current hour.

While the C-shaped disc in the earlier models was made of sapphire, here it is titanium that’s been cut to form a honeycomb motif, incorporating a triangular hour pointer with a red luminous tip. Thus, though the dial looks significantly more complex overall, it is, in fact, much more legible as the indicator makes it clear what the current hour is, leaving little room for confusion. 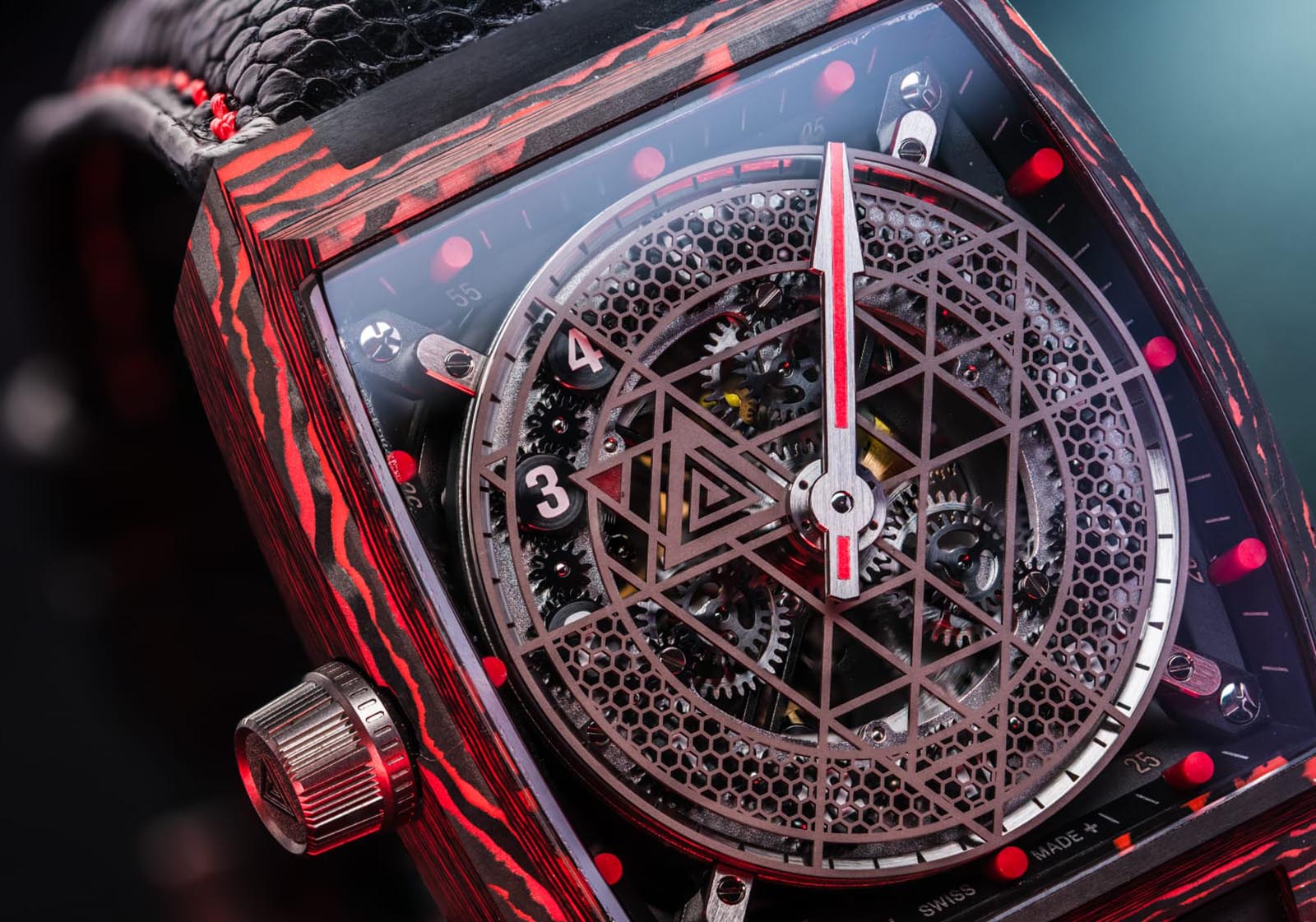 Notably, the crown is connected only to the time display mechanism, so it can only be used to set the time, and cannot wind the mainspring. The movement is geared to rotate with the crown so turning the crown to adjust the time in turn rotates the entire dial and movement, unidirectionally and simultaneously. This is aided by six rollers and three springs that hold the movement in place. And sandwiched between the movement and the time display is an “X” frame that acts as the pivot point for both the chapter ring and movement.

The dial, however, is made to rotate at 11/12 the speed of the movement so the minute hand and hour titanium disc advances relative to the dial underneath. In other words, when the minute hand makes a full revolution, the dial would have rotated 330° or travelled 11 numerals, thus time would have advanced by an hour. This is accomplished with a reduction gear. 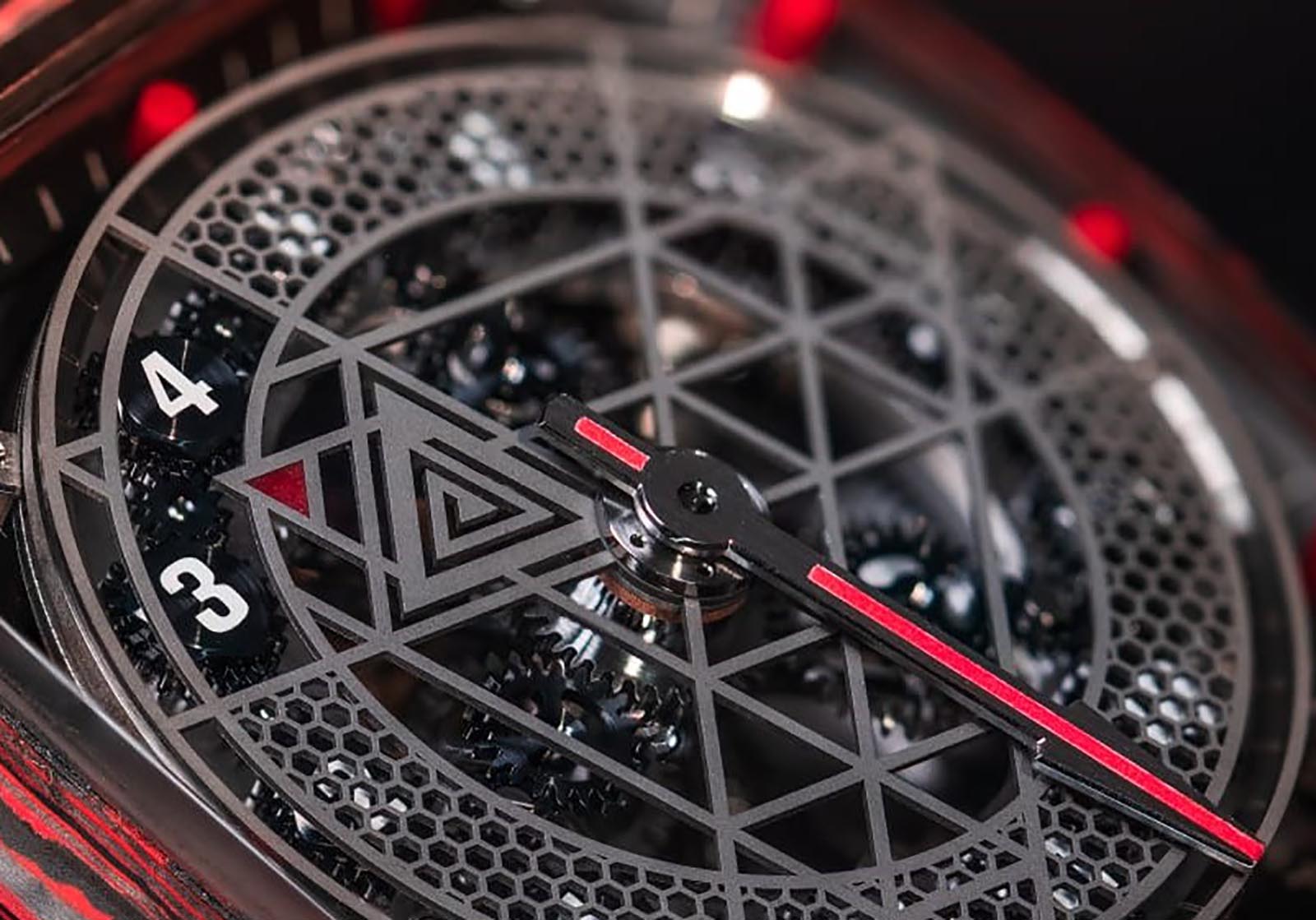 The purpose of the modular planetary gear system is simply to keep the Arabic numerals upright, which wouldn’t be possible if they were to be applied on a regular rotating disc. The solution then would be to use baton hour markers but that simplicity flies in the face of the entire watch.

Once the crown is pushed back in, the dial and movement are stationary; only the minute hand and the hour disc advance, as with any regular watch.

The movement in this iteration is an upgraded version of the calibre in other Vault watches, with a longer power reserve and a higher level of decoration. The main plate is rhodium-plated and skeletonised but it is less visible from the dial in this iteration due to the honeycomb disc.

On the back, the moving parts are held in place by individual bridges. On the edge of the movement are two laser-cut titanium bridges engraved with the brand name and reference. The rhodium-plated rotor is skeletonised and features pearl-blasted portions. 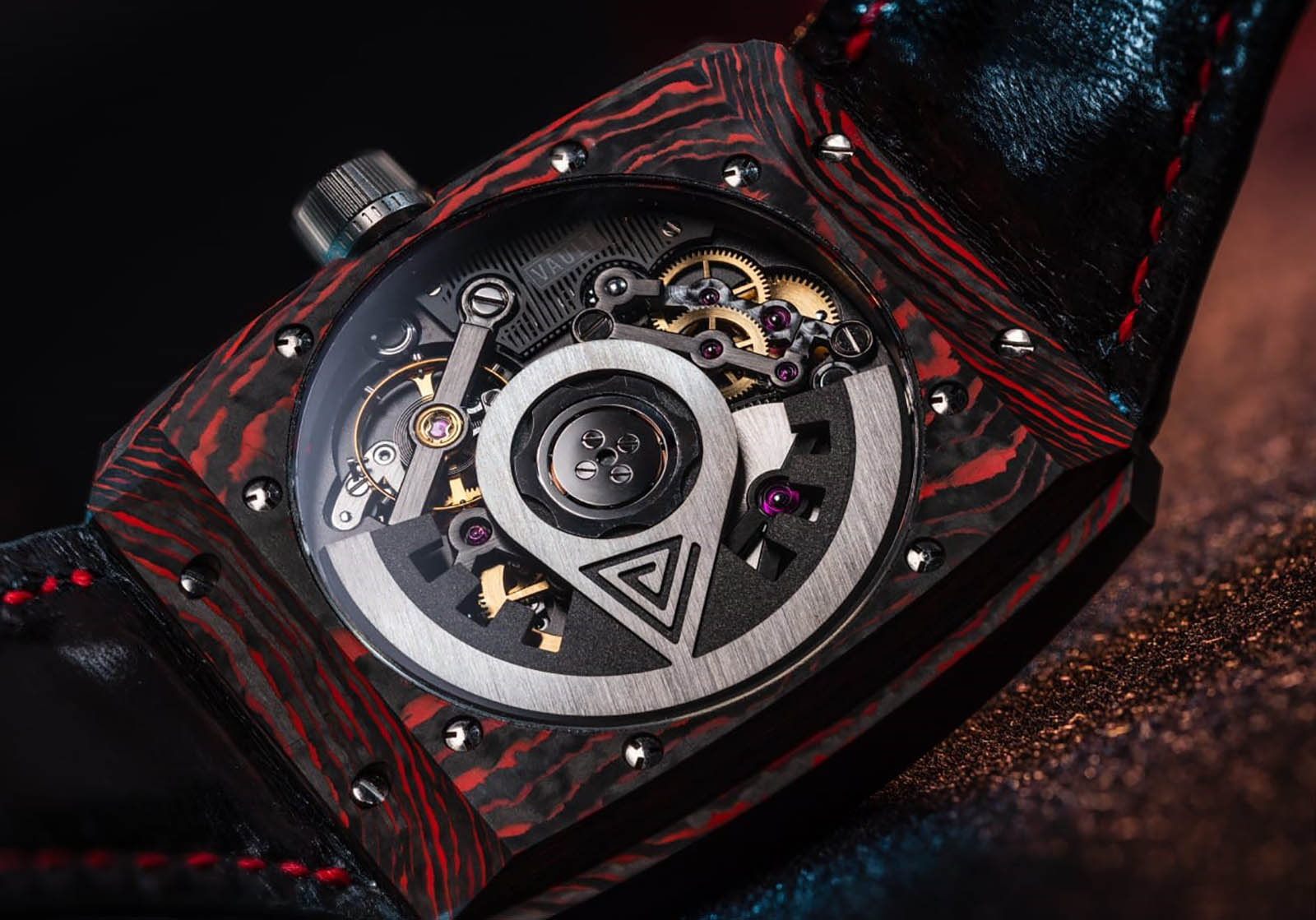 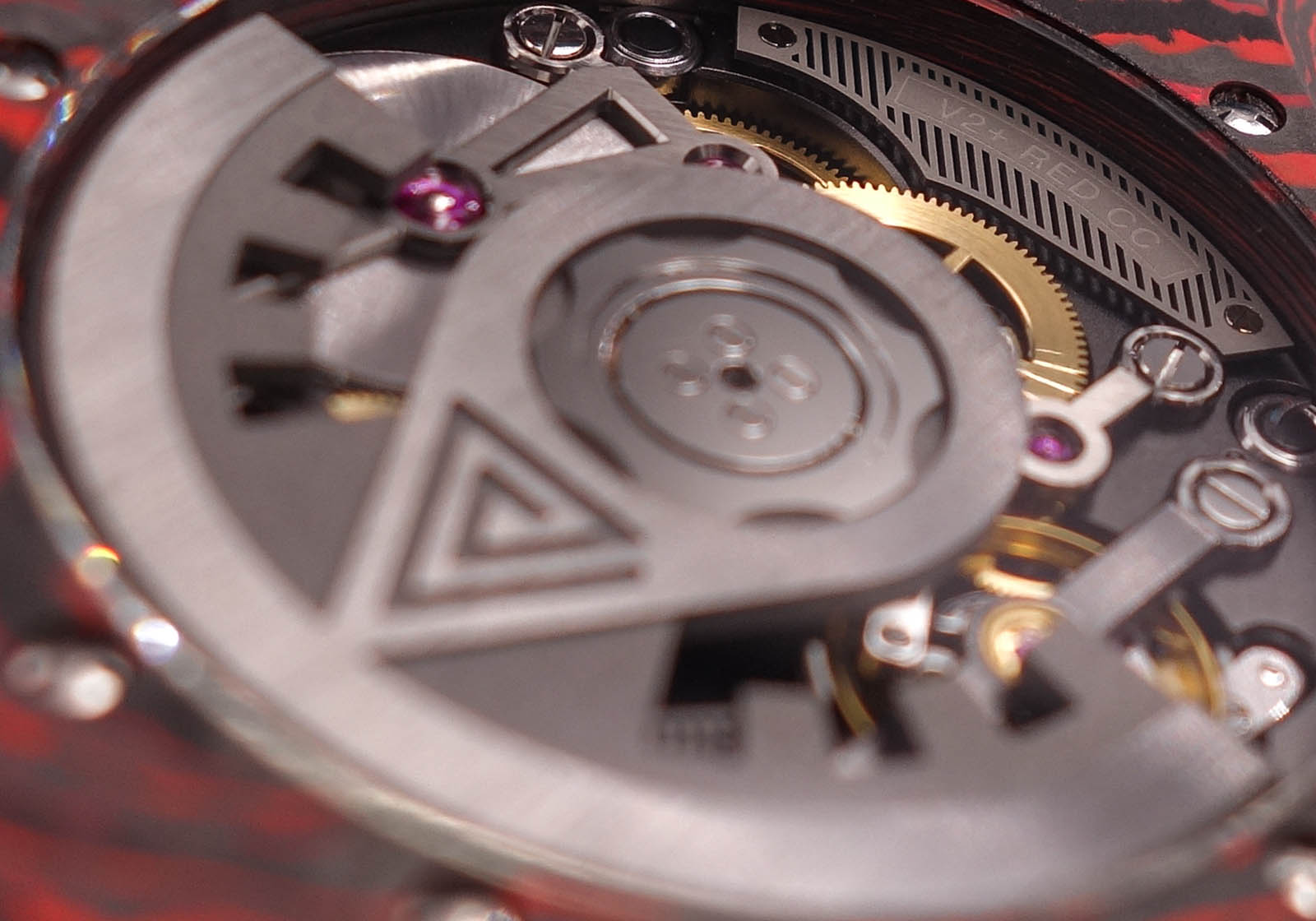 Much of the visible finishing is simply but manually done, by Bernhard Zwinz no less, a watchmaker who once worked for Philippe Dufour and recently revived the name Winnerl. The bridges and rotor are finished with straight graining, while the gears are circular grained, and the tiny bridge that holds the automatic winding wheels in place is finished with perlage. 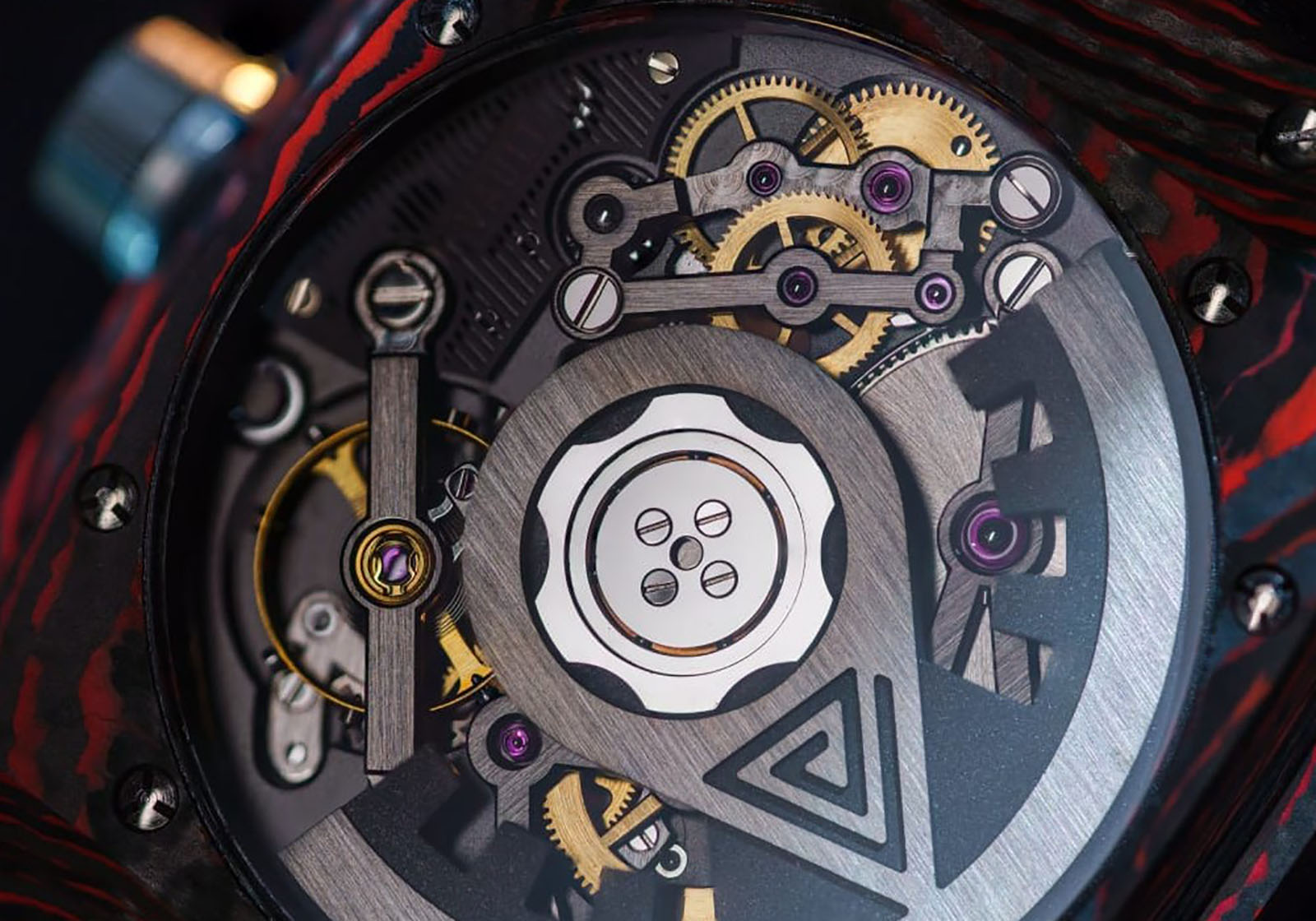 The movement has a frequency of 3Hz and is equipped with a free sprung balance wheel. And as the hour disc is made of lightweight titanium instead of sapphire, the power reserve has improved by five hours from the standard version of the calibre to 55 hours.

Strap: Ostrich shin leather
Availability: Direct from Vault
Price: Unavailable, but the V2 base model will start at 37,500 Swiss francs

The watch case is light, strong and finished in primary colours.