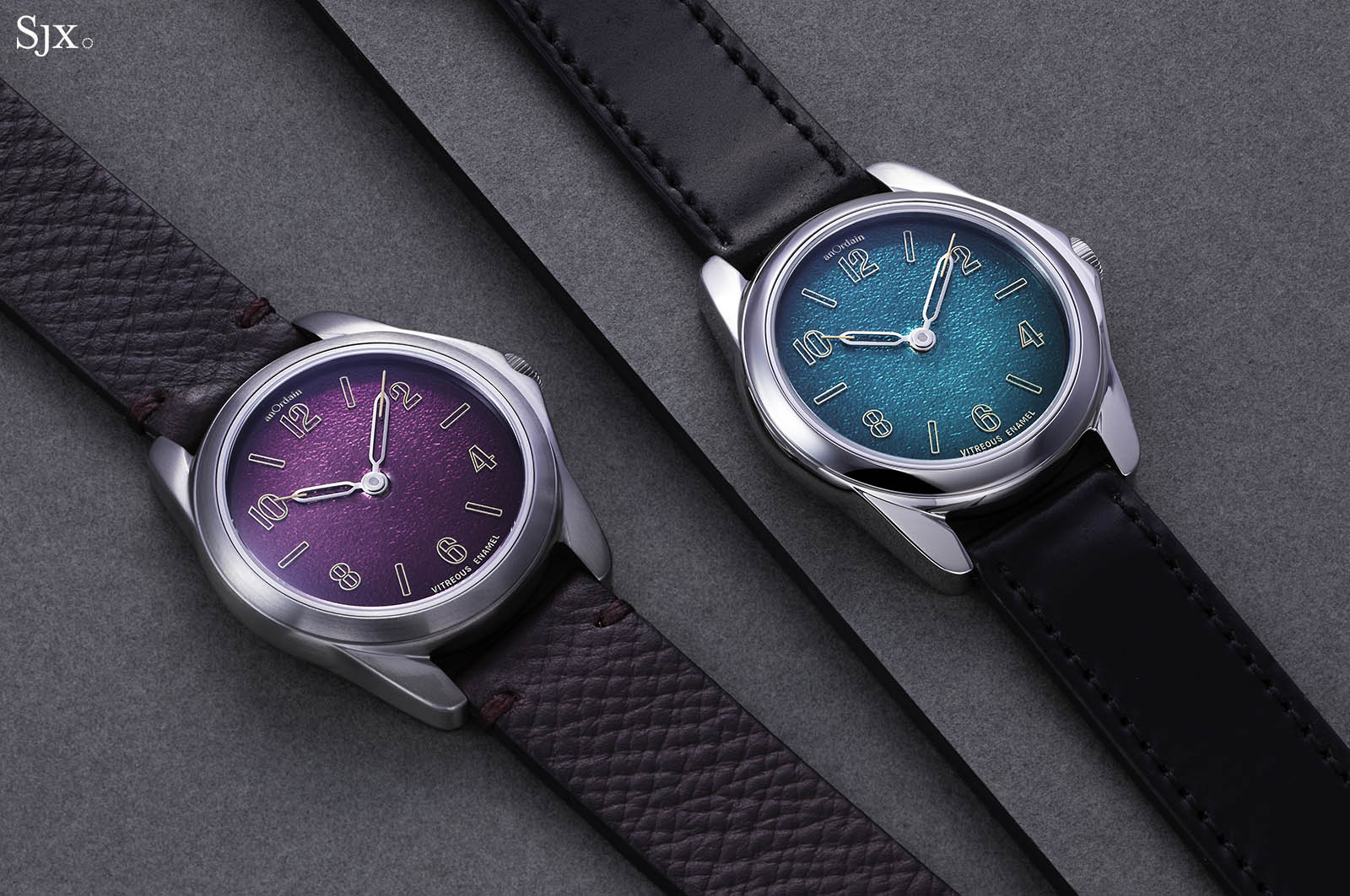 Founded in Scotland five years ago by industrial designer Lewis Heath, Anordain is one of the most unusual “microbrands” as it managed to master – straight out of the gate – one of watchmaking’s most prized crafts: vitreous enamel, often known as grand feu enamel in Swiss watchmaking. As a result, the brand manages to offer some of the most affordable watches with fired enamel dials, mostly priced under US$1500.

Following the success of the inaugural Model 1 last year, the brand has just unveiled the Model 2, a compact, hand-wound, two-hander with a modern, minimalist design. Most notably, two versions of the watch feature a fired, translucent enamel done over a hammered surface. 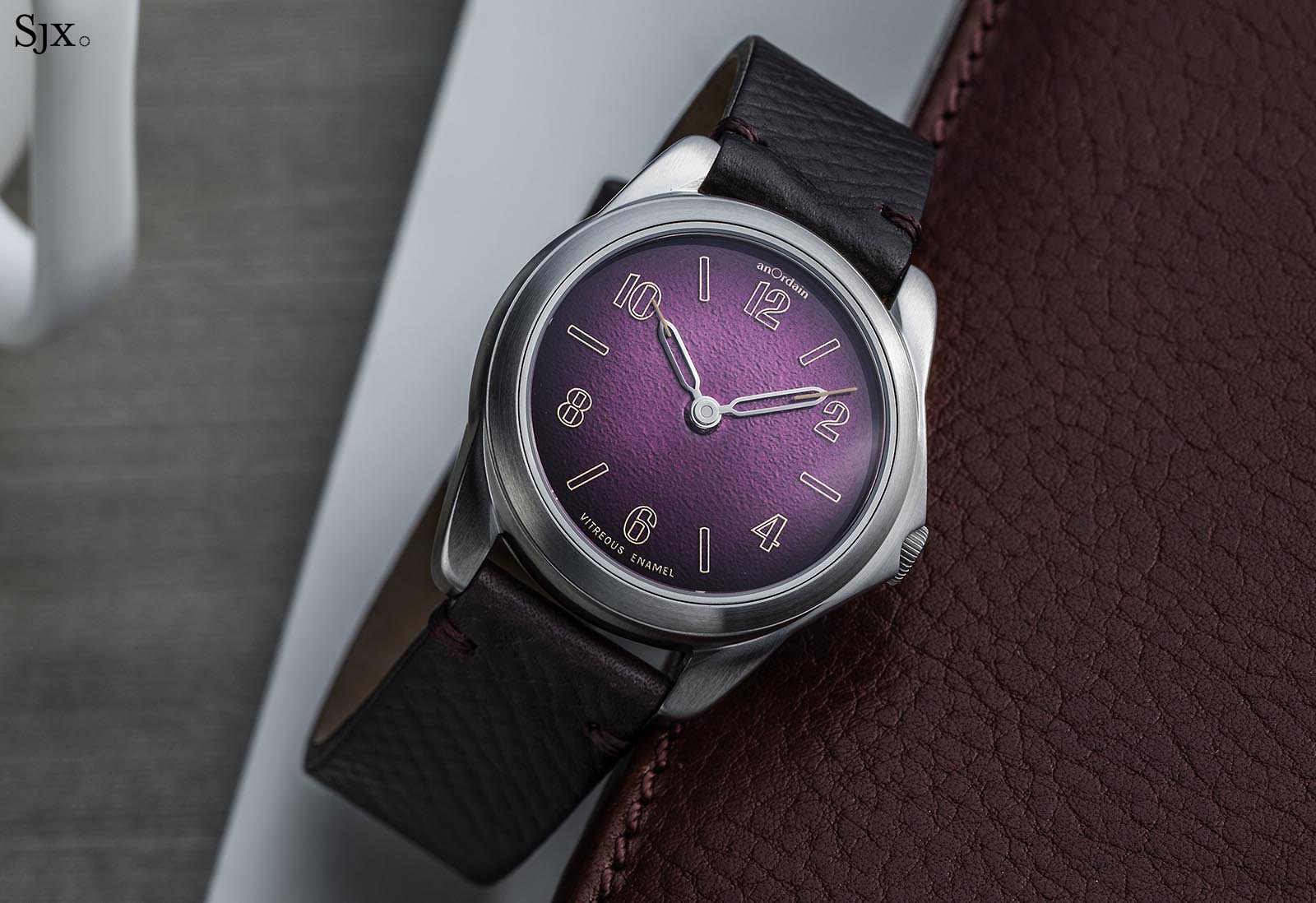 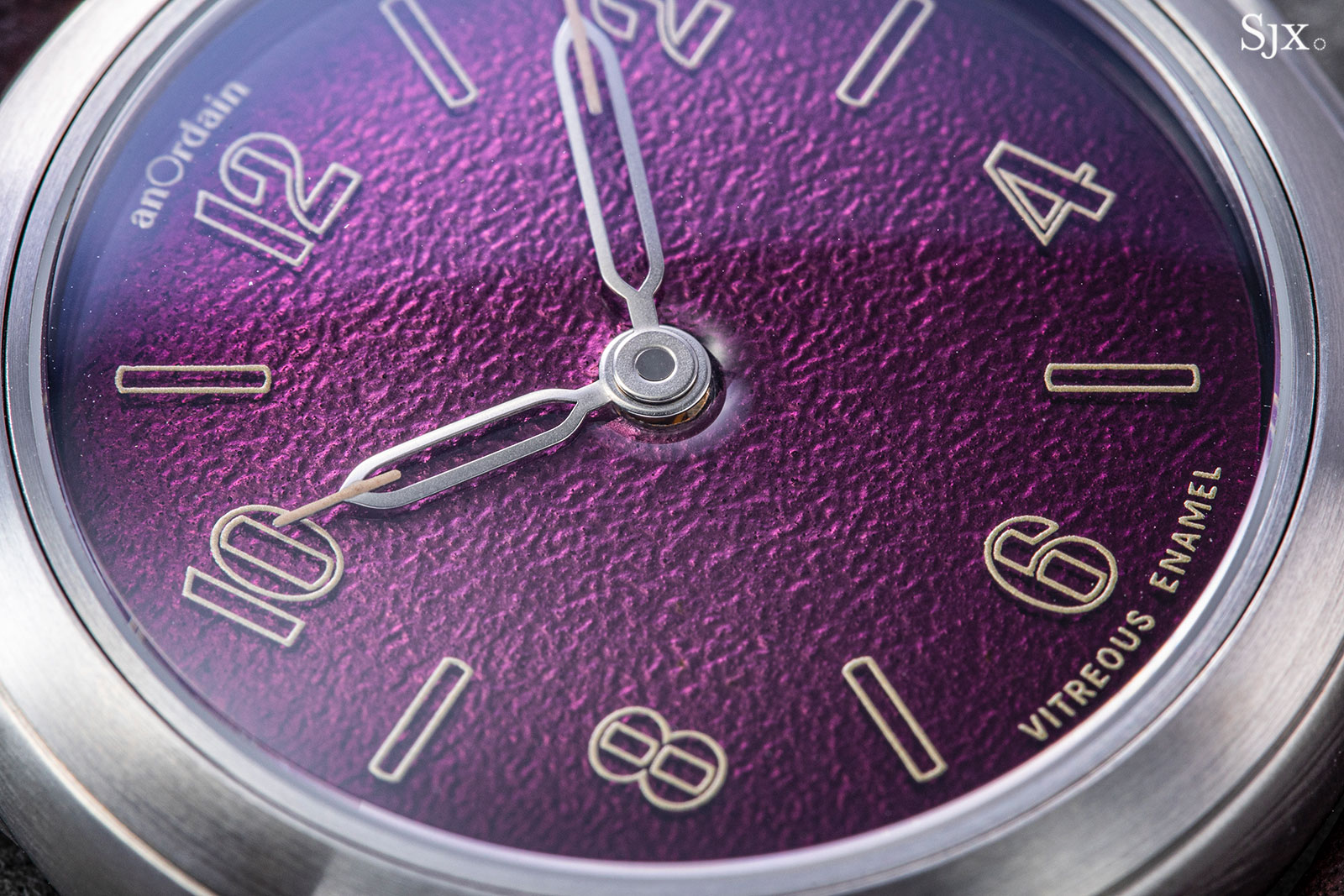 Like all Anordain’s standard enamel dials, the new hammered, enamel dial is done in-house. Located in Glasgow’s East End, Anordain’s workshop includes its own three-person team of enamellers that can produce eight to nine dials a week, usually in bright, unusual colours such as pink or a translucent bottle green.

Inspired by classic field watches – the no-nonsense wristwatches made for armies in the first half of the 20th century – the Model 2 was designed entirely in-house, from the case to the typography and hands.

And just like vintage field watches that are small by modern standards, the Model 2 measures a discreet 36mm in diameter and 11mm in height. Its balanced proportions are indeed reminiscent of field watches, albeit in a more refined and formal manner.

On the wrist, the dimensions create an unusual effect of feeling small yet looking big due to the thickness of the lugs and bezel. 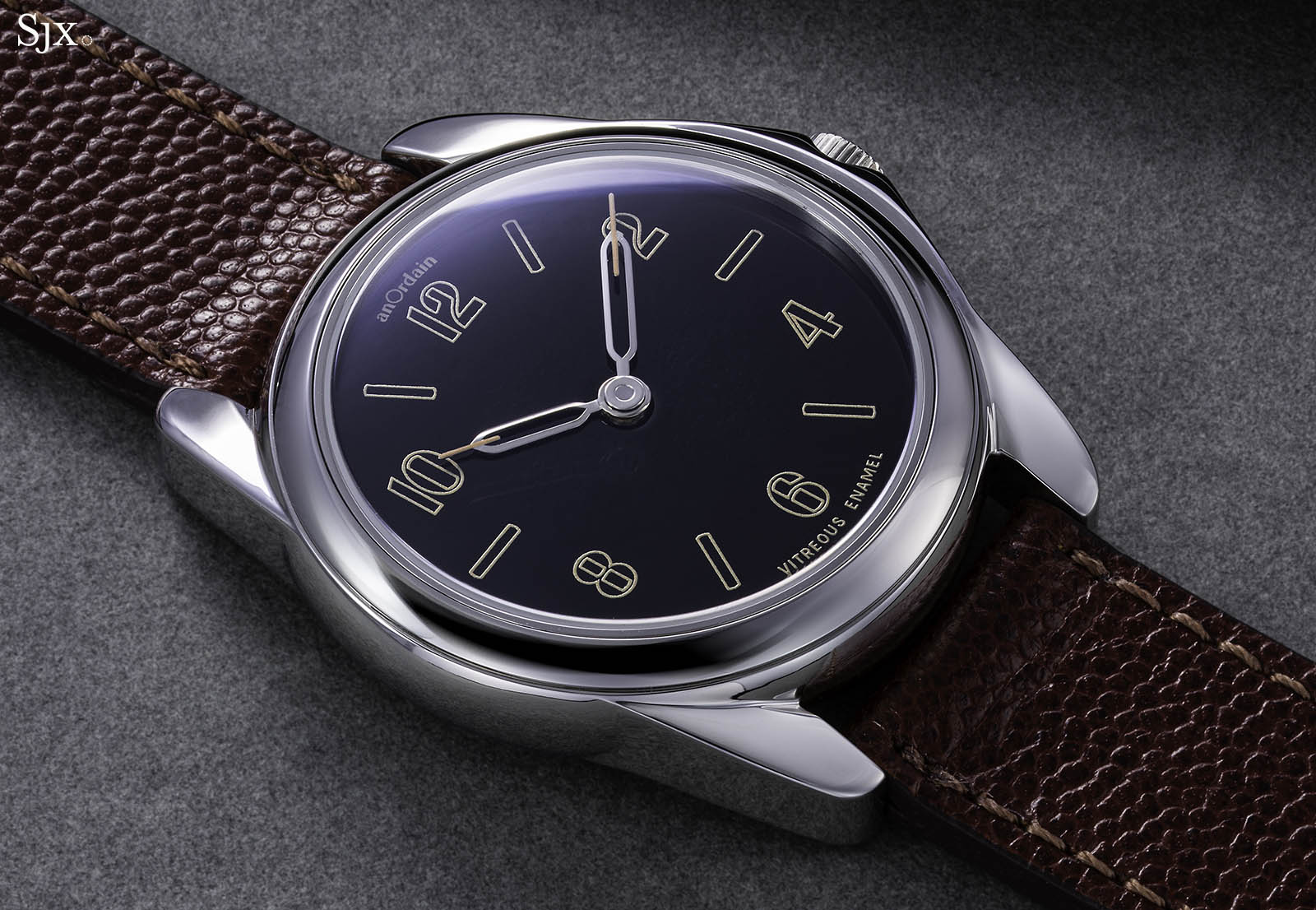 Depth rated to 50m, the steel case has a simple but beautiful profile with curved lugs and crown guards that slope to meet the crown. It features a wide, rounded bezel and is topped by a sapphire crystal with six layers of anti-reflective coating.

The case is available in two different case finishes, either entirely polished or satin finished. Either way, the single, uniform finish is appropriate for the clean, graphic style of the watch as it accentuates the soft contours of the case. 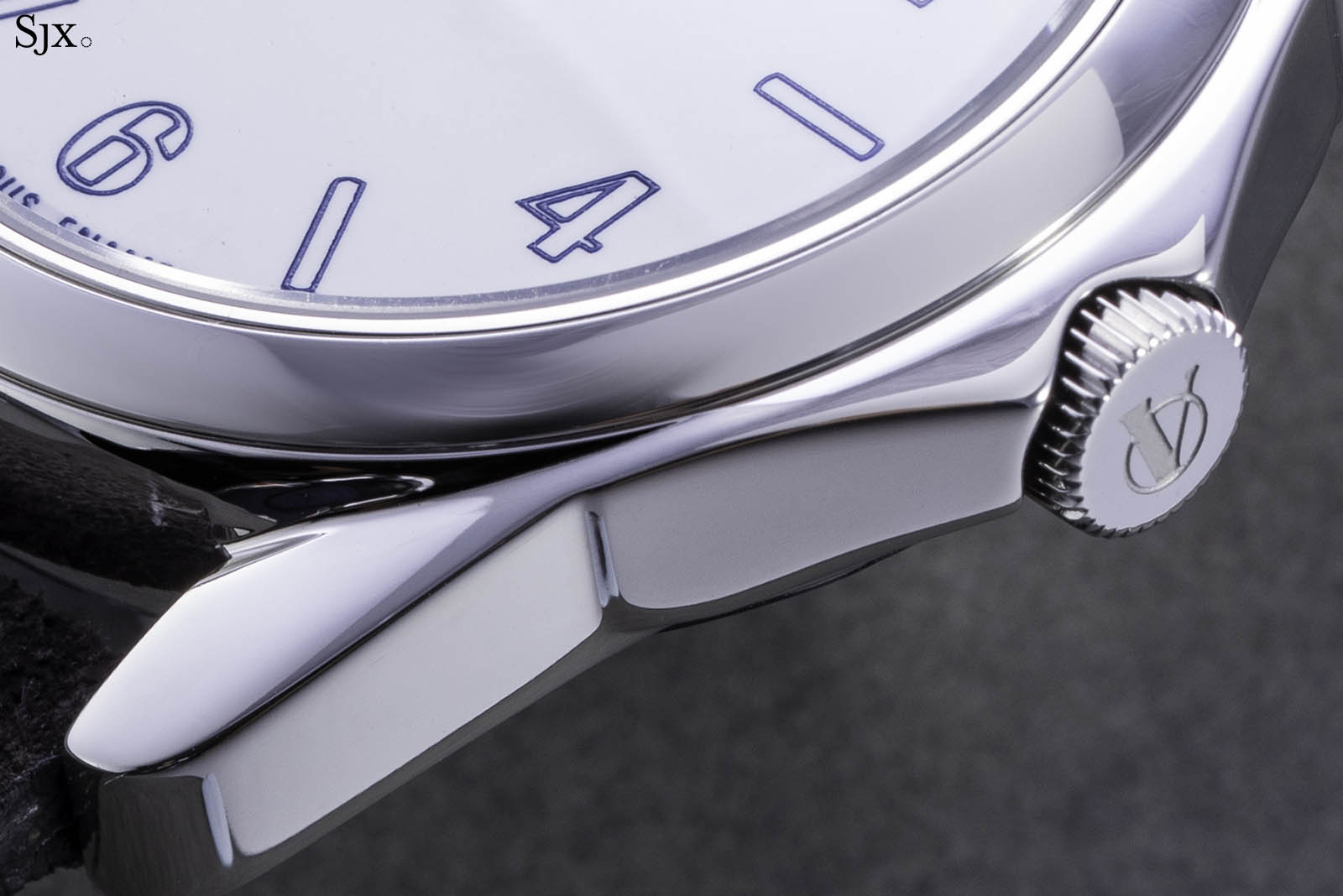 As with a majority of watch cases, the case is first stamped to create a rough shape and then further refined using CNC. 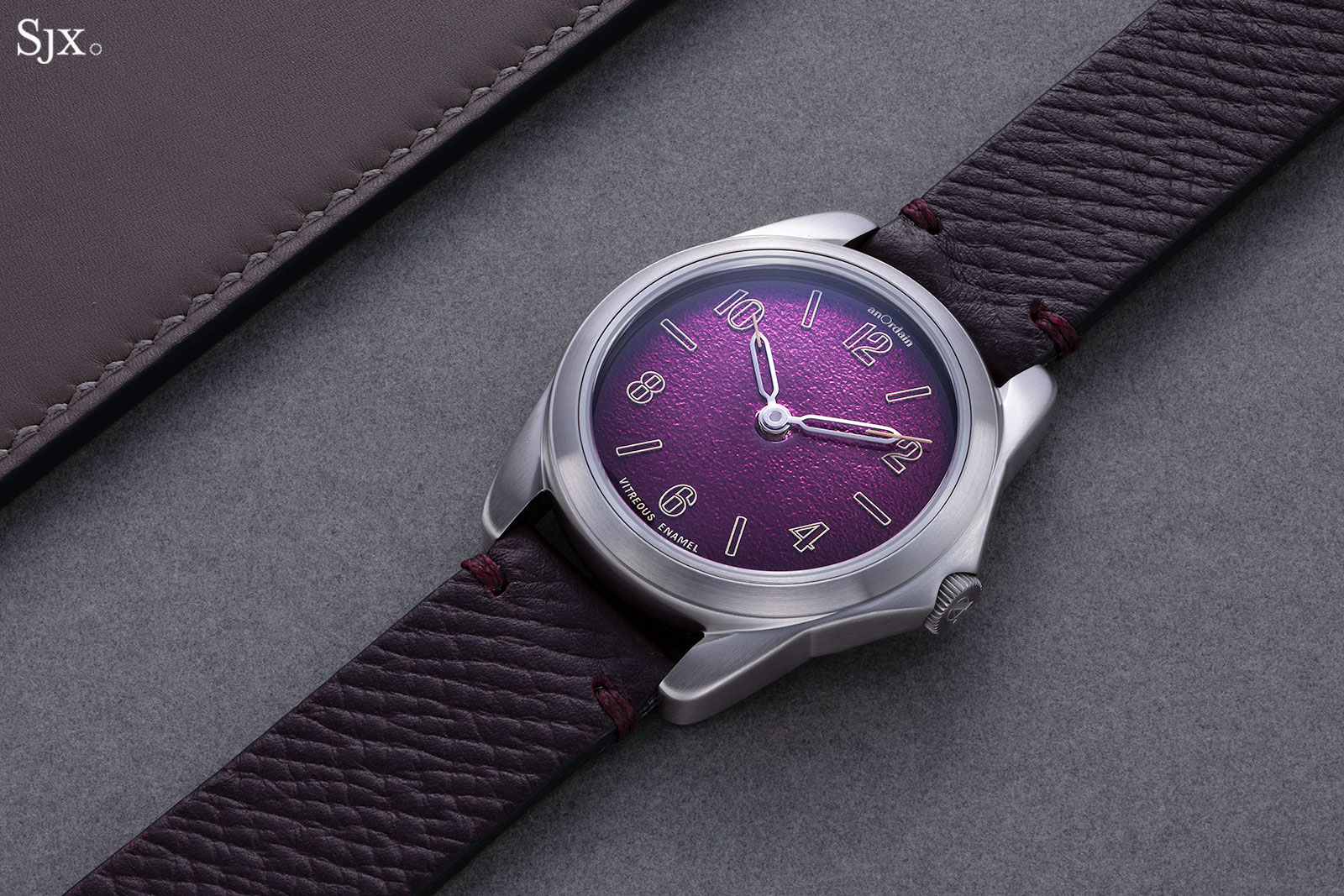 The Model 2 with a brushed case 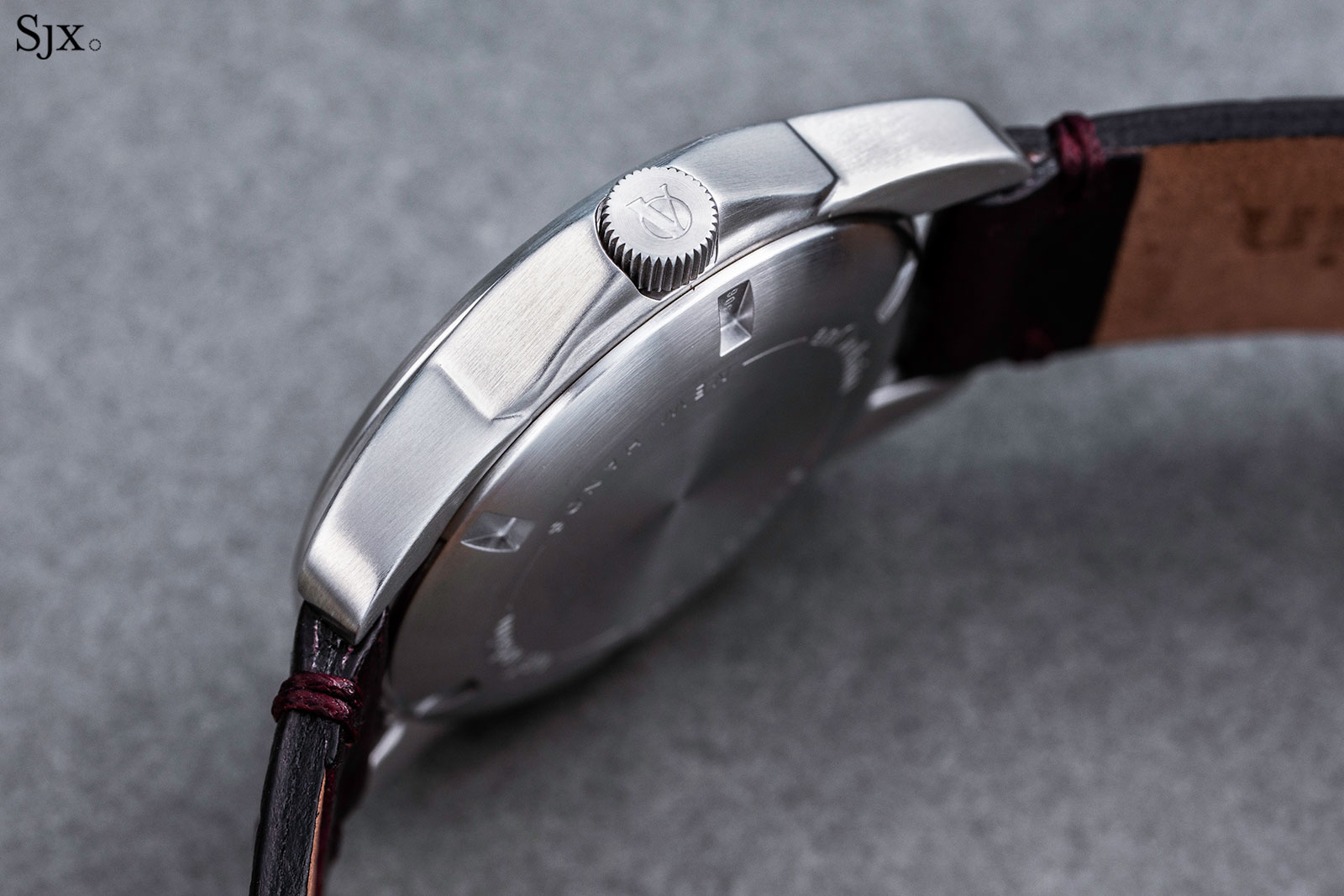 As with the Model 1, the fonts found on the Model 2 were designed by an in-house typographer who took inspiration from 1950s industrial equipment. 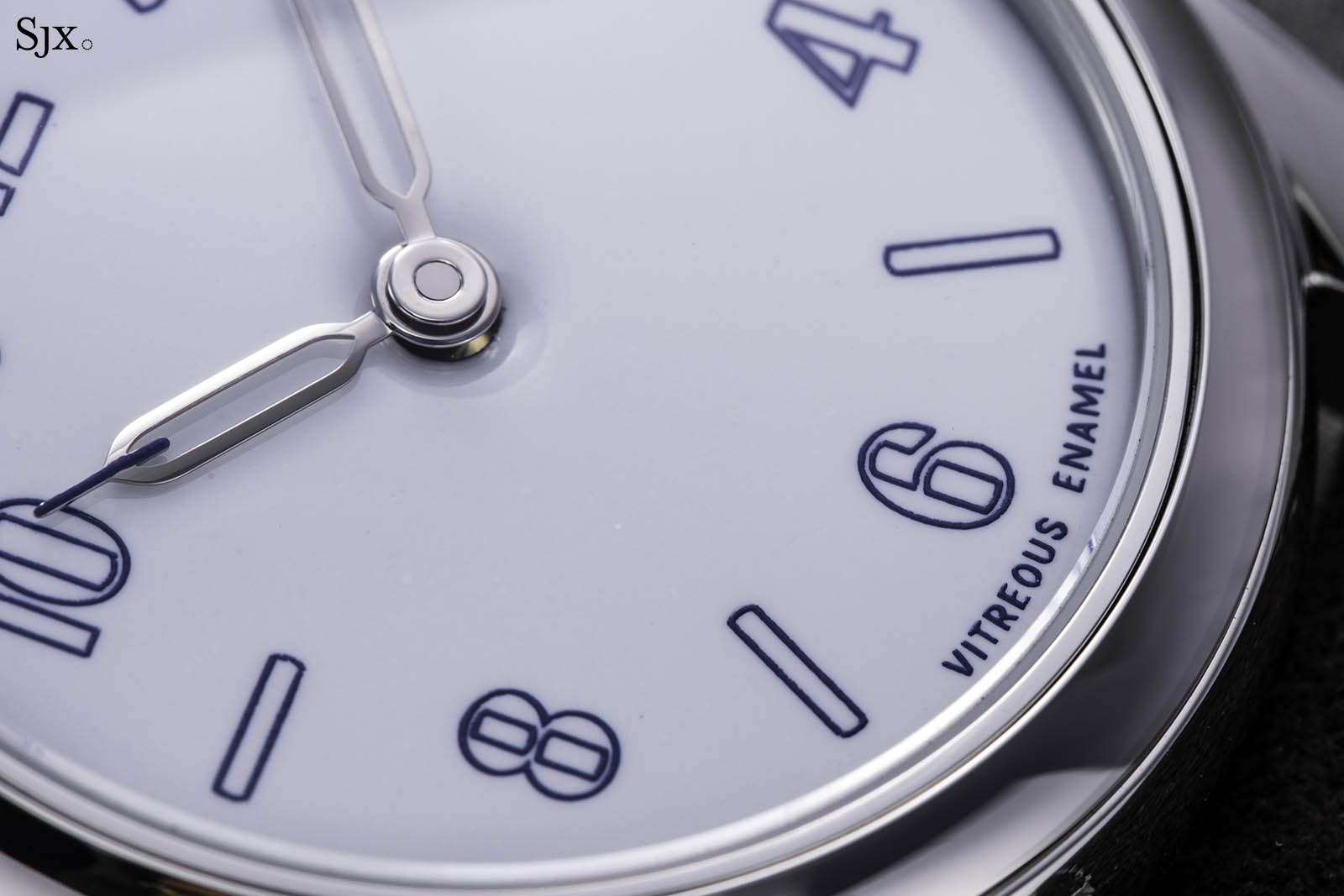 The clean, geometric typeface offers a pleasing contrast to the gentle curves of the case and are paired with suitably retro syringe hands specially designed to include Super-Luminova tips. The Model 2 is offered with grand feu enamel dials in six solid colours, as well as two dials, done in hammered, vividly coloured enamel – an entirely new technique for Anordain.

For the conventional enamel dials, a copper base is first painted with ground enamel powder and then fired in an oven at a temperature of over 800℃ to melt the powder and set it. 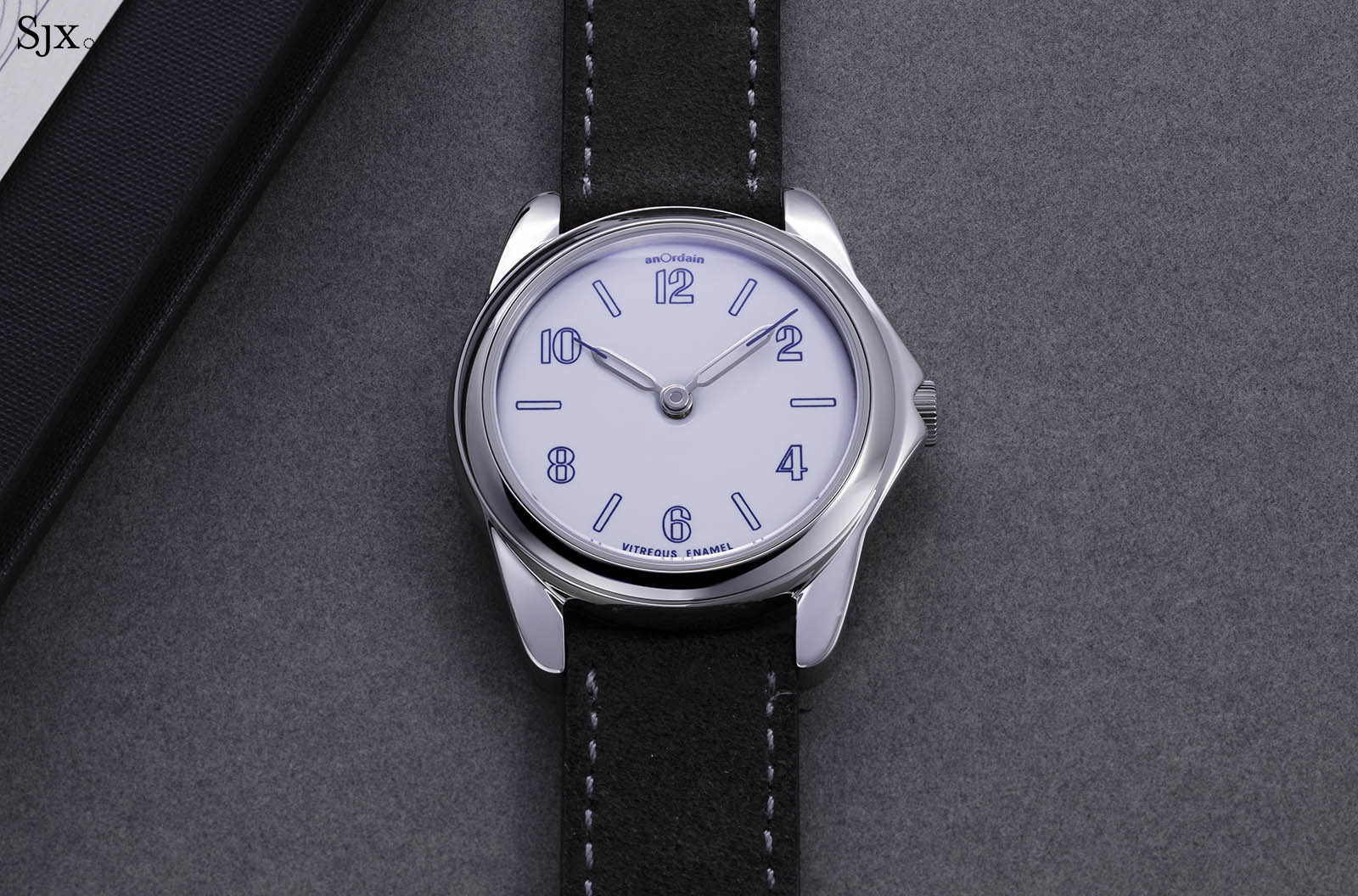 Then, instead of using a lapidary wheel to achieve a uniform surface, the enamel dials are sanded by hand with diamond paper to eliminate any excess enamel and give the surface a brilliant shine.

The process of adding enamel powder, firing and sanding are repeated up to eight times to achieve the desired depth of colour. The markings on the dial are then pad printed over the final layer of translucent, protective enamel.

And the special enamel

The textured dials, on the other hand, feature a subtle graduated (or fumè) finish that darken towards the edges.

This was accomplished with the use of a very clever and exacting technique. To start off, a silver base plate was used instead of copper, as heat causes copper to darken from oxidisation, which would then change the colour of the resulting dial since the enamel is translucent. The graduated effect was achieved by first pressing the silver dial base to give it a subtle domed shape, measuring just 0.38mm high, then hammering it by hand to create the textured surface.

The entire dial is then coated with a layer of translucent enamel, fired and sanded to ensure a flat surface. And then the numerals are printed on the topmost layer of enamel.

Because of the domed dial base, the enamel is thicker at the edges, and therefore darker, which is why the dial colour darkens towards its edge. 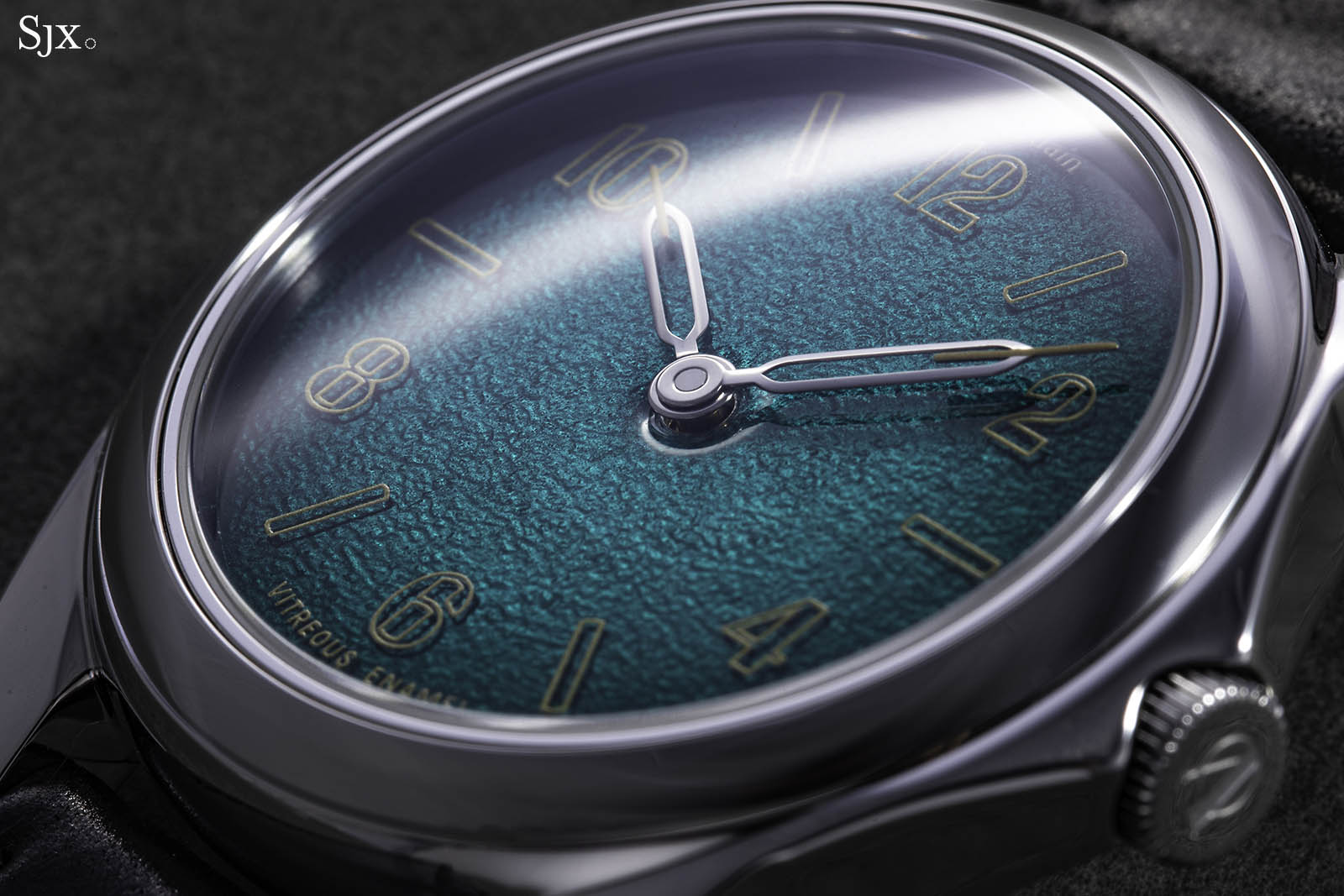 The result is extremely unique and striking, with the dials being grained yet glossy, metallic yet rich. And the numerals appear to be floating above the dial, an effect enhanced by the airy, hollow typeface. 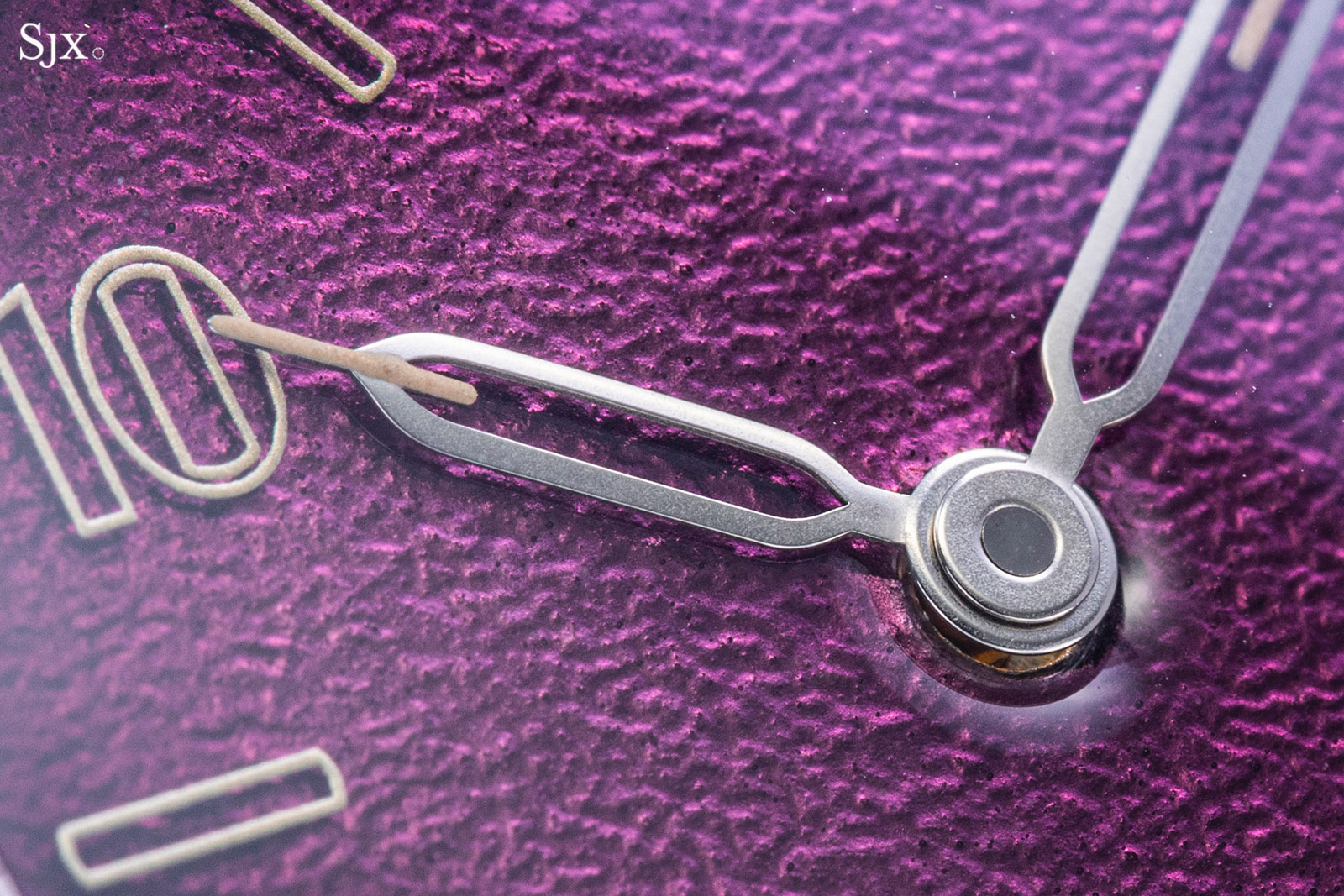 While the Model 1 had a transparent case back and an automatic movement, the Model 2, like early field watches, is equipped with a hand-wound movement that is hidden behind a solid case back. It utilises the Sellita SW 210-1, a clone of the ETA 2801-2 that’s low-cost and robust hand-wound movement with a 42-hour power reserve. Ironically the ETA 2801 is also used in some modern day remakes of field watches, including those by Hamilton.

Ultimately, the Anordain Model 2 offers incredible value for money; ticking a lot of boxes for the price segment it fulfills.

While the closest competitors include the Seiko Presage in its many iterations, the Model 2’s value proposition lies not only in its beautiful enamel dial, but also the strength and uniqueness of its design, from the case down to the hands and typography.

The overall effect of combining a somewhat sporty and modern design with a grand feu enamel dial is especially appealing. And the hammered enamelled dials are perhaps some of the most beautiful and unusual on the market, especially with the smoked finish, which could perhaps be better showcased on a bigger watch.

Availability: Direct from anOrdain
Price: £1500 for the hammered, enamel dial), and £950 for the standard dial (Prices include 20% UK VAT)