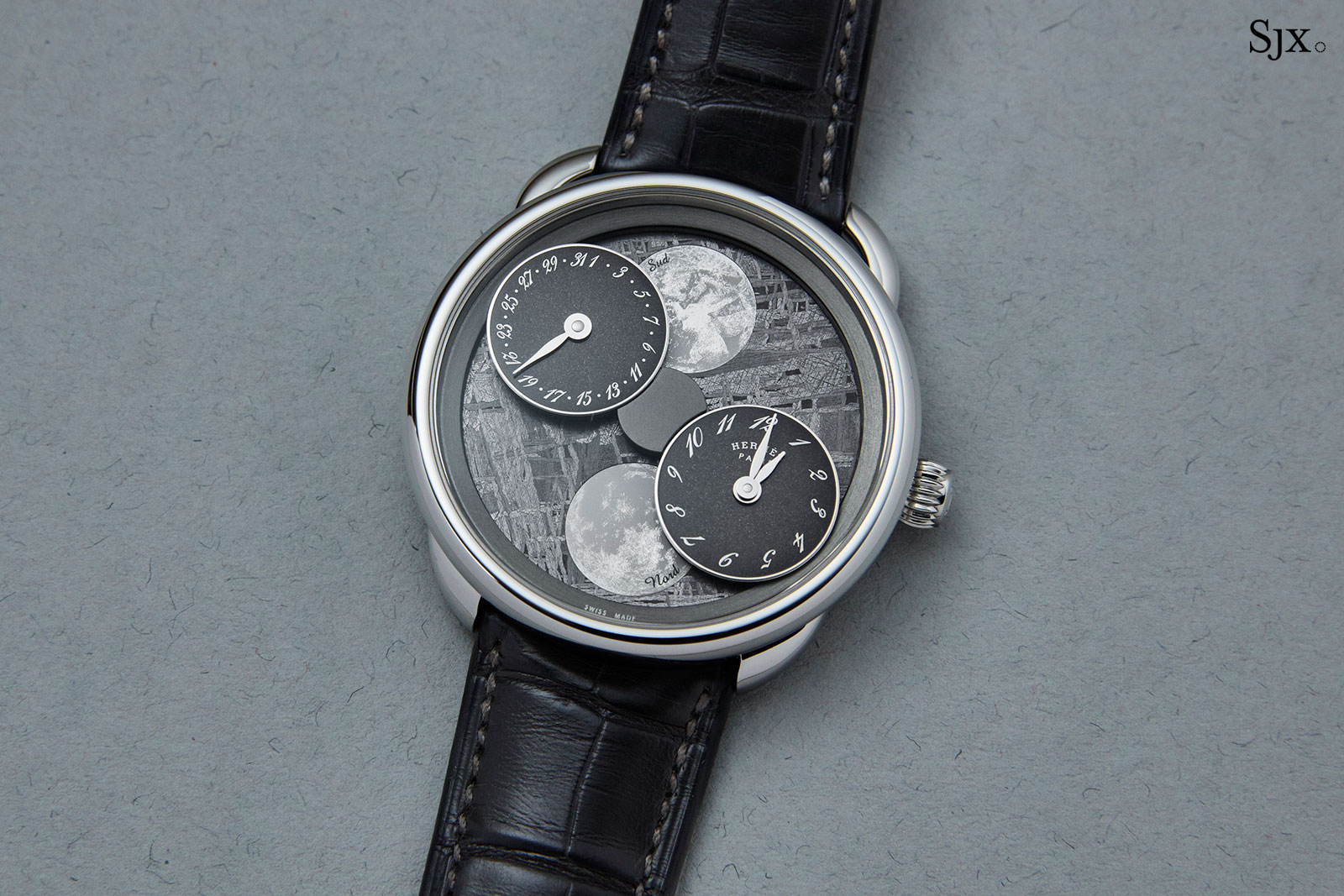 Hermès, as a brand, usually has an elegant, light and sometimes whimsical house style that makes it unique amongst luxury houses. The Arceau L’Heure De La Lune unveiled at SIHH at the start of the year exemplifies the house style, although the case is thicker than ideal.

Functionally, the Arceau L’Heure De La Lune is a straightforward watch – it shows the time, date and phases of the Moon in both the Southern and Northern hemispheres. But the execution of the time and date is striking and clever.

The two are essentially orbital displays, as each is on a sub-dial mounted on a rotating, central carousel. The carousel take 59 days to make one complete revolution around the dial. But each sub-dial also rotates on itself as the carousel turns. As a result, each sub-dial is always the right way up regardless of its position.

Both sub-dials also double up as the moon phase indicator, with position of each sub-dial indicating the age of the Moon in each hemisphere. And in a bit of whimsy, the hemispheres have been inverted, with the Southern on top and Northern below. 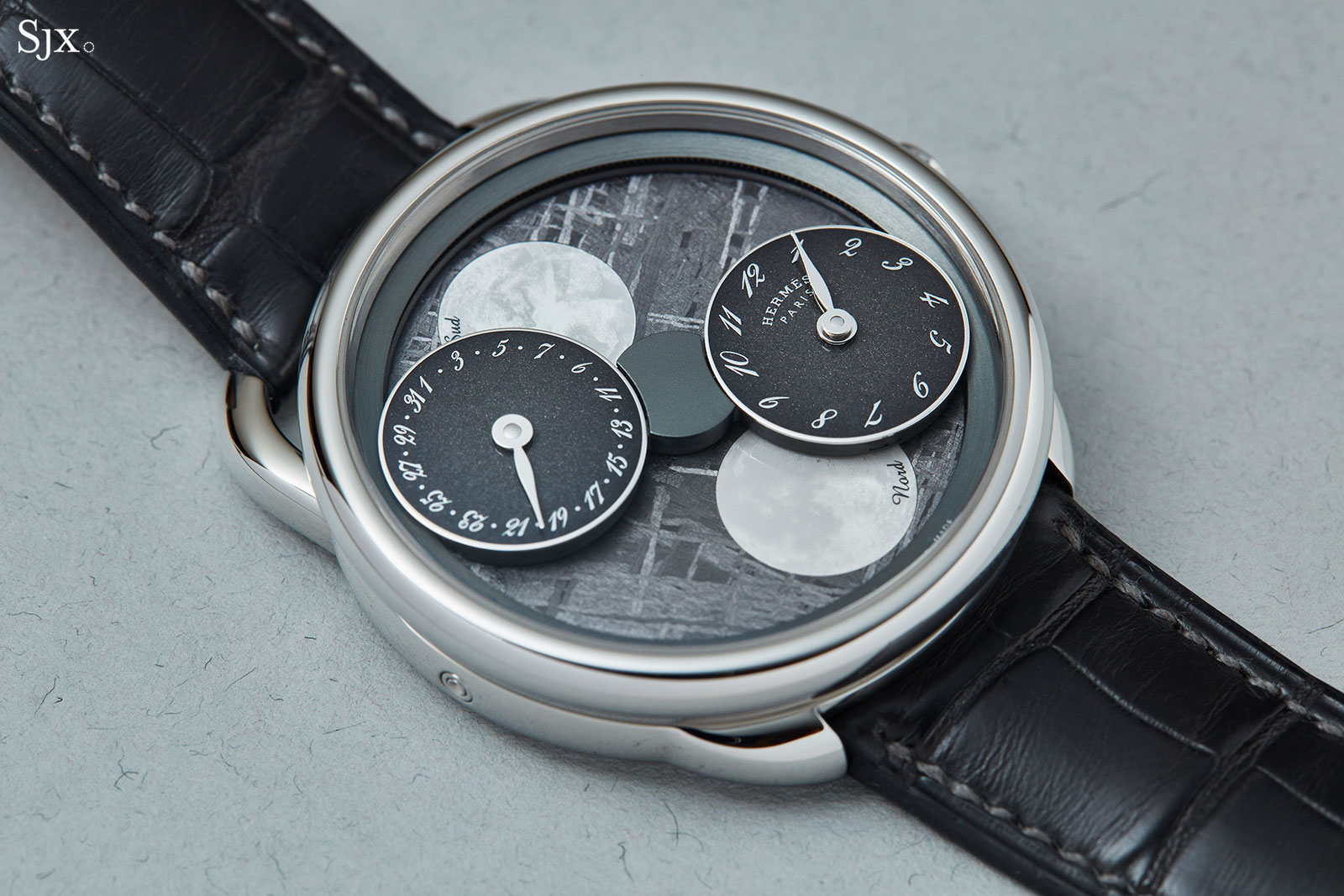 The Arceau L’Heure De La Lune with a meteorite dial The inventive display was built by Chronode, the complications specialist founded by Jean-Francois Mojon, which has a diverse body of work that includes Urban Jurgensen’s P4 movement, the MB&F LM2, and the constant force tourbillon of IWC. Chronode conceived and builds the display module that is complex enough it alone consists of 117 parts, compared to 193 components in the H1837 movement that serves as the base. The H1837 movement is produced by Manufacture Vaucher and decorated in Hermes’ typical style with a stamped pattern on the bridges and rotor. Beyond the repeating “H”, the decoration is clean and neat, though obviously done by machine, which is par for the course in this price segment. The H1837 from Vaucher, the movement maker a quarter owned by Hermes and a sister company of Parmigiani But the downside of the module’s complexity and ingenuity is its size. The module is 38mm in diameter and 4.2mm high, making it bigger and thicker than the base movement (which is 26mm and 3.7mm respectively).

As a result, the watch is large; large enough that is feels chunky, despite looking elegant.

The case is 43mm in diameter so it looks large. And it is just under 12mm high, which puts it in the same ballpark as the current Rolex Daytona, which has a case thickness of 12.2mm. And the thickness of the watch is accentuated by the sloping flange around the dial, made necessary by the orbital carousel.

Unavoidably, the watch feels big on the wrist. It wears reasonably well for a watch this size, because the lugs are quite short. 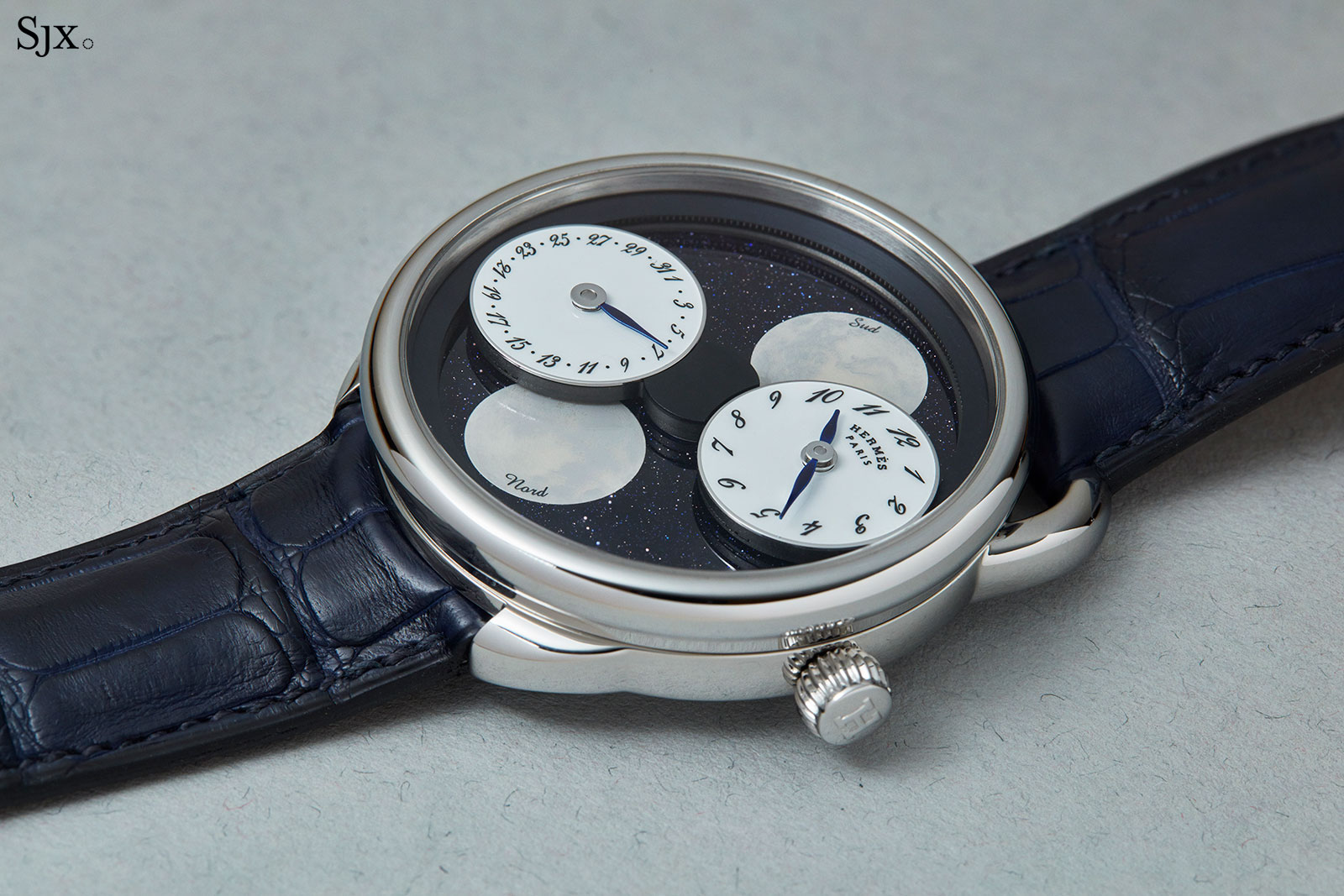 With an aventurine dial

Despite the size, the watch still manages a refined feel, thanks to all its wonderful detailing.

The distinctive Arceau designed in 1978 by longtime Hermes designer Henri d’Origny, but still feels current. It’s asymmetrical, but in this particular variant, not overtly so (on the smaller versions the asymmetry is more pronounced). The upper lugs are gently larger than the lower ones, so the visual effect is subtle. Two dial types are available, both equally appealing though slightly different in feel. They share the same overall design, with Breguet-style numerals and leaf-shaped hands.

The first has a meteorite base and is finished in shades of grey – it has a more modern, masculine look. 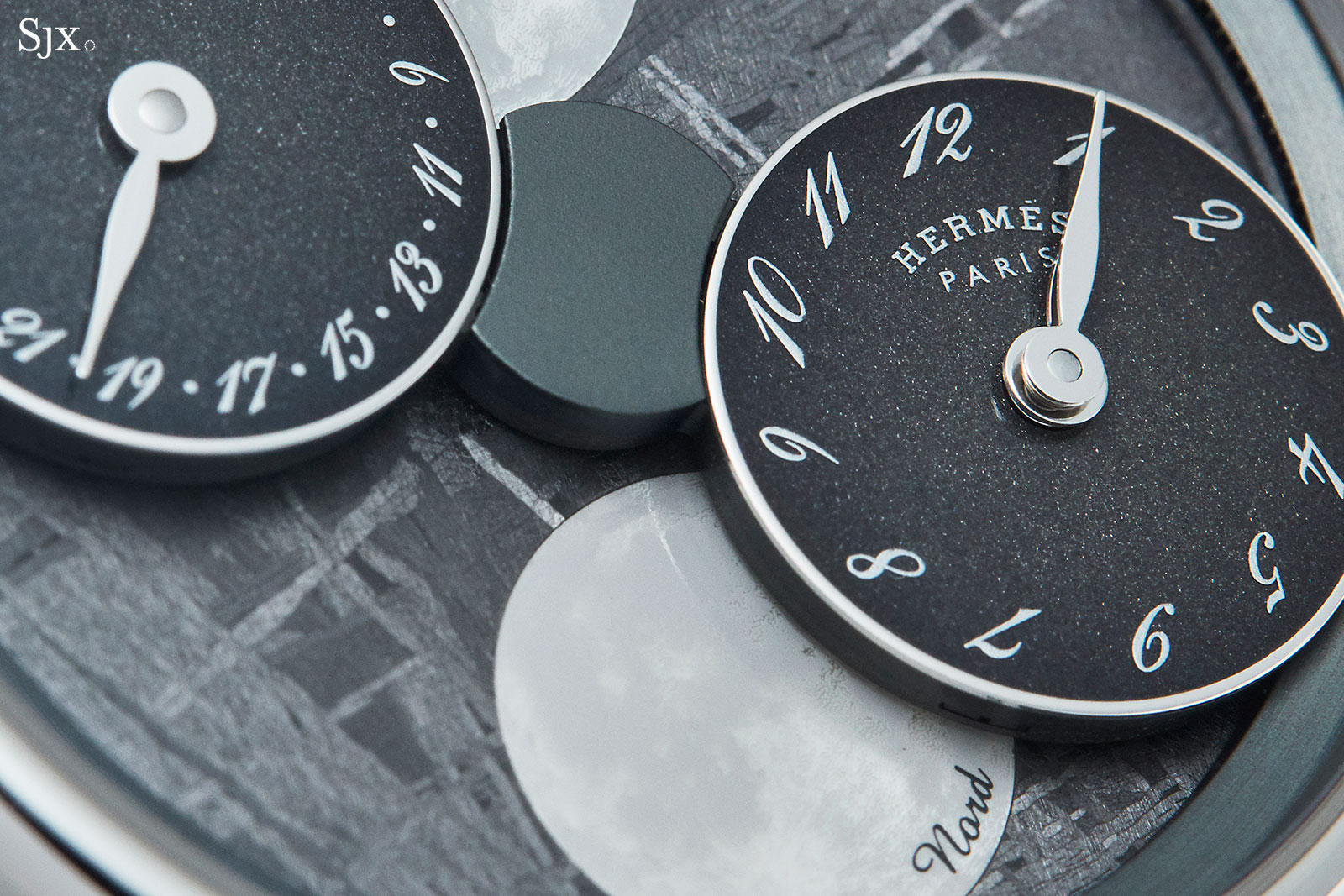 And the second has a sparkly aventurine glass base. It works well with the lunar theme, and feels a bit more whimsical than its meteorite counterpart. The only shortcoming on this dial is the fact that the hands are painted blue, rather than heated blued.

Both dials have moons made of white mother of pearl, but printed with a lunar surface design that incorporates a discreet twist. The Southern Hemisphere moon incorporates the Pleine Lune motif of a Pegasus created by Paris-based artist and designer Dimitri Rybaltchenko, but it is only visible at certain angles and up close. At arm’s length the winged horse simply blends into the Moon’s surface. 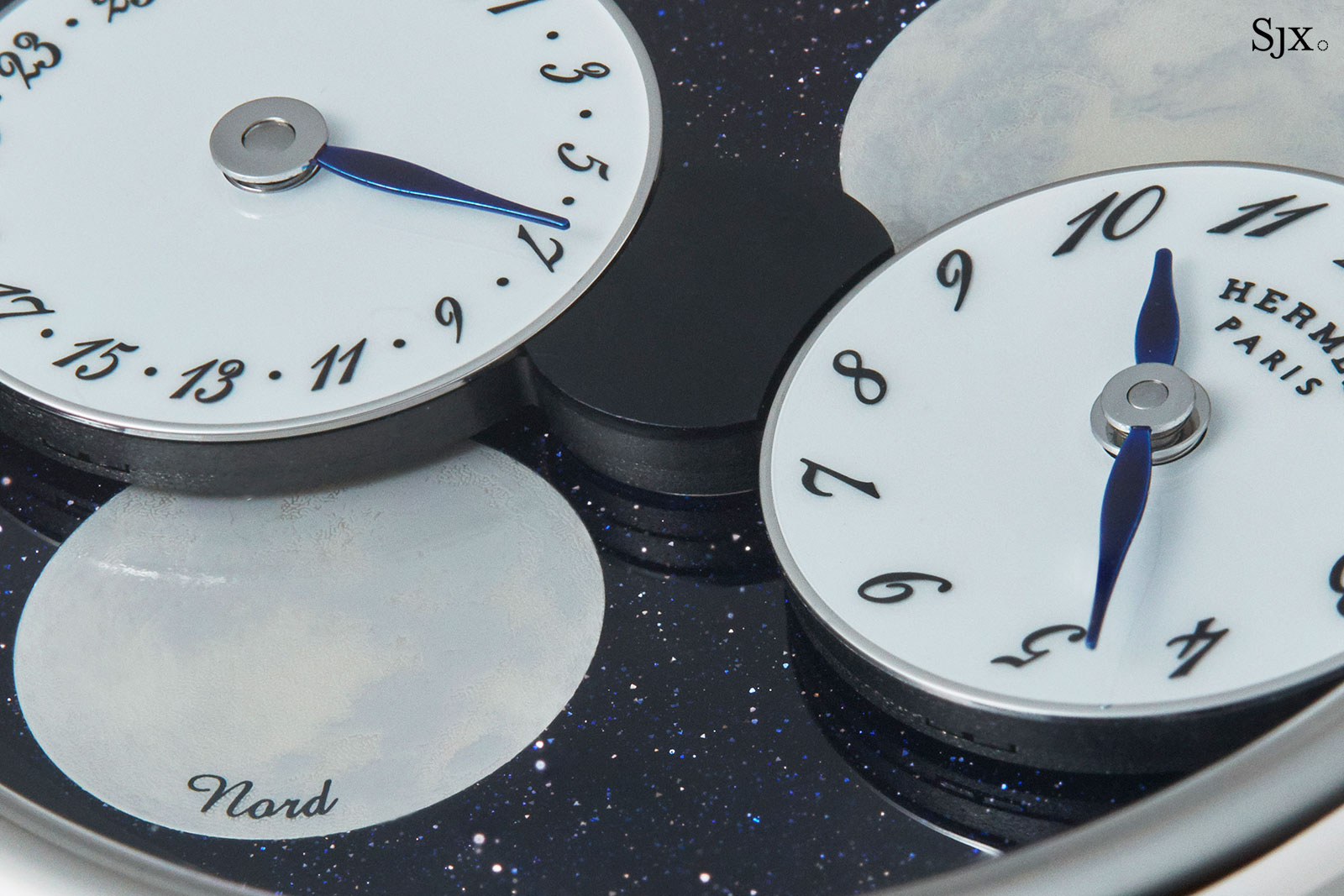 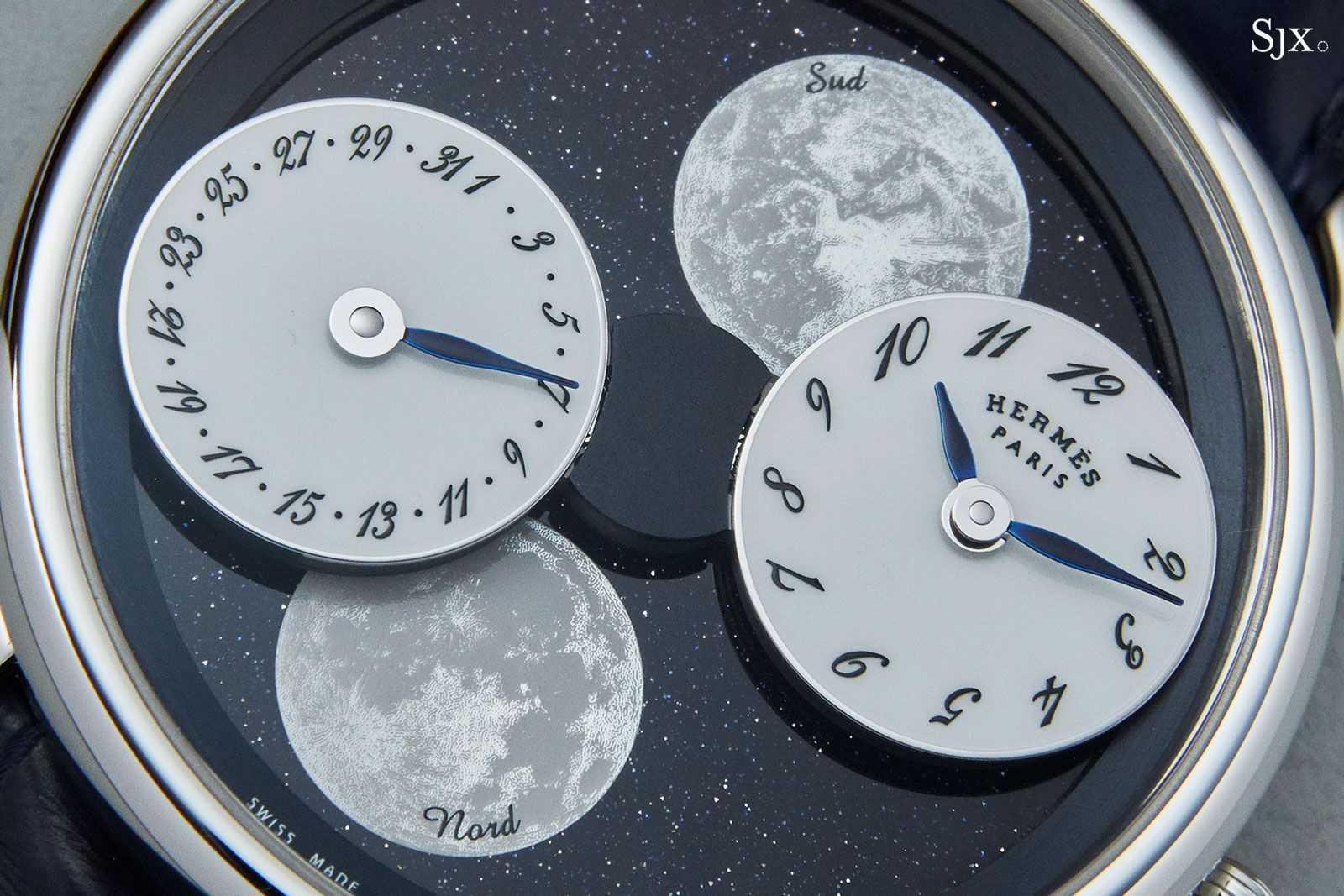 The subtle Pegasus visible on the upper moon

The Arceau L’Heure De La Lune is a beautifully designed watch, beautiful enough that its size – which in fairness is a technical necessity – is not a dealbreaker. It combines both the elegant and distinctive house style of Hermes, something that no watchmaker can reproduce, with a properly creative and complicated time display mechanism. Hermes has done very well with this watch.

Availability: Limited to 100 pieces each, already available at Hermes boutiques
Price: US$25,500 In the tradition of its extravagant exhibitions, Cartier has recently opened Cartier, Crystallisation Of Time in Tokyo’s National Art Centre. Made up of some 300 items, ranging from jewels to clocks to objet d’art, the exhibition is the third Cartier exhibition in Japan since the 1990s (and the 34th globally).

Notably, half the exhibits are on loan from private collections, with the rest being from the Cartier Collection, the jeweller’s own trove of over 3000 items spanning 1860 to the modern day. More unusually, this is the first exhibition that includes contemporary Cartier creations from the 1970s and later, in contrast to past events that only included historical objects. 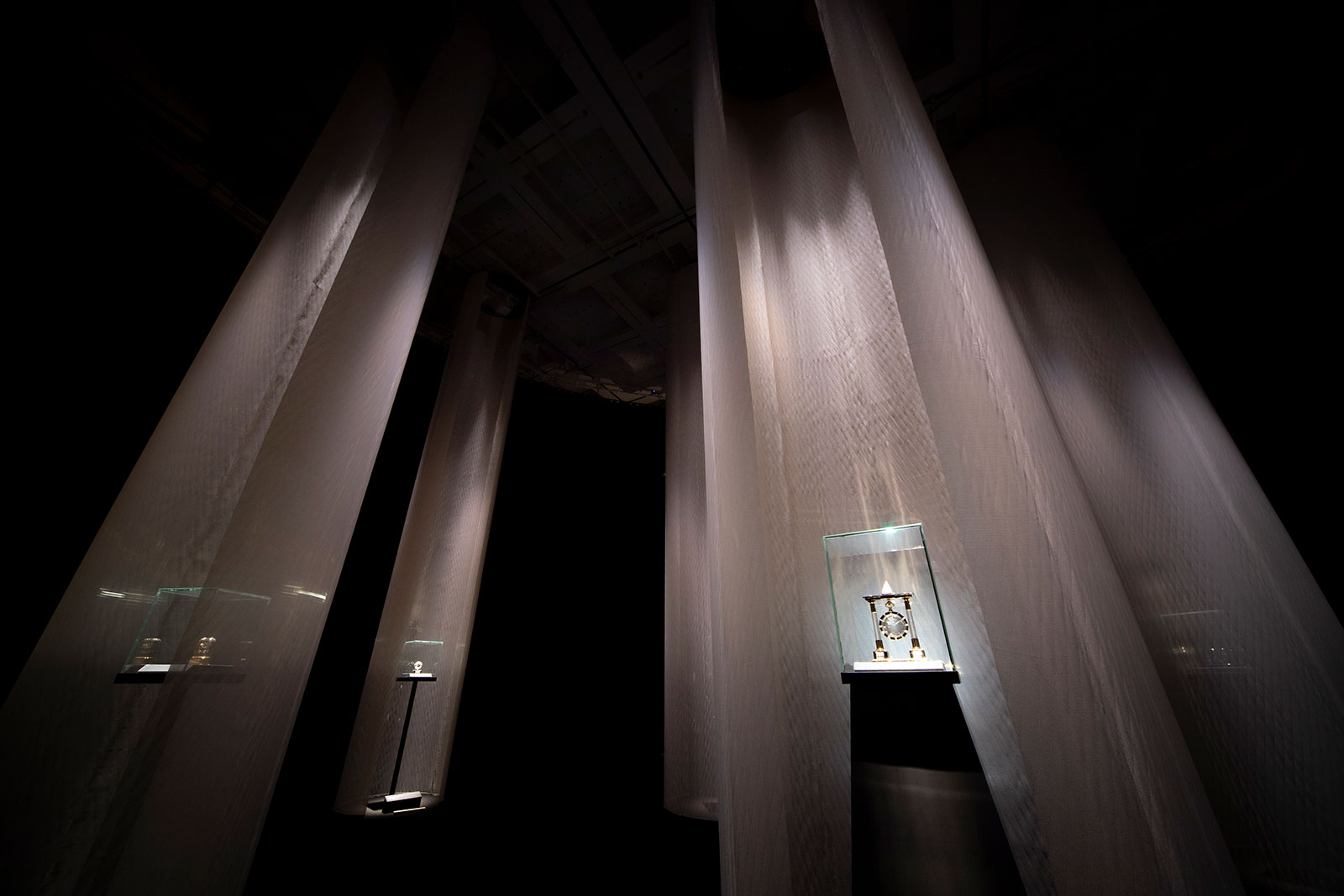 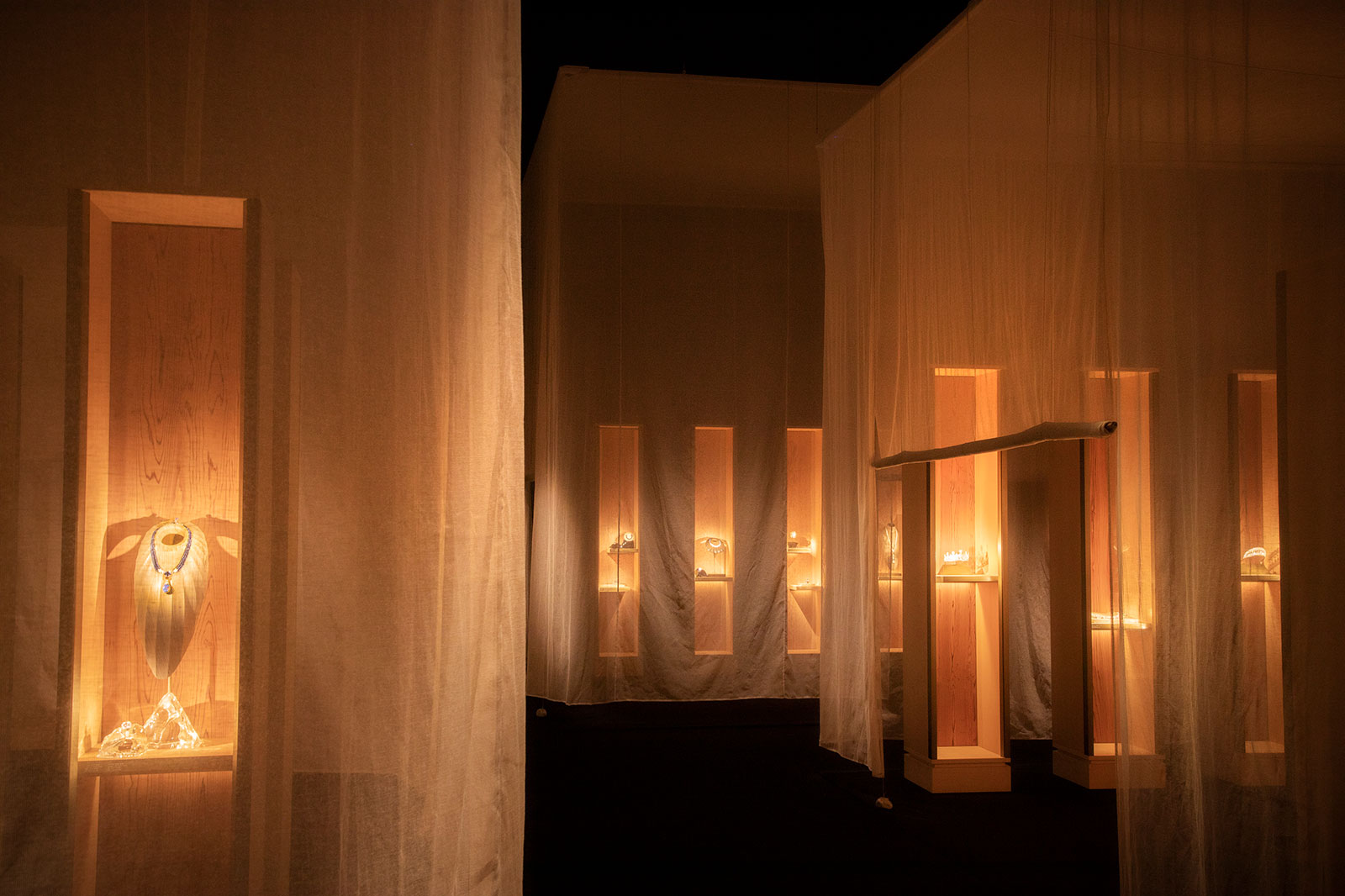 The exhibition explores the jeweller’s rich history by juxtaposing vintage jewels, timepieces and objects against their modern equivalents or relations. So a lavish portico mystery clock made of gold, rock crystal and onyx from 1923 sits beside a 2016 mysterious tourbillon pocket watch hanging in its rock crystal and jade stand. 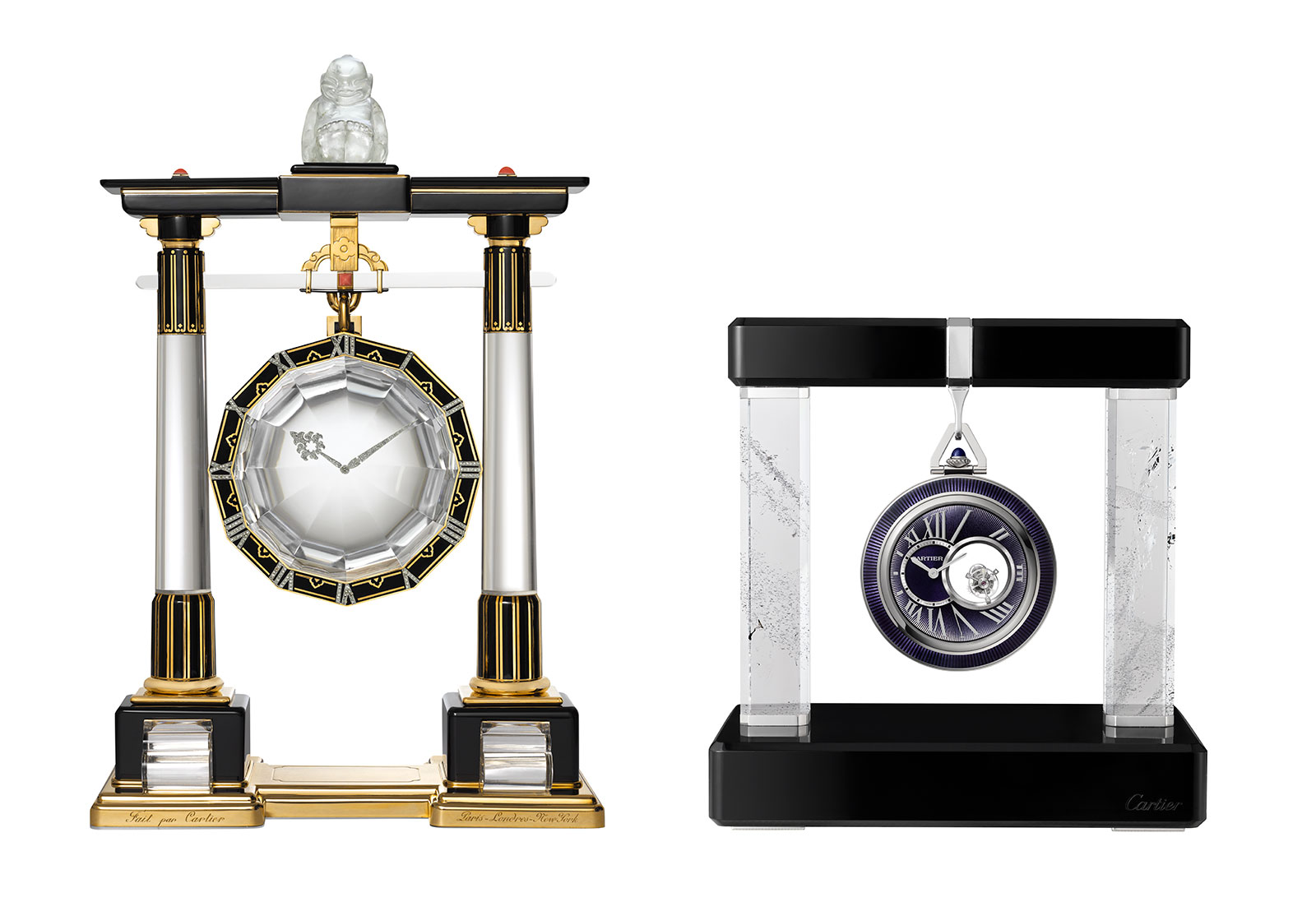 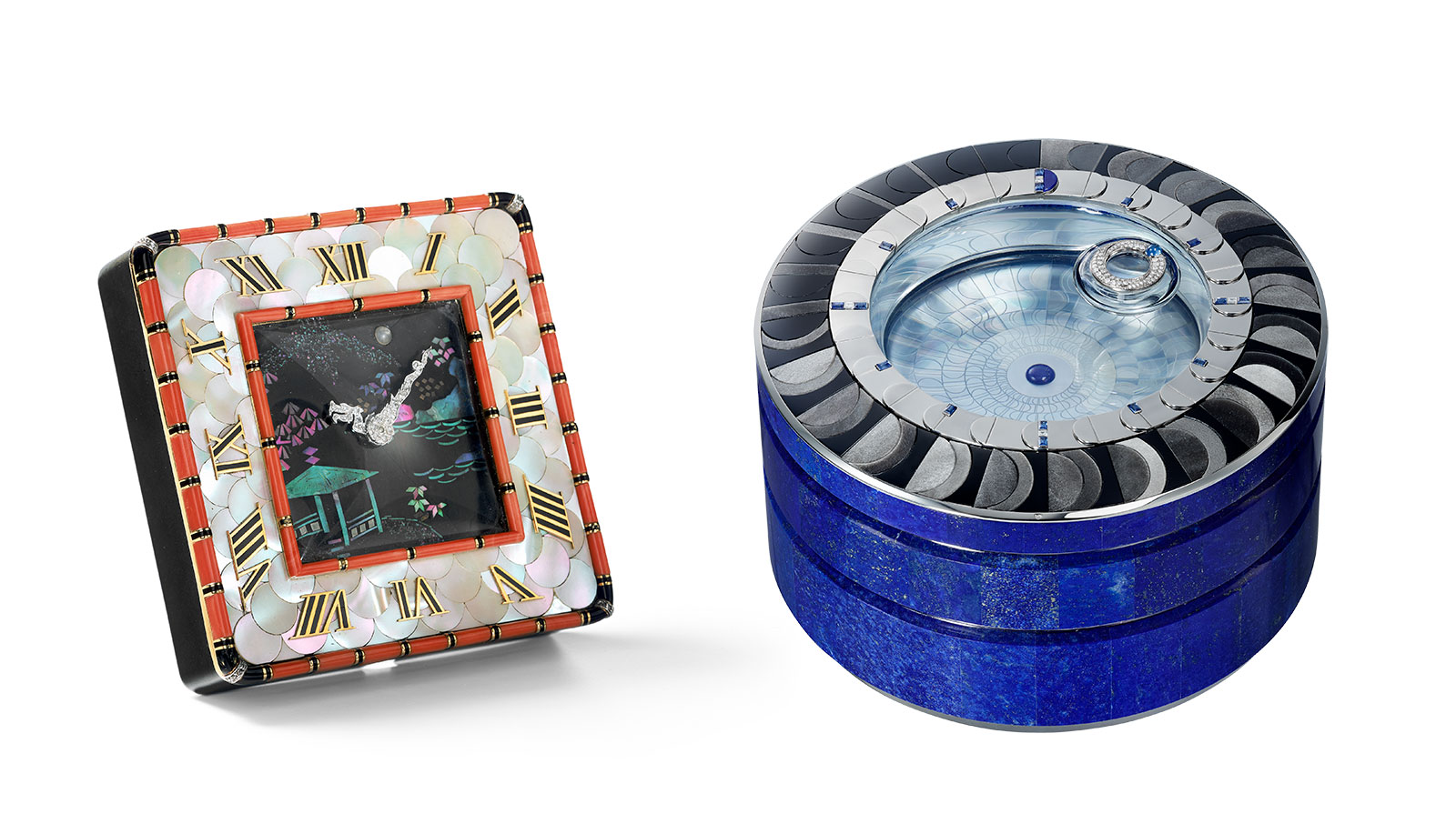 Desk clock, circa 1929, made of ebonite, mother-of-pearl, and coral (left); and magnetic clock from 2016, in white gold, lapis lazuli, and mother-of-pearl 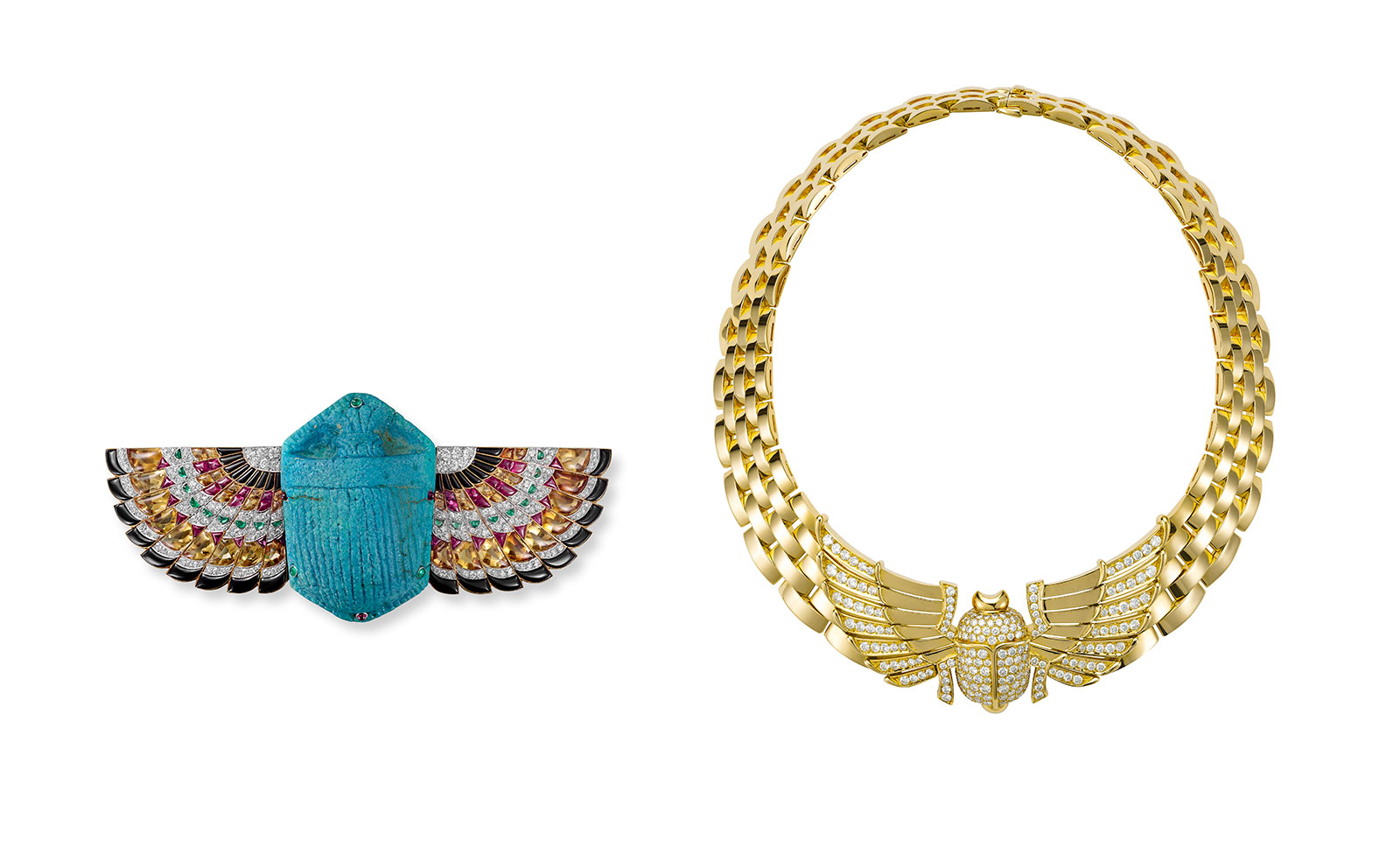