There’s a lot more than meets the eye in the hairspring pictured above.

At a glance it looks like just another ordinary hairspring, which makes up half of the regulating organ that keeps time in a mechanical watch, but this hairspring is the result of multiple innovations over the past decade – and it’s made in Hong Kong.

To start with, the hairspring is made of silicon. While the material in itself isn’t new, keen observers will notice the shape of the hairspring; it is silicon but features an overcoil.

Master Dynamic, a Hong Kong-based engineering outfit, developed the hairspring and received a patent for it in 2017 – United States patent US9658598B2. The patent covers the design of the hairspring, as well as the specific type of silicon used, which differs from the type used for Swiss silicon hairsprings.

Founded in 2010, the company employs over 130 engineers, whose work encompasses diverse fields, ranging from nano-engraving on diamonds to material analysis, and also production of micro-components in metal and silicon.

It was the Swiss, however, who pioneered the use of silicon in watch movements. Ulysse Nardin introduced the first wristwatch with silicon components in 2001, when the Freak made its debut. Thanks to Ulysse Nardin’s collaboration with Centre Suisse d’Electronique et Microtechnique (CSEM), the Swiss research institute responsible for developing silicon movement parts, the Freak was equipped with both its hairspring and escape wheels in silicon. 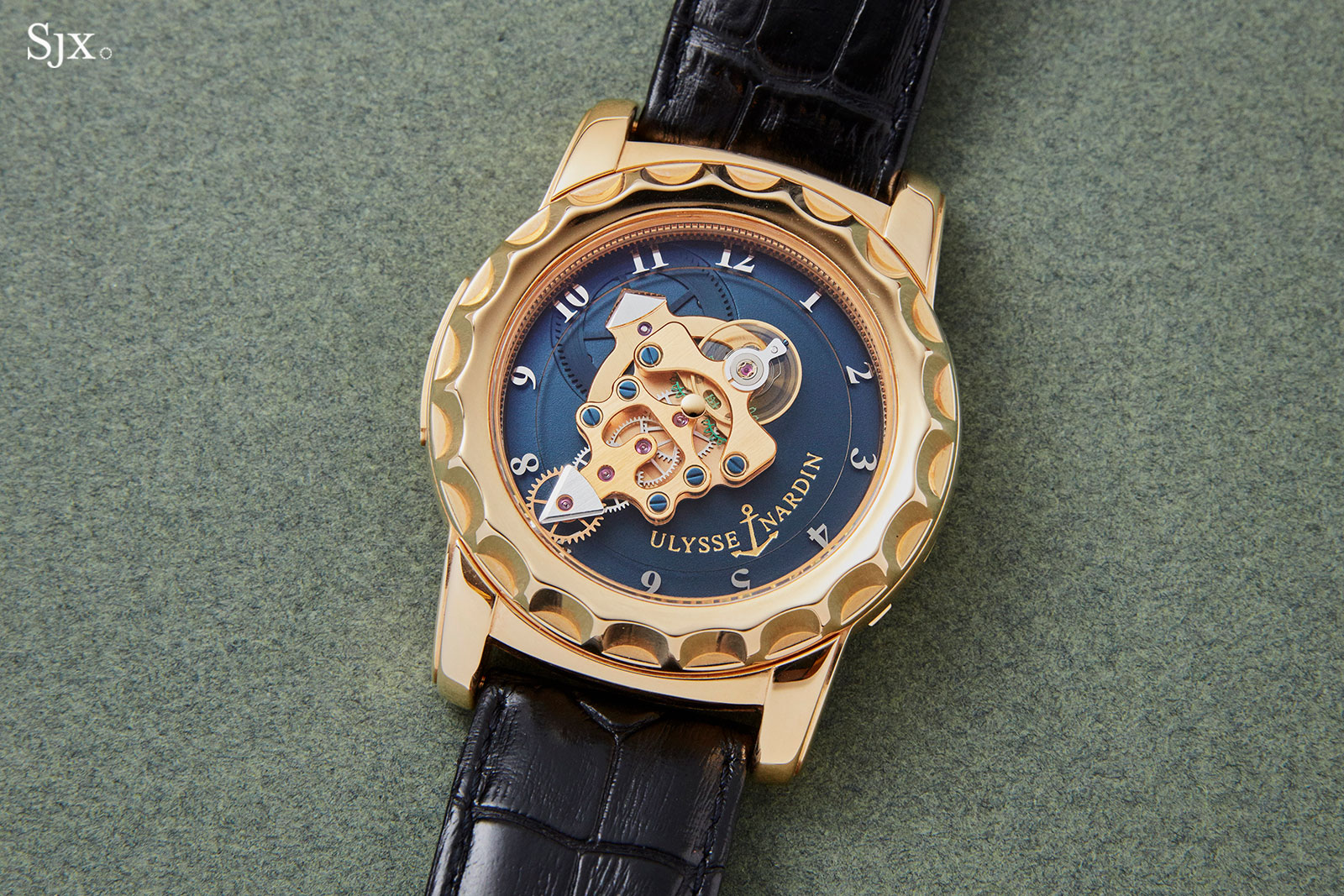 Silicon boasts several inherent benefits over traditional metals. It does not oxidize or creep over time, thus maintaining its mechanical properties and performance over extended use. It is also non-magnetic, and resilient to temperature changes when coated with silicon dioxide, both tangible advantages in the daily function of a wristwatch.

The production of silicon components also allows for higher precision over its metal equivalents. Silicon parts begin their life as a solid, cylindrical single crystal ingot grown in a crucible, which is then sliced into thin wafers. Components are then chemically cut out of each wafer, typically by deep reactive-ion etching (DRIE).

In comparison, metal hairsprings are traditionally made by drawing thin wire through progressively narrower rollers to flatten them, till the desired thickness is achieved. This process results in a wire with tolerances within a few microns, versus the sub-micron precision of silicon parts made via DRIE.

Despite being only microns, such variances translate into a noticeable errors in timekeeping on the wrist, as unwanted variations in thickness along its length affects the stiffness of a hairspring, which in turn greatly affects timekeeping accuracy.

While the production process is generally similar, the structure of the silicon differs between the CSEM and Master Dynamic hairsprings. More specifically, the difference lies in the angle of the planes that the silicon is cut from.

Silicon is an anisotropic material – in other words, it has different physical properties depending on its direction or orientation. A common example of anisotropy is wood, which is strong along the grain but weak across it. Silicon is anisotropic because it has a crystalline, diamond cubic lattice structure. Therefore, cutting the silicon wafers at different angles will lead to different overall properties of the silicon parts.

Various forms of silicon wafers each have their own internal crystalline structure. CSEM’s patent for silicon hairsprings is specific to the production of hairsprings from (001) silicon wafers, which is the commonly used orientation with the DRIE process.

Meanwhile, Master Dynamic was exploring an alternative – the potential of hairpsrings made from (110) wafers instead, which are angled offset at a 45° plane to the (001) silicon. Consequently, this led to a new patent – different from CSEM’s – that highlights the benefits of using (110) silicon wafers.

In its patent filing, Master Dynamic notes that (110) silicon is more directionally sensitive than (001) – a property it claims to be beneficial as it makes it easier to fine-tune the hairspring’s stiffness via adjusting the part’s shape. The adjustment is possible with the precision of the DRIE manufacturing process.

Another convenient benefit of (110) silicon hairsprings is that its edges can be chamfered, unlike its (001) counterpart. This is thanks to its orientation, which facilitates the creation of bevels along the parts via wet etching after the DRIE process. By using chamfers, stress concentrations along sharp edges can be avoided which otherwise leads to brittle fracture of the silicon parts.

Ultimately, why do planes and wafer types matter? It turns out all that might be an answer to an old problem in watchmaking – isochronism.

Isochronism refers to the constant oscillation period of the hairspring as the balance wheel goes “tick” and “tock”. In other words, it should keep the same, accurate time regardless of its orientation (face up or face down, for instance) or the state of its power reserve.

The problem is that the hairspring “breathes” – as it oscillates back and forth, the geometry of the rotating hairspring deforms and bunches up along one edge as per the image below. This causes a shifting centre of gravity and also induces a radial force onto the balance wheel staff, resulting in friction.

And this compromises isochronism – on full mainspring wind, the balance wheel swings in a greater arc versus a near empty mainspring, thus this friction force will vary resulting in timing variations as the watch operates.

Of course, friction should also be avoided as it results in faster wear of the parts.

This is where silicon fabrication technology is the ideal solution. Unlike rolled metal hairsprings, silicon is etched from a wafer and therefore can be made into any planar shape or form. Thus, its thickness along different sections can be varied.

Specifically, Master Dynamic has created a flat hairspring that has a stiffer bifurcated section at its outermost end. This eliminates the lop-sidedness of the breathing hairspring and maintains its concentricity during oscillation, which minimizes the radial forces and hence preserves isochronism.

As a bonus, the ability to fabricate silicon into any planar shape allows optimisation of the collet mounting, the end point in the centre that attaches to the balance staff. Compared to a regular metal hairspring that has a separate collet, the silicon hairspring and its collet are a single part, simplifying construction.

But the biggest issue with silicon is its brittle nature – a typical, rigid collet design may fracture from stress when mounted onto the arbour of the balance staff. To address that, Master Dynamic devised a clover-shaped collet, essentially a collet with an integrated spring, that has some flexibility as it attaches onto the arbour. This eases assembly and reduces the risk of damage.

The pursuit of isochronism – a silicon overcoil?

The brittleness of silicon also means cannot be manually adjusted by watchmakers, unlike malleable metal hairsprings that can be carefully tweaked by hand. That is not usually a problem, since freshly etched silicon parts emerges perfectly formed and can be installed without any adjustments. And this leads us to why the topmost photo is fascinating – it’s a silicon hairspring with an overcoil.

The impossible made possible, a silicon hairspring with an overcoil

The overcoil was the traditional solution by watchmakers to resolve the isochronism issue. By bending a metallic hairspring such that the spring passes over itself, it changes the geometry of its oscillation and thus retains its concentricity as the spring breathes.

A skilled watchmaker is needed to bend hairspring by hand to form the overcoil, making it a standard feature in high horology watches historically. But it is rarely seen in mass-produced watches today, being too labour intensive and also redundant since good timekeeping can be achieved with low-cost, mass-produced movements.

Given the antimagnetic and thermal stability properties of silicon, a silicon hairspring with an overcoil would, in theory, be the ideal chronometer hairspring. However, as silicon is brittle, it is impossible bend a flat hairspring into shape as one would a metal hairspring. And because silicon hairsprings are etched from a wafer, they are, by definition, flat to start with.

Master Dynamic’s approach however, is more straightforward. They form the overcoil by folding the hairspring over itself, like closing a book. The trick in bending the silicon without brittle fracture is to apply continuous heat, which relieves the internal stresses of the material as it is gradually bent into shape.

Creating an overcoil via this method results in a “kink” in the overcoil (21 in above image). In the current Master Dynamic patent, this is unavoidable due to the folding process of the two halves of the hairspring, which is presumably automated and done by machine. Nevertheless, the patent does briefly describe the potential for bending the hairspring in a manner akin to the traditional method used by watchmakers for metal hairsprings.

Master Dynamic already has the capability to produce its patented silicon hairsprings, but they have not been adopted by watch brands yet, although the company is exploring supplying hairsprings to several Swiss movement manufacturers. According to a company spokesman, at the time of publication of this article, Master Dynamic just received automatic movements from a major movement maker as a trial run.

Even though widespread adoption of the Master Dynamic hairspring is some ways off, such developments are notable as they open a new avenue into practical performance improvements for mechanical watches. A promising and potentially significant breakthrough came to market recently when TAG Heuer unveiled its carbon composite hairspring, which promises all of the advantages of silicon but without its fragility.

Just like synthetic rubies or modern lubricants, the day might come when traditional watchmakers readily accept the use of silicon parts in high-end watches as an equal of traditional components.

Correction June 13, 2019: Master Dynamic is not the only company outside of Switzerland making silicon hairsprings; Firehouse Horology is also producing them.