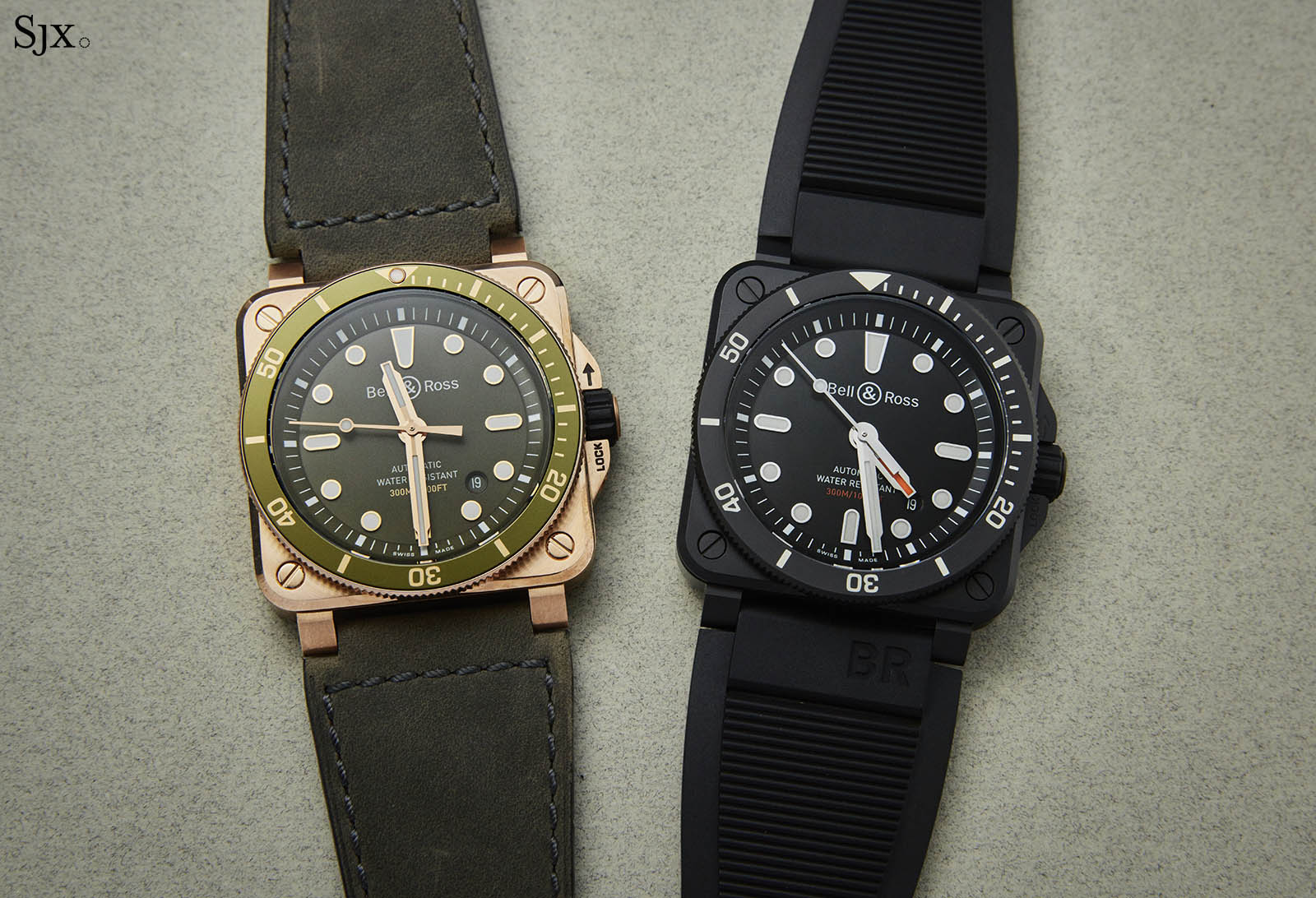 Launched two years ago with a steel case, the BR 03-92 Diver took the signature aviation inspired design of Bell & Ross (B&R) into the sea. It was a proper dive watch that combined the iconic square case with a 300m depth rating and a rotating bezel.

At Baselworld this year, B&R unveiled two new iterations of the BR 03-92 Diver, with cases in bronze and matte black ceramic respectively. Though fundamentally identical, each is drastically different from the other in look and feel.

The road to the deep

But first a quick recap of B&R’s past dive watches. Though the brand is today best known for its military aviation watches, B&R got its start making watches (which were essentially rebadged Sinn timepieces) for professionals in various spheres, from bomb disposal engineers to deep sea divers.

One of its earliest dive watches was the Hydromax (also known as the Hydro Challenger) of 1997. It was a compact, round watch with a quartz movement boasting a ludicrous depth rating of 11,100m, thanks to a case filled with transparent fluorinated oil that was incompressible.

A decade later, the brand was producing its own watches and unveiled the BR 02, a tonneau-shaped dive watch with a 1000m depth rating, internal rotating bezel and helium escape valve. Then came the BR 03-92 in 2017, the most logical expression of a dive watch for a brand driven largely by military-inspired design. 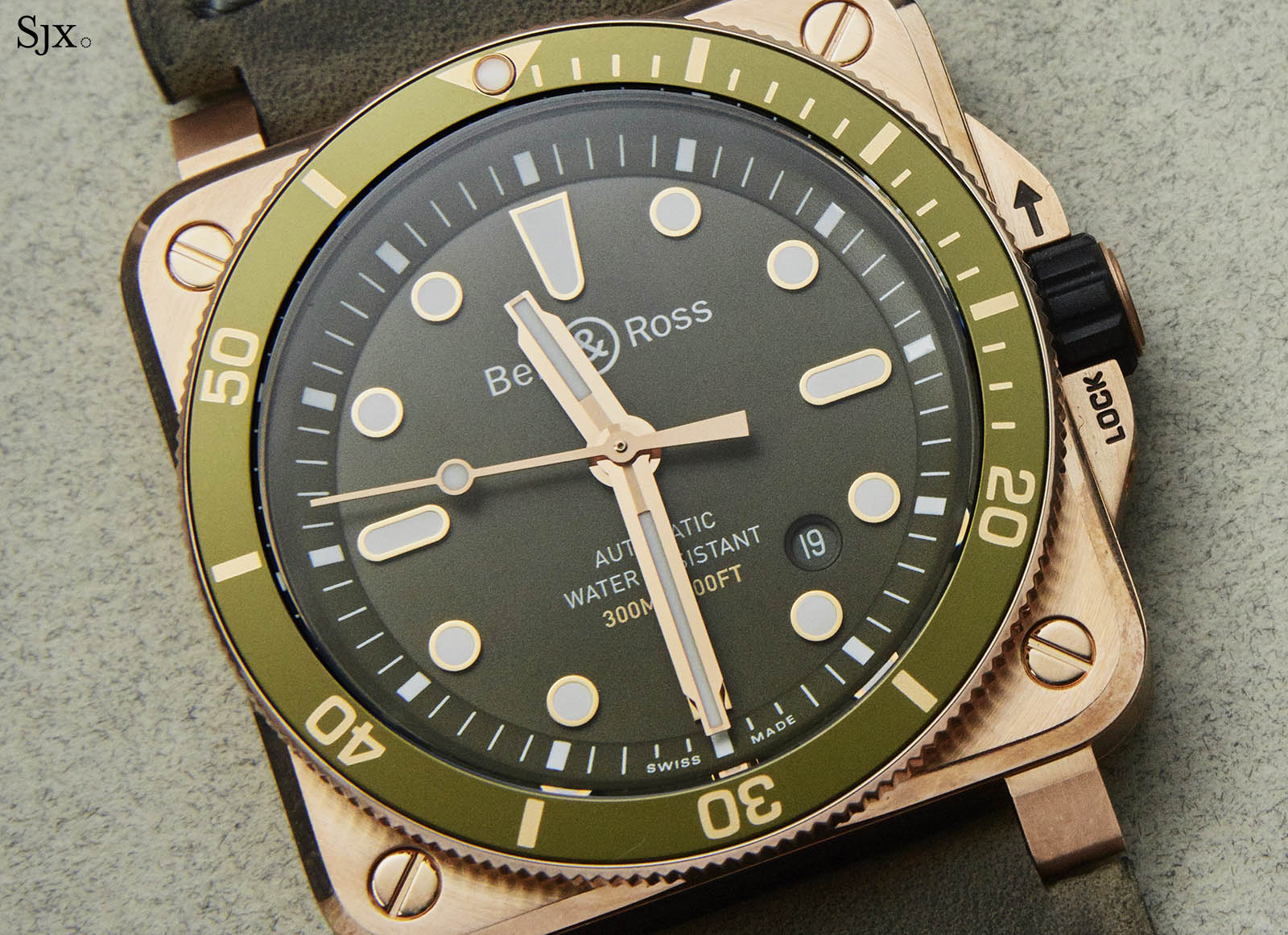 Crucially, bona fide square watch cases are inherently more difficult to seal against water as the shape means a screw-down case back is impossible.

An easy way out is a square case with a round back, but B&R kept the square shape and accomplished the 300m water-resistance by fortifying the crystal and case back, resulting in a case that is thicker than the standard BR 03-92. As such, the sapphire crystal is 2.85mm compared to 1.8mm on the ordinary BR 03-92, while the case back is 2.8mm. 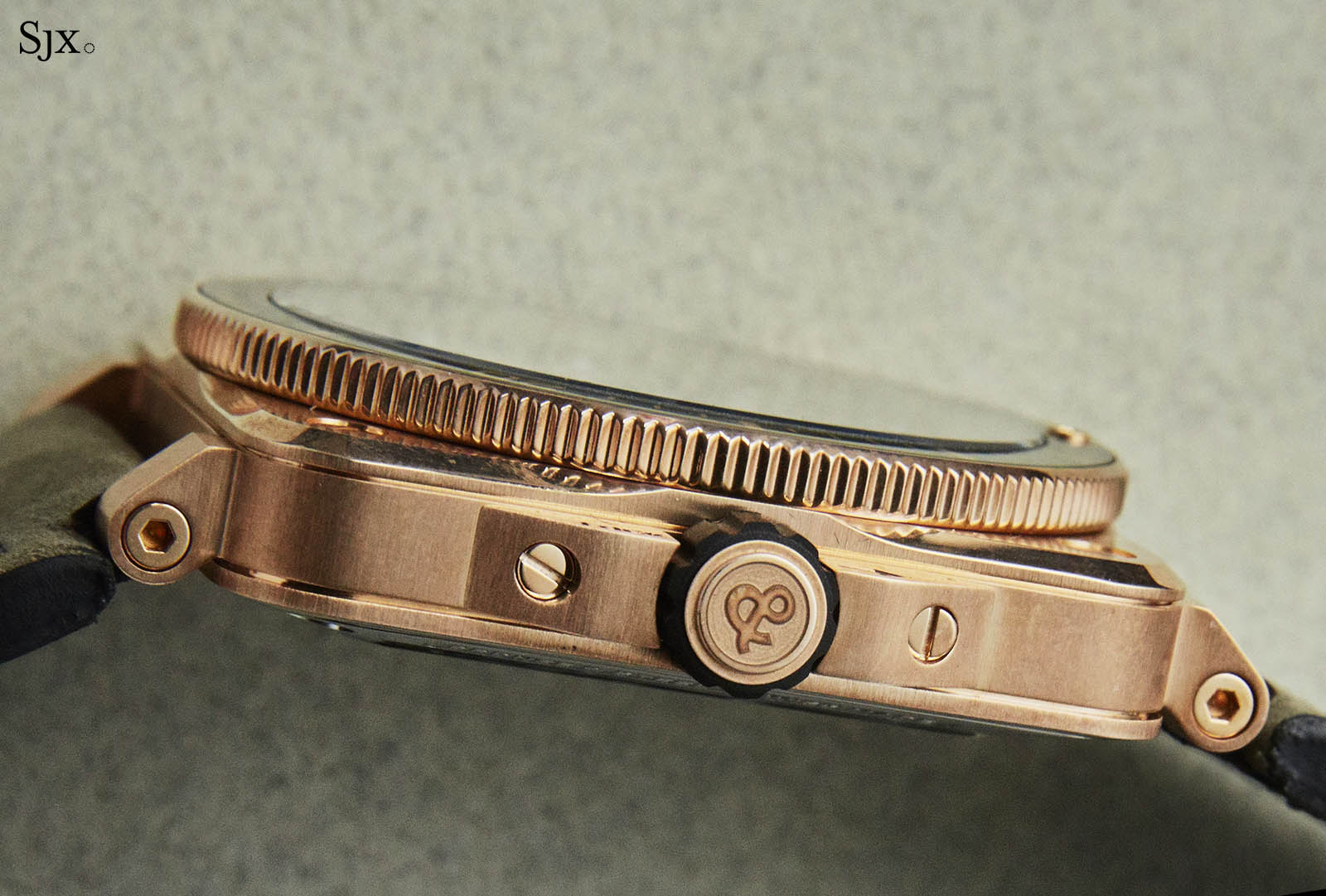 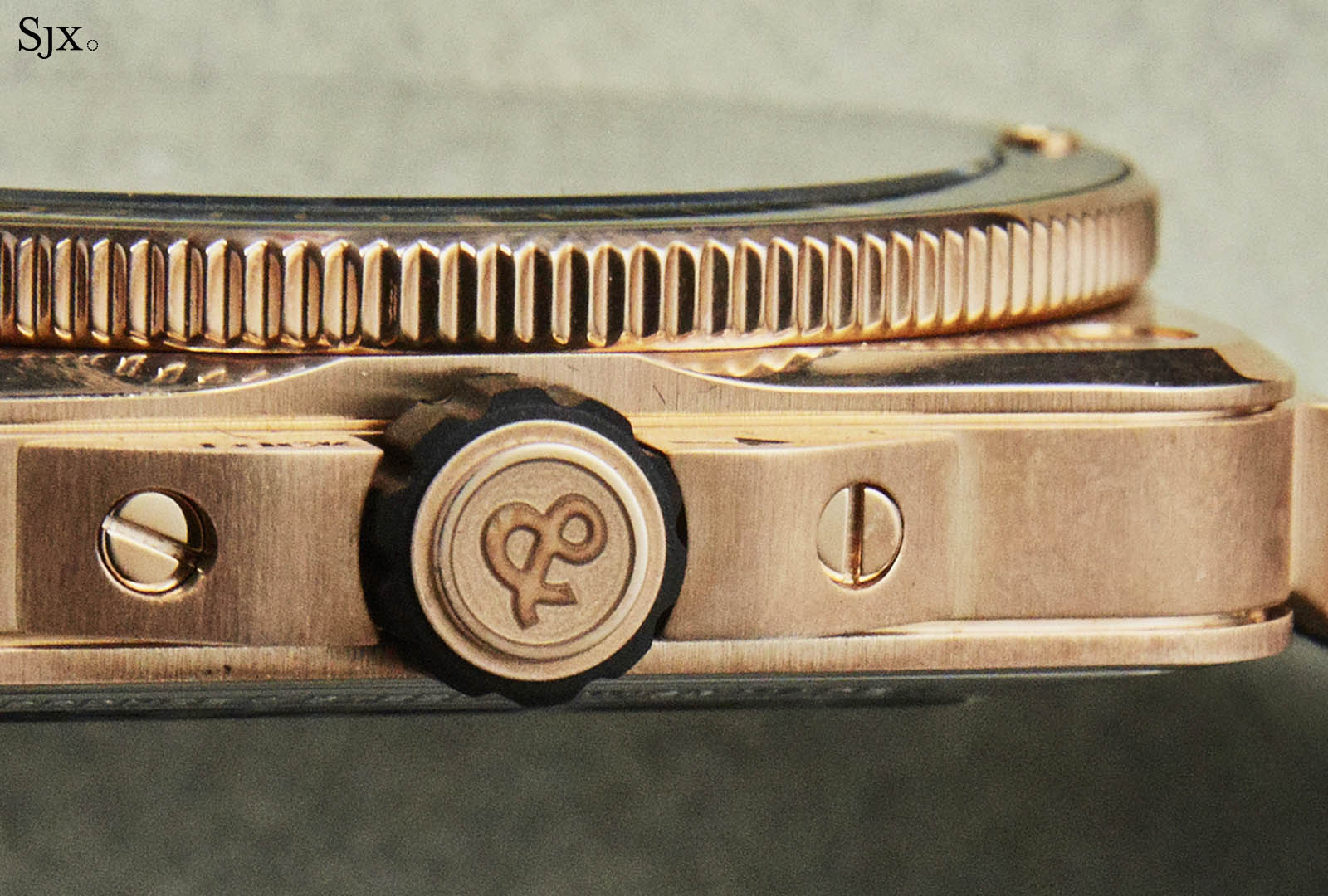 Part of the thickness of the crystal is hidden by the unidirectional bezel that sits high above the dial and extends over the edge of the square case just enough for ample grip.

Also unique to the BR 03-92 diver are the crown guards, bearing the “LOCK” and an arrow that indicate the direction in which to screw down the crown. Both are unnecessary but small enough to be unobtrusive. And the crown is rubber-coated for better grip, making tactile usability of the watch – which is the bezel and crown – excellent. 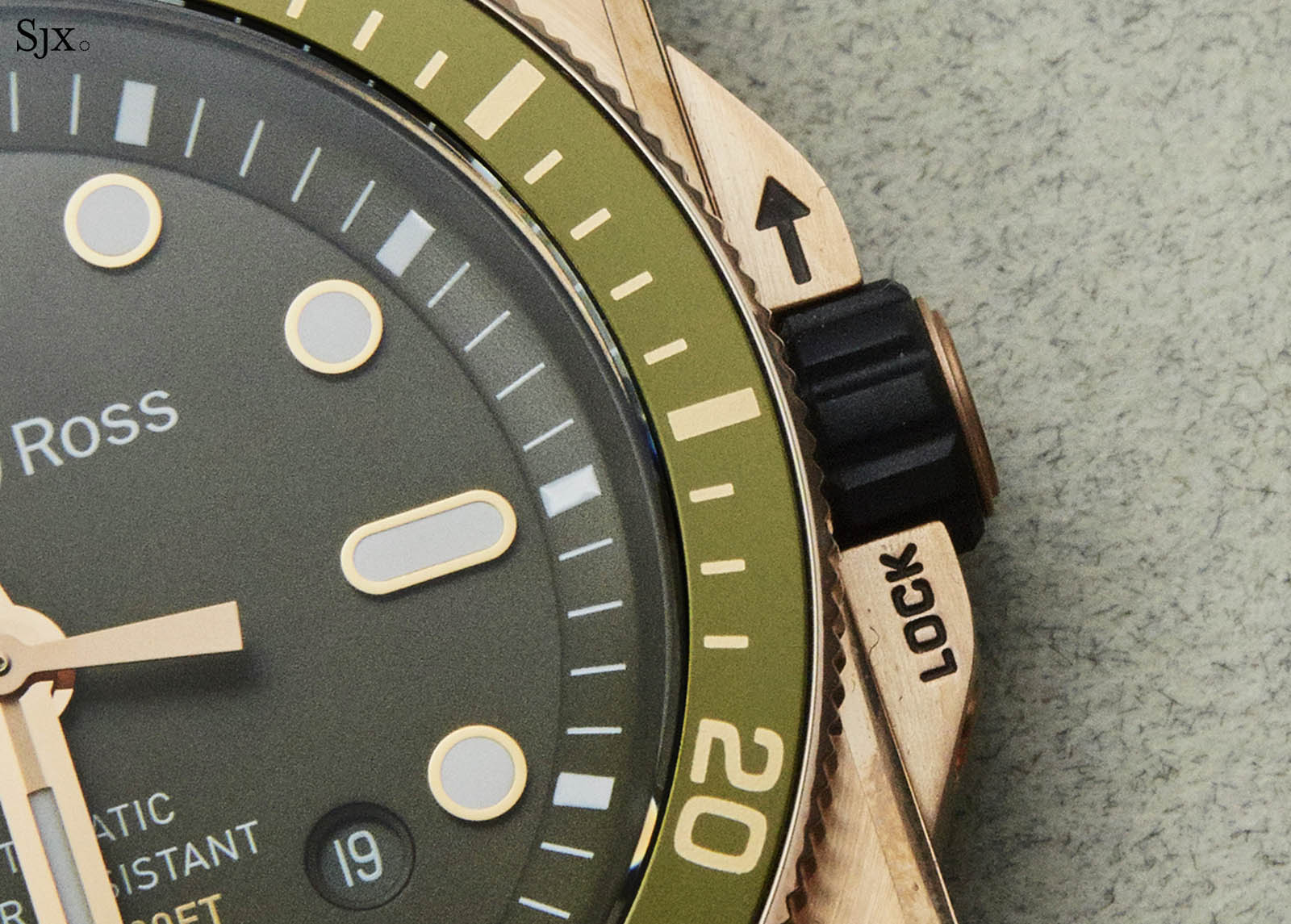 The case of the BR 03-92 Diver Green Bronze is made of brushed CuSn8, or phosphor bronze, an alloy that is 92% copper and 8% tin. It is the same alloy used for the case of the Panerai Submersible Bronzo and is distinguished by its reddish tone, a result of the high copper content.

In contrast to aluminum-based bronze alloys like that used in the Tudor Black Bay Bronze, phosphor bronze oxidises more dramatically, developing verdigris, which is a sunken treasure green patina, over time.

And because bronze can cause skin irritation after prolonged wear, the watch has a steel case back. 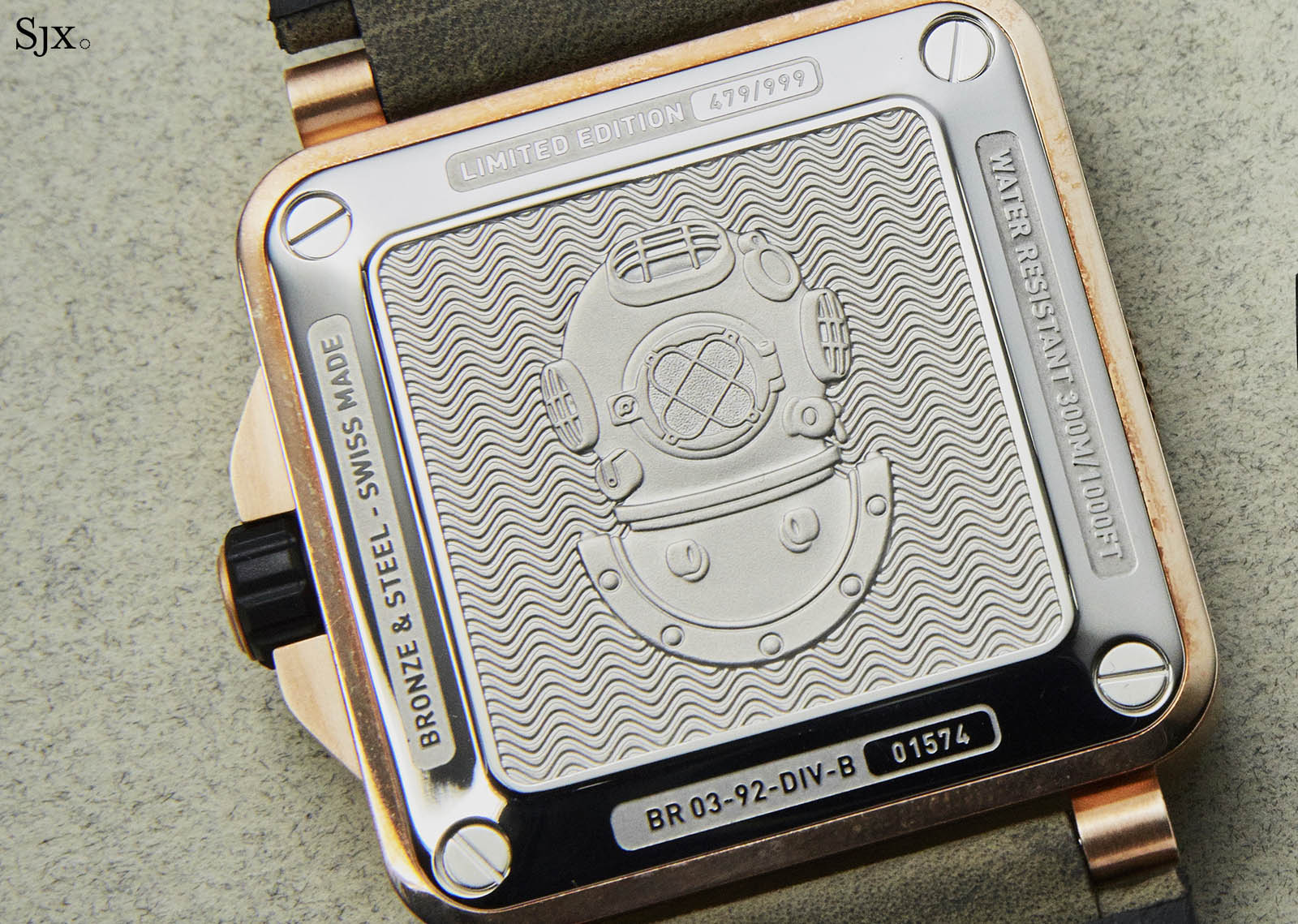 The bronze diver has a khaki green dial – a common pairing with bronze but nevertheless handsome. It has a classic dive watch design with applied dot indices and elongated quarter markers, which are gold-plated and filled with Super-Luminova.

Unlike last year’s bronze BR 03-92 diver made for Singapore retailer Cortina Watch, the new diver has an anodised aluminium bezel insert to match the dial, giving it a more distinctive look. 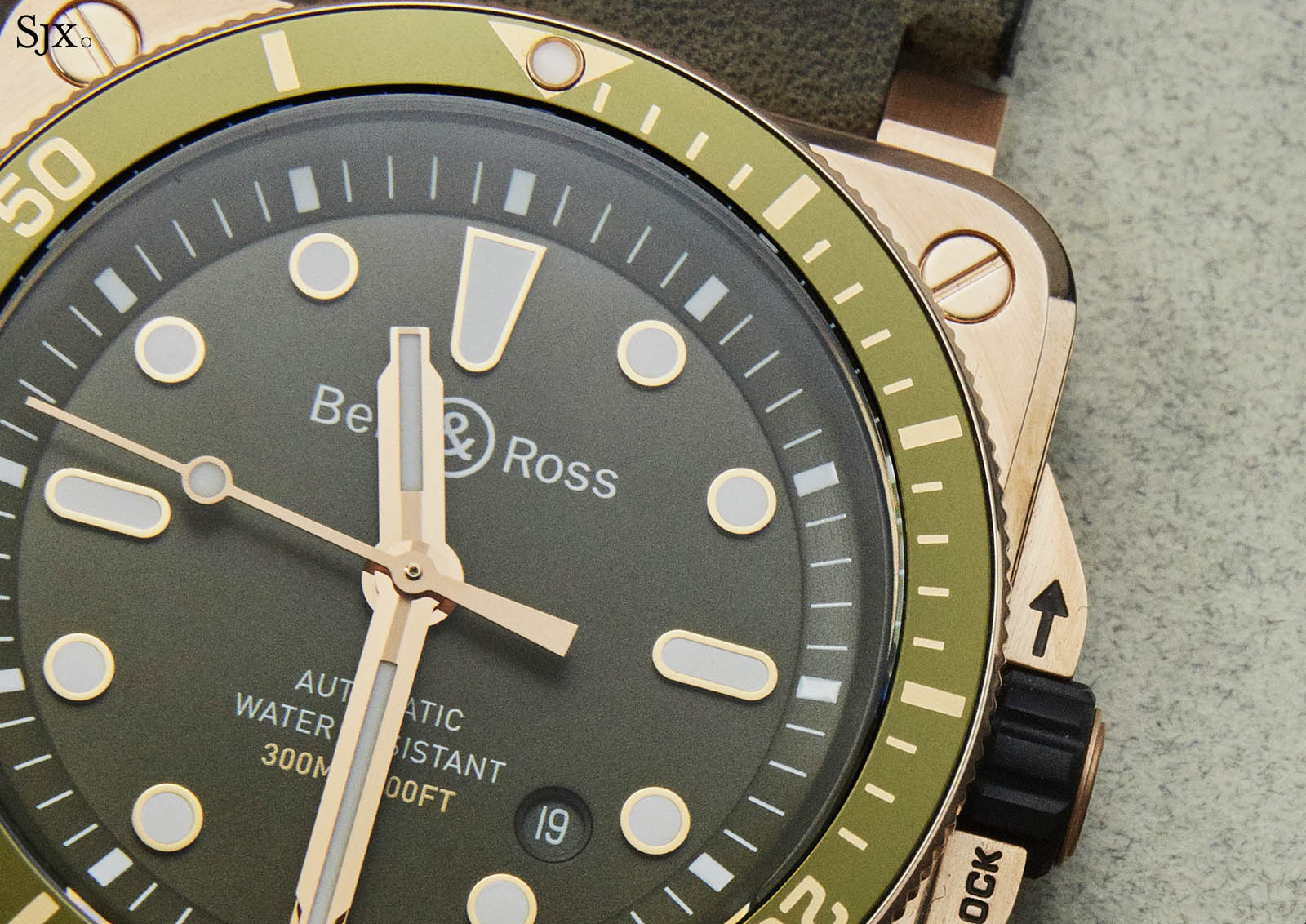 While the bronze version conforms to a convenient stylistic formula, the second iteration of the diver is in all-black, matte ceramic – severely functional, no-nonsense.

B&R has been producing ceramic watches for several years now, thanks to its connection to Chanel. The French fashion house owns a majority stake in B&R and all of G&F Châtelain, a case and bracelet maker in La Chaux-de-Fonds that’s the same company responsible for one of the most distinctive ceramic watches in watchmaking, the Chanel J12, along with exotic watch cases for the likes of MB&F. 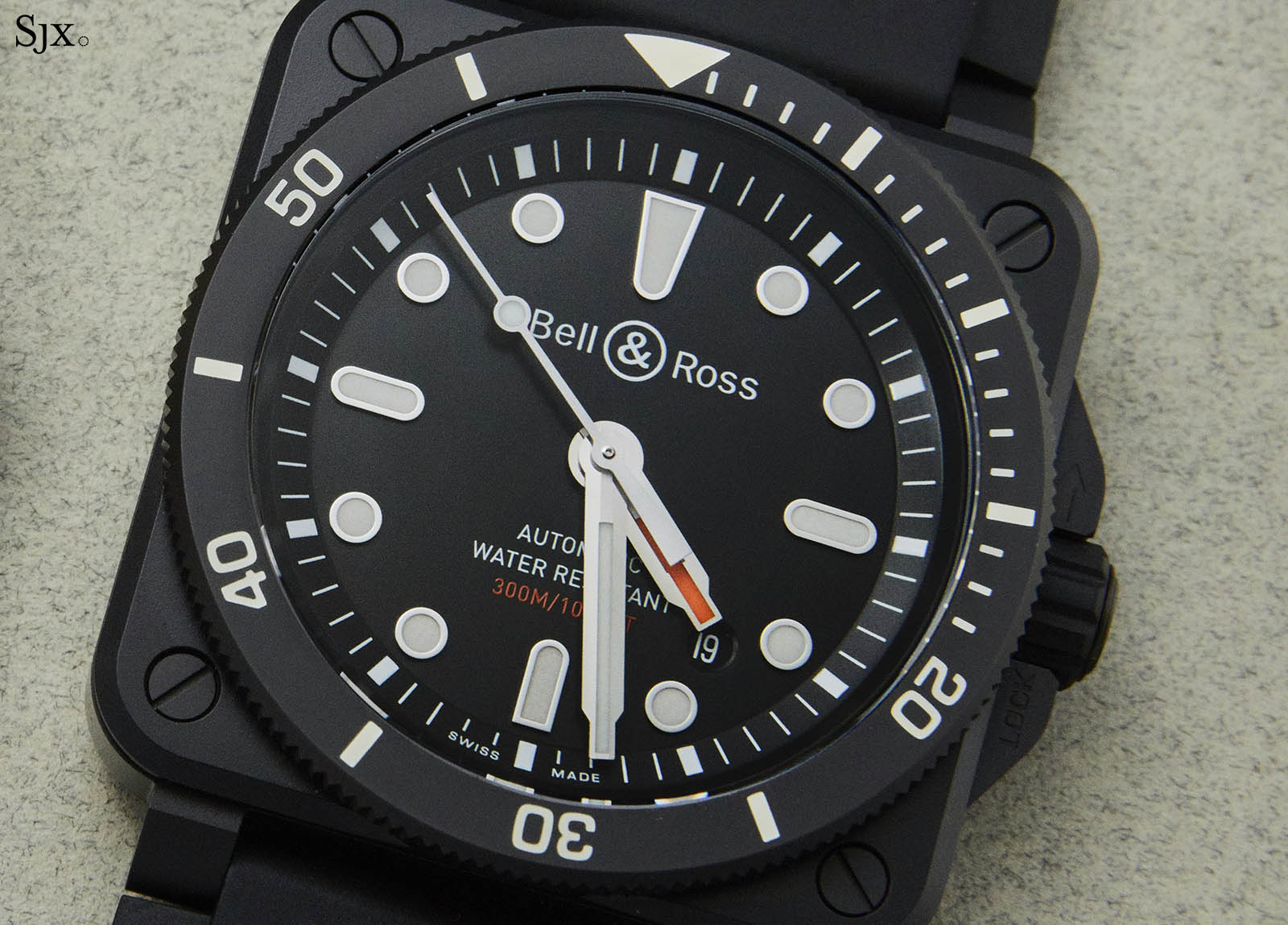 The look brings to mind B&R’s basic but effective pilot’s watches, as well as the early timepieces produced for French military and police units.

Notably, unlike other BR 03-92 divers that came before, the bezel is also in ceramic, making this the coolest iteration yet of the square dive watch. 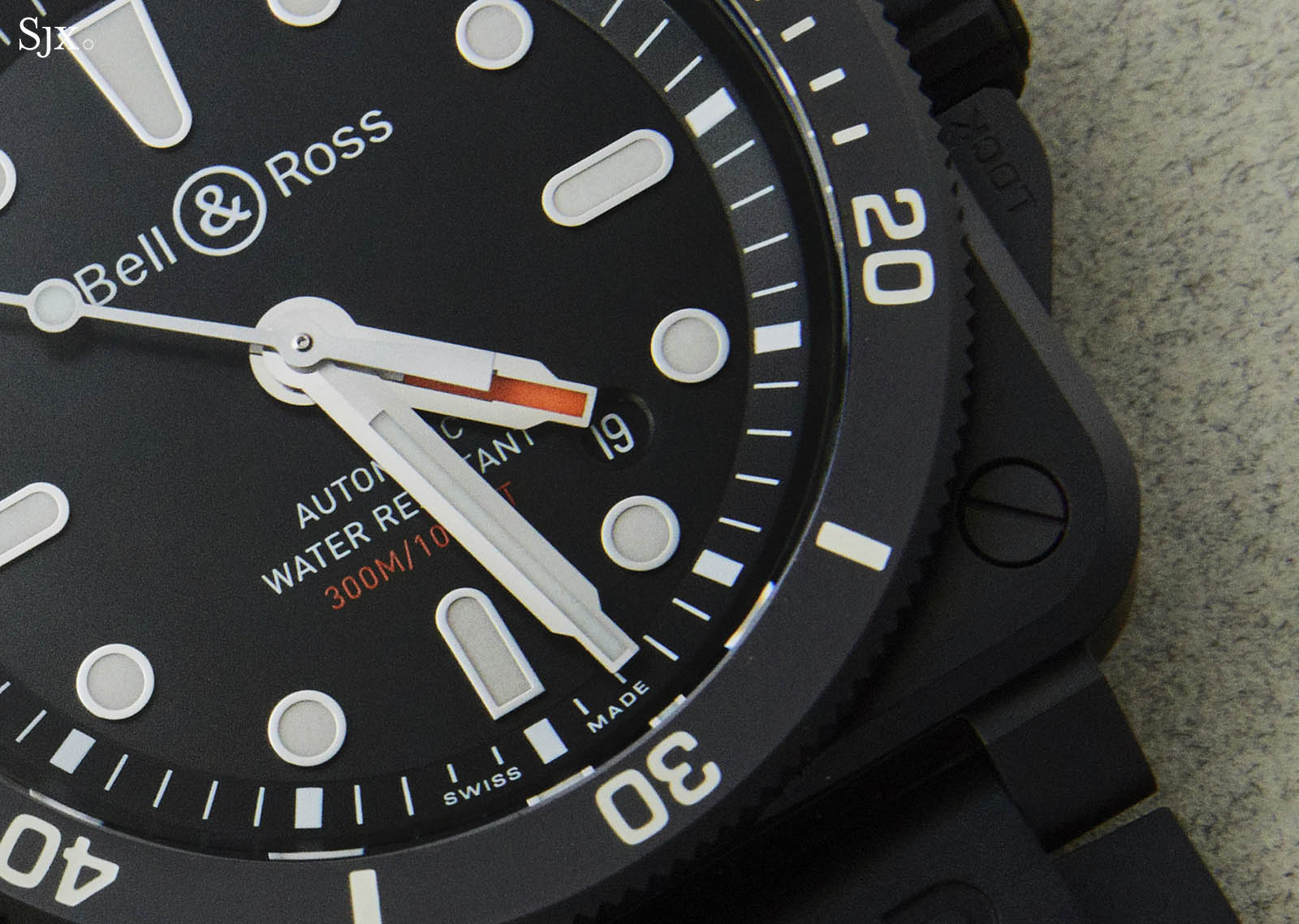 In addition, as opposed to the bronze version, the hour hand is distinct from the minute hand, as was the case with several historical mil-spec dive watches. 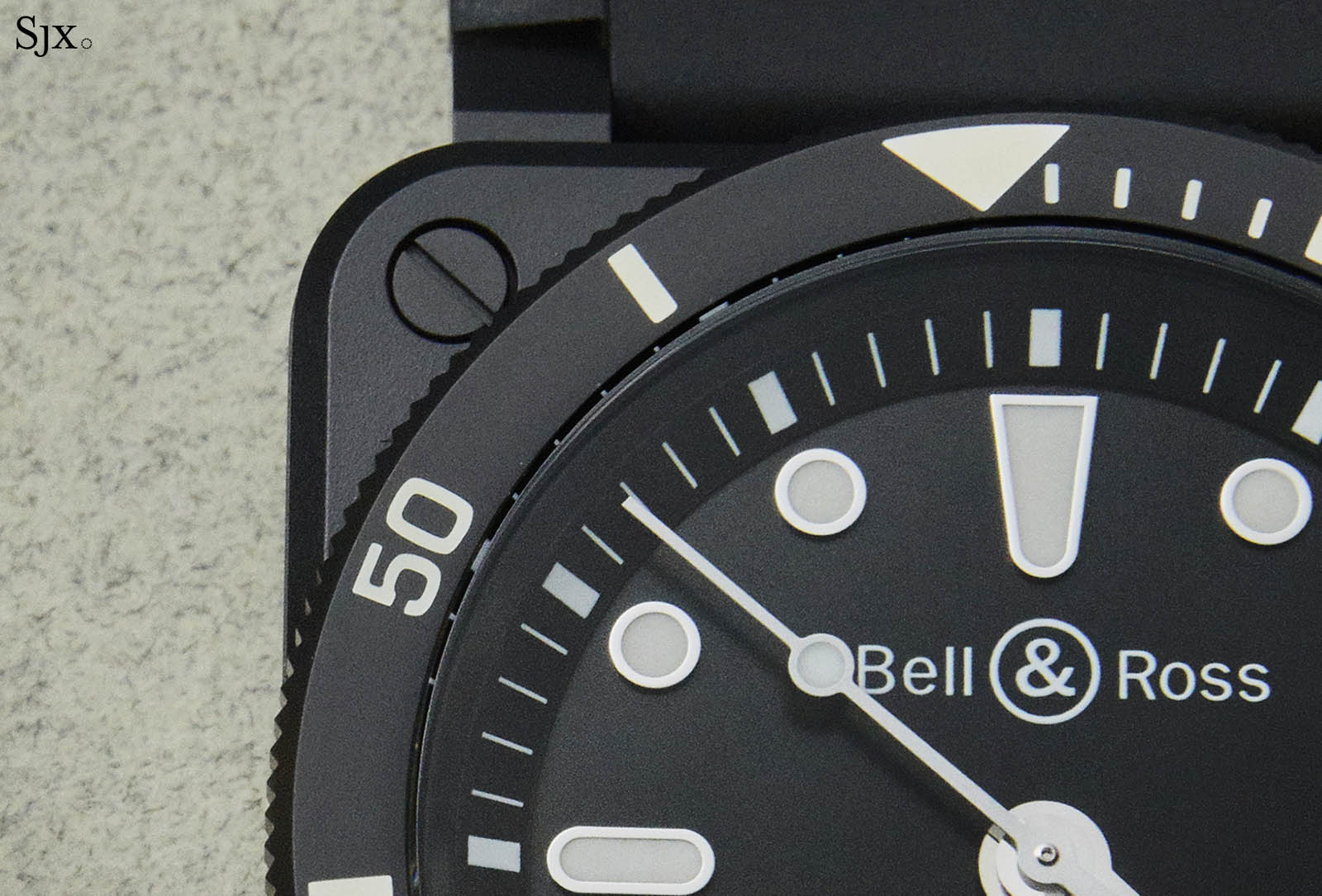 Measuring 42mm by 42mm, the ceramic case is held together by screws that span the height of the case, which explains why the screws are perfectly aligned. They are nuts secured by actual screws visible on the case back. The case of the bronze diver has an identical construction. 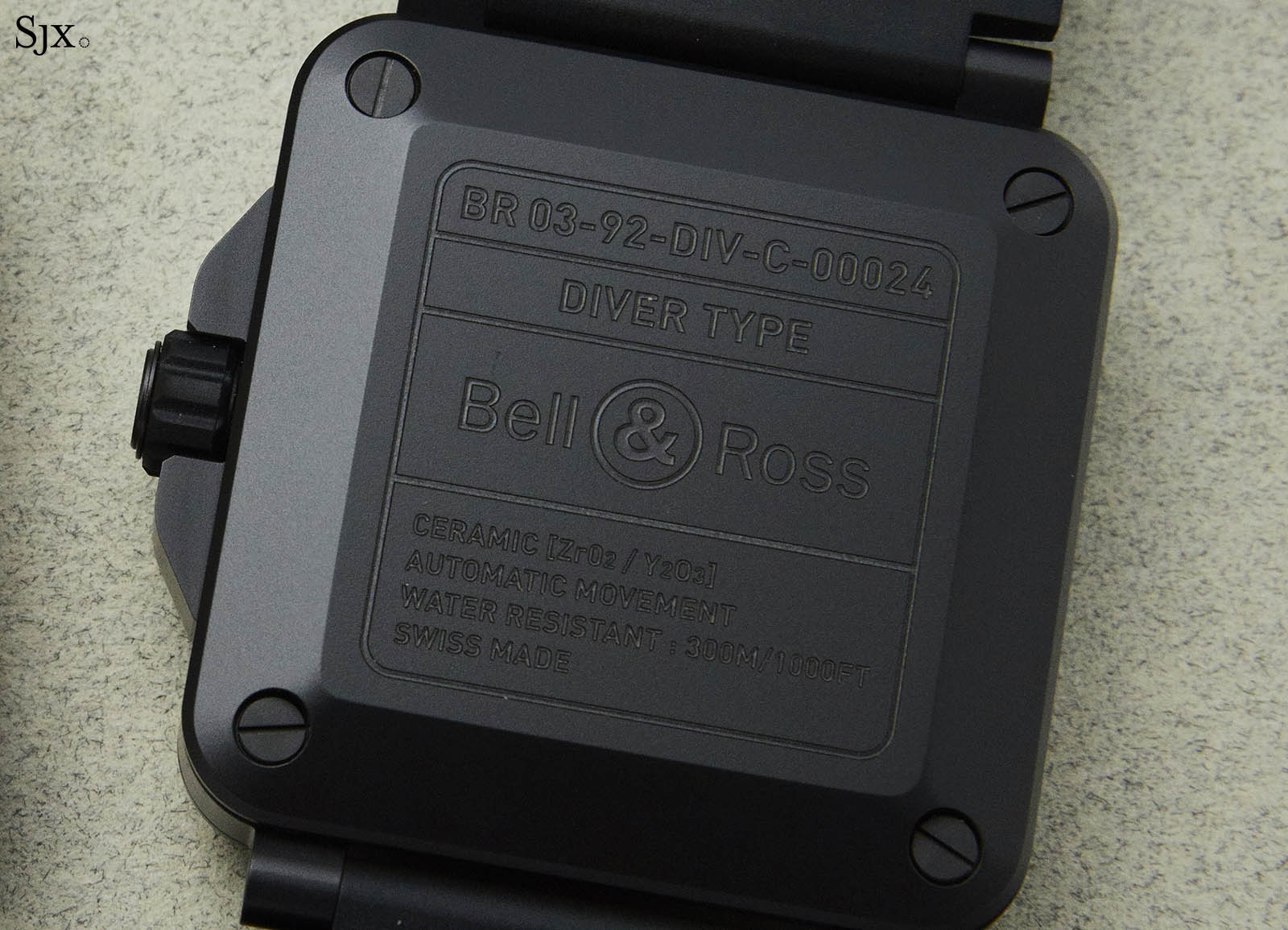 Though the case is elaborately constructed, the movement remains the prosaic BR-CAL.302, which is a Sellita SW300. A clone of the ETA 2892, it’s a basic, robust movement that is easy to service, but has the downside of a short, 38-hour power reserve.

But it sits inside a Faraday cage, basically a soft iron shield, that protects it from magnetic fields of up to 80,000 A/m, which far surpasses the ISO 6425 standard of 4800 A/m.

While the bronze version is conventionally good-looking, the matte black ceramic version is a form-follows-function contender and undeniably the most striking version yet.

The concept of mixing a round elapsed time bezel with a square case might feel forced with a combination of case materials, but the uniformity of the all-black ceramic diver makes it seem like a single, integrated and harmonious design.