Phenomen is an unusual watchmaking startup. The firm is located in the town of, Besançon, the former centre of the French watch industry where giants like Lip were once based, but its watches are distinctly 21st century. The brand made its debut last year with the Axiom, which is superficially similar to other watches in the segment but is smartly conceived and well made.

The Axiom’s stying and mechanics are the result of the combined talents of Phenomen’s two cofounders: Alexandre Meyer, who spent most of his career styling cars at Groupe PSA, the largest automaker in France, and Sylvain Nourisson, a movement construction who spent his formative years at respected complications specialist La Joux-Perret. The result is a strikingly shaped watch with a cleverly constructed and thoughtful detailed movement. 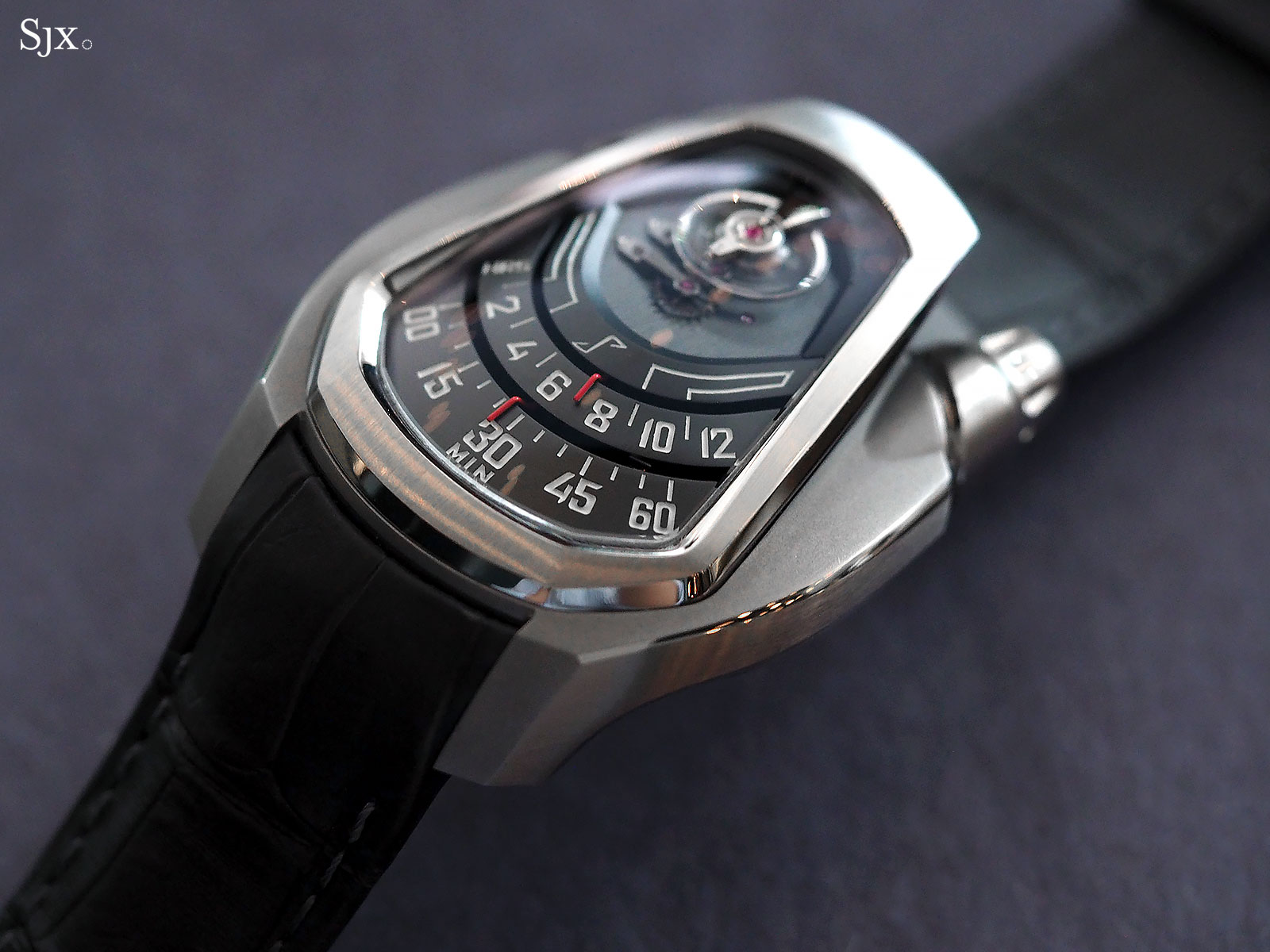 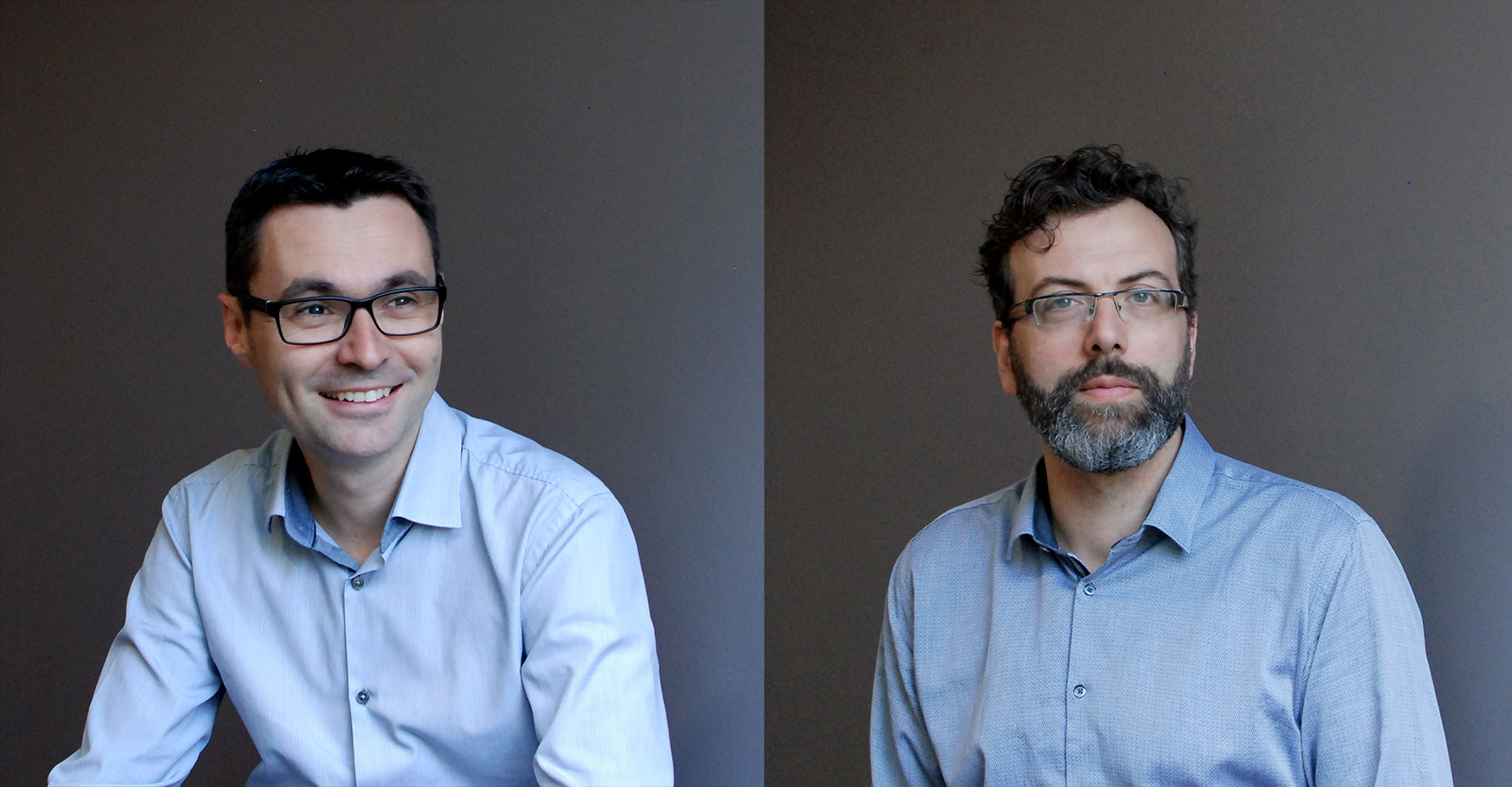 On paper the Axiom seems like a large, but it is smaller than expected, making it surprisingly wearable. The case measures 42mm in diameter, 47mm long and 17mm high, a compact footprint although it sits high.

The curved lugs allows it to hug the wrist well, though the height of the case probably makes it susceptible to knocks. 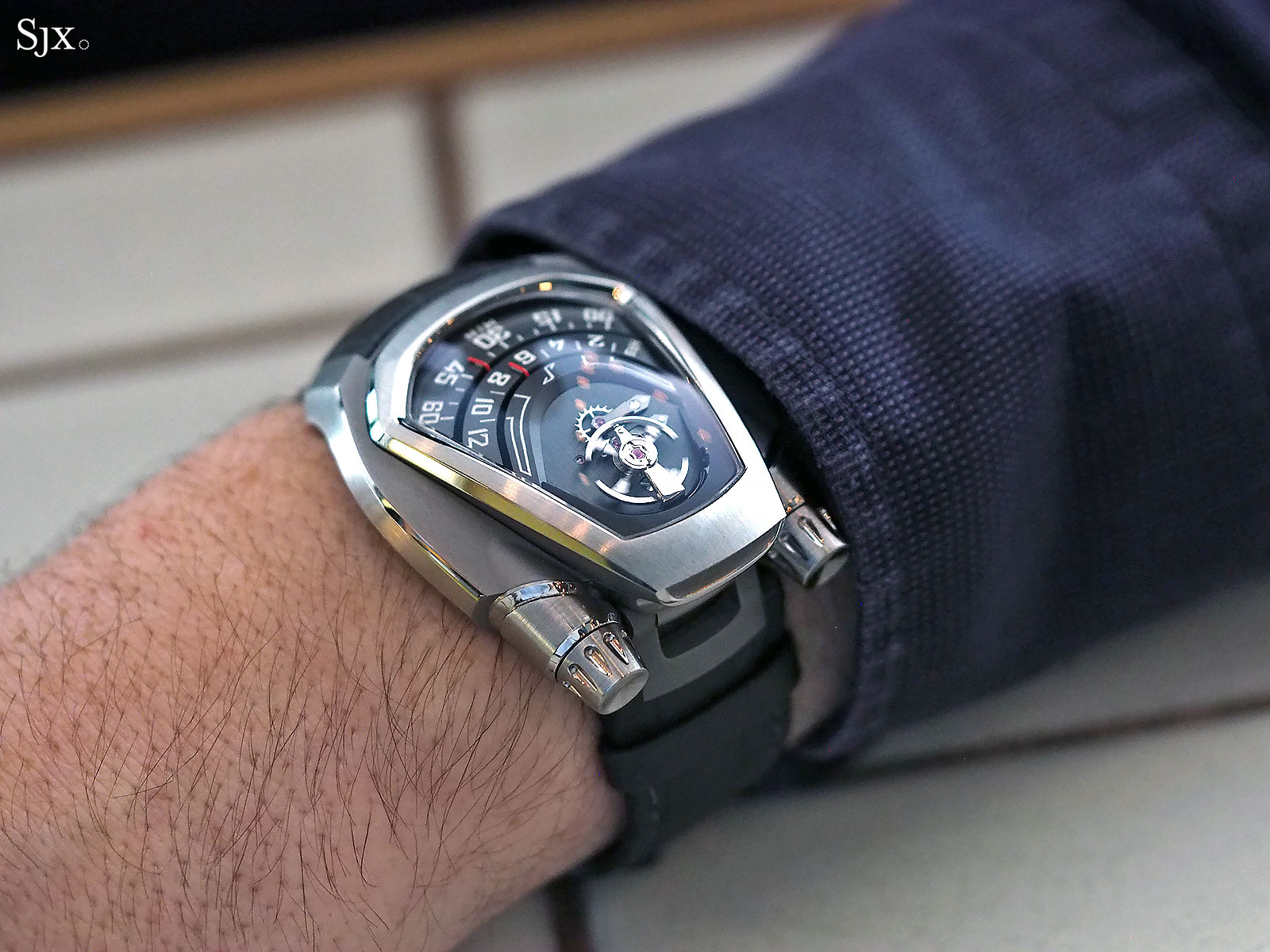 The Axiom on Mr Nourisson’s wrist 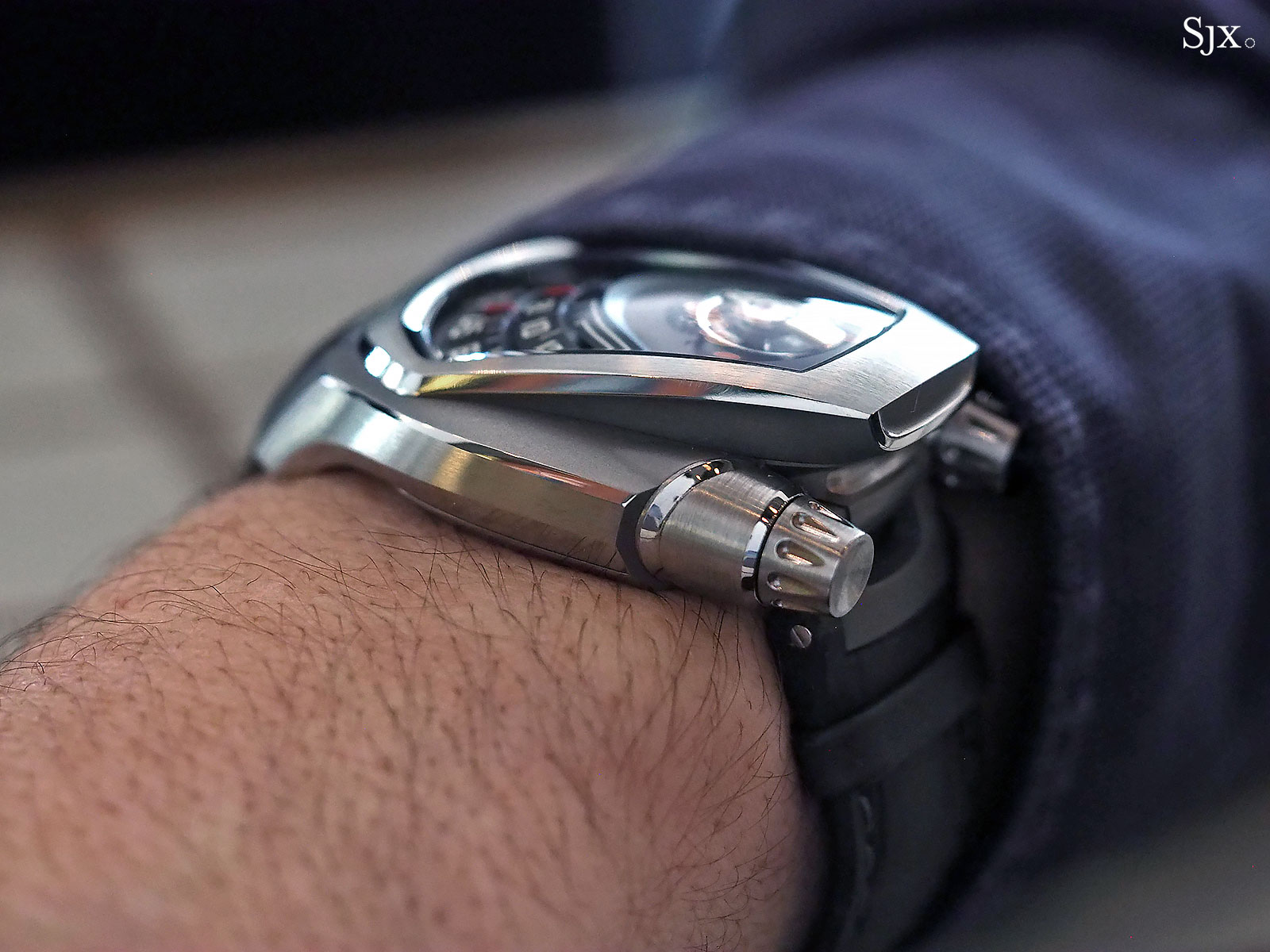 Designed as a driver’s watch, the Axiom indicates the time on an inclined dial, allowing it to be read with the hands on a steering wheel. The twin scales of the dial are inspired by a speedometer, but stay simple and legible with large numerals and hashmarks. As such displays go, this is one of the most legible. 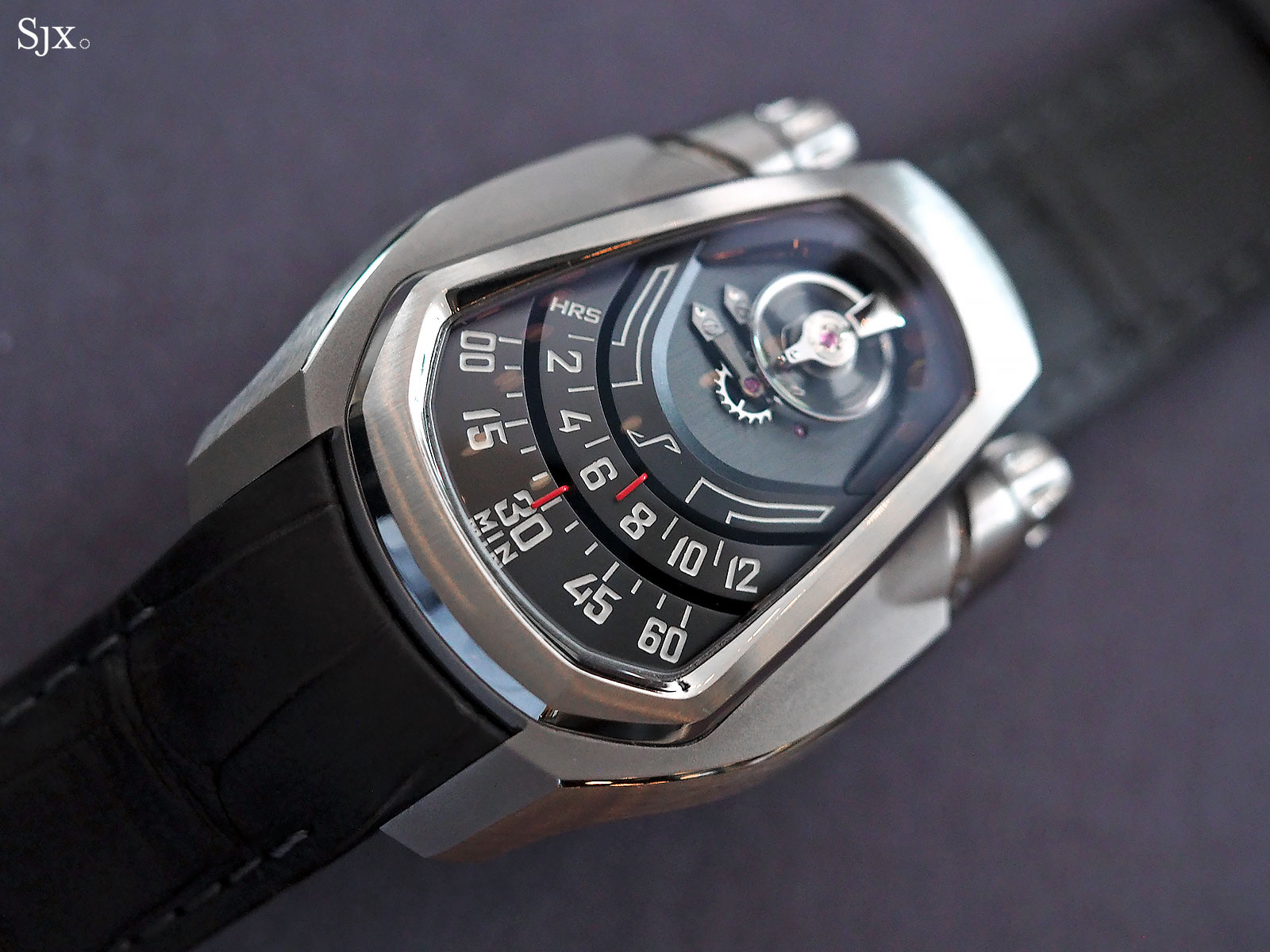 Notably, the hours and minutes are indicated by rods that are individually bent by hand. According to Mr Nourisson, mechanically shaped pins were never quite the right shape, so manually curving the pins is more efficient. 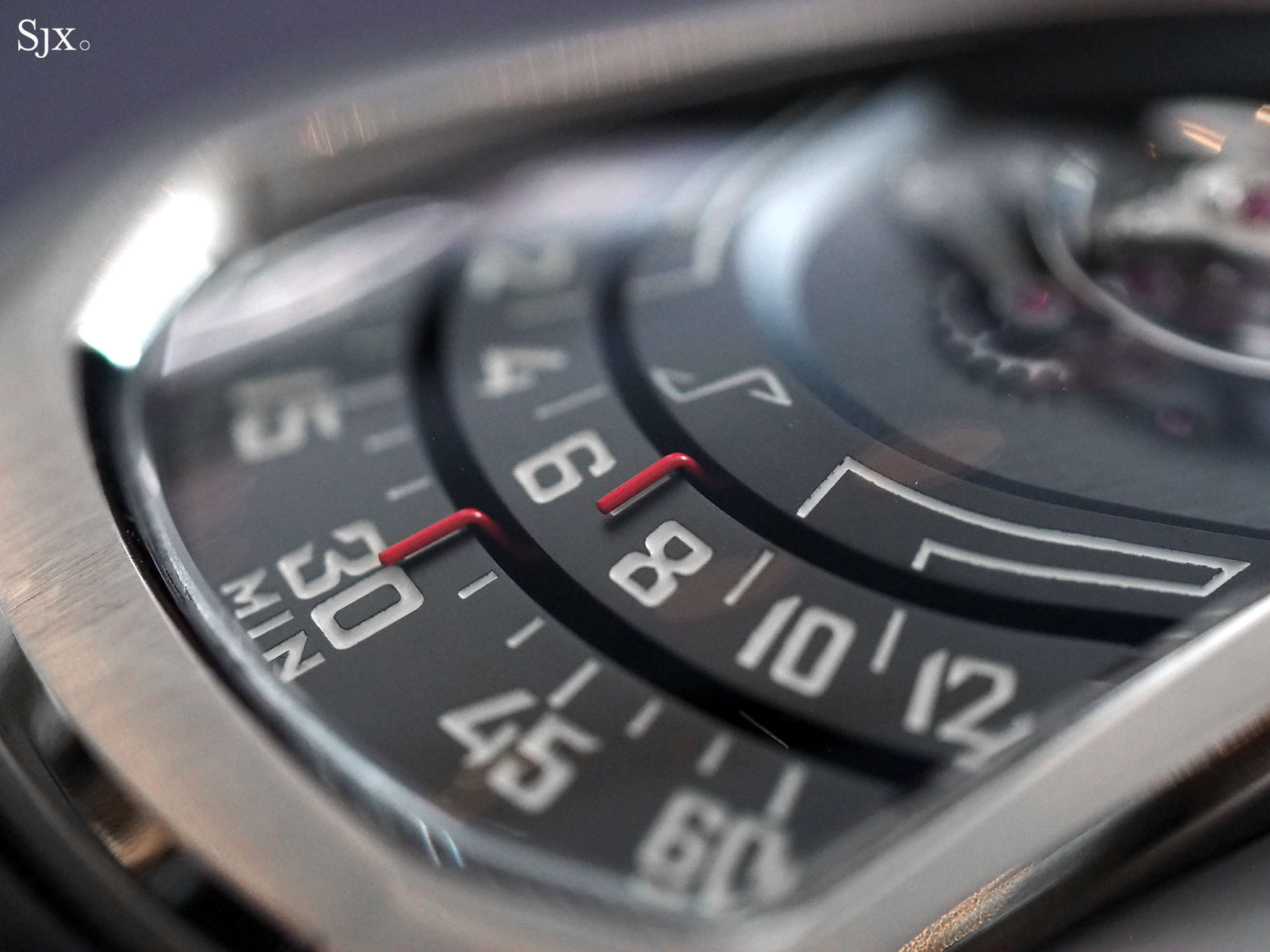 The case is notably well finished, with lots of contrasting brushed and polished surfaces. Most flat surfaces are linearly brushed, while edges and flanks are mirror finished. The long, polished bevel that runs lengthwise along the sloping case top is particularly attractive, tapering towards the back of the watch. 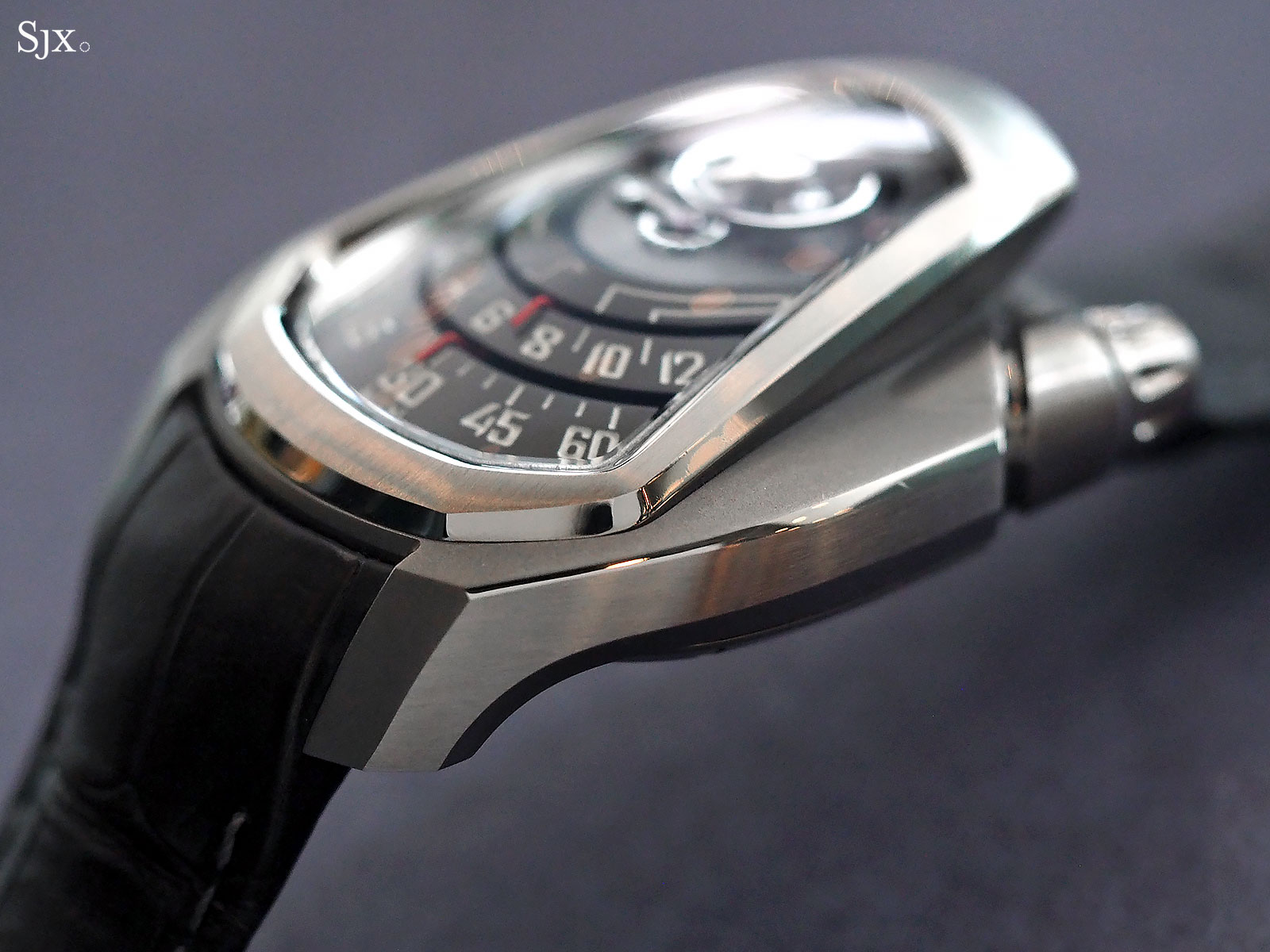 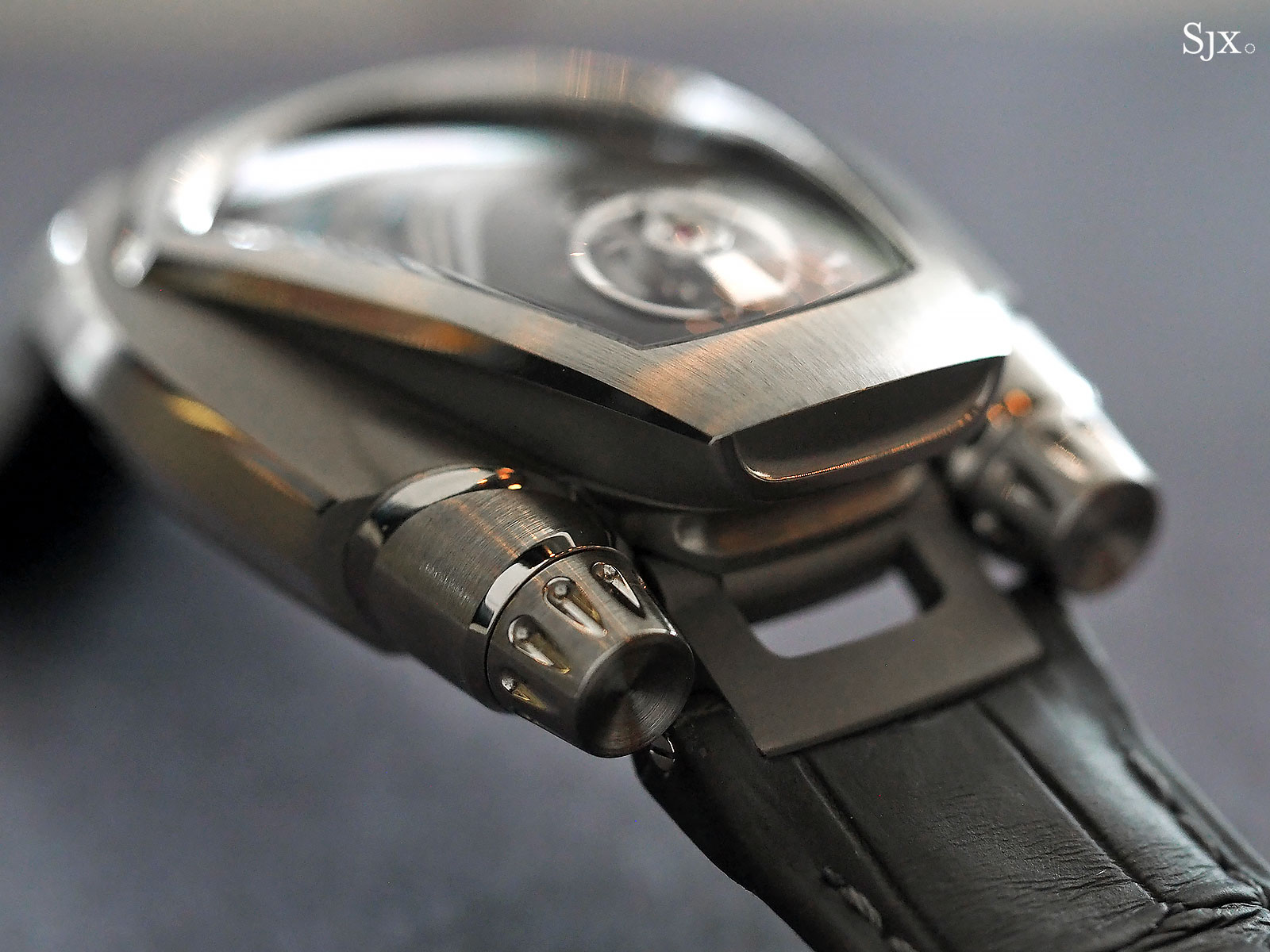 The PH-010 movement that powers the Axiom is an impressive construction, conceived entirely by Mr Nourisson from scratch. It’s built with the regulator sitting on an elevated plate, and the gear train just below, which allows for two extremely large barrels that occupy a large part of the case interior. That in turn means a long, 100 hour power reserve, or four days worth.

Very few brands manage to build movements that are as three-dimensional as the watch case – MB&F is the only one that consistently manages it – so the PH-010 is quite an achievement for a startup. 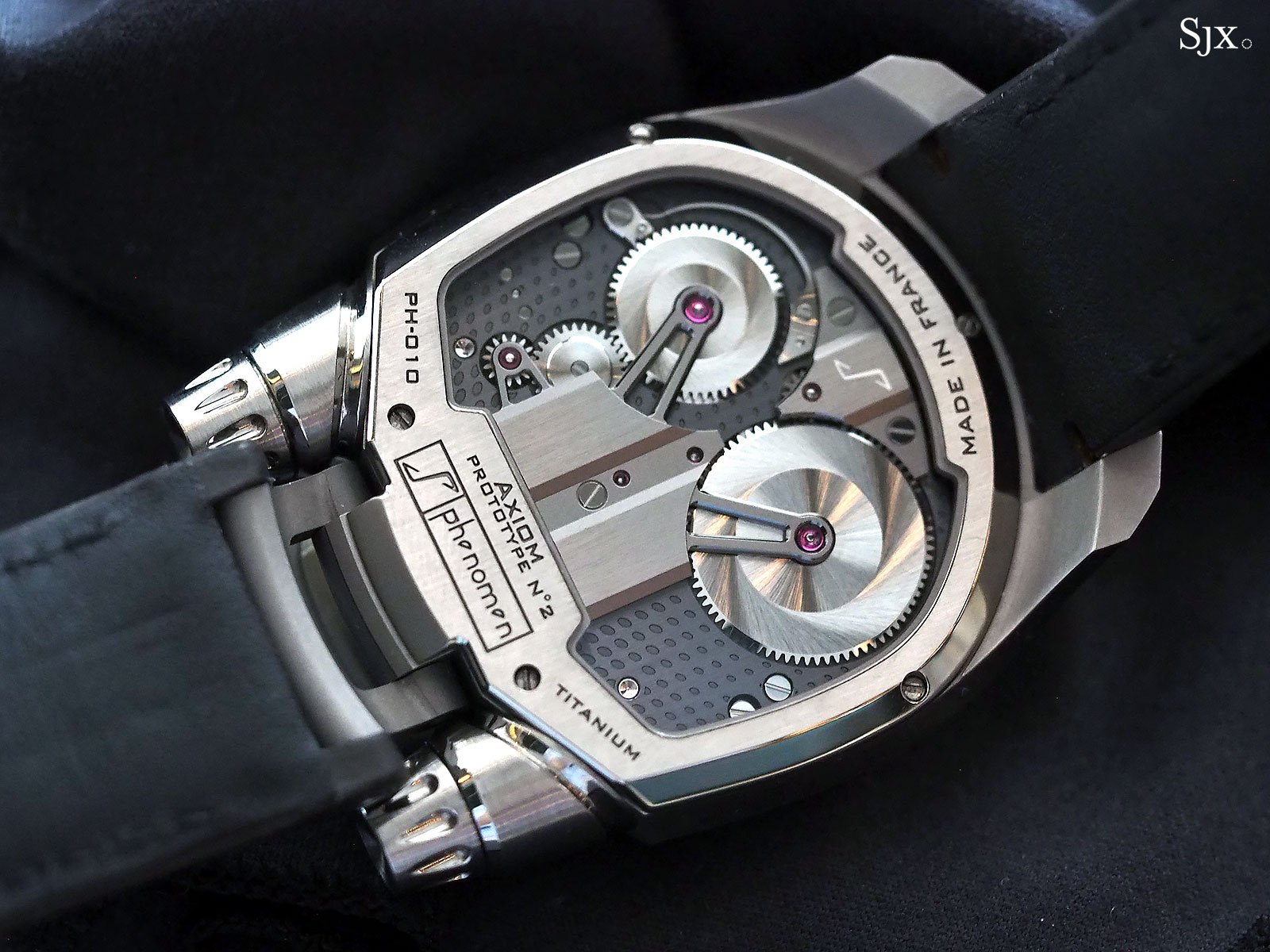 Ninety-five percent of the movement’s 267 parts were developed specifically for it, with most of the parts made by external specialists. But thanks to his experience at La Joux-Perret where he was head of the technical department, Mr Nourisson made the prototype of the PH-010 himself, using lathes, jigs and the CNC machine in the Phenomen workshop.

His background in movement construction means Mr Nourisson not only created an unconventional shape, but also endowed it with minute but important functional elements. That includes the variable inertia balance wheel custom made by Atokalpa, a sister company of Parmigiani, that has four weight gold adjustable masses. Mr Nourisson designed the balance wheel to maximise lightness, hence the breaks in its rim, which in turn minimises energy consumption of the balance across vertical and horizontal positions. 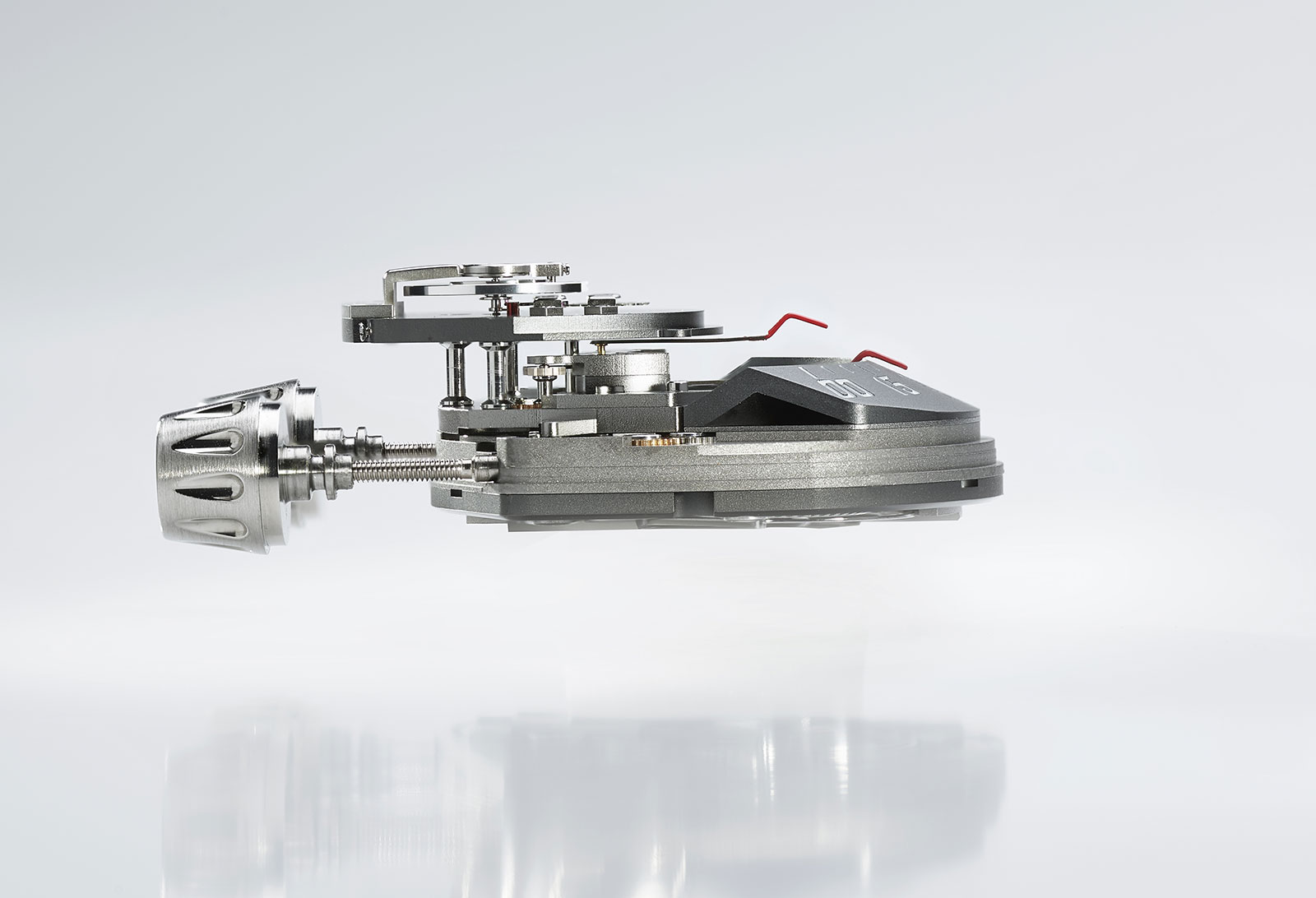 The adjustable mass balance at the very top. Photo – Phenomen

Mr Nourisson’s approach to the functionality of the movement is practical. An example are the independent hour and minute indicators, each is set by one of the two crowns. That makes changing time zones easier, while also reducing wear on the minute hand gearing since there is no need to cycling through the minutes to advance the hours.

And Mr Nourisson elected to used the tried and tested AgenEse jumping mechanism for the time display. It’s the invention of Geneva complications specialist Agenhor and already in used in several other jumping display movements.

Beyond the technical details, attention was also paid to the aesthetics of the movement. That holds true for the design, which is based on a car engine. But the movement still boasts proper, fine detailing and finishing. The barrel ratchet wheels are both finished with double solar graining, while the barrel cocks have anglage on their edges and countersinks. 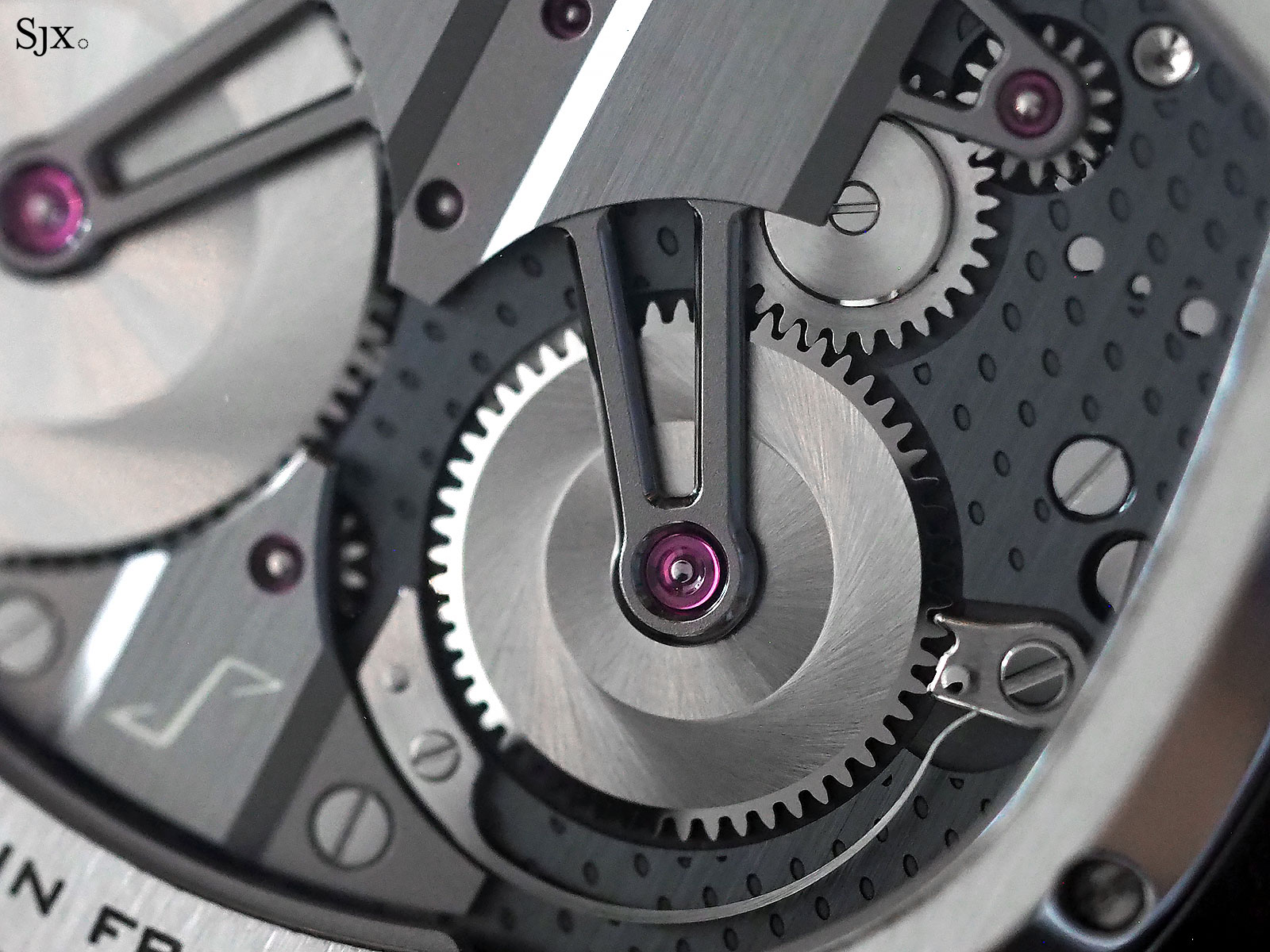 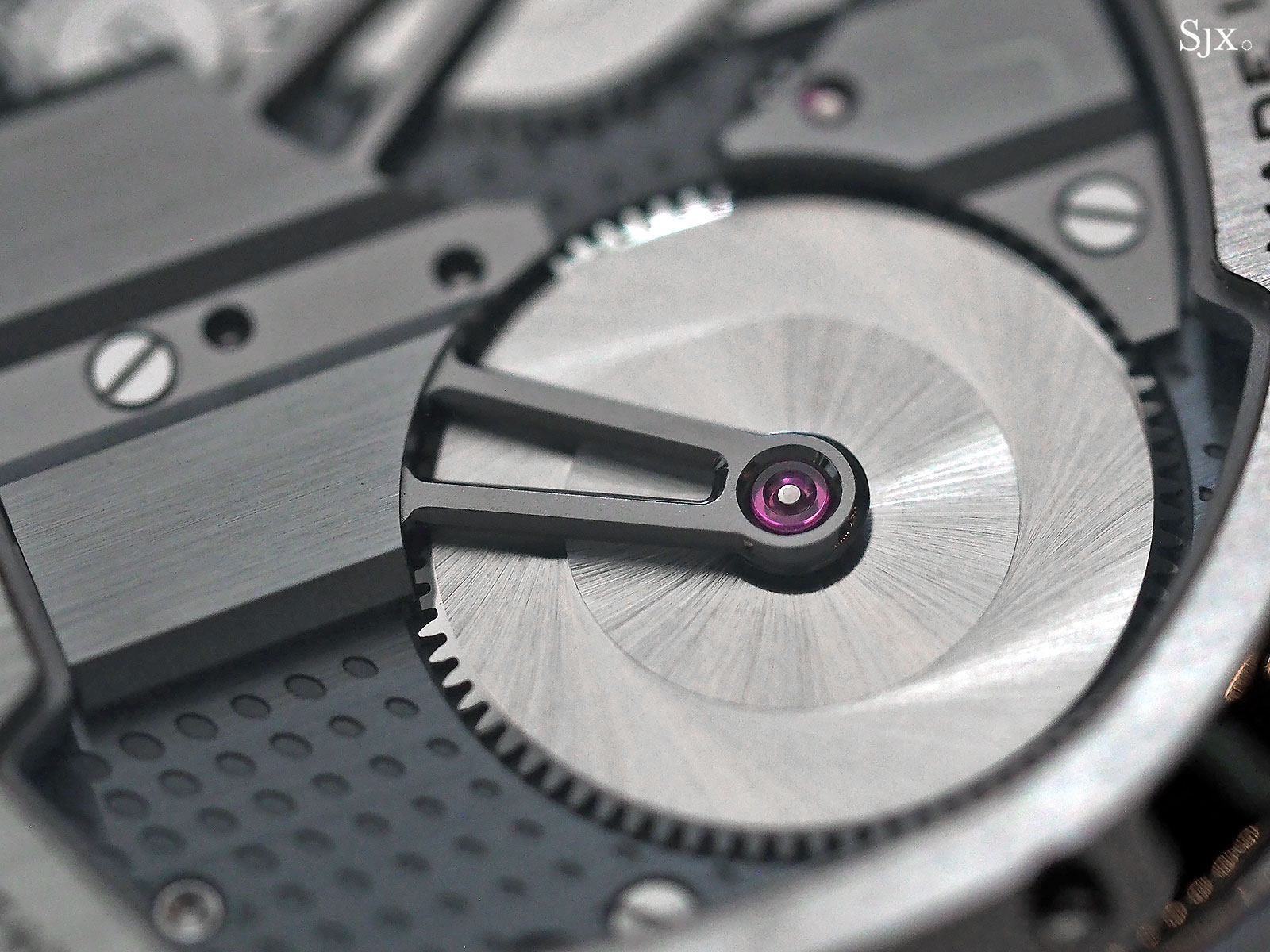 Beyond the movement itself, being an alumnus of La Joux-Perret gave Mr Nourisson valuable insight into what works in movement manufacturing. Delayed delivery of components is a normal occurrence for small scale watchmakers, so Mr Nourisson invested a good part of Phenomen’s capital in building an inventory of parts – the workshop has 40,000 components on hand – so that watches can be finished on time.

And Mr Nourisson’s experience also led him to understand the importance of quality control, especially for a startup like Phenomen. He personally ensures parts from suppliers are up to scratch; parts and movements are checked and tested for about 600 hours according to Mr Nourisson. Amongst the equipment used for quality control is an optical comparator that magnifies a component for visual comparison against a template.

In short, Mr Nourisson’s philosophy and experience means Phenomen has to put together a well executed product, while avoiding many of the pitfalls of a new watch brand. The Axiom in black-coated titanium

The Axiom is an admirable creation in both form, function, and detail, and as such things go, it is reasonably priced. The quality of execution is as good as that of a more established brand. Though the competition in this exotic category is stiff, the Axiom is one of the most compelling propositions.

And Mr Nourisson’s experience in the industry means the brand has a better than average chance of succeeding, especially since it already has a solid product. The only blot on the landscape is that fact that the two founders relied on external funding to start the company, which can lead to corporate turmoil; such a scenario is all too common in independent watch brands. 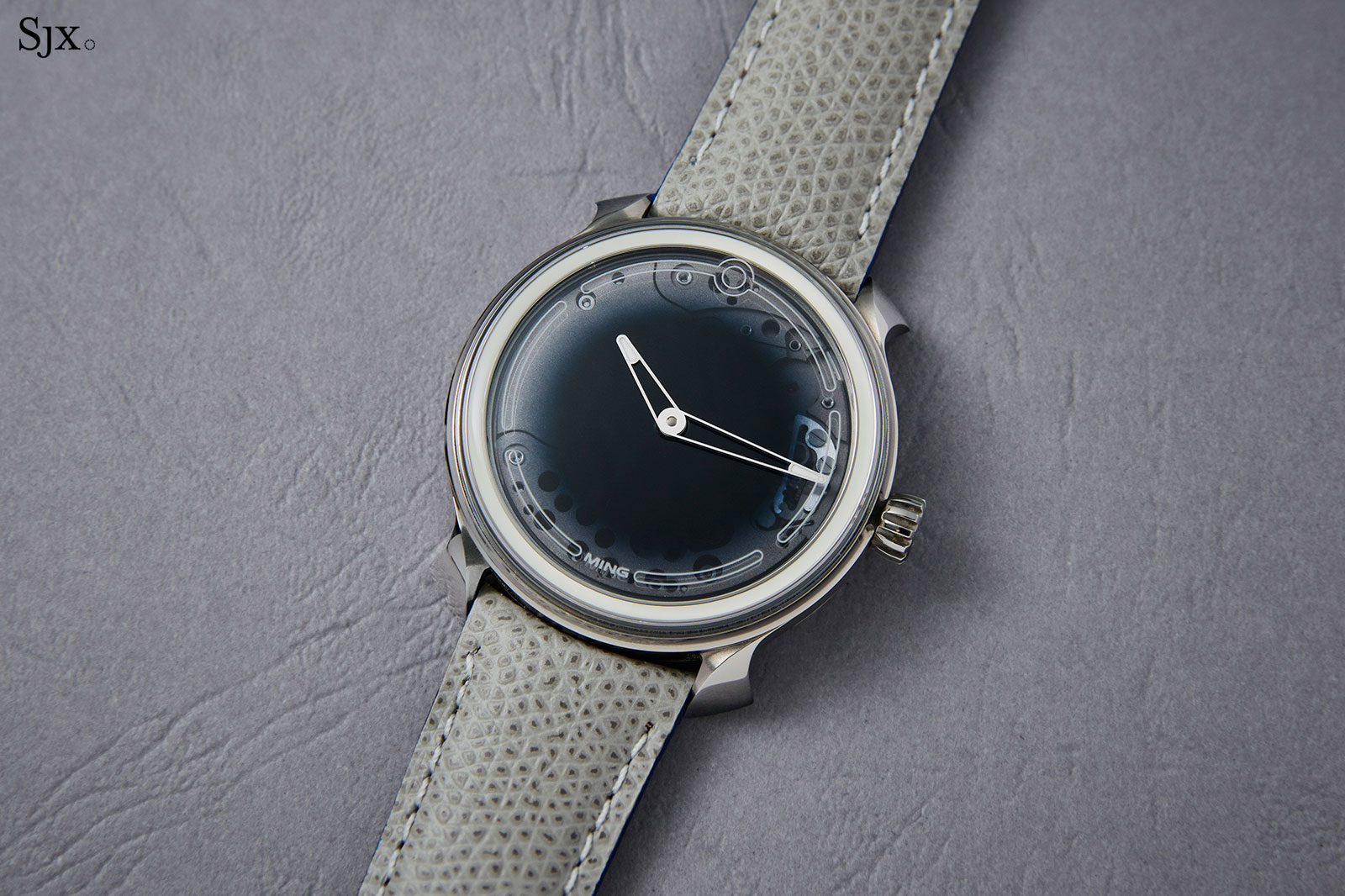 The Ming 19.01 is the base model in the 19 Series, which is the brand’s upscale line of watches (as compared to the affordable 17 Series). So it shares the same styling as the 19.02 Worldtimer, but is a time-only watch.

Though the 19.01 a compact and lightweight watch, it looks and feels like a quality product that very well on the wrist.

The case is 39mm in diameter and 10.9mm high. It feels compact, smaller than it actually is, which is an ideal quality for a watch designed to be useful and unobtrusive. A good part of the height is due to the highly domed sapphire crystal, explaining why although the watch is relatively thick (height relative to diameter), it does not look the part. In what is now the signature Ming dial, the sapphire dial is painted on the underside with a graduated black finish that dissipates towards the edges, leaving the hands floating in a black void. It’s a striking finish that works well with the busy dial of the 19.02 Worldtimer, but here it feels a bit naked at first glance. That, however, is alleviated by the segmented chapter ring engraved on the sapphire crystal.

Although the size is identical to the Worldtimer, the 19.01 is a lot more restrained on the wrist, because it has less visual contrast. While the Worldtimer has a rose gold-plated base plate visible on the edges of the dial, the movement in the 19.01 has a dark grey ruthenium finish. In short, I prefer the palette of the Worldtimer; the 19.01 feels a bit flat colour-wise. In the dark, however, the 19.01 is extremely striking (and legible) thanks to a bezel filled with Super-Luminova. It’s a simple but clever use of “lume” as a decorative element. Colours aside, the watch is attractive in its finishing, with the sharply twisted lugs finished in contrasting brushed and mirrored surfaces. It’s hand-wound, with twin barrels, and an impressive 100-hour power reserve, especially for a relatively compact watch. That’s largely due to the fact that the barrels are large, while the balance wheel is relatively small.

The long power reserve is a big plus – useful for a watch that is worn frequently, but not daily, which is usually the case if the owner is rotating amongst a small number of watches. It’s a good looking movement, finished in the brand’s house style. That means open-worked bridges and barrel covers to reveal the key bits of the movement, namely the wheel train and mainsprings.

The finishing is also typical Ming, with frosted top surfaces on the bridges as well as noticeable bevelling, including on the countersinks. Although the finishing is done industrially, it is one of the most attractively decorated in its price class. This watch pictured is a prototype, explaining the grimy movement, but the effort put into decoration is obvious. The only unattractive bit of the movement is the Etachron regulator, which is perfectly functional but common and aesthetically unsophisticated, but more expensive watches also use the same so it’s hardly a shortcoming.

The 17 Series watches were easy to appreciate, being well executed and extremely affordable. The 19.02 Worldtimer is far pricier, but still excellent value for money; it’s a strong contender in a relatively narrow segment.

The 19.01, on the other hand, is up against much stronger competition, since there are a lot more options in its category. While it is still strong value, the value proposition is not as great as for the Worldtimer or 17 Series.

Like all Ming watches the 19.01 is smartly conceived and well finished, but it will appeal best to someone who appreciates its details, thoughtfulness, and the fact that it’s not a Grand Seiko or Nomos or any of the other usual contenders.

The Ming 19.01 is priced at 7900 Swiss francs, or about US$7390. It’s available direct from Ming, with the first batch having been sold out and subsequent deliveries slated for the first quarter of 2020.

Up Close with the Ming 19.02 Worldtimer