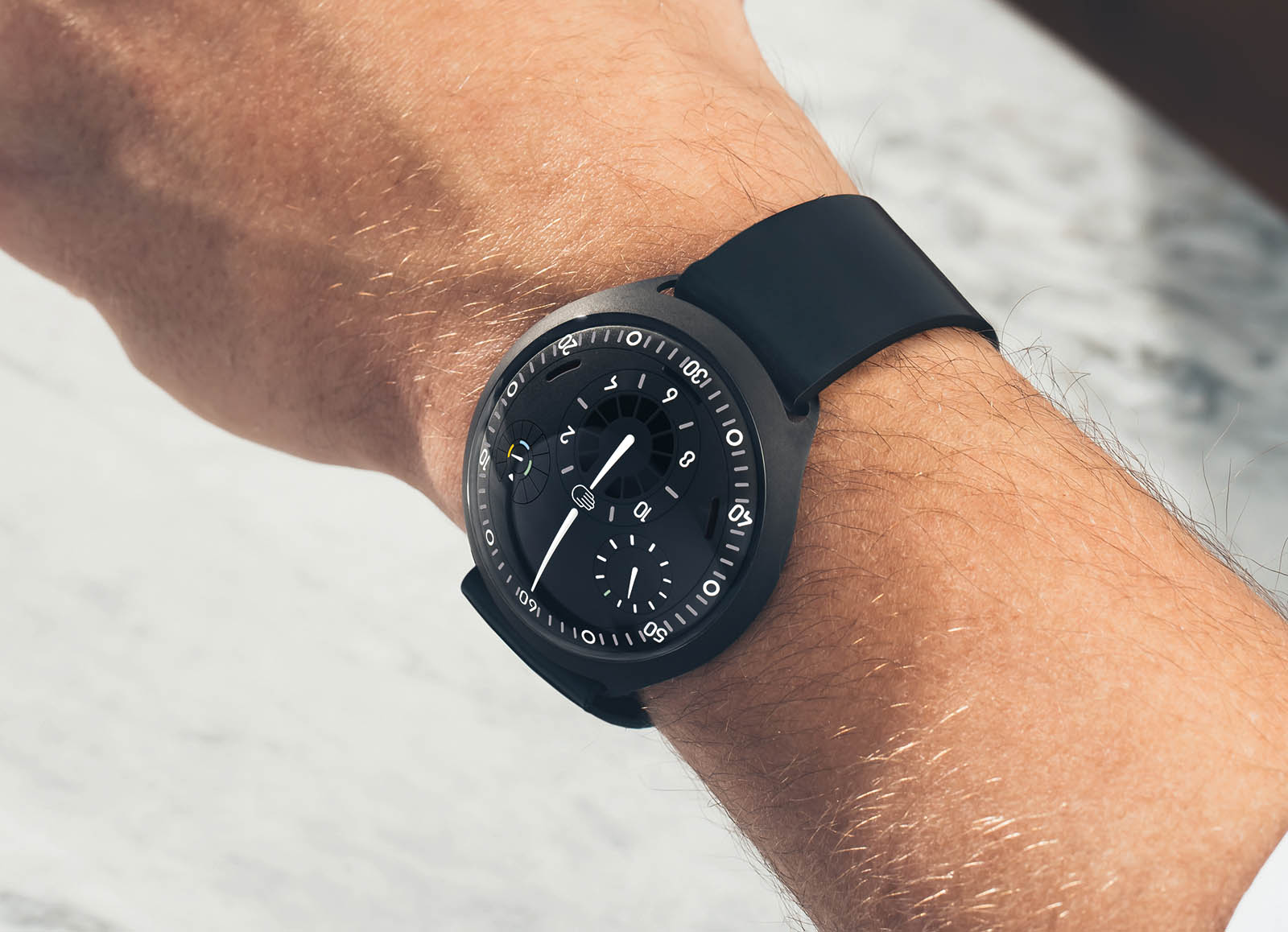 Just a few days before SIHH opens its doors in Geneva, Belgian watchmaker Ressence has unveiled the production version of the Type 2 e-Crown, first unveiled last year as a concept watch.

The watch is a genuinely original fusion of traditional watchmaking and wearable tech, developed in collaboration with Tony Fadell, a Silicon Valley luminary best known as one of the creators of the Apple iPod. Save for a few minor tweaks, the Type 2 boasts the same features and technology as the original concept watch. It incorporates an electro-mechanical module on a conventional mechanical ETA calibre, creating a watch that is capable of keeping time without any manual assistance. In fact, the ETA 2892 inside is the same as found in the Ressence Type 3 and Type 5 watches, with the electronic module being responsible for setting the time. The initial reference time for the Type 2 needs only to be done manually once, via a swivelling tab on the rear of the case. After that, the electronic component of the e-Crown takes care of everything.

Comprised of 87 components on a circuit board, the e-Crown checks the time displayed on the time at least once a day and adjusts it if necessary. While the watch is not running, the e-Crown is dormant.

The e-Crown relies on tactile control: double tapping the crystal awakens the electronic system, at which point it automatically resets the time display to the correct time regardless of how much time has passed since it went to sleep. A single tap controls the function selector, which is displayed on the coloured sub-dial on the front. The function selector in turn controls the four modes of operation – two separate time zones, e-Crown mode, and pure mechanical mode – an increase of one over the three in the first e-Crown concept watch.

e-Crown mode means the watch is paired via Bluetooth with a dedicated smartphone app, which allows the dual time zones to be set from the phone. In contrast, mechanical mode has the e-Crown function is disabled, leaving the watch to run the good old-fashioned way – entirely mechanically.

While the self-winding movement powers the watch’s time-telling function, the e-Crown itself is powered by a combination of kinetic and solar energy. A capacitor captures kinetic energy produced by the movement of the automatic rotor, but if stored power falls too low, there’s a backup: 10 micro-shutters on the hour sub-dial open to let in light to recharge the photovoltaic cells beneath. The Type 2 is also accompanied by a with light charger. Measuring 45mm in diameter, the case of the Type 2 is black-coated titanium, as is the dial. For time display, it relies on the brand’s trademark nested set of rotating, satellite discs driven by planetary gears below the dial, the Ressence Orbital Convex System (ROCS). At 12mm in height, the Type 2 is notably slimmer than previous Ressence watches due to its second-generation ROCS, which has its discs mounted on jewel micro-bearings and the space between the discs having been reduced to 35 microns, or 0.035mm.

The Ressence Type 2 is available in two dial colours: the Type 2A in anthracite, and the Type 2G in grey, both priced at SFr42,500 before taxes. That includes the light charger for the watch.