Among vintage military watches, some are more interesting and significant than others. They include the IWC Mark 11 and Rolex “Milsub”,  and also the early Type 20 chronographs made by Breguet for the French air force and navy in the 1950s.

Breguet has revived the first-generation, military-issue Type 20 for Only Watch 2019. The one of a kind remake is faithful not just in terms of dimensions and aesthetics, but also the movement. Instead of a modern calibre, it is powered by a refurbished, vintage Valjoux 235 movement, just like the original.

And a bit of nomenclature explanation before proceeding: “Type 20” refers to a French military specification for pilot’s chronographs, which refers to the original, military-issue watches. Watches produced for the civilian market, including the modern day models, are identified by the model name in Roman numerals – Type XX.

After WWII, Breguet was one of several watchmakers, including Mathey-Tissot, Airain, Vixa, Auricoste, and Dodane, that supplied Type 20 chronographs to the French Air Force and Naval Air Force.

While the actual Type 20 specification has been lost, the general consensus is that it called for a watch a prominent seconds track, a 38mm-ish case with a screw-in back and thickness of not more than 14mm, accuracy of within eight seconds a day, and most crucially, a flyback chronograph with a start-stop function that would work reliably at least 300 times.

These specifications were in turn derived from the pilot’s chronographs produced by Tutima and Hanhart for the Luftwaffe during the Second World War; the surplus of these watches were redirected to the French military post-war. 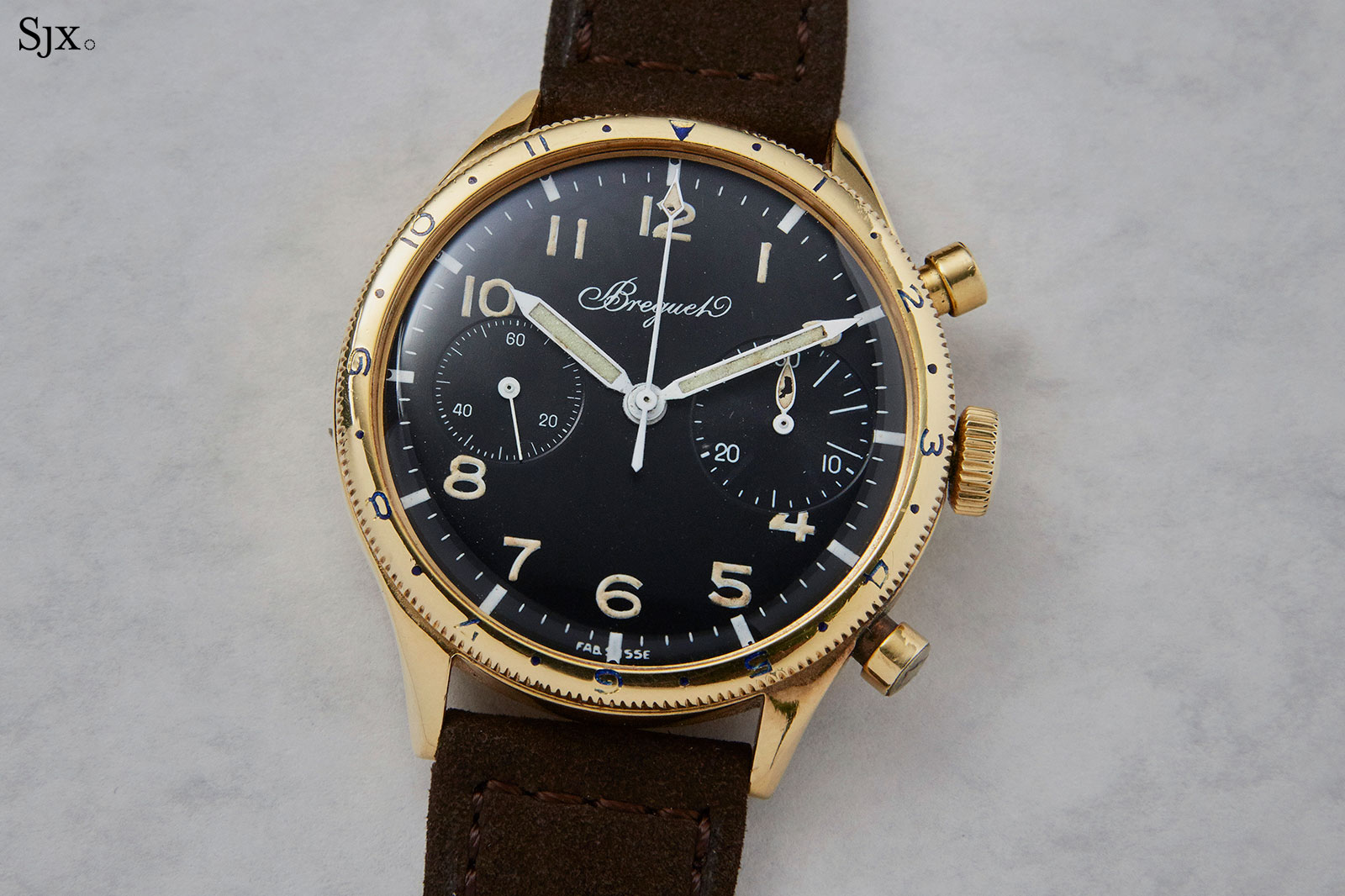 Approximately 2000 Type 20 chronographs were delivered by Breguet in the 1950s, but the actual production was subcontracted to Mathey-Tissot. The watches were equipped with a variety of Valjoux movements of the same family, namely the 222, 225, 235, and 720. 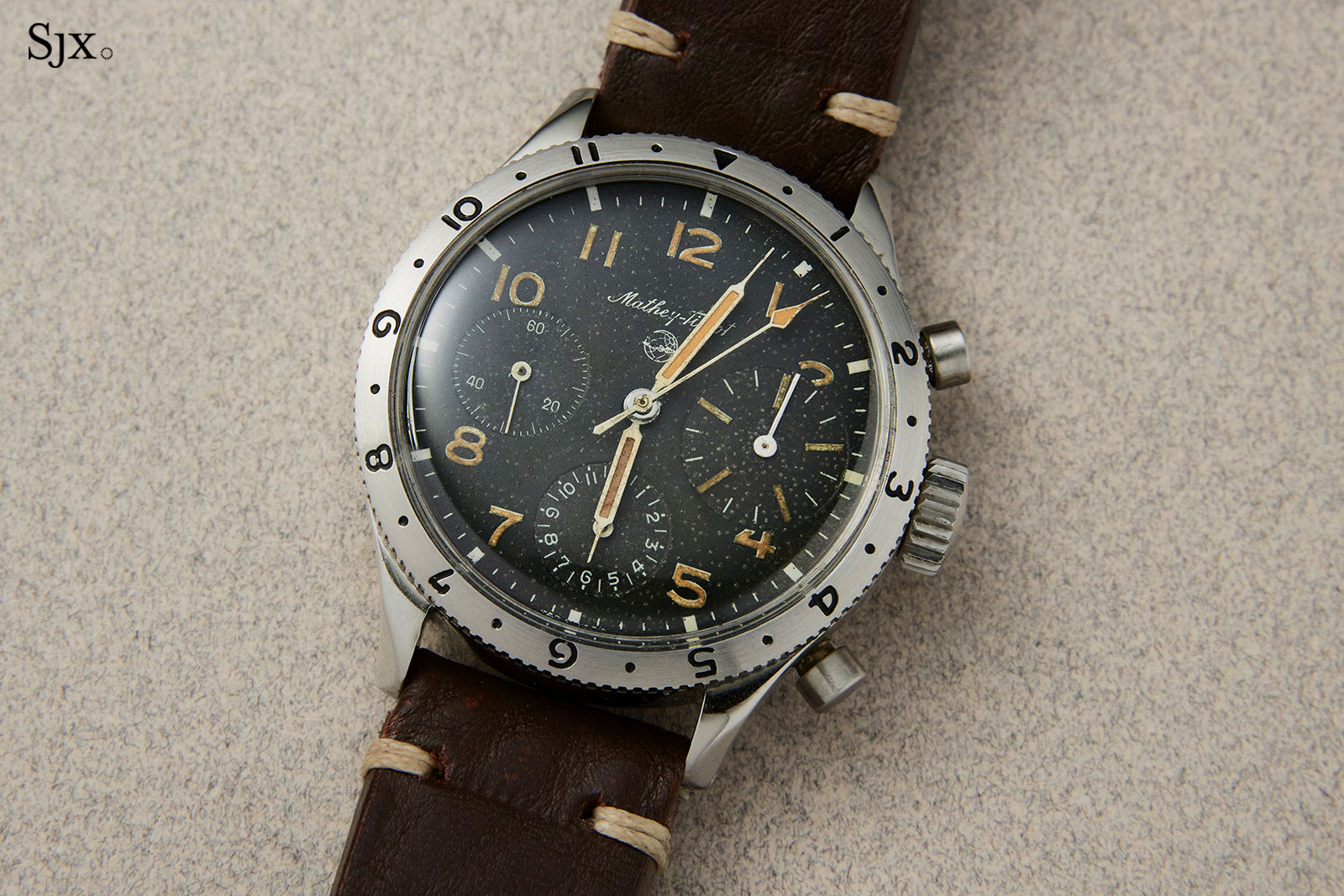 A Mathey-Tissot Type XX of the 1950s made for the civilian market; note the resemblance to Breguet Type XXs of the same period

The Type 20 “Only Watch” is a remake of a model produced for the French Air Force, distinguished by its 30-minute counter. But what really sets it apart is the brown “tropical” dial.

While all vintage Type 20s and XXs had black dials when new, a handful of dials faded to brown over time, as a result of exposure to sunlight. The “tropical” dial is matched with cream-coloured luminous hands and numerals. And it also replicates the propeller-shaped seconds hand.

The proportions of the watch are true to the originals – 38.3mm wide and 13.9mm high. The stainless steel case has a brushed finish on the case band and top of the lugs, as was characteristic of the first generation; the second generation had entirely polished cases. And like the original, the lugs have a prominent, polished bevel, and the crown is an oversized, “onion” type.

And notably, the Type 20 remake has a slim, unmarked, fluted bezel. Though the Type 20s were produced with a variety of bezels, including graduated or engraved types, the earlier models were characterised by an unmarked, reeded bezel. And in keeping with the original, the bezel is smoothly rotating and bidirectional.

The only concession to modernity is the Breguet signature on the dial. While the watches produced for the navy were signed, the ones made for the air force were unsigned, or “sterile”.

The Type 20 owes its faithful proportions to the restored, 13-lignes Valjoux 235 inside. It’s a hand-wound, column-wheel chronograph movement with a 45-hour power reserve and a frequency of 3Hz.

The 235 is derived from the slightly larger Valjoux 222, which was found inside the first generation Type 20.

Another appreciable decision was to have a solid case back. Unlike the modern-day, third-generation Type XX, which has an open caseback to showcase the automatic movement, the Valjoux 235 is hidden behind a screw-in steel case back, just like the original.