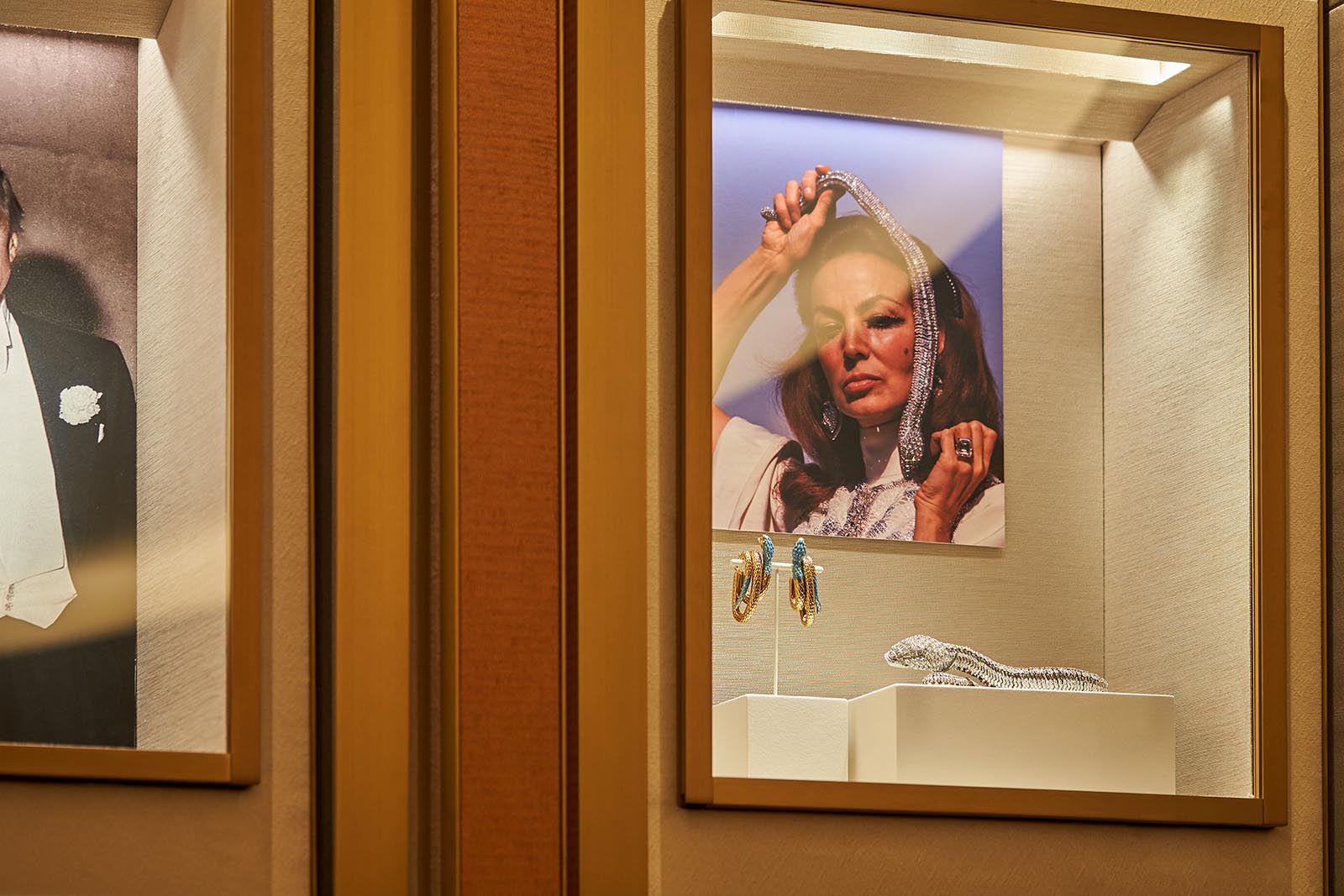 To celebrate the reopening of its boutique inside ION Orchard in Singapore, Cartier is staging a 13-day exhibition, Cartier, Icon of Style, which showcases a selection of jeweller’s most iconic and fascinating creations from throughout its 171-year-old history.

Located on the top floor of the flagship boutique, the exhibition consists of 23 pieces of jewellery from the Cartier Collection, the jeweller’s treasure trove of historical baubles, objects and timepieces.

With a value in the tens of millions, the jewels were flown in from Paris for the exhibition, fully insured, naturally. Beyond their value, all of the items on show tell a story, with most having been owned by celebrities or notable personalities.

The exhibition includes one of the jeweller’s wildest commissions, a 22-inch long snake necklace set with almost 2,500 diamonds that owned by the late María Félix, considered to be the most beautiful face in the history of Mexican cinema. Maria Felix and her snake Barbara Hutton and her tiger

Another highlight of the exhibition are the tiger-motif ear clips and brooch, finished in canary yellow diamonds and onyx, that once belonged to grocery store heiress Barbara Hutton, the “poor little rich girl”.

Another signature Cartier jewellery design that is part of the exhibition is the candy-coloured Tutti Frutti bracelet and brooch that were once owned by composer Cole Porter’s wife, the wealthy Linda Lee Thomas. But the exhibition also includes watches: a delicate wristwatch from 1914 with a platinum case set with diamonds and onyx to replicate the hide of a spotted panther, which represents Cartier’s very first use of the now familiar panthere motif that is a frequent sight in the exhibition. A double-headed panther bangle that once belonged to Nina Dyer, the French socialite famous for having married two fabulously rich men, Baron Heinrich von Thyssen and the Aga Khan

But the star of the show are perhaps the jewels made for the Duchess of Windsor, the former Wallis Simpson, who loved Cartier panther jewellery. They include a sumptuous platinum and gold bib necklace set with amethysts and spheres of turquoise, and a bodacious panther-shaped brooch that is essentially an enormous, 152.35 carat Kashmir sapphire. The Duchess and her necklace Cartier, Icon of Style taken place from November 24 to December 6, and is open daily from 12pm to 9pm Mondays to Fridays, and 10.30am to 9pm on weekends.

Admission is free but visitors are encouraged to register in advance at Cartier-ion.sg. 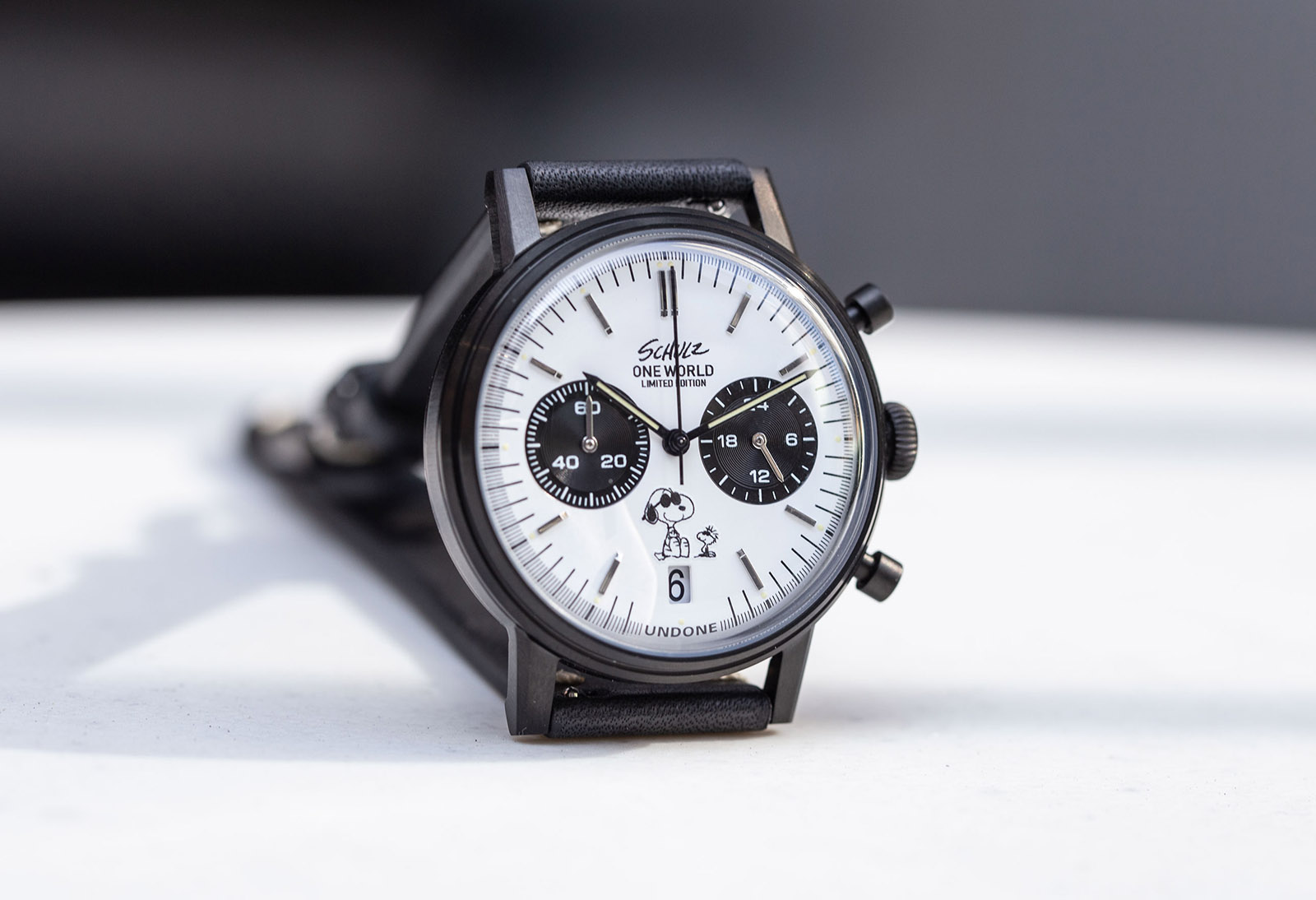 Hong Kong-based Undone Watches is best known for its affordable, retro-style chronographs, which have just gotten an injection of pop culture with the One World collection featuring Charles M. Shultz’s beloved Peanuts characters, from Charlie Brown to Snoopy.

Undone was founded four years ago by Michael Young, who is better known for his watch restoration workshop Classic Watch Repair. Using components sourced in Hong Kong and China, as well as Seiko “meca-quartz” movements (explained further down), Undone keeps its watches well below US$500.

The Urban One World collection sticks to the same formula, being made up of six watches, including a limited edition and a customisable model.

The collection is based on two basic case types – 41.5mm with a tachymeter bezel or 40mm with a stepped bezel. Both versions have the same case band, with the difference being the diameter of the bezel. The first four models, with each pair named after Hong Kong and Macau respectively, have tone on tone dials with the Peanuts motifs depicted in bold lines. They all feature a Peanuts character at nine o’clock, save for the black-coated Hong Kong edition that has Charlie Brown’s trademark zigzag t-shirt pattern across the orange dial. The customisable model offers a choice of options for the case, dial, hands and strap, as well as initials or a Peanuts character printed on the dial, resulting in a mind boggling number of possible iterations.

The characters available for the dial is all encompassing, from Charlie Brown’s archenemy Lucy van Pelt and her brother Linus, to piano-playing Schroeder, to Woodstock. Inside all five models is the Seiko VK61, a “meca-quartz” movement that is essentially a hybrid of mechanical and quartz. The movement has a quartz crystal regulator powered by a battery just like an ordinary quartz watch, but with the chronograph mechanism being a traditional mechanical sort with a levers, hammer and heart-cam reset mechanism. As a result, its tactile feel is not unlike a traditional mechanical chronograph.

The movement is partially visible below a sapphire back printed with all of the Peanuts crew. The final model in the collection is a 150-piece limited edition with a black-coated, 40mm case, stepped bezel and “panda” dial. It bears Charles Schulz’s signature at 12 o’clock, the only model in the line to have this flourish. It’s powered by another Seiko meca-quartz movement, the “bi-compax” VK64, which is hidden behind a solid caseback.

The Peanuts Urban ‘One World’ Chronographs start at US$330 for the Hong Kong or Macau editions, while the customisable version is US$360. The Charles Schulz limited edition is US$450. They are available direct from Undone.