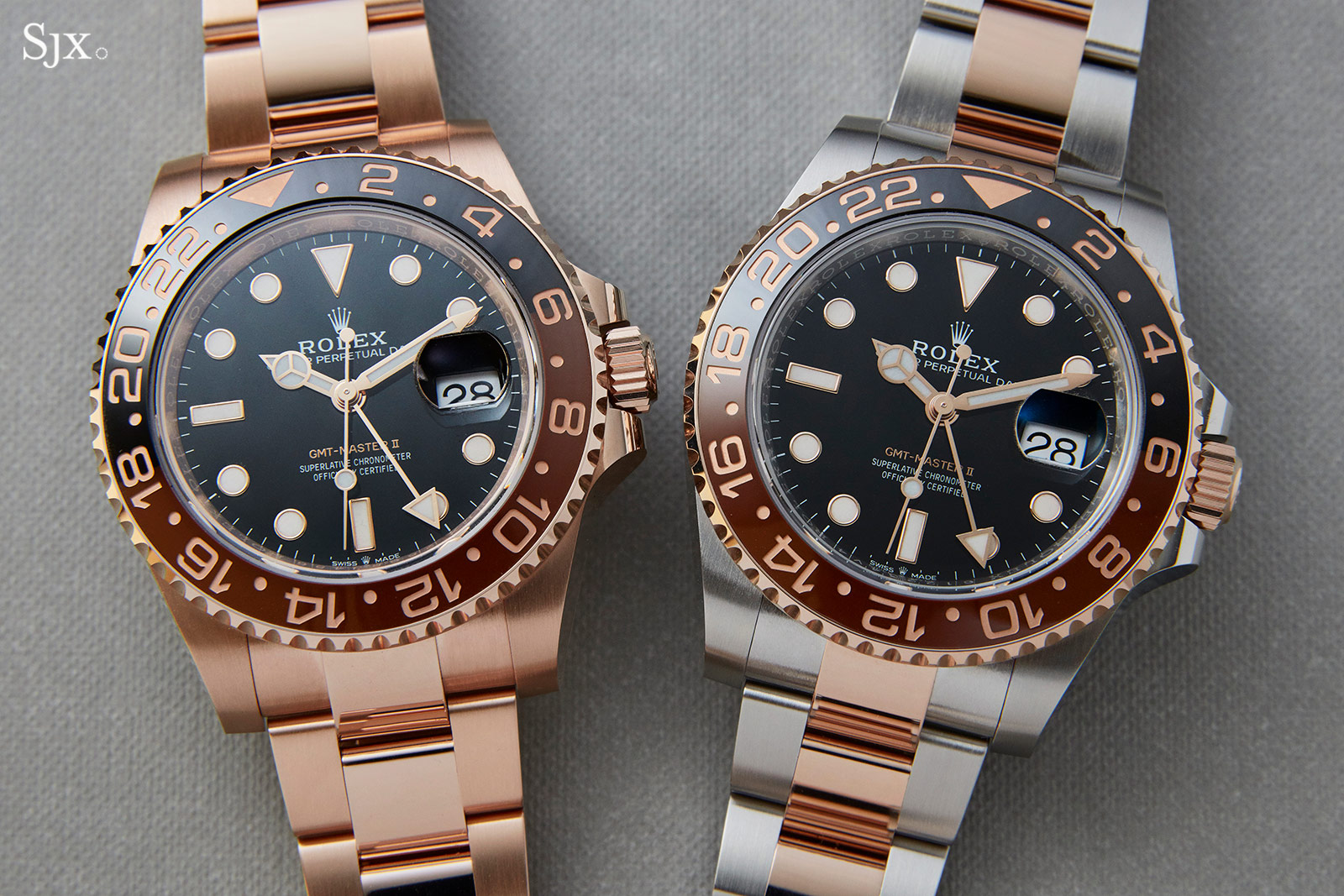 The headline Rolex this year was the GMT-Master II “Pepsi” in steel on a Jubilee bracelet, a watch both heavily lauded and hankered after. Yet in the metal, the “Pepsi” was patently upstaged – at least in terms of extravagance – by the two “Root Beers”, sepia-toned executions of the GMT-Master II.

Objectively described, the gold-and-brown duo are a niche alternative to the more classic steel version both in terms of price and appearance, but are so artfully executed they’re worth a second look. Both references are the first of the GMT-Master II in 18k Everose gold, Rolex’s proprietary formulation of rose gold that is fade-resistant thanks to a little platinum mixed inside.

The defining characteristic of any GMT-Master is its bezel; in fact, most GMT-Master variants were nicknamed after their bezel colours. And so it is the Everose bezel that makes the watch, on both of them.

Though they look different on the watches, the bezels on both models are identical: 24-hour, bidirectional bezels smartly executed in chocolate and black ceramic, to indicate day and night time respectively. The look is entirely new, yet reminiscent of gold or two-tone GMT-Masters from the late 20th century that had a distinctive brown and gold bezel to match caramel dials, giving rise to the “Root Beer” nickname.

The brown and black combination is a first in Cerachrom, the label Rolex applies to its ceramic bezel inserts. While the colours are new, the ceramic insert is produced in a similar fashion to those found in other models. The markings are first engraved and then the insert is plated with pink gold, before having its surface polished to remove the layer on gold on top, but leaving the plating inside the engraved markings. Ironically an exercise in subtlety despite the liberal use of gold, the twin colours of the bezel lack contrast, so falls short of maximum legibility but the overall result is fetching and measuredly muted, particularly in the all Everose model, which seems more rosy and brown than gold. The Rolesor model, however, isn’t far behind. In fact, it looks more striking with the contrast between the Everose and steel. The gold bezel, crown and hour markers play off the flash of gold on the centre links of the bracelet brilliantly, much like the original “Root Beer” GMTs that were typically two-tone, lending it a luxurious yet sporty feel. Like the bezel, the dials on both are identical, black matched with gold hour markers and hands, along with “GMT-Master II” in rose gilt print. The case remains the same 40mm as the older GMT-Master models, except with slightly more tapered lugs, while water-resistance stays the same at 100m. Both are fitted to Oyster bracelets with polished centre links flanked by brushed outer links. The bracelet has an Oysterlock folding safety clasp and features the Easylink rapid extension system that seamlessly expands by 5mm, making it one of the most functional bracelet and clasp combinations on the market. Cosmetics aside, the biggest improvement in the Everose GMT-Masters (and also the steel version on Jubilee) is the upgraded, latest generation cal. 3285 inside. That’s signified by the tiny coronet in between “Swiss” and “Made” at six o’clock, now found on all Rolex watches with the latest movements. The movement boasts all the latest bells and whistles Rolex has developed – 10 patents in all – which it has gradually been installing across the model lines. That means a 70-hour power reserve, thanks to an improved barrel design, and the Chronergy escapement, essentially an improved version of the Swiss lever escapement with a redesigned, lighter escape wheel.