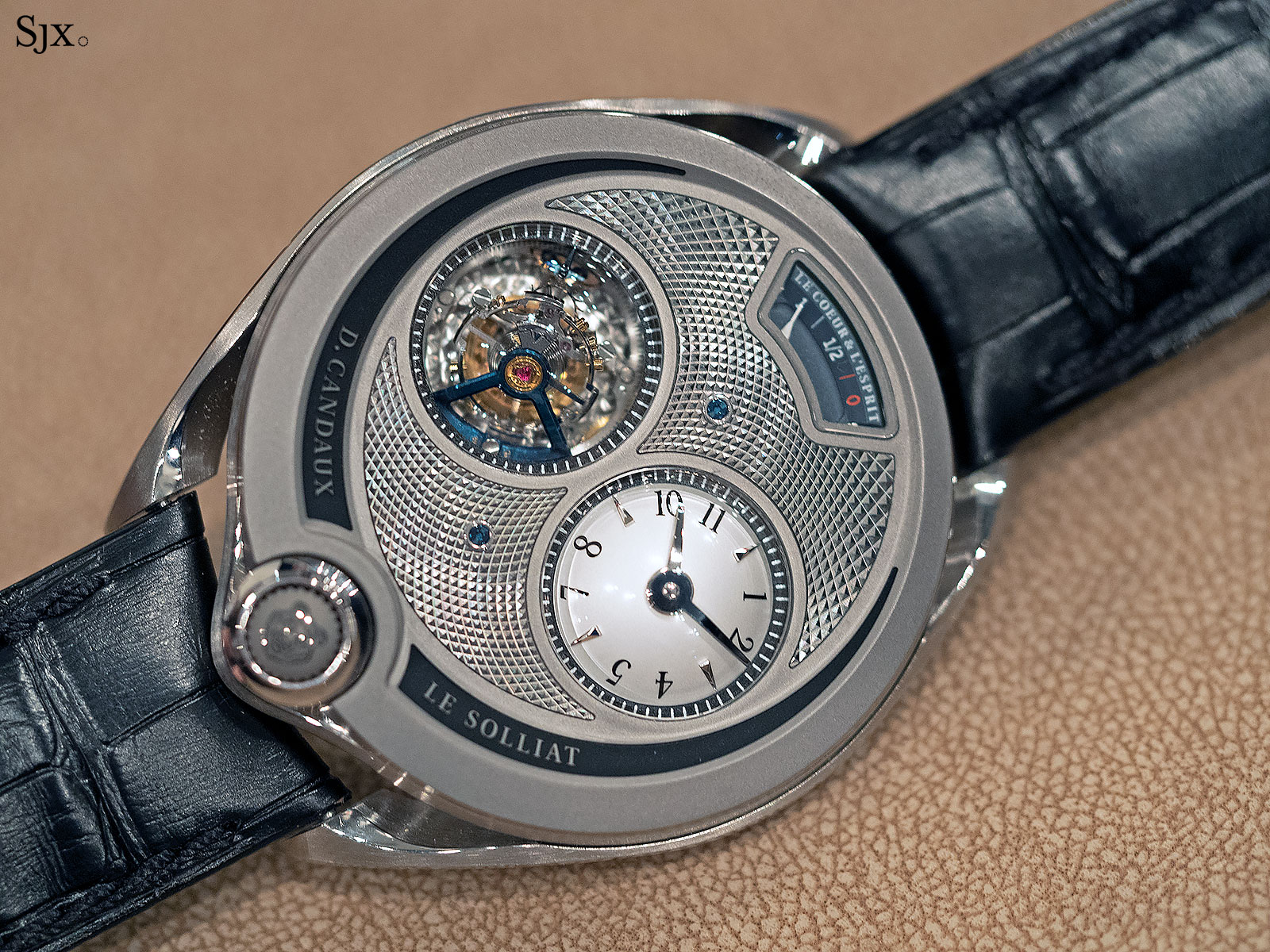 Best known for having spent nearly 20 years as a constructor at Jaeger-LeCoultre, David Candaux is a watchmaker whose current creation is heavy in historical references. The 1740 wristwatch is named after the year a watchmaker (named, what else, but Meylan) first set up shop in the Vallée de Joux, the historical centre of movement and component production. It is also where Mr Candaux was born, the third generation in a family of watchmakers.

Despite all of that the watch is a thoroughly modern creation. It’s an unusual watch with unusual details that nevertheless manages to incorporate elements and techniques of traditional watchmaking.

The 1740 Half Hunter is the second iteration of the 1740, being the first in titanium. The lightweight case alloy, along with the redesigned, slightly open-worked lugs, make this the most contemporary of all the variations. The lugs are a particularly elegant detail

Titanium works well because the 1740 is a largish watch, with a diameter of 43mm and slightly longer vertically. It’s also 12.6mm thick, though the measurement is deceiving as the case is slightly inclined – higher at 12 o’clock and gently sloping downwards – due to the inventive movement construction. The most unusual is the telescopic, retractable crown at six o’clock. Gently pressing it inwards causes it to pop out, allowing for winding and setting. It’s set at a slightly angle to the plane of the movement.

The inclined plane continues on the movement itself, with each of the horizontally positioned bridges sitting slightly higher than the other in a stepped formation, with the bridge at 12 o’clock being the most elevated. In fact, the bridges, wheel train and gears are inclined at 3° from the horizontal; they are all on the same plane and inclined at the same angle. Over on the front, the dial is covered in an hobnail guilloche plate made of 18k white gold. The time is at three o’clock, the tourbillon at nine – both under sapphire crystal bubbles – and the power reserve at 12. Conceived to cope with gravitational errors due to the constantly changing position of the wearer’s wrist, the inclined tourbillon is not a new idea, having been executed by Greubel Forsey as the most prominent proponent. It is particularly striking in the 1740 though, with the blue-coated titanium cage rising up from the dial. Upon close examination the balance wheel reveals itself as eminently traditional, featuring adjustable gold masses and a hairspring with a Breguet overcoil and Phillips terminal curve.

To the right of the tourbillon is a domed dial with curved hands, mirroring the shape of the tourbillon. The hands, naturally, are blued and polished by hand. And the 55-hour power reserve is indicated in a fan-shaped aperture at high noon via a pointer in 18k white gold, the same material used for the centre seconds hand.

All of the mechanics sit on a titanium base plate that have the specifications of the movement laser etched in relief on its side, tiny script that is invisible to anyone but the watchmaker taking apart the watch, meant to be a message to future watchmakers explaining how to service the watch.

The stepped bridges are also made of titanium, and finished with Côtes du Solliat, a variation on Geneva striping invented by Mr Candaux. While conventional Côtes de Geneve are narrow stripes equally spaced, Côtes du Solliat relies on wide stripes that are widely spaced, creating the optical effect of each stripe being comprised of several sub-stripes. Perhaps because of the hardness of titanium compared to traditional German silver or brass, the striping does not seem quite as pronounced. The rest of the movement is equally elaborately finished, including polished and chamfered inward angles on the bridges, black polished screw heads and bridges, as well as gold chatons for some jewels. It is obvious thought has been put into giving the movement decoration that is both elaborate and visually striking.

Equal effort has been put into finishing the case, which has alternating brushed and mirror polished surfaces. The gently curved lugs are its most beautiful feature, appearing almost as rails supporting the “bassinet” case.