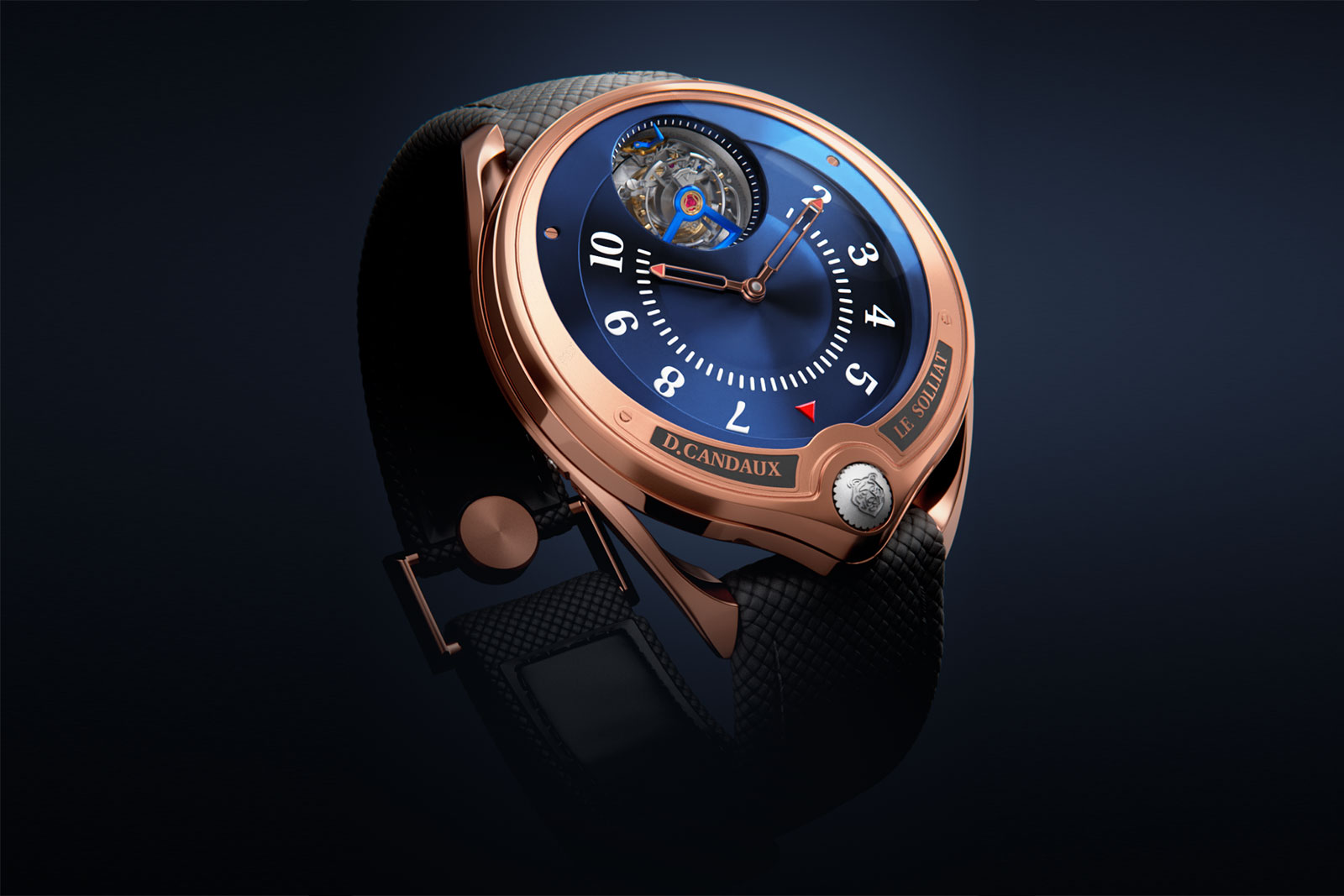 David Candaux established his eponymous brand with the 1740 Half Hunter, a watch with several exotic features that made it decidedly unconventional, especially for a watchmaker located in the traditional heart of Swiss watchmaking, the village of Le Solliat in the Vallee de Joux.

Now Mr Candaux is following up with something more concise, the DC7 Genesis. The DC7 still preserves many of the novel elements of the original model – like the inclined-balance tourbillon – but presents them in a streamlined manner. 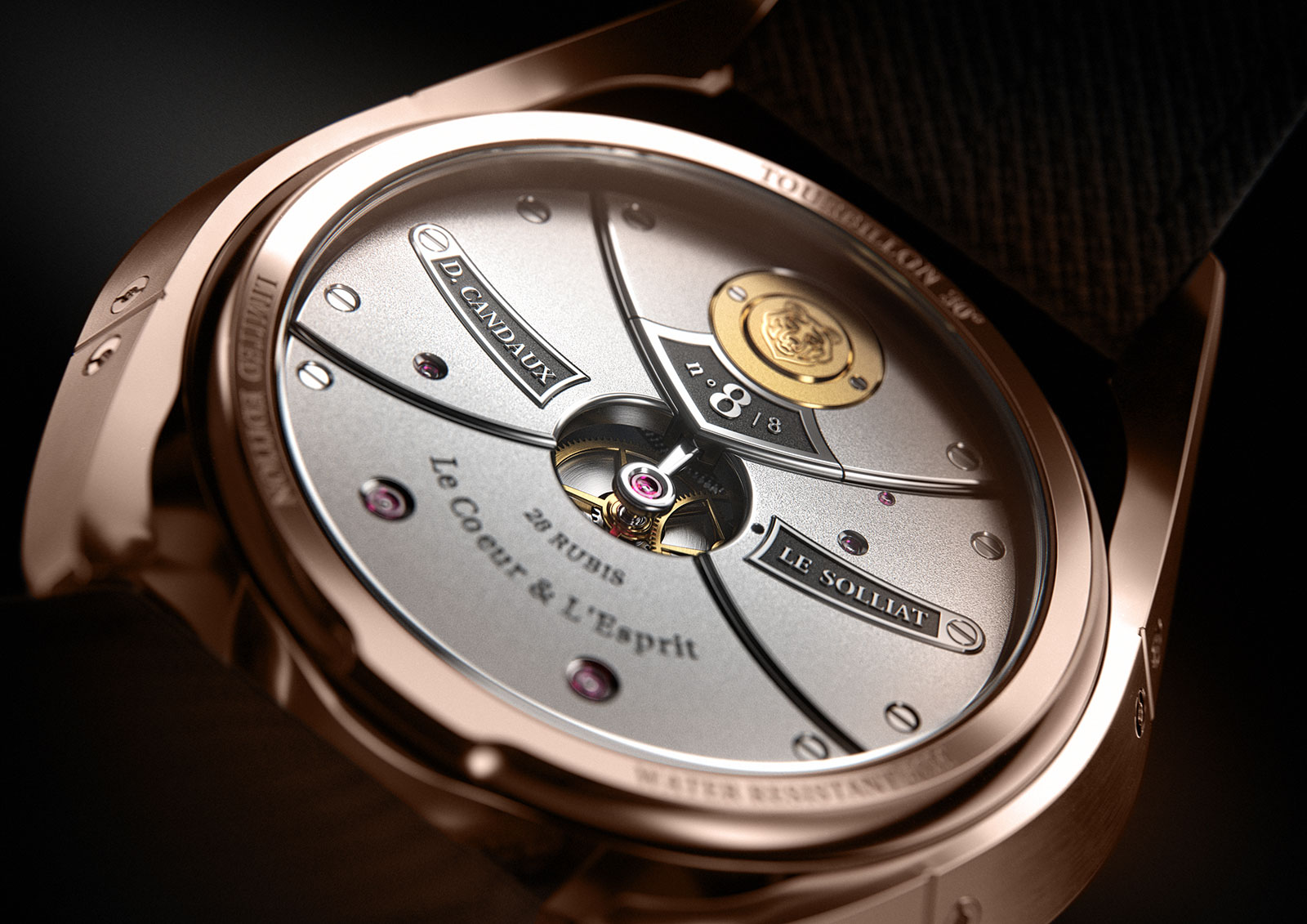 For someone who appreciated the technical merits of David Candaux’s first wristwatch, but found it too fancy, the DC7 is ideal. The DC7 remains unusual in both design and construction, but inches closer to the conventional end of the scale.

The cleaner and simpler design make the DC7 easier to digest. Though streamlined, the DC7 still retains the watchmaker’s signature features, including the vertically-symmetrical case, telescopic crown, and inclined-balance tourbillon.

More broadly, the watch is composed of inclined surfaces – the dial and movement bridges are both inclined, making it instantly recognisable as a David Candaux creation.

At the same time, the movement is finished differently from the original model, and slightly less intricate, but still appears to be done to a similarly high standard. 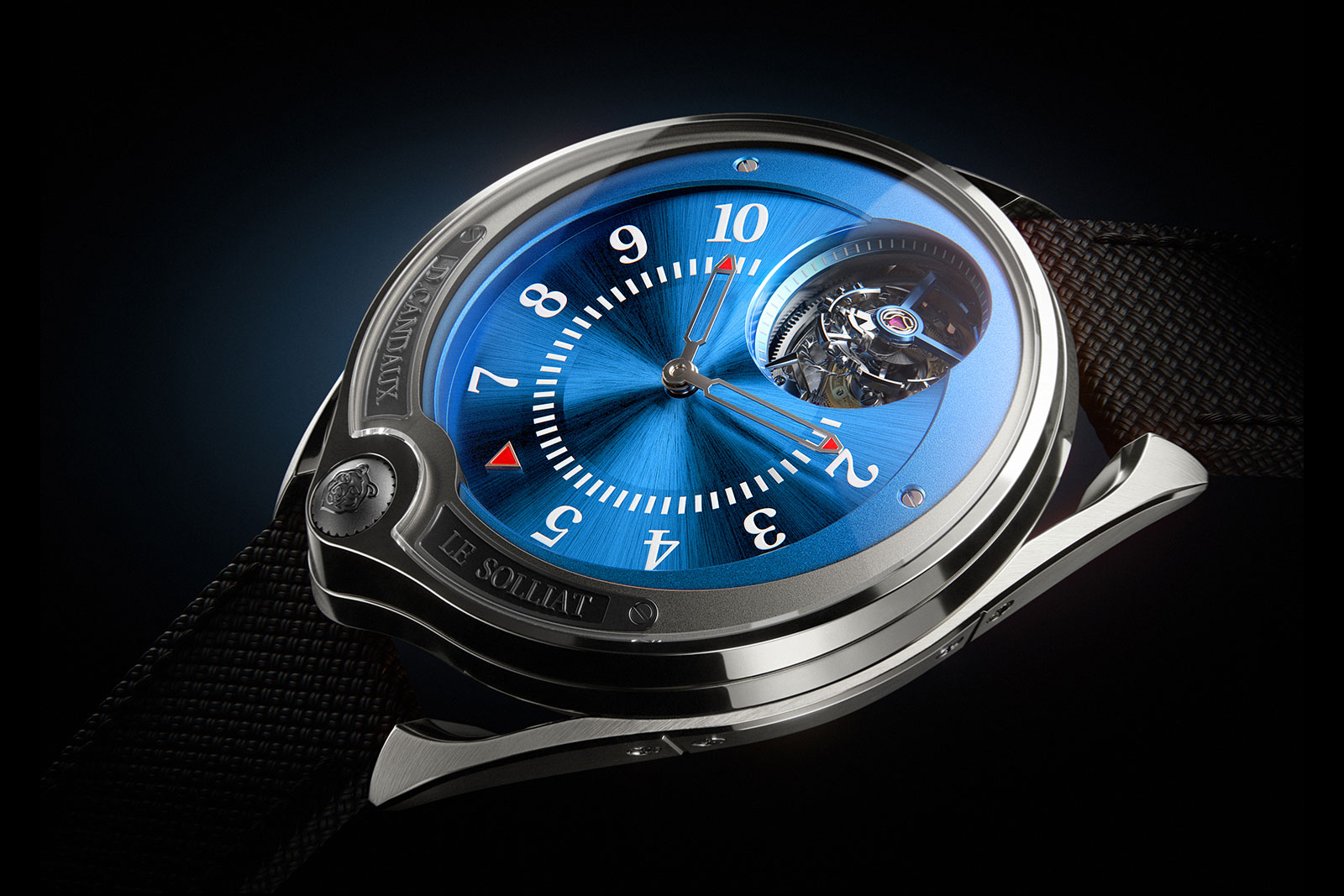 Importantly, the simpler mechanics make it more affordable. At about US$150,000 in titanium, the DC7 is not quite a value buy, but it’s half as expensive as the 1740 Half Hunter.

And lastly, the DC7 retains the outline of the 1740, it is both wider and thicker. But given that the 1740 felt smaller on the wrist than it measured thanks to the arched case profile, the DC7 will probably sit fairly well.

Occupying the 12 o’clock spot on the dial is the “biplanar” tourbillon. It’s a single-axis, one-minute flying tourbillon, but subtly inclined on two planes.

The tourbillon cage is gently inclined at three degrees relative to the plane of the case, while the balance wheel within the cage is inclined at a steeper 30 degrees.

According to Mr Candaux, the inclination affords better compensation for gravitational errors in the motion of the balance. 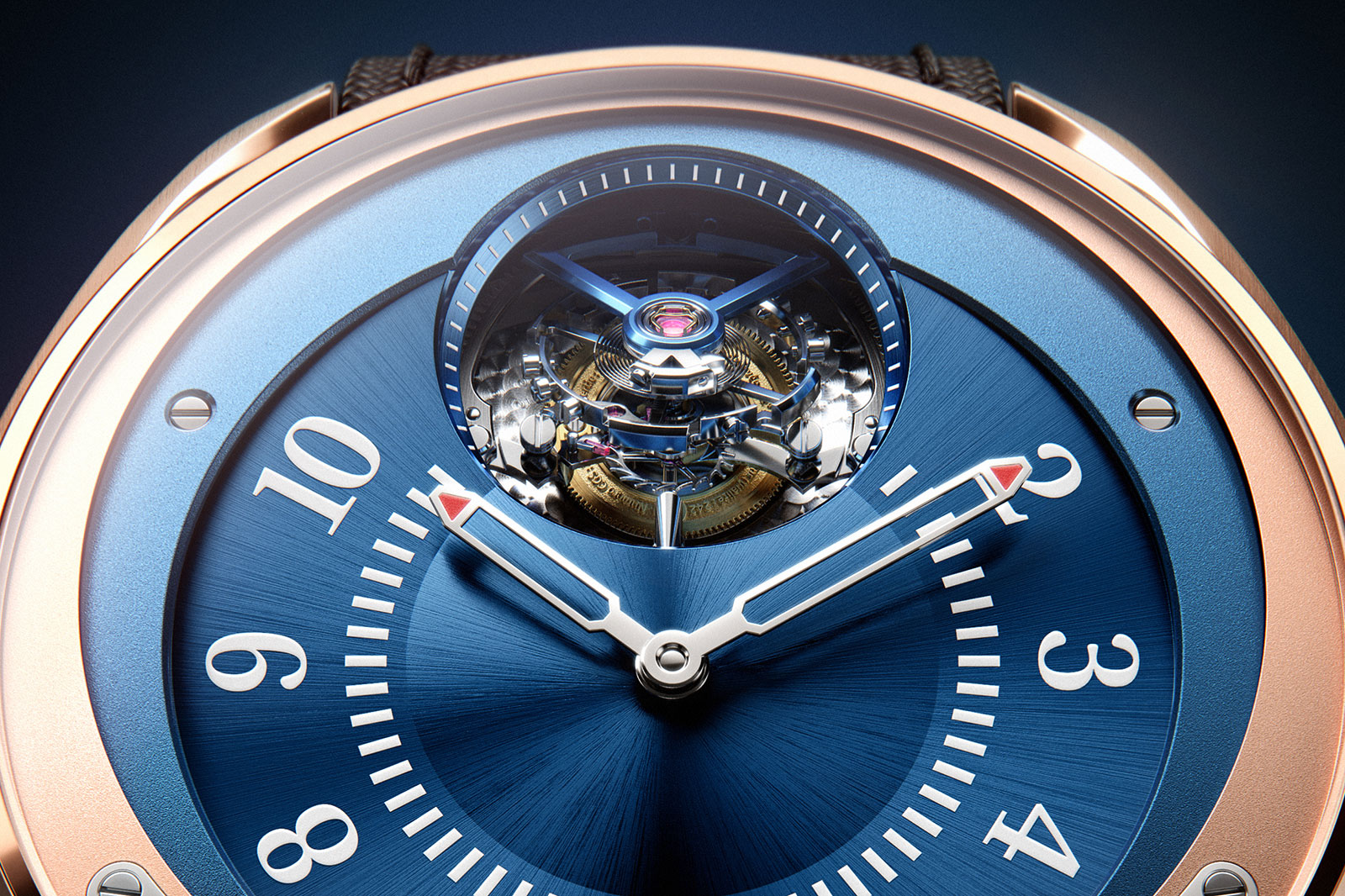 Like the cage, the dial is similarly inclined at three degrees to the case, which is meant to improve legibility by tilting the dial towards the wearer. Incline aside, the DC7 is easily readable: unlike the 1740 that had a small sub-dial for the time, the DC7 tells the time on a full dial with large, luminous Arabic numerals.

And just below six o’clock sits the telescopic crown – push it in and the crown pops out for winding and setting. 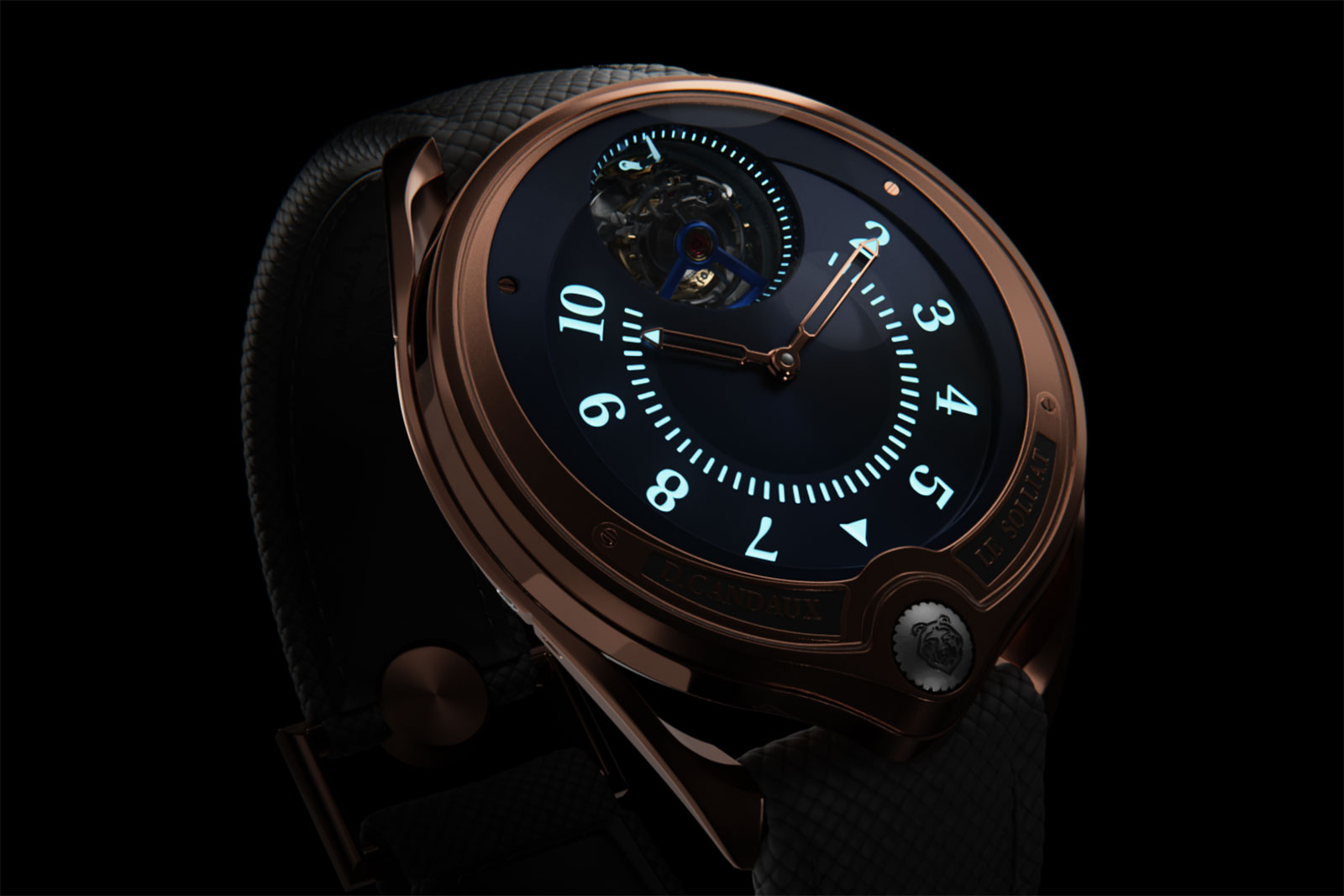 Like the dial, the cal. 1700 within is symmetrical vertically, or at least very nearly symmetrical, save for a few jewels.

As with the 1740 movement, the bridges are made entirely of titanium, and finished by hand. The frosted surfaces are accomplished with a Turkish oilstone, a whetstone traditionally used for sharpening blades. According to Mr Candaux, this technique is being applied for the first time in watchmaking.

The edges of the bridges are all rounded and mirror polished, but made especially challenging due to the curved outlines of the bridges, which demand even more consistent and even bevelling than usual. 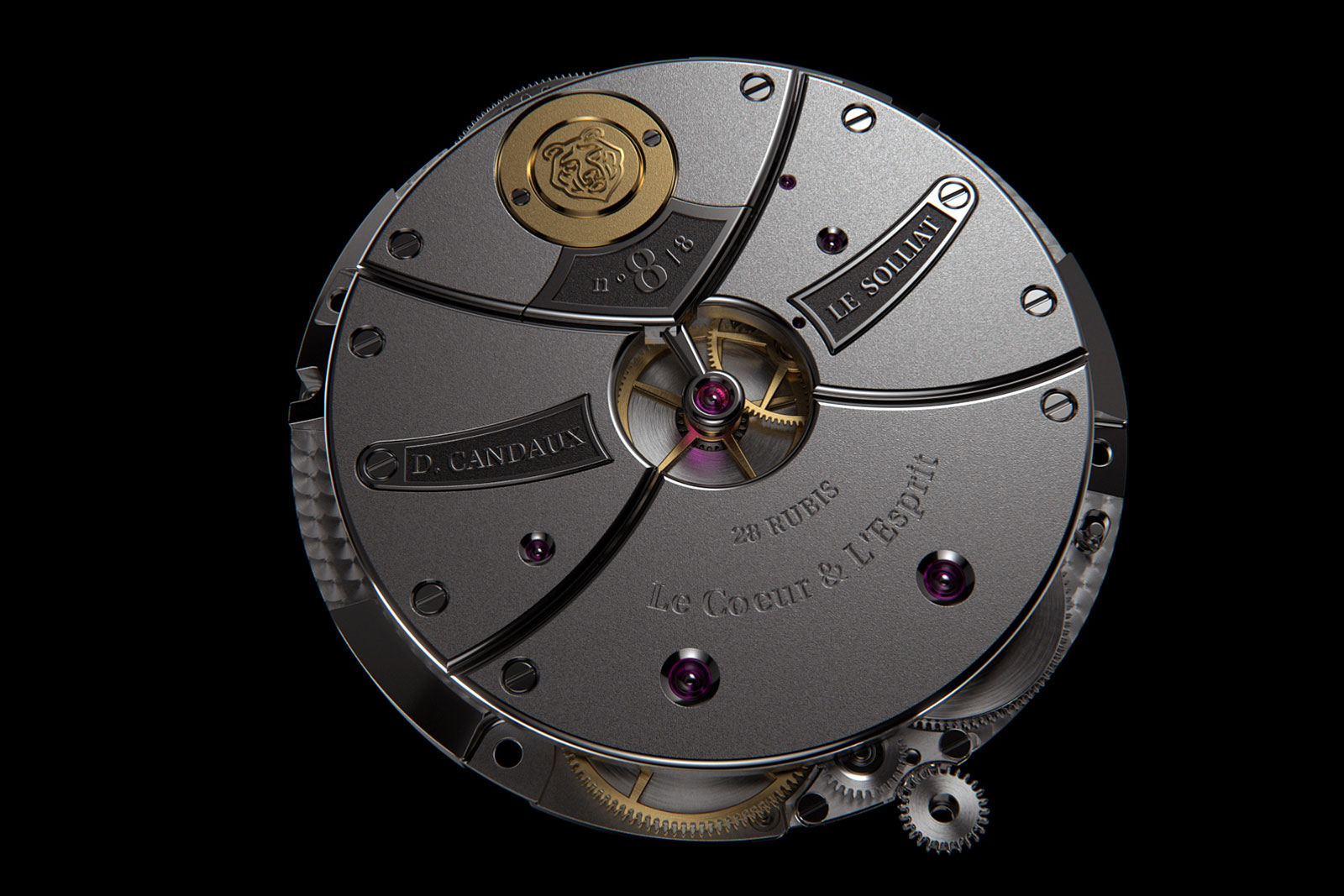 The centre wheel is secured by a rounded, polished steel cock

Hands-On with the David Candaux 1740 Half Hunter

A unusual watch from the traditional heart of watchmaking.