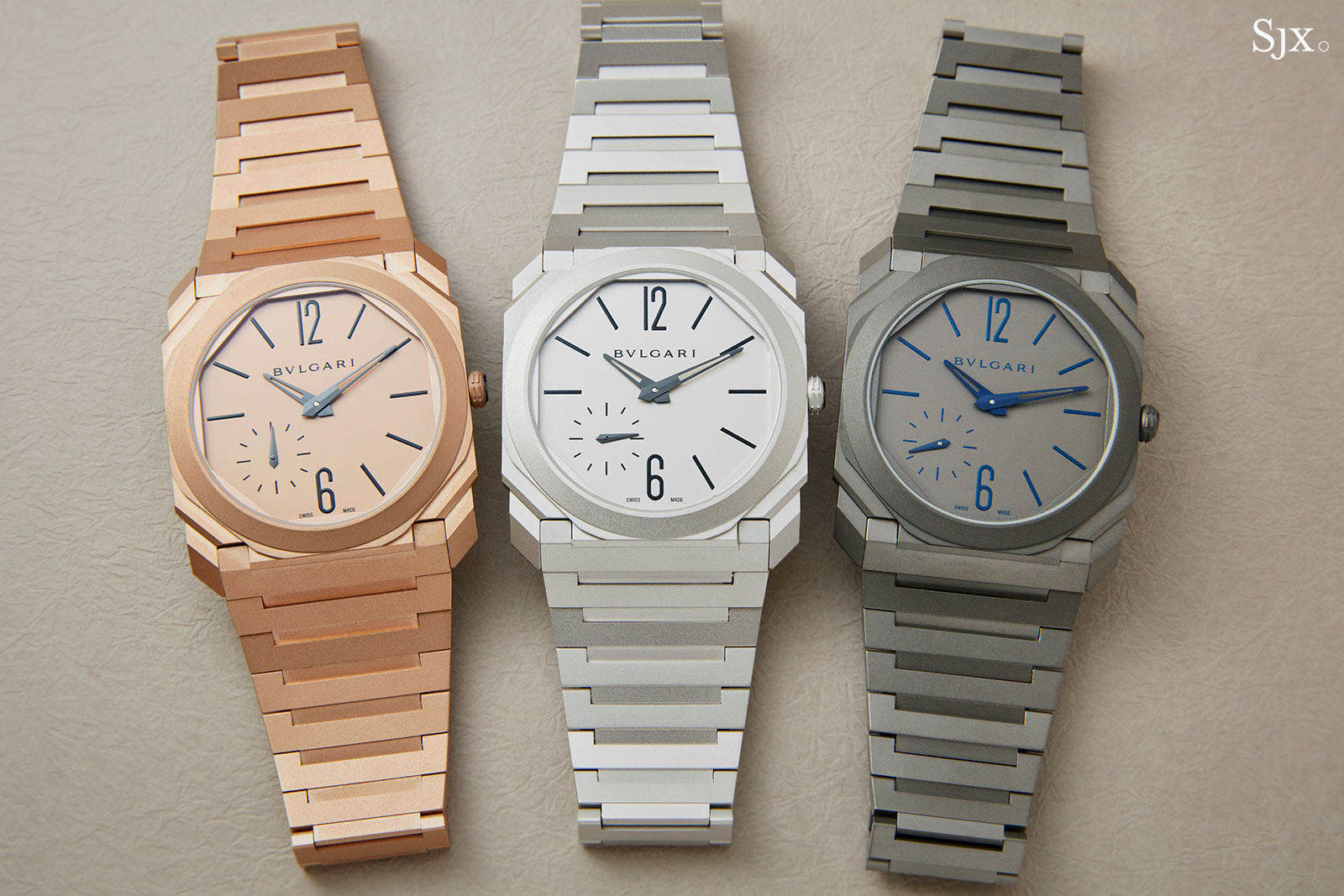 In essence, the Bulgari Octo Finissimo Automatic is the second reboot of a design concept – and it is a home run.

The original Octo was introduced in the early 2000s, when Gerald Genta was still a standalone company, before it was integrated into parent company Bulgari. It was inspired by the works of Mr Gerald Genta, one of the most successful watch designers ever. The late Mr Genta’s smash hits were the properly octagonal Audemars Piguet Royal Oak and octagonal-ish Patek Philippe Nautilus.

As originally conceived the Octo was a largish and hefty watch, with most being 45mm in diameter and complicated. In fact, the Octo line included a million dollar grande et petite sonnerie carillon with Westminster chime. The Octo Finissimo is the second reboot of the octagonal styling, stripped of complications and excess weight, proving the Octo case can take on a whole new life with a bit of weight loss. Proof that less is more, the Octo Finissimo is deliciously thin and wonderfully elegant. Traditionalists will say it’s heresy, but the Octo Finissimo feels like a watch in the vein of the original Royal Oak and Nautilus – wide, flat and refined.

The Octo Finissimo is actually the latest in a series of extra-thin watches from the Roman jeweller. Over the past three years, Bulgari has repeatedly broken records in ultra-thin watchmaking, clinching the title in minute repeaters, flying tourbillons, and most recently the automatic tourbillon.

Also a record holder, the Octo Finissimo Automatic is the world’s thinnest time-only automatic wristwatch, standing just 5.15mm high – that’s 1/20th of an inch. And in titanium it barely registers on the wrist, barely tipping the scale at 68g. The crown is topped with a black ceramic cabochon

The Octo Finissimo is powered by the BVL 138, an automatic movement just 2.23mm thick that’s equipped with a single barrel and a platinum micro-rotor. The movement nevertheless offers a respectable 60-hour power reserve, likely due to its large diameter (which means a wider barrel) and relatively small balance wheel. At 36.6mm in diameter, the movement is large enough it fills up the 40mm case.

The decoration is of a quality and look that is typical for watches in this price range, visually appealing, mostly mechanically applied but neat and careful. Mechanically the BVL 138 movement inside is also notable for having a conventional construction. There are thinner movements on the market – Piaget still holds the record with the Altiplano Ultimate 910 from last year – but the BVL 138 has a separate case and movement, with the calibre relying on ordinary, full bridges. In contrast, the record setting Piaget condenses the movement by ingeniously integrated the base plate into the case back.

Now in steel or gold

Though the Octo Finissimo was first introduced in titanium, Bulgari has since added variety with the recent introduction of a steel as well as 18k rose gold version of the watch. The dials on both new versions smartly stick to the same look as the original: black dauphine hands and the same slim hour markers. Apart from the two new material iterations, Bulgari also unveiled another titanium model, now with blue hands and markers that give it an even sportier appearance. Both the steel and gold models are just a striking as the original in titanium. As is typical with Bulgari’s ultra-thin watches, the extreme slenderness of the Octo Finissimo makes its strong wrist presence perplexing. The steel and gold versions have the same dimensions as before. That means 40mm in diameter and 5.15mm high, with sapphire crystals on the front and back. Depth rated to 30m, they are still equipped with BVL 138.

Though rose gold and steel are arguably more traditional than titanium, they still retain the same case finish, an all-matte sandblasted surface that extends from bracelet to dial, creating a surface that is striking in its homogeneity and starkly futuristic in style. The grain of surface finish is, as Goldilocks might say, neither too coarse nor too fine, and just right. While all versions of the Octo Finissimo are available with a bracelet or leather strap, the metal bracelet is definitely the way to go, because the bracelet is a striking sleek and smart construction.

Like the titanium version, both the gold and steel models are fitted with bracelets measuring just 2.5mm thick, which is a millimeter thinner than the industry norm. Two features stand out in the bracelet construction. One is the hollowed out back of the link, which admittedly reduces the cost in the gold model, but has the upside of giving the bracelets a strikingly airy feel. And more striking is the double-fold clasp that sits in a recess on the back of the links, rather than sit above as is convention, ensuring uniform thickness throughout the length of the bracelet as well as improved comfort on the wrist. It’s worth pointing out that even though the steel version is the base model, priced at less than titanium and well under half the gold, it has a tiny bit of precious metal in it. The sandblasted steel has been treated with a flash of gold, or less than 0.175 microns, and another tiny touch of palladium before rhodium plating, which adds silvery brightness to the surface while creating a more durable finish. But the more visually stunning of the two is still the rose gold version. Its sharp angles are contrasted by the smooth, luminous finish of the gold. Paradoxically, the matte, sandblasted finish of the Octo Finissimo results in a gold watch that is refreshingly more casual, and a steel watch that is dressier than usual. Though it has to be said that the frosted surface of the gold model is precarious and prone to scuffs and scratches.

Both the steel and gold models are noticeably weightier than the titanium, but tangible mass of steel or gold is reassuring, and arguably more comfortable on the wrist for those unused to ultra-light timepieces.

Price-wise the gold version is a lot of money, leaving little ground to argue it’s a value buy. The steel and titanium models, on the other hand, offer quite a lot of watch – albeit very little watch in physical terms – for the money.

They are currently available from Bulgari boutiques and retailers.