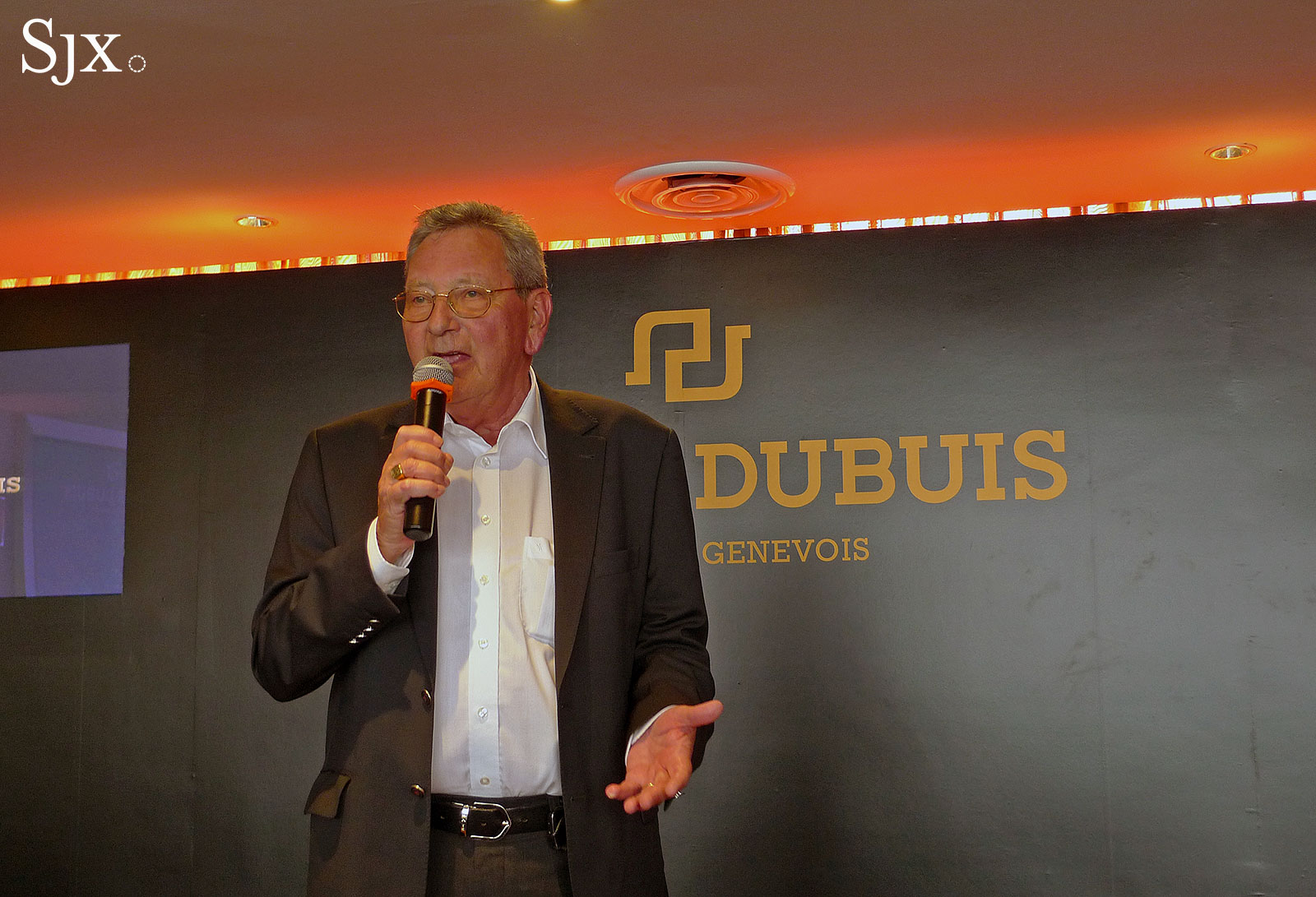 In the early 2000s, one of the hottest watch brands in the world was Roger Dubuis, a company that borrowed some of the best historical ideas in watchmaking and made it sexy for the 21st century. At the peak just before the 2008 recession, over 450 employees in its expansive Geneva factory produced some 25,000 watches a year, generating over SFr100m of revenue – with sales having doubled in some of the preceding years. But by then the man with his name on the door was gone, having retired in 2003. On October 14, 2017, Mr Roger Dubuis passed away at age 80, according to the company that bears his name.

Mr Dubuis began his watchmaking career during the golden age of Swiss watchmaking, starting at Longines in the late 1950s. Most of the nine years Mr Dubuis spent at the Saint-Imier watchmaker renowned for its chronographs were in its after-sales department where he worked on repairs. He then moved to Geneva to work for Patek Philippe as a constructor and watchmaker in the high complications workshop. This was a particularly formative time according to an interview he gave to your correspondent in 2012, with the quality and finesse of Patek Philippe watches shaping his philosophy of watchmaking.

After 14 years at the pedigreed Geneva watchmaker, he left in 1980 to set up a small workshop where he repaired watches and clocks for collectors, auction houses and watch brands. According to Mr Dubuis, in the late 1980s he starting working on his first complication, a perpetual calendar module with retrograde displays. And then in the early 1990s Mr Dubuis, the modest, subtle watchmaker, met Carlos Dias, who later became the swaggering impresario of the Roger Dubuis brand. Together they set up Société Genevoise des Montres (SOGEM) in 1995, a striking second act for Mr Dubuis, who was already 57 years old.

An intriguing perspective on the formation of the Roger Dubuis company comes from Jean-Marc Wiederrecht, the founder of respective complications specialist Agenhor. Mr Wiederrecht explains that he had been friends with Mr Dubuis for several years by the late 1980s, and together they worked on developing a retrograde perpetual calendar module at the behest of New York jeweller Harry Winston, then still family-owned and run by the founder son’s Ronald Winston.

The pair of talented watchmakers started work on the mechanism in the mid 1980s, and finished it in time for Harry Winston to launch the Bi-Retro Perpetual Calendar wristwatch at Baselworld 1989. It was the first double retrograde perpetual calendar, and Mr Dubuis would later make the same perpetual module the signature complication of his brand.

During the development of the perpetual calendar module, the two watchmakers Wiederrecht and Dubuis would often sit at a cafe in Geneva, sometimes with Mr Wiederrecht’s then girlfriend and now wife, Catherine, discussing their work while having a drink. One of the waiters in the cafe was a a Portuguese immigrant to Switzerland who had grand visions of building a watch company, Carlos Dias. And that is where Dubuis met Dias.

The first Roger Dubuis watches were acclaimed by collectors, because they were channelled the traditional Geneva watchmaking that Patek Philippe personified, while having more stylistic flair. The watches were, without exaggeration, both beautiful and interesting. In the 2012 interview, Mr Dubuis explained the original goal was to create complicated and highly finished timepieces in the most refined Geneva style, which actually meant a heavy dose of inspiration from Patek Philippe. The watches were Genevoise watchmaking on steroids.

At the beginning, Roger Dubuis watches came in two styles: Sympathie and Hommage. Shaped like a cushion with sharpened corners, the Sympathie was remarkably different and later became the signature shape of the brand. Though in later years Mr Dias claimed credit for designing the shape, Mr Dubuis explained that the basic form was proposed by a case maker in the Vallée de Joux, then refined by himself and Mr Dias. The Sympathie S37 perpetual calendar that was a fixture on Mr Dubuis’ wrist, one of the first watches he ever produced

The Hommage watches, as the name suggests, were designed as a homage to the great watchmakers of old, according to Mr Dubuis. In practice, the Hommage watch case was actually an elegant modern version of the water-resistant Patek Philippe ref. 1463 chronograph of the 1950s, right down to the onion-topped chronograph pushers.

At the same time the brand consciously paid tribute to the customs of fine watchmaking, bestowing an authentic sense of legitimacy upon the young brand. All Roger Dubuis watches were certified as chronometers by the Besançon Observatory as well as hallmarked with the Poincon de Geneve, or Geneva Seal. Each watch was even tagged with a tiny lead seal bearing the Poincon de Geneve. At the time, it was mainly Patek Philippe movements that carried the Geneva Seal, which is why Mr Dubuis felt it was crucial to have the same hallmark. The old school watchmaking sensibility of Mr Dubuis matched well with the aggressive Carlos Dias, a relentless marketing short in stature but large of personality. By 2004 the company was riding high and Mr Dias had earned a spot on the annual ranking of the richest people in Switzerland published by Swiss business magazine Bilanz. He had an estimated net worth of SFr100m to SFr200m, making him the second richest person in independent watchmaking after Franck Muller and Vartan Sirmakes. By then, however, Mr Dubuis, still the quiet, subtle watchmaker, was long gone, having retired in 2003 without a place on the Bilanz list.

So common that it’s almost the inevitable fate of most watchmakers who go into business with businessmen, Mr Dubuis was edged out by the savvier and sharper Mr Dias, who always had a larger stake in the company; Mr Dubuis held just 10% according to some accounts. With Mr Dubuis out, the aesthetic vision of Carlos Dias, by then fortified with a doctorate, consumed the company. The watches got bigger and more flamboyant, with model names like Much More, Too Much and Follow Me. Mr Dias was particularly proud of the sports watches he designed, one of which was a diver’s watch with a square elapsed time bezel that could not rotate. Roger Dubuis even began producing its own line of jewellery inspired by its watches.

At the same time, the company grew at a rapid, and eventually reckless, pace. In 2001 the company built a huge facility in Meyrin, an industrial suburb of Geneva, which it expanded gratuitously in 2004, creating a factory with over 150,000 square feet of space. That was a result of Mr Dias’ obsession with building watches in-house, which meant the company acquired the rights to manufacture its own Lemania cal. 2310 chronograph movements, and even set up its own enamel workshop with a young Domnique Baron in charge (she later became chief enameller at Richemont dial-maker Stern Creations but passed away in 2012). The culmination of Mr Dias’ vision, before it all went wrong

On the eve of the 2008 recession, Manufacture Roger Dubuis, as Mr Dias had inevitably renamed the brand, boasted almost thirty different in-house calibres, including the exotic double tourbillon and an impressive eight-day, barrel-shaped chronograph movement. Most of the calibres, however, did not function properly, a consequence of the breakneck expansion. Having invested an estimate SFr150m into the manufacture, and coupled with flagging demand for its unreliable watches, the company was in debt and losing money. Eventually, half the workforce was laid off as the brand’s principal banker Credit Suisse was looking to get its money back.

Mr Dias then beat a hasty but lucrative exit in 2008, selling his 60% stake in the company to Richemont, for an estimate SFr150m (the other 40% was owned by Syrian-born Akram Aljord, once the Cartier distributor in Dubai, who sold his shares to Richemont in 2016).

Richemont, in return for its nine-figure investment, got a massive factory capable of making practically the entire watch movement, right down to the hairspring. Many industry insiders at the time speculated that the Swiss luxury conglomerate bought Roger Dubuis for its production capacity, rather than the name. A good portion of that capacity was then turned over to other Richemont brands, including Cartier, and Roger Dubuis was restructured from top to bottom. All of its in-house movements were reengineered, and most were scrapped.

Talk at the time of the takeover was that Mr Dias wanted to remain as chief designer, an idea Richemont swiftly put paid to by replacing him with the serious minded former chief operating officer of IWC. Mr Dias left as soon as the acquisition was complete and is now a gentleman vintner living in Monaco, producing wine at estate in Portugal while owning beverage distribution in Angola.

And in an ironic twist, Mr Dubuis was brought back to the brand that bore his name, becoming a storied brand ambassador carted out at Roger Dubuis events. Still the quiet and subtle watchmaker he was when he first set up the company, there existed an almost imperceptible disconnect between Dubuis the man and the company, now distinguished by its Lamborghini partnership and Formula 1 watches.

Mr Dubuis nonetheless was pleased with the attention and spoke warmly of Richemont’s turnaround of the company. Today Roger Dubuis turns over about SFr50m a year on production of about 5000 watches, and generally channels the spirit of Carlos Dias, rather than the late Mr Roger Dubuis, whose fleeting but glorious vision of Genevoise watchmaking will perhaps be resurrected in the future by another ambitious entrepreneur.