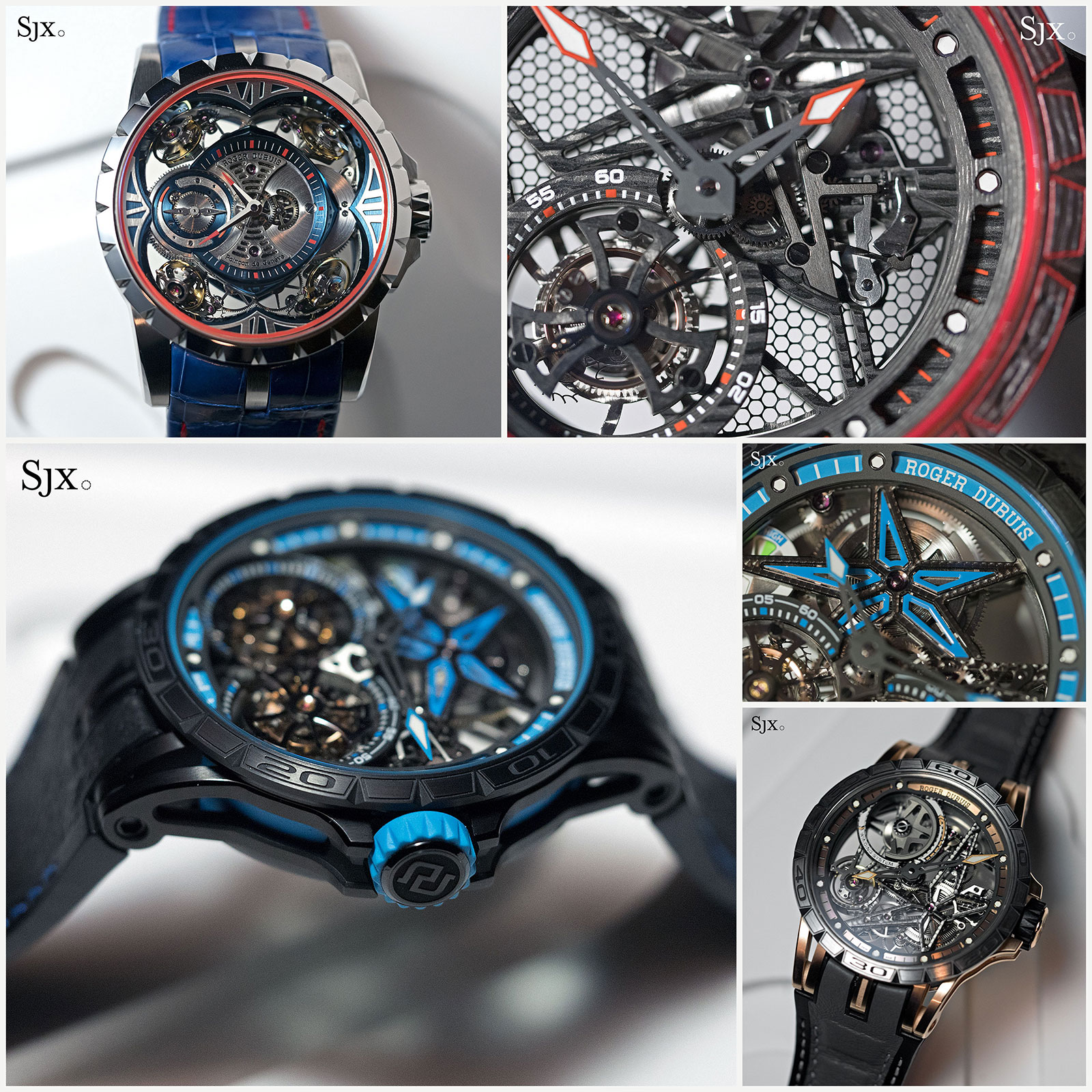 Roger Dubuis‘ offerings for SIHH 2017 stuck to its bestselling Excalibur line, with improvements in materials and colours, and also a mystifying tie-up with tyre-maker Pirelli.

With a skeletonised case that’s characteristic of the Excalibur Spider, the Pirelli editions comprise a double tourbillon as well as automatic skeleton, both with black diamond-like carbon (DLC) coated cases with blue rubber accents on the movement, chapter ring and crown. In fact, the flanks of the open-worked case reveal the blue vulcanised rubber coating on the inner case that holds the movement. A tangible Pirelli connection is found on the rubber straps, which are inlaid with rubber taken from Pirelli tyres used on Formula 1 cars during the 2016 season. While the outer inlay has a granular texture, the inside of the strap is moulded to look like the treads of a Pirelli Cinturato tyre.

The Excalibur Spider Pirelli Double Flying Tourbillon is 47mm in diameter and equipped with the RD105SQ, a hand-wound calibre that’s been open-worked in signature star pattern of the brand. It has two flying, one-minute tourbillons with cages shaped like a Celtic cross, as well as a power reserve display at nine o’clock. The power reserve is a new feature, not being found on the first generation Excalibur double tourbillon. Limited to just eight pieces, the double tourbillon comes with a two-day motorsport experience as a guest of Pirelli. It is priced at SFr280,000 or S$442,000.

Similarly styled but smaller at 45mm, the Excalibur Spider Pirelli Automatic Skeleton keeps the distinctive skeletonised, star-motif movement design but is a time-only watch. The RD820SQ has a micro-rotor on the front, as well as the balance wheel, giving the dial a significant amount of detail. Based on the first Excalibur Spider Tourbillon in titanium, the Excalibur Spider Carbon is the most striking watch of the Roger Dubuis line-up for the year, with the case as well as structural movement parts made of carbon composite.

Produced by layering thin sheets of carbon fibre that are then set in resin, and cutting the resulting material against the grain, the carbon composite reveals a distinctive banded pattern. While different from the layered carbon composites used by the likes of Richard Mille and Panerai, the material is similar. The outer structure of the case, meaning the bezel and lugs, are made of carbon composite, while the inner case is titanium coated in red vulcanised rubber. More unusually, the base plate, bridges and the Celtic-cross upper cage of the tourbillon are also made from the same composite material.

The liberal use of carbon composite and skeletonised case means the watch is fairly lightweight, despite the large 45mm diameter. Another striking feature is the honeycomb mesh that sits in between the bridges and base plate. The movement is the calibre RD509SQ, hand-wound and equipped with a single flying tourbillon, with a 70-hour power reserve.

The Excalibur Spider Automatic Skeleton in titanium and pink gold is a fancier version of the original time-only skeleton. What makes it different is the case, which has the lugs in 18k pink gold, while the bezel and back and are in titanium – an appealing combination. The size remains 45mm, as does the RD820SQ movement inside. Limited to 88 pieces, the price of the Excalibur Spider Automatic Skeleton has yet to be announced.

Previewed before SIHH, the Excalibur Quatuor Cobalt Micromelt has four balance wheels and an case made from an unusual cobalt-chromium alloy produced via a high-tech proprietary method.

Named Micro-Melt, the process starts with a liquid alloy that’s turned into a fine powder via a high pressure gas. The powder is then filtered to keep only the finest particles, then subject to high temperature and pressure, creating a dense and hard metal. The resulting cobalt-chromium alloy is strong and corrosion-resistant, and also weighty in the hand as well as a bright silver in tone. While the colour of the case is striking, the new alloy does little to help the wearability of what is already a large and heavy wristwatch. Inside the 48mm case is the RD101, a hand-wound movement with four regulators that average each other out for better timekeeping. And the last of the new line-up is the Excalibur 36 Automatic in black DLC-coated titanium with a blue sapphire bezel. The 36mm case has 48 blue sapphires on the bezel to match the metallic blue dial that has oversized Roman numerals made of a thin layer of rhodium, giving it a look that’s novel and edgy for a ladies’ jewellery watch. The movement inside is the RD830, an automatic with a 48-hour power reserve.