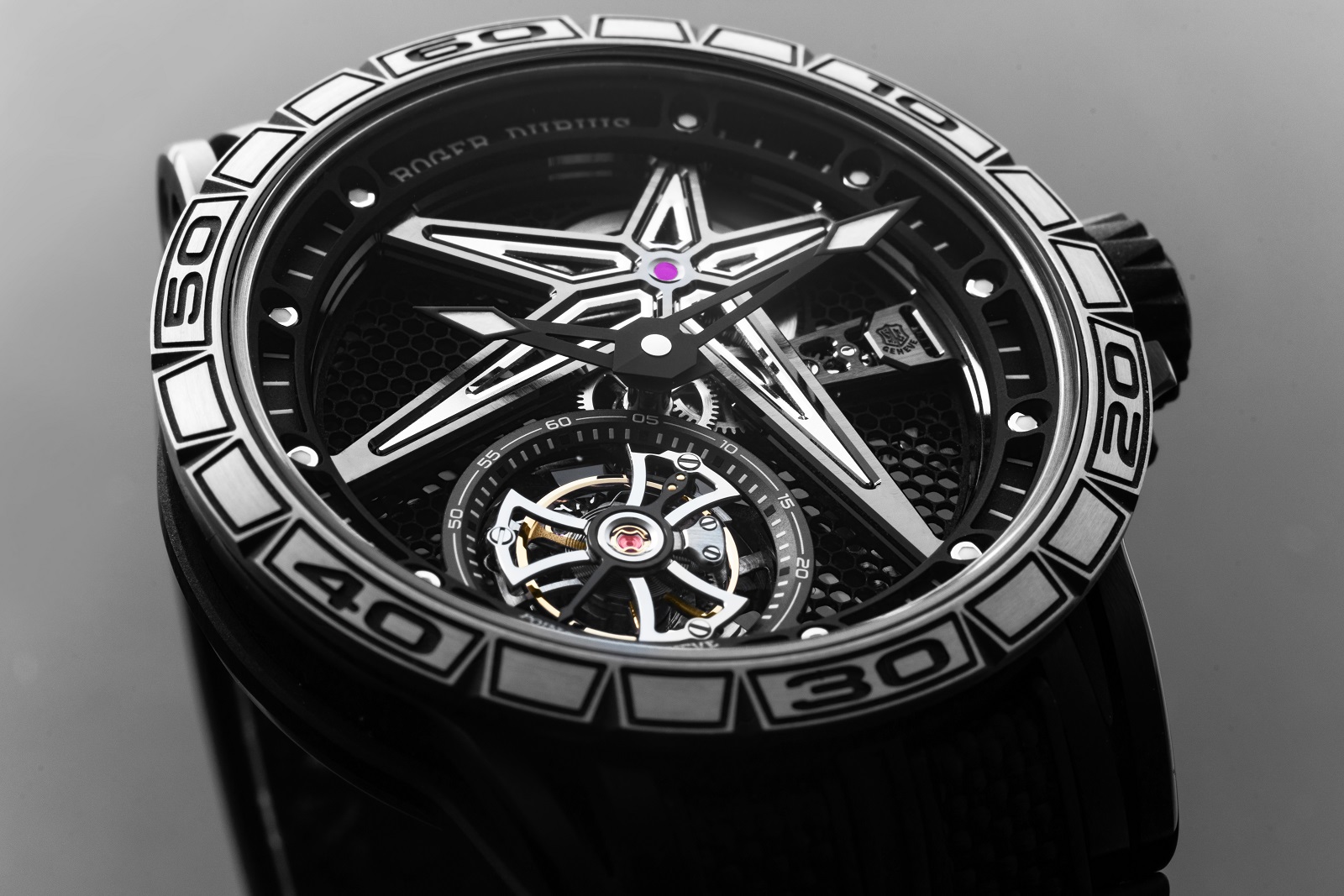 Known for its bold, big, and skeletonised watches, Roger Dubuis is paring back its extravagant style – just slightly – with two smaller, 39 mm versions of the Excalibur Spider. Limited to 88 pieces in each guise, the Excalibur Spider 39 mm retains the brand’s signature Celtic-cross flying tourbillon and the open-worked case of the lightweight Spider series. 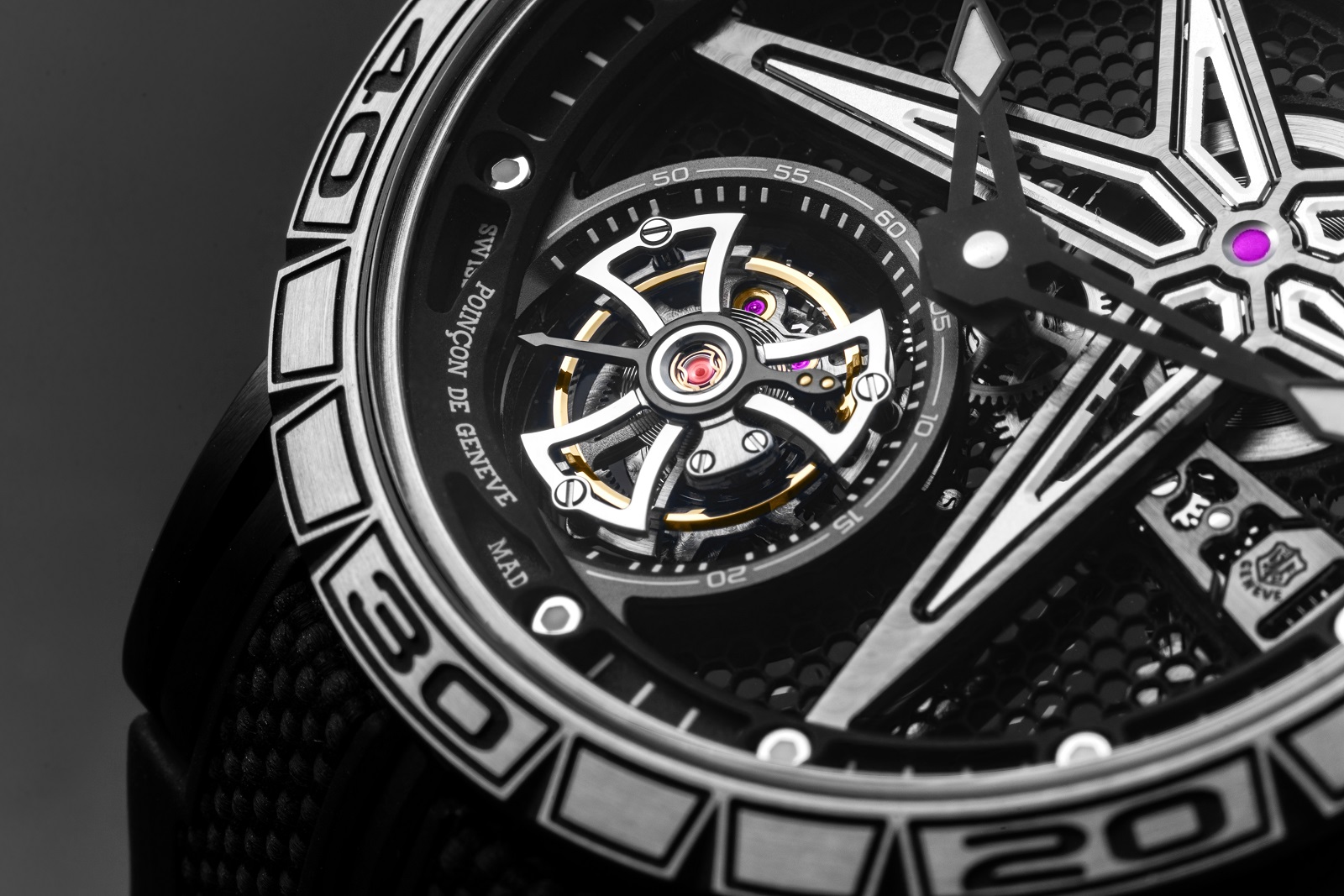 With the same aesthetic found on earlier Excalibur watches, which were either 45 mm or 47 mm, the new 39 mm models are practical rather than innovative. And the RD510SQ skeleton flying tourbillon movement already exists, found inside the 36 mm Excalibur watches for women.

What’s new is the 39 mm case, which makes the Excalibur substantially more wearable. The new case is undoubtedly a commercial decision, since the line between watches for each gender gets increasingly fuzzy. 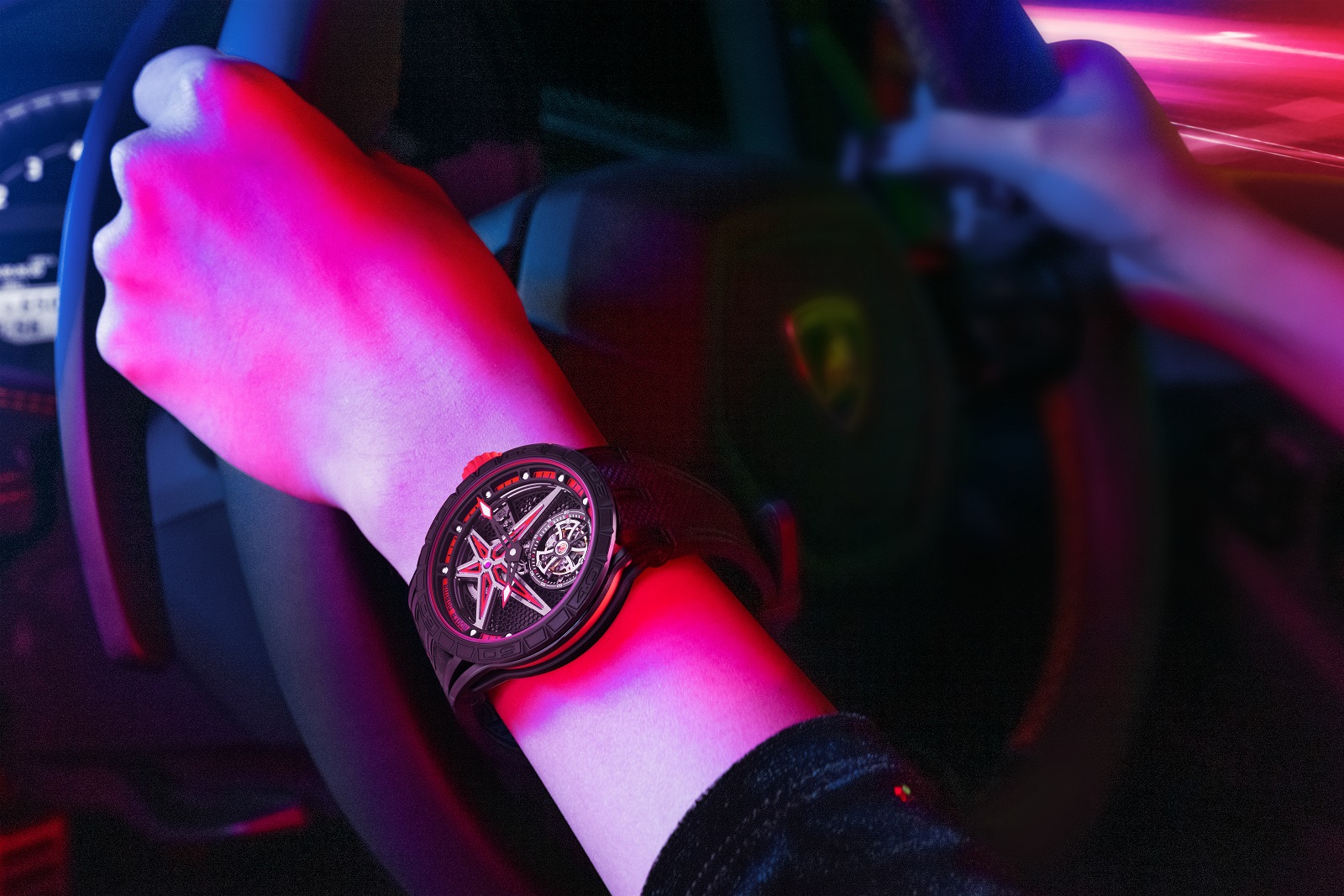 More women now want larger watches, while men sometimes revert to case sizes that are more old-school 20th century than 21st. During the online launch of the 39 mm models, Roger Dubuis chief executive Nicola Andreatta noted that the 36 mm Excalibur watches were a surprise hit amongst male clients in Japan, despite being marketed as ladies’ watches.

The 39 mm Excalibur Spider fills a sweet spot without reinventing the wheel. So if you’re a fan of the Roger Dubuis Excalibur but have long found them too large, the 39 mm models are worthy of of consideration.

The more masculine of the two, the titanium version has a diamond-like carbon (DLC) coated case middle with rubber inlays, and a brushed titanium bezel. It’s a subtle fusion of titanium and rubber, making it the most understated of the trio. 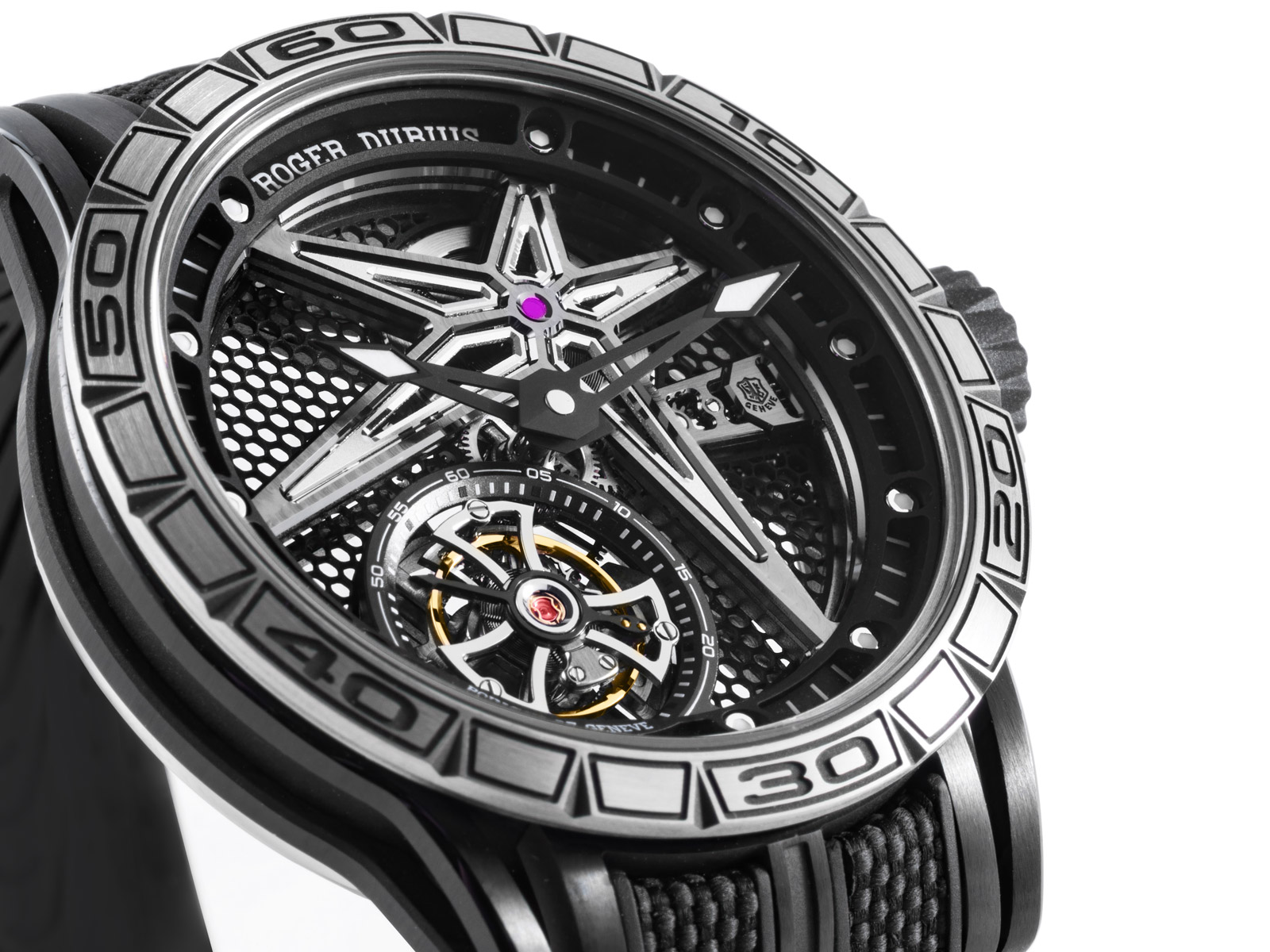 More feminine but not specifically a ladies’ watch is the version in pink gold with white rubber inlay. It’s accented with brilliant-cut diamond hour markers on the open-worked ceramic flange, while doing away with the honeycomb mesh found on the other models. The result is a more flamboyant and less technical appearance. This makes more of a statement than the other versions, and being precious metal with diamonds, it is also the most expensive. 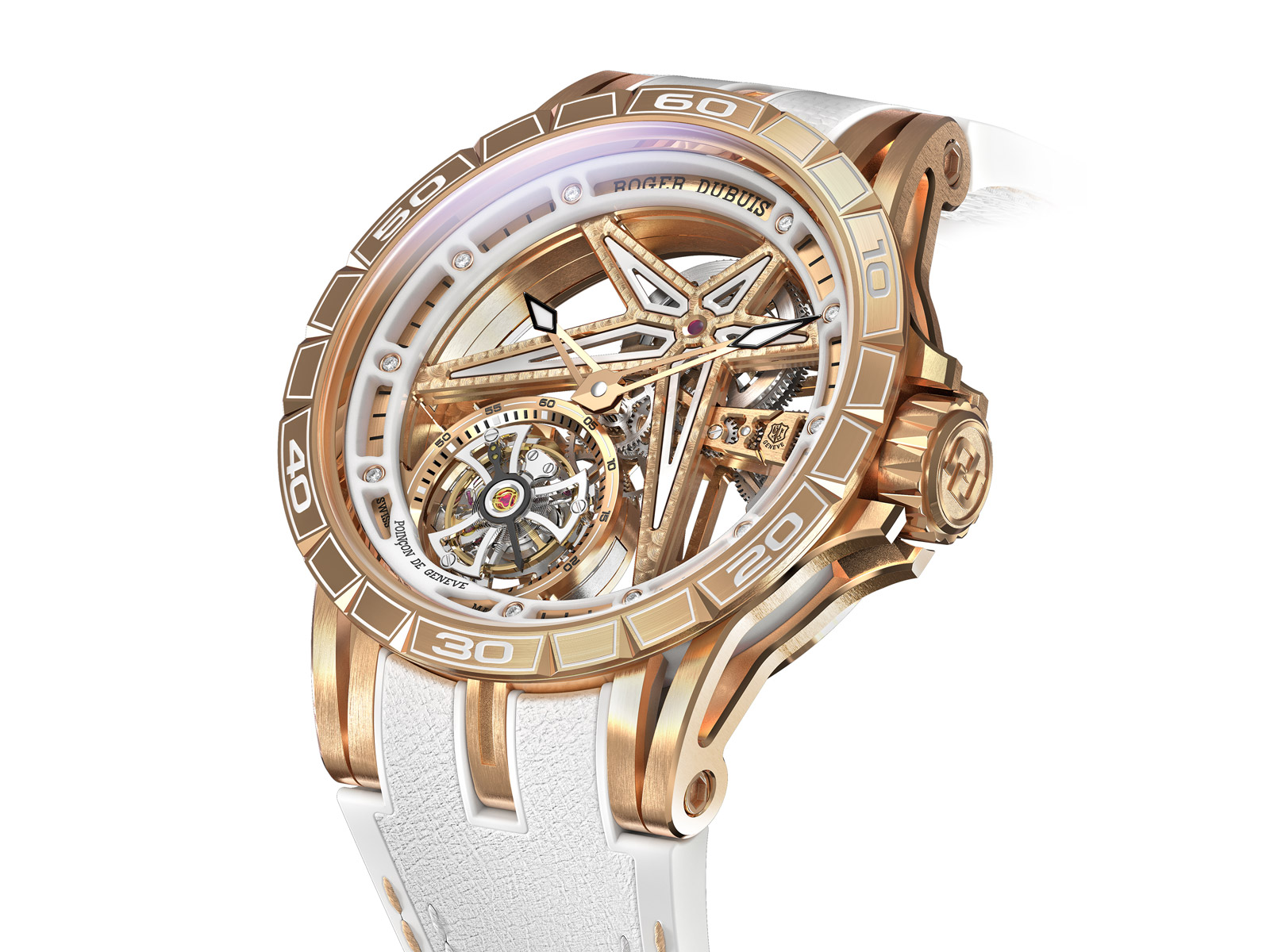 And the sportiest of the three is the Excalibur Spider Pirelli 39 mm. This has a blacked-out aesthetic that’s all DLC-coated titanium with red rubber accents.

Exclusive to Roger Dubuis boutiques, it is fitted to a strap inlaid with actual rubber from Pirelli tyres taken from the winning cars in auto races. Despite the small edition run and the Pirelli-rubber bonus, this costs exactly the same as standard Excalibur Spider in titanium. 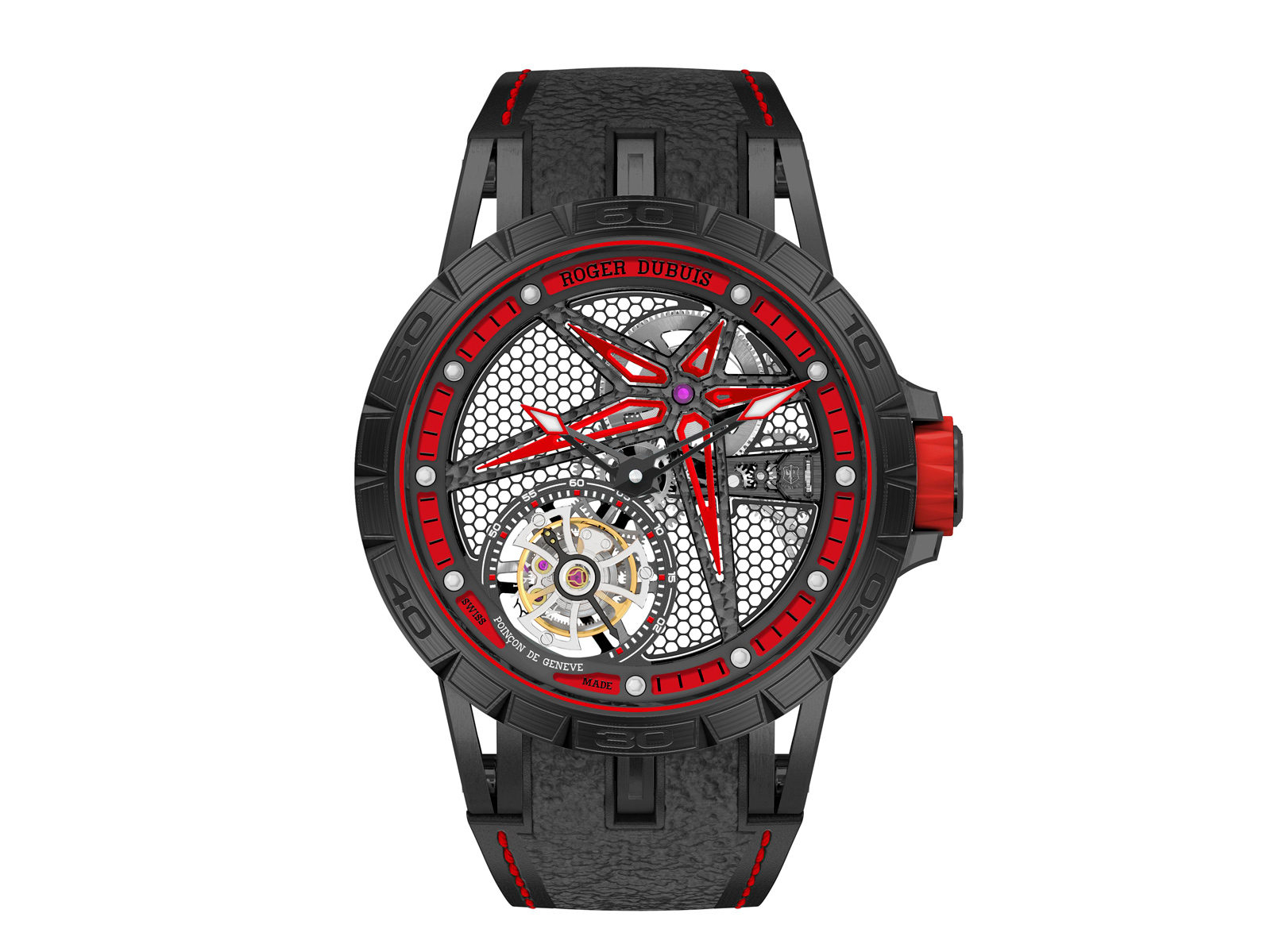 All three watches are powered by the same RD510SQ, a hand-wound, in-house movement with its bridges and base-plate open-worked in Roger Dubuis’s trademark star motif. The centre of the largest star is the mainspring, while the smaller star underpins the flying tourbillon. And as with all of the brand’s mechanical watches, the Excalibur Spider 39 mm is hallmarked with the Poinçon de Genève, or Geneva Seal. 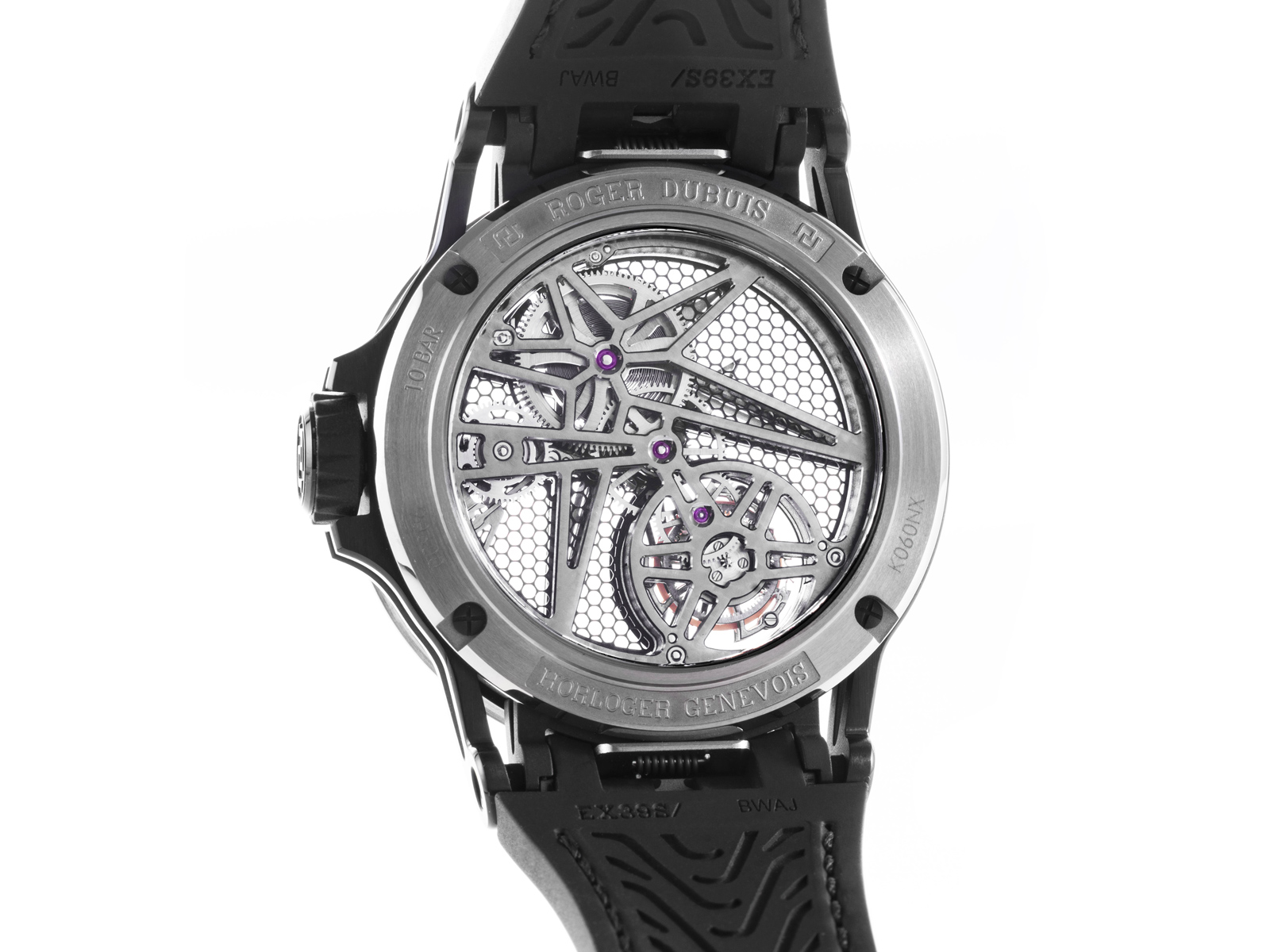 Carbon composite and diamonds, for the bracelet too.