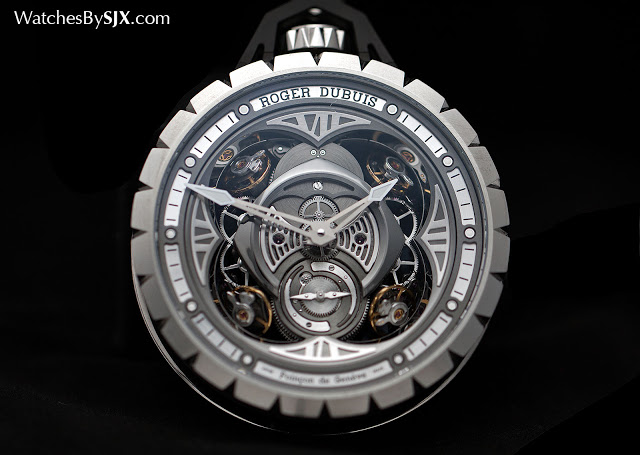 A pocket watch that can be converted into a desk clock, the Roger Dubuis Excalibur Spider Pocket Time Instrument is equipped with the Quatuor movement with four oscillators. Featuring the same RD101 movement that was introduced in the Excalibur Quatuor in 2013, the Excalibur Spider Pocket Time Instrument is a titanium pocket watch regulated by four balance wheels. Roger Dubuis‘ latest creation can be carried in a vest pocket with the accompanying titanium chain, or used as a clock, suspended from a large, open-worked desk stand. The  Excalibur Spider Pocket Time Instrument is the second pocket watch Roger Dubuis has introduced this year, after the one of a kind Hommage Millésime. Unlike the Hommage Millésime that was powered by a restored 19th century movement, the Excalibur Spider pocket watch is a thoroughly modern creation, with the RD101 movement inside. The key characteristic of the RD101 is its four balance wheels, operating in pairs. Each pair of oscillators is linked by a differential that averages out the rate of the two. That is then further averaged out a second time, producing superior timekeeping in all positions. That’s because each balance wheel is inclined, with one compensating for any gravitational errors in another, according to Roger Dubuis.

Though it has no complications per se, the RD101 is a complex beast, comprising some 590 parts, a count comparable to that of a movement featuring a minute repeater, perpetual calendar and tourbillon. Similar to all other Roger Dubuis movements, the RD101 is hallmarked with the Poinçon de Genève, a seal of quality overseen by the government of Geneva. While the movement is exactly the same as in the Quatuor wristwatch, its alignment is rotated 90 degrees for the 12 o’clock crown. This means the face of the Excalibur Spider pocket watch is symmetrical, with the power reserve display at six o’clock. That symmetry is echoed on the back, with the twin barrels visible at 6 and 12 o’clock, along with winding click springs that mirror each other. The 60mm case is a combination of titanium in a natural finish and contrasting black-coating. And as is typical of the Excalibur Spider line, the bow of the pocket watch has been skeletonised, along with the chapter ring of the dial. Limited to 28 pieces, the Excalibur Spider Pocket Time Instrument is priced at S$680,000 including 7% tax, equivalent to US$491,000.