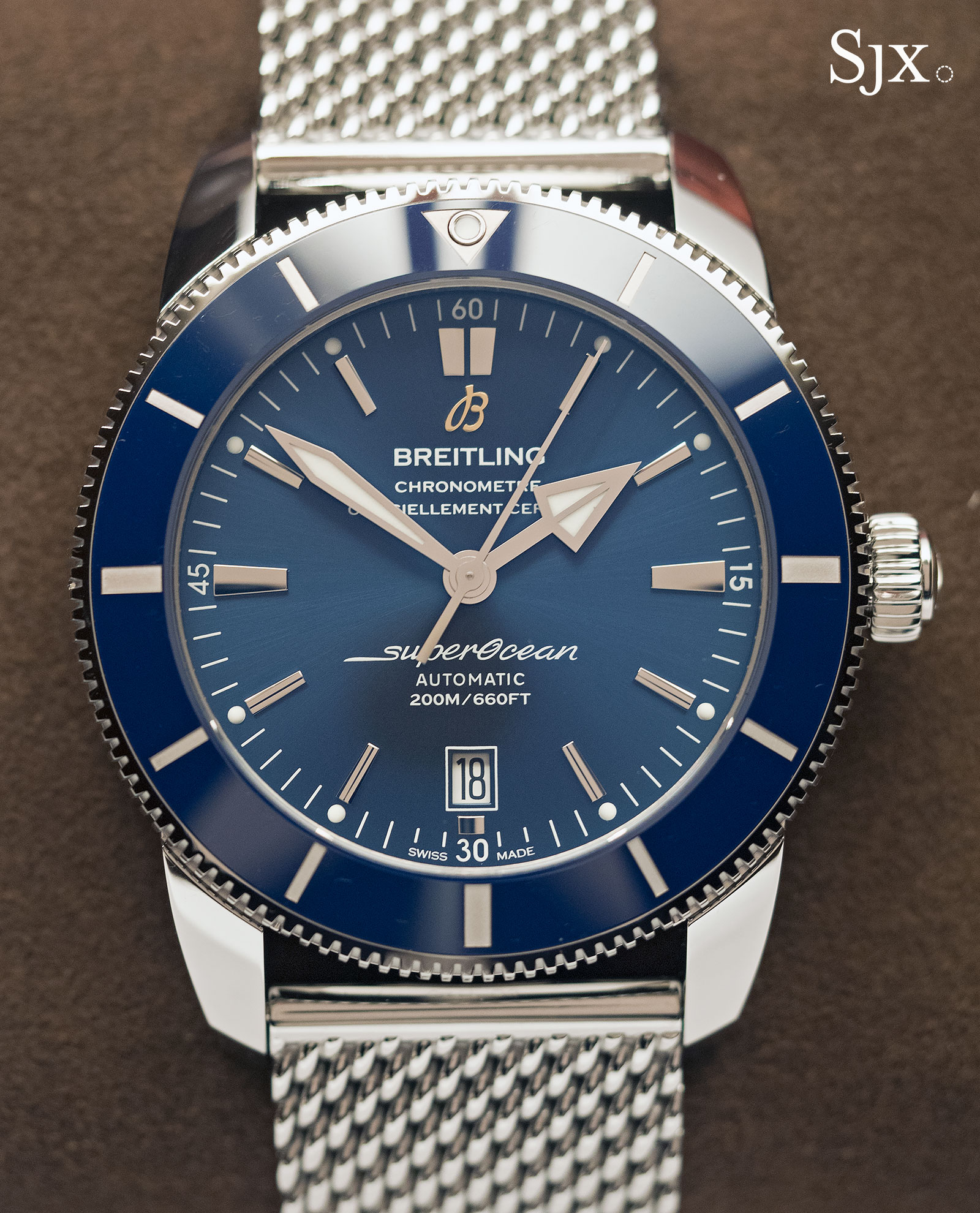 One of the notable pieces of news at Baselworld 2017 was Breitling‘s tie-up with Tudor: the latter gets the Breitling 01 chronograph movement for the Black Bay Chrono, while in return Breitling is supplied the Tudor MT5612 movement, now installed in the Superocean Heritage II, the second generation of Breitling’s retro dive watch.

The Superocean Heritage II has slightly restyled, but the design tweaks are slight: minor changes to the shape of the lugs and crown, as well as reshaped hands and hour markers. More substantially, it’s been improved with a ceramic bezel, and a better performing movement. Like the first generation, the new Superocean Heritage is available in two sizes, 42mm and 46mm, with new dial colours available, including an unusual but attractive bronze. Both sizes are near identical in design. The 46mm is suitably large for a sports watch but somewhat mismatched with the vintage-inspired look. On the other hand, the 42mm is closer to the original in size (but still significantly bigger), yet feels diminutive compared to the typical modern Breitling. The earlier version had an anodised aluminium bezel insert, which has been replaced by a ceramic insert with an added luminous marker at 12 o’clock. It’s a minor but practical upgrade given the scratch- and fade-resistance of ceramic. The new calibre means the case is now thicker, albeit imperceptibly, 15mm high compared to 13.6mm before. The tradeoff, however, is worthwhile.

The movement inside the earlier generation was the Breitling 17, a dressed-up ETA 2824. COSC-certified and robust, the 2824 is nonetheless a economical movement, with a shortish 40-hour power reserve.

That’s been replaced by the Breitling B20, which is the MT5612, the same calibre in the Tudor Black Bay Steel and two-tone. As the calibre inside Tudor’s new chronograph is produced by Breitling, this movement is made by Tudor, an arrangement that was likely put in place to maximise the production capacity of each brand. The B20 movement has a convenient power reserve of at least 70 hours, or about three days, as well as a free-sprung, adjustable mass balance wheel. While it is no doubt largely regulated by electronic tools rather than a lone artisan, a free-sprung balance is traditionally a feature of finer chronometers. It’s also worth pointing out that the Breitling version of the movement is more fancily decorated than Tudor’s (which is an appropriate upgrade since the Breitling is pricier). Though the calibre is hidden behind a steel back, the bridges are finished with Geneva stripes, while the engravings are gold-plated. All of it is purely aesthetic, and applied by machine, but it has visual appeal. The face-lift also extends to the Superocean Heritage II Chronographe 46, but the changes are purely cosmetic. This too has the design tweaks on the case and dial, as well as the ceramic bezel and new dial colours, but the movement remains the Valjoux 7750. The Superocean Heritage II costs only about 8% more than the first generation, or less than US$400 in most cases.

It’s reach stores August 2017, starting at US$4140 or S$5900 on a leather strap with a pin buckle. It’s also available on a rubber strap or mesh bracelet.

Breitling stays with what it does best with the Avenger II Seawolf Blacksteel, a very large, aggressively styled dive watch with a military flavour.