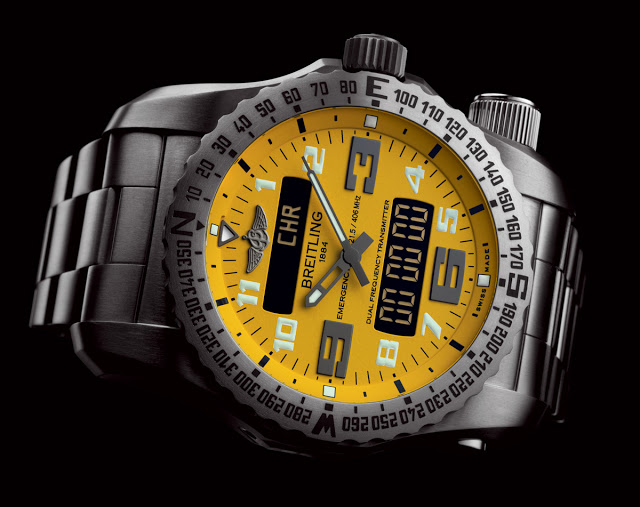 The Breitling Emergency II is an improved version of the famous distress signal watch. It can broadcast in two frequencies, enabling it send a signal to the satellite-based Cospas-Sarsat distress alert system. Launched in 1995, the original Breitling Emergency had a built-in personal locator beacon (PLB) which could transmit a distress signal on demand and was intended for those unfortunate enough to be stranded in an inhospitable, remote place. But the international standards for distress signals have changed since then, and the Breitling Emergency II has been designed to ensure that anyone who needs to use such a watch will be heard. Like the original Emergency, the new Emergency II broadcasts a distress signal at 121.5 MHz, which can be received on land, by ships and also aircraft. But the Emergency II also sends out a signal at 406 MHz, meaning it can be received by the satellites of the Cospas-Sarsat system. Cospas-Sarsat is a multinational satellite system for search and rescue (SAR), which is comprised of five geosynchronous satellites and six low Earth polar orbit satellites. The distress signal is transmitted from the watch from two antennae in the lower part of the case. A cap must be unscrewed and pulled out on the right side of the case, extending the main antenna and also releasing the cap on the second antenna on the left. And in case the wearer forgets how to operate the transmitter, instructions are also engraved on the back of the watch. Once set up, the Emergency II will broadcast a distress signal alternating between the two frequencies over 24 hours. The first signal is sent on the 406 MHz frequency intended for satellites and lasts 0.44 seconds every 50 seconds, while the second signal on the 121.5 MHz lasts 0.75 seconds every 2.25 seconds. The transmitter has its own rechargeable battery, with a battery life of more than 18 hours at -20 °C and over 24 hours at +20 °C (bad news for those stranded somewhere chilly). This is charged by a special unit that both charges and tests the transmitter to ensure it is functioning well. Separate from the distress signal tranmission unit is the watch movement, which is powered by a thermocompensated quartz movement. It has the usual electronic functions, including 1/1000th second stopwatch, countdown and so on. The watch will function in temperatures from –20 °C to +55 °C and is water resistant to 50 m. The watch case is titanium with a diameter of 51 mm. It is available on titanium bracelet or rubber strap, with the choice of yellow, orange or black dials. That means once the SAR team reaches the area, they just need to locate the enormous brightly coloured watch, which should be easy enough.