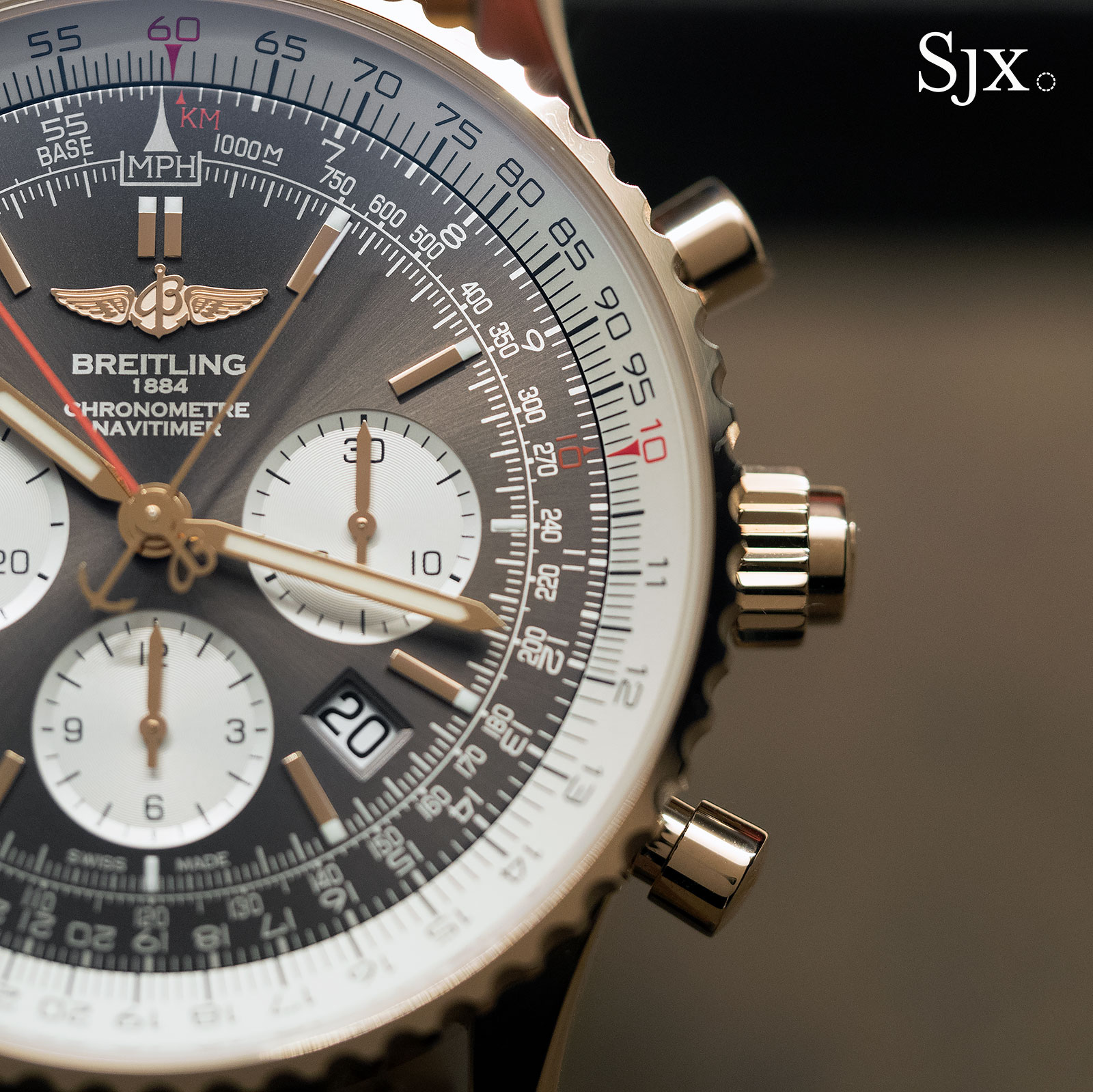 Originally designed for pilots in the 1960s, the Navitimer is characterised by the circular slide rule bezel that allows aviators to perform various calculations on the fly – no pun intended. While the slide rule is now an anachronism that is no longer useful thanks to electronics, the Navitimer has preserved its original look. The Navitimer Rattrapante is a large, 45mm wristwatch with a split-seconds that’s activated via a pusher that’s co-axial with the crown, eliminating the extra button at 10 o’clock that split-seconds often have. The Navitimer Rattrapante is available in steel or 18k red gold, the latter being a 250-piece limited edition. Both versions are fitted with a “Panamerican Bronze” dial that’s an appealingly shade of brown that has a radial brushed finish. It has imposing wrist presence and a beautifully finished dial with fine and tidy printing despite the complexity of the slide rule. But the 45mm case will probably be too big for a significant number of people.

While both versions have the same dial colour and design, the hour markers, hands and Breitling colour match the colour of the case metal. And the other difference between the two versions is the see-through sapphire back on the red gold limited edition, while the steel model has a solid back. The Navitimer Rattrapante in steel A notable but purely aesthetic feature of the watch are the different counterweights on the ends of each split-seconds hand. Each forms one half of the Breitling logo, a “B” and anchor respectively, combining to form the logo when the hands are reset to 12 o’clock. Though the design is classic, slide rule and all, the movement inside the Navitimer Rattrapante is new. Automatic and COSC-certified, the Breitling B03 movement inside the Navitimer Rattrapante is built on the Breitling 01 movement, the in-house calibre that Breitling also recently starting supplying to Tudor. It’s a solid movement with all the features expected of a modern chronograph, namely a column wheel and vertical clutch. While the split-seconds function of the B03 operates like conventional split-seconds, it has been constructed in a condensed, ingenious manner to improve reliability and ease of servicing. The entire split-seconds mechanism comprises just 28 parts, reducing the grandness of what is traditionally a grand complication, but making it significantly more affordable.

To start with, the split-seconds mechanism is modular – even though the chronograph base movement is integrated – sitting in between the dial and main plate of the base movement. Consequently, when seen from the back, the Breitling B03 movement looks almost identical to the basic B01 movement that’s a pure chronograph. The second patented feature inside the B03 movement is the isolator mechanism, which uses a simpler, stamped lever to replace the traditional pin. While different, the isolator mechanism performs the same function as it always has in a split-seconds: preventing drag on the timekeeping mechanism, and the resulting deterioration in timekeeping, when the split-seconds hand is stopped.

With the isolator in the split-seconds and the vertical clutch in the chronograph mechanism, the B03 movement preserves much of its 70-hour power reserve, even while the chronograph is running. The simplified split-seconds mechanism translates into a more affordable price, with the steel model priced at just over US$10,000, which is pretty good for an in-house split-seconds chronograph. That’s about 10% less than what IWC asks for its Portugieser Chronograph Rattrapante that has inside a cleverly modified Valjoux 7750. The Navitimer Rattrapante in 18k red gold is limited to 250 pieces and priced at US$32,895 or S$48,190 for the version on a rubber strap with 18k red gold folding clasp. There are also less expensive red gold versions fitted to simpler straps and buckles, starting at approximately US$28,000 or S$39,000.