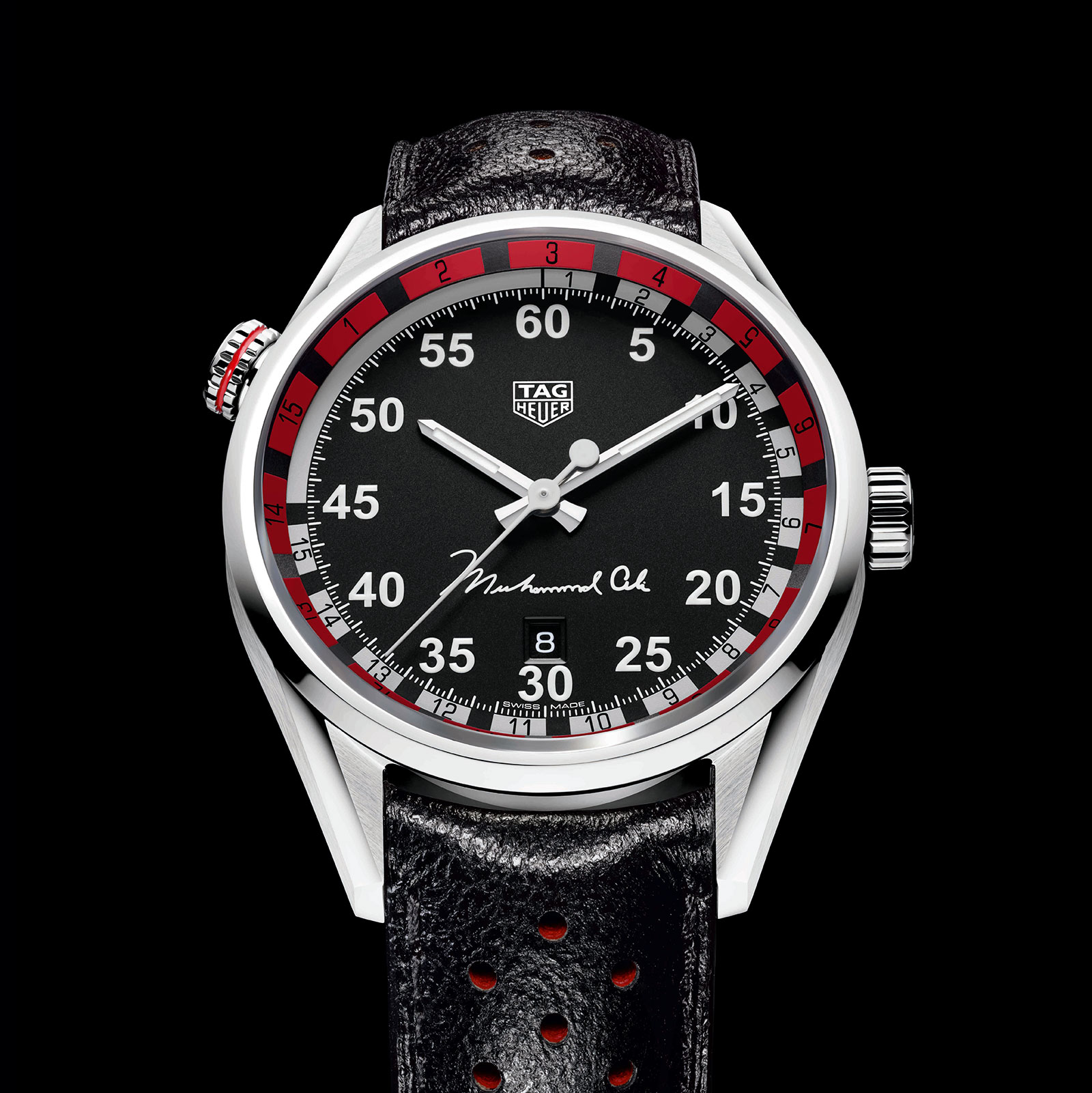 The TAG Heuer Carrera Calibre 5 Ring Master “Special Edition Tribute to Muhammad Ali” is modelled on a 1950s Heuer stopwatch equipped with interchangeable rings on the edge of the dial. These were graduated for various time intervals to record elapsed time in almost any sort of activity, from sports to scientific experiments.

One version of the Ring-Master featured a boxing scale that could track the rounds of a boxing match – the very same feature that’s been replicated in the new Muhammad Ali limited edition wristwatch. Based on the Carrera Calibre 5 Driver Timer – one of the brand’s entry-level mechanical watches – the Ring Master wristwatch has twin boxing scales on the perimeter of the dial. Rotatable via the crown at 11 o’clock, the outermost red and black scale is graduated for men’s boxing, with rounds of three minutes in red interspersed with one minute breaks in black. It shows a total of 15 rounds, the convention until the early 1980s, while modern boxing rules dictate only 12 rounds. And the inner scale of the dial is for women’s boxing, with two minute rounds shown in white and one minute breaks in between. Like the original stopwatch, the Ring Master “Muhammad Ali” has five minute numerals instead of hour markers, while the Ali signature at six o’clock is a modern touch. The case is steel and measures 43mm in diameter, with a likeness of Ali cast on the case back. Inside is the Calibre 5, an automatic movement that’s actually a Sellita SW200. The Ring Master is a limited edition of 750 watches stainless steel, plus a single example in 18k gold. Packaged in a leather clad trunk with boxing gloves and various Ali memorabilia, the solid gold unique piece was sold to benefit the Muhammad Ali Center, a museum dedicated to the boxer in his hometown of Louisville in the United States.

Notably this is not the first mechanical wristwatch dedicated to the boxer. Four years ago IWC unveiled the Big Pilot’s Watch Edition Muhammad Ali, a limited edition variant of its oversized aviator’s watch in black and red with Ali’s signature on the back.

Hands-On with the TAG Heuer Carrera Calibre 18 Telemeter, Modelled on the 1960s Carrera 30

Based on the vintage Heuer Carrera 30, the Carrera Calibre 18 Telemeter is the newest addition to TAG Heuer's line of chronographs inspired by historic motorsports watches.