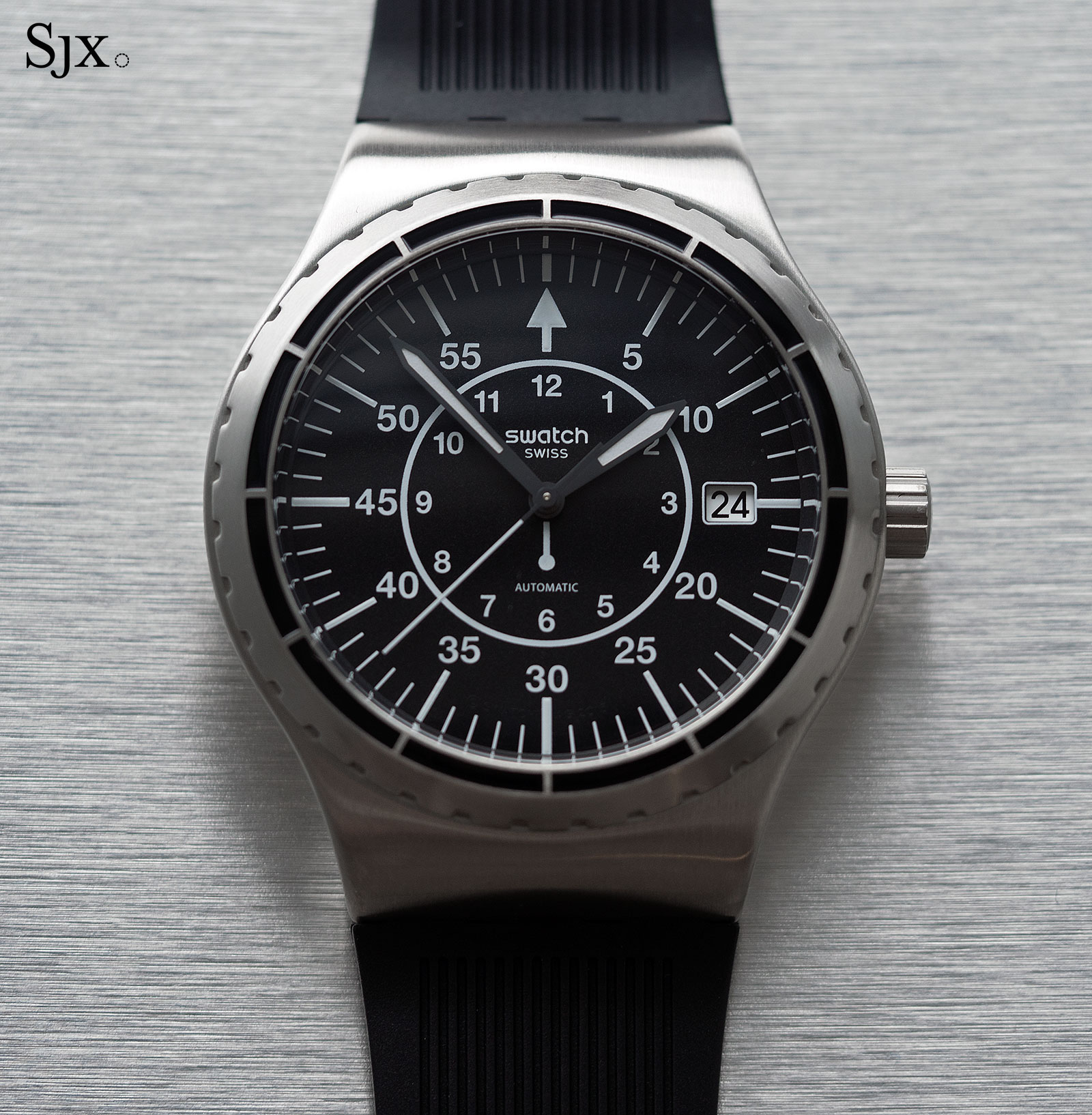 Introduced three years ago to much fanfare, the Swatch Sistem51 was a landmark in Swiss mechanical watchmaking, a mechanical wristwatch made entirely by machine, allowing it to be priced at just SFr150 (or about US$150). Funky and colourful, the original Sistem51 was mostly plastic and felt that way.

The new Sistem51 Irony gives the watch a metal makeover, replacing the plastic case with one in stainless steel, as well as replacing the colourful faces with more serious looking dials with metallic finishes. These upgrades come at a modest price increase of about 30% over the plastic model, making the Sistem51 Irony a more appealing buy in comparison.

Though the same size as the plastic model, the Sistem51 Irony unsurprisingly feels significantly more substantial and expensive. The steel case is 42mm in diameter and 13.8mm high, a good size even by modern standards and it does not feel overly large on the wrist.

Simply shaped in the typical Swatch form, the case is stamped and finished either with a mirror polish or matte brushing, depending on the model.

Like all Swatch watches it has notched lugs, meaning that only Swatch bands or bracelets will fit the case. An inconvenience but not a major one, since replacement bands are inexpensive. The Irony watches are powered by the same automatic movement found in the plastic Sistem51. Though the movement is as elementary as it looks, the movement is a feat of engineering, being put together cleanly and efficiently by machines.

The calibre is a condensed version of a typical automatic movement, with just 51 components in all, with most of the parts secured by a long central screw. Despite its simplicity, the Sistem51 movement nonetheless manages a respectable 90-hour power reserve, or just under four days of running time. The case is hallmarked with the logo of ETA, Switzerland’s most powerful maker of movements

As with the plastic Sistem51, the movement inside the Irony is mostly made of ARCAP, a copper-nickel-zinc alloy with properties useful for a watch movement, namely being easy to machine, non-magnetic and immune to temperature changes. Though all the Sistem51 Irony watches have the same movement, the printed decoration (either a printed cube or spiral motif) differs according to the model. The bridges are soldered in place, meaning everything is permanently fixed together. Consequently, the movement cannot be repaired, but it can be replaced. Unlike the plastic Sistem51 that had a back permanently fused to the case, the plastic back on the Sistem51 Irony can be removed to swap movements, meaning it should have better longevity. The visible solder spots to fix the balance bridge

Seven models are available – six for men and one for ladies – each with different dials and bezel variations.

The Sistem Arrow (ref. YIS403) has a baumuster B type dial, modelled on WWII German airforce navigator’s watches known as beobachtungsuhr. That’s combined with a brushed steel case and a notched bezel with black lacquer panels. Legible and fuss-free, the Sistem Arrow has an easy appeal. The next three watches have identical specs and polished cases, save for different dial finishes. The Sistem Earth (ref. YIS400) has a metallic silver-grey dial, with a combination of baton and Arabic numeral markers that give the dial a slightly confused look. The Sistem Soul (ref. YIS402) has a cream dial with black markings that are reminiscent of a compass rose. Novel but still appealing, the Sistem Soul also differs from the other watches in that the dial finish is a flat and matte. And the Sistem Fly (ref. YIS402) is a muted metallic blue, with the same design as Sistem Earth. Fortunately the striking shade of the dial makes it seem less cluttered than on the pale silver dial of the Sistem Earth. And the brighter blue lacquer filling on the bezel is a nice touch. One of two versions with a steel bracelet, the Sistem Boreal (ref. YIS401G) has a bright metallic blue dial with a geometric pattern that’s inspired by a compass rose. The top of the line Sistem51 Irony is the Sistem Tux (ref. YIS405G), what Swatch sees as the dress watch of the line. The case and bracelet are both stainless steel with rose gold accents; a two-tone finish is usually a sure way to make an inexpensive watch look expensive.

That being said, the dial of the Sistem Tux is the most interesting of the range, with a stamped wave-motif guilloche, what appear to be applied hour markers, and hands with a frosted finish. The final watch in the series is the Sistem Stalac (ref. YIS406G) for ladies. Launched slightly later than the men’s models, hence the lack of photos, the Stalac is nonetheless the same size at 42mm in diameter with the self-winding movement.

To make it feminine the bezel is set with crystals and the steel mesh bracelet is narrow and thin. This is priced at US$235 or S$330. Already available at Swatch stores, the Swatch Sistem51 Irony is priced at US$195 or S$279 for all models on straps (leather or rubber).