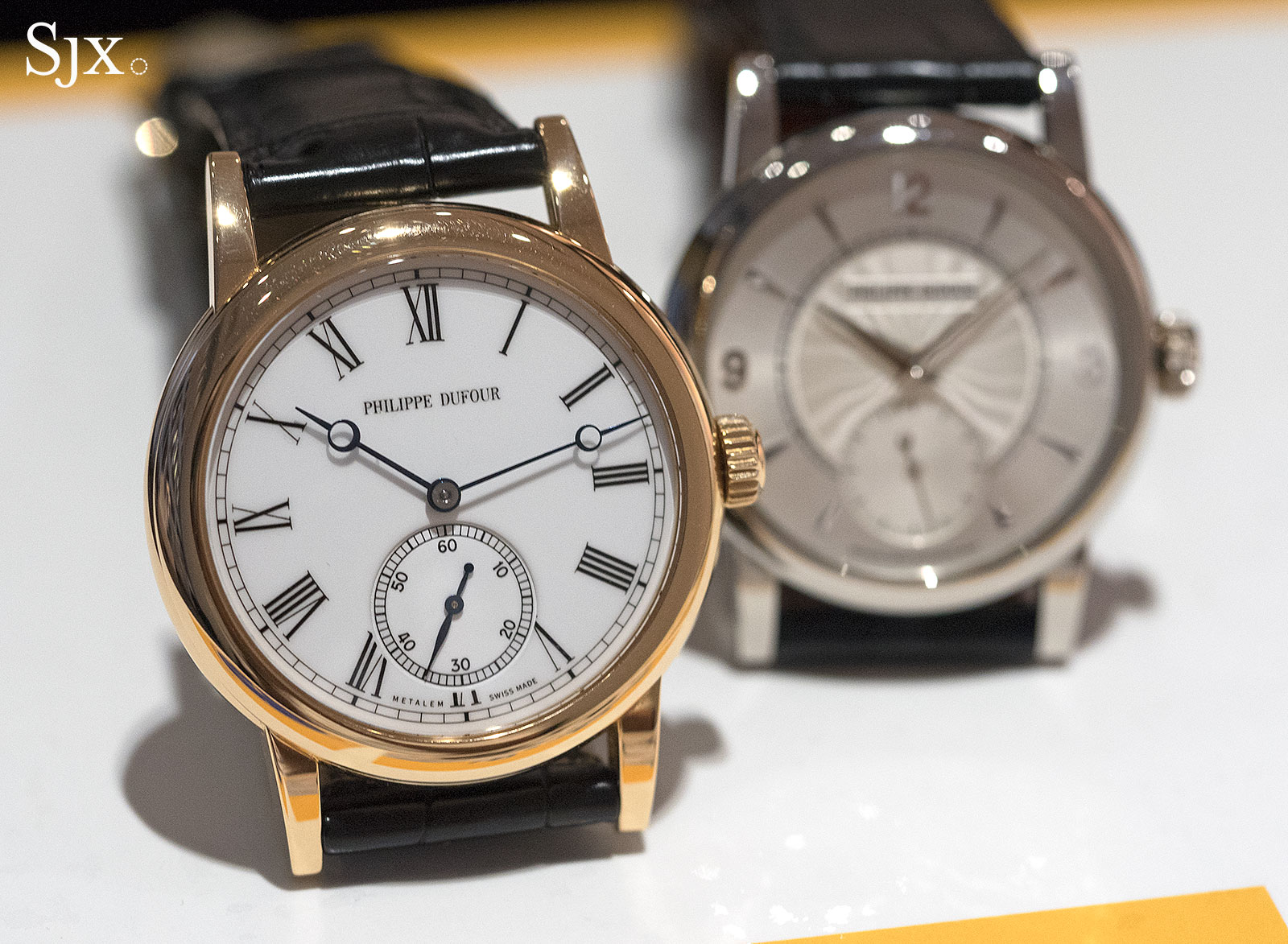 A masterpiece of modern watchmaking, with just 200 made – though a couple of extras have emerged in recent years –  the Philippe Dufour Simplicity has never come to market at an international watch auction, until now. Not one, but a pair, of Simplicity wristwatches will go under the hammers at Phillips’ The Hong Kong Watch Auction: Three at the end of November 2016.

The pair of Simplicities are also a primer on the entire range, the two watches encapsulate the variations of the Simplicity across its production run: 34mm and 37mm, white metal and rose gold, lacquer and guilloche dial.

The Simplicity was introduced in the year 2000, the result of Philippe Dufour’s desire to create the perfect simple wristwatch, one that was heavily inspired by mid-20th century timepieces of his native land, the Vallée de Joux. Dufour had already unveiled the much more complicated and expensive Grande Sonnerie wristwatch some eight years earlier, but it was the Simplicity that made him famous.

Today the Simplicity has become something of a unicorn eagerly pursued by collectors, even those who seek the Dufour name rather than his craft. That has elevated this simple wristwatch to a six figure value, some two to three four times its original price.

Both specimens of the Simplicity in the The Hong Kong Watch Auction: Three come from noted collectors in Asia. Each was a highlight in its owner’s collection, bearing the patina of use typical of a precious object that has been carefully worn. The movement is gorgeous, and slightly larger than that found in the 34mm model, having been redesigned to fit the larger case. And an unusual feature found only on a handful of Simplicity watches is the Philippe Dufour logo, in the form of an interlocking “PD”, engraved and gilded on the balance cock. The second Simplicity is a 34mm model in white gold, the exact same version Dufour made as the original prototype that he still wears today. Though small in comparison to many contemporary watches, the compact size is strikingly appropriate for a watch like the Simplicity. The dial is silver-plated with an engine-turned centre, arguably the quintessential Simplicity look. Arrowhead indices and dauphine hands give it the distinctive style of a high quality chronometer wristwatch of the 1950s. Though completely different from that on the rose gold model, the guilloche dial was made by the same company, Metalem, the Le Locle-based dial maker responsible for all of the Simplicity dials. Metalem is identified at six o’clock on all Simplicity dials, fairly unusual at the time, given that suppliers of components were then mostly anonymous. The view from the back is as gorgeous as that of the larger watch, though the movement fills the case slightly better given its larger size relative to the case diameter. The full catalogue for the sale will be available in mid October 2016.

The auction preview is open to the public daily from November 24 to 28, 2016 from 10am to 6pm at the Mandarin Oriental Hotel in Hong Kong. The Hong Kong Watch Auction: Three begins at 10am on November 29, 2016.

*The writer of this article has an interest in the sale of the 37mm Simplicity.