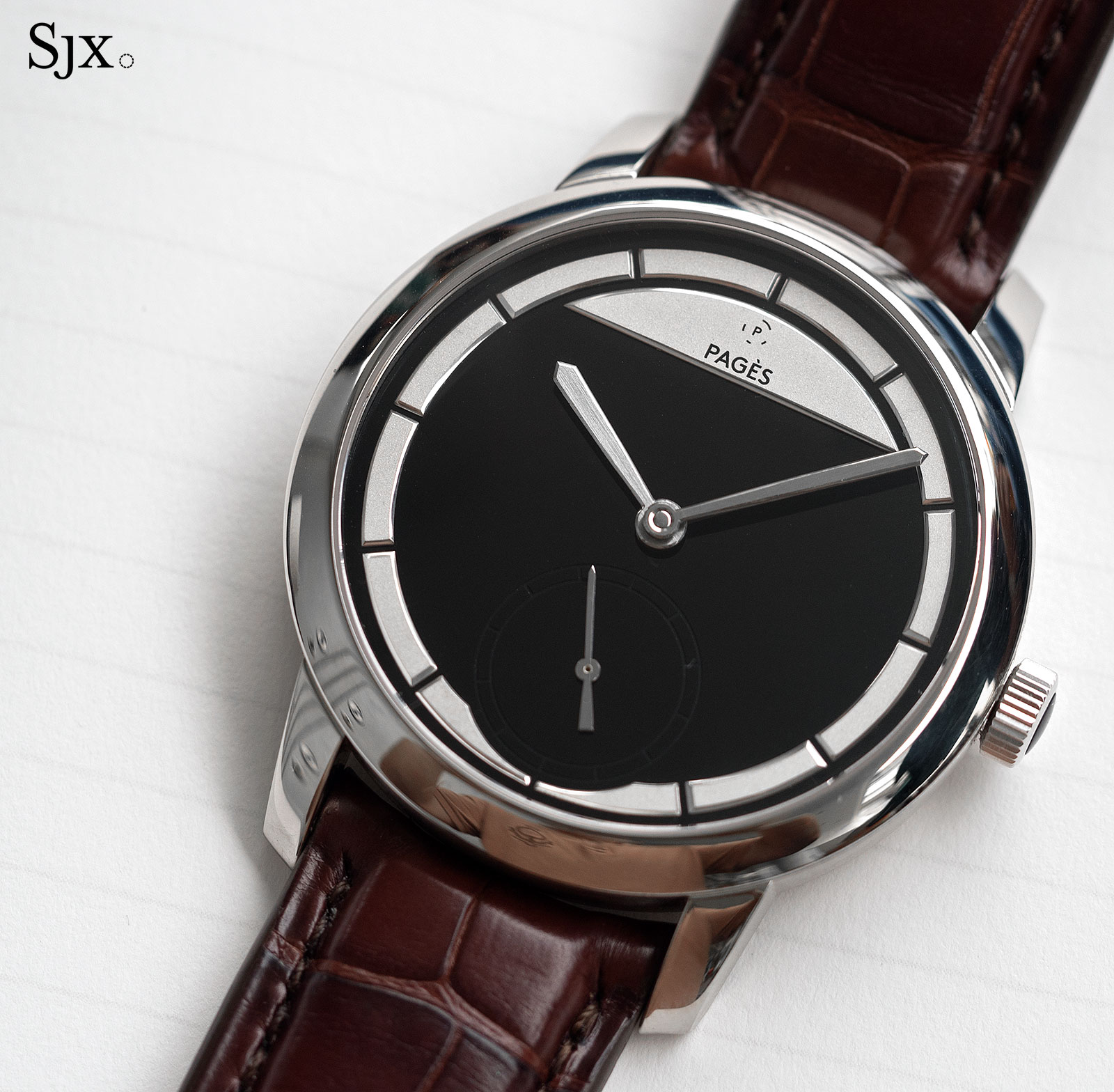 Raul Pagès’ first wristwatch is simply designed but elaborately finished, and equipped with a carefully decorated vintage movement – a familiar formula that’s also found in work of Voutilainen, and more recently, Atelier de Chronometrie. But the Pagès Soberly Onyx manages to differentiate itself in subtle ways.

The 34-year old Raul Pagès started his career with restoring antique timepieces, just like Voutilainen and Francois-Paul Journe did before him. Starting in 2006, Pagès spent four years in the restoration department of Parmigiani, one of the leading workshops in Switzerland dedicated to preserving historical pocket watches, clocks and automata. He then moved on to the Patek Philippe Museum in the same role, before striking out on his own.

His background in restoration explains his first mechanical creation, a gold and enamel tortoise automaton set with diamonds and sapphires, which when fully wound, slowly crawls across the table. Taking a year and a half to complete, the tortoise automaton is now on loan to the Watch Museum of Le Locle, located in the same town where a young Pagès studied watchmaking at the local technical college. Pagès’ unveiled the Soberly Onyx earlier this year, naming his wristwatch after the black gemstone used for the dial. Subtle but still distinctive, the design is style is inspired by Art Deco, resulting in clean, geometric shapes.

While the dial is polished onyx that’s mirror-like, the segmented inlays for the hours are white gold, finished like the components of a movement with frosted tops and polished bevels. The scale for the seconds at six is deeply engraved but mostly invisible, blending into the dial until the light catches it just right, an effect Pagès nicknames the “mysterious seconds”. While the dial is made by a specialist, the hands are of Pagès’ own creation. Made of steel, they are simple in form but cut, polished and hardened by hand. That said, even accounting for the height of the white gold inlays, the hands sit quite high on the canon pinion, so they seem to float about the dial; hands closer to the dial surface would have been more compelling. The watch appears modestly sized, despite being a good 40mm in diameter, a result of the widish bezel and dark coloured dial. But because it’s white gold, the case feels good in the hand, having enough weight.

Its rounded surfaces and corners are meant to evoke the shape of a tortoise, a reference to Pagès’ first creation. All four lugs are soldered onto the case, by hand evidently, obvious from the minuscule unevenness in the joint between lug and case band. The case is made by an case manufacturer, though Pagès makes the onyx-topped, white gold crown himself. The highlight of the Soberly Onyx, however, is over on the back. Turn the watch over and the sapphire case back reveals a movement that is both beautifully decorated and surprisingly large. Most modern wristwatches fitted with restored vintage calibres tend to have cases noticeably larger than the movement, sometimes disturbingly so. Pagès avoided that mismatch in size by using a small pocket watch movement, the Cyma calibre 586K that’s 33.8mm in diameter, large for a wristwatch. Made in the 1940s, the Cyma 586K is a hand-wound calibre typical of many movements of the era, traditionally laid out, robustly constructed, and equipped with a large balance wheel. Intriguingly this is not the first time the calibre has been resurrected: when Roger Dubuis first became an independent watchmaker in the mid 1990s, one of his first wristwatches was the Condottieri, powered by the nearly identical Cyma-Tavannes calibre 507. The large size and classical layout of the movement are appealing but the humble origin is a chink in its armour. Unlike the Peseux 260 found in the Voutilainen Observatoire or the Omega calibre 30 in Atelier de Chronometrie’s wristwatch, both of which are highly regarded, prize-winning chronometer movements, the Cyma calibre is less known, lacking the glamour of observatory chronometer status.

That being said, the splendid movement decoration is tangible. Pagès has decorated the movement to a uncommon degree, while preserving most of the original design and key components. Though the basic architecture remains the same, Pagès reshaped both the barrel and wheel train bridges – accomplished manually with a miniature hacksaw – to give them more pronounced inward angles to better show off the hand-bevelling on the edges. The prominent gold chatons holding the jewels – four on the bridges above and one on the anchor bridge – were made from scratch by Pagès.

All the bridges are German silver and original to the movement. The decoration, however, is new and unsparing, with a fine hand-applied frosted finish and impressively prominent edge bevelling. The bevelling, or anglage, has an notably shallow incline, making it seem wider than usual, giving a visual frame to the bridges.

All the countersinks for screws and jewels are similarly wide and polished. The same style of finishing – frosted top surface and polished bevels – is also found on the pallet fork bridge below the balance wheel. As the main plate is frosted and coated in black ruthenium, it recedes into the background, giving the bridges and gears greater prominence, and a pleasing, modern look. Importantly, the colour palette avoids getting overly creative, for instance by plating the bevels in contrasting colours to the bridge surface, preserving the feel of traditional watchmaking. One major upgrade to the original calibre that’s made from scratch is the elegantly shaped balance cock and balance wheel. Replacing the original screwed balance, the proprietary balance is even larger, with four-armed and gold regulating weights. It’s fitted to an overcoil hairspring that is hand-formed from vintage Nivarox wire that Pagès prefers since the modern hairspring material is no longer blued. Limited to 10 watches, the Soberly Onyx is priced at SFr48,000, or about US$49,200. It is also available in rose gold for the same price, while other customisation (for instance dial material or movement finishing) can done for an extra charge. The watch is available direct from Raul Pagès.