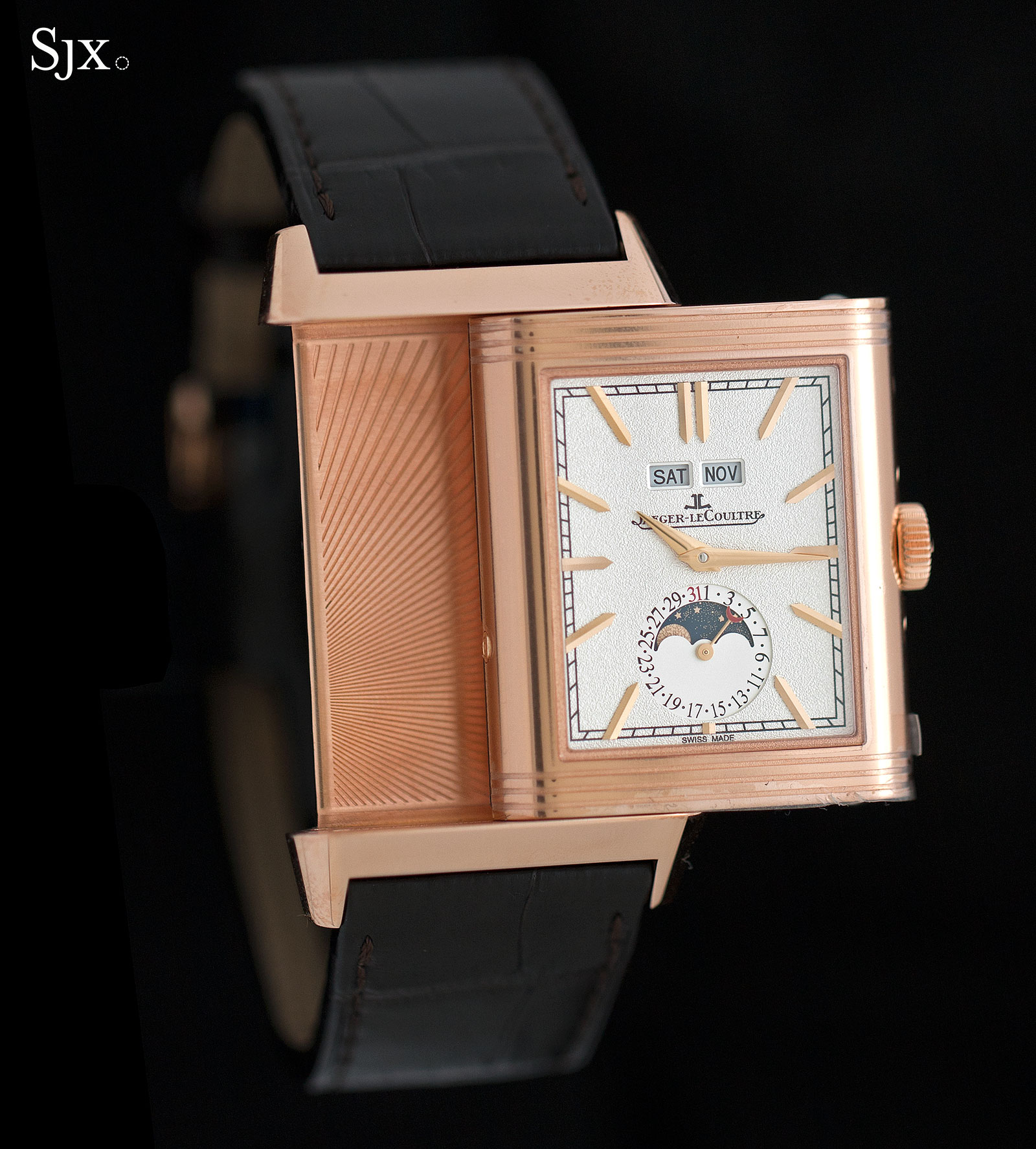 Jaeger-LeCoultre unveiled a suite of new Reverso wristwatches at SIHH 2016 (including the top of the line Gyrotourbillon), all sporting a facelifted look named “Reverso Tribute”. One of the highlights from the new line is the Reverso Tribute Calendar that combines two of the brand’s most popular complications: the double-faced dual time zone and the triple calendar.

The Reverso Tribute Calendar has all the hallmarks of the remodelled Reverso, namely dauphine hands, lance-shaped hour markers and a grained dial surface. While many recent Reverso watches were essentially vintage remakes (the Reverso 1931 Seconde Centrale or Chocolate for instance), the Reverso Tribute instead is a distinctly modern watch but one in historical dress, which might be a harder look to swallow for traditionalists. 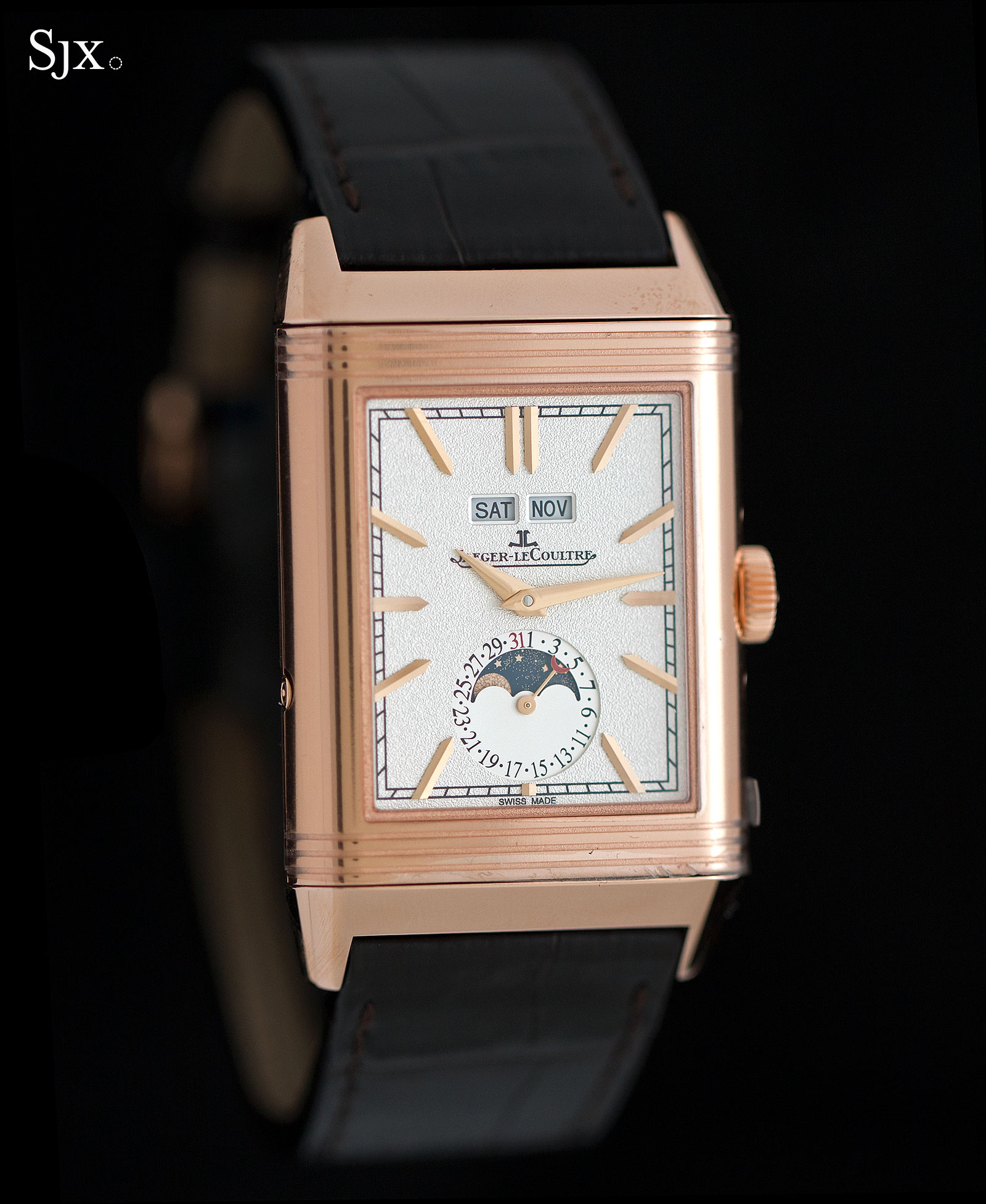 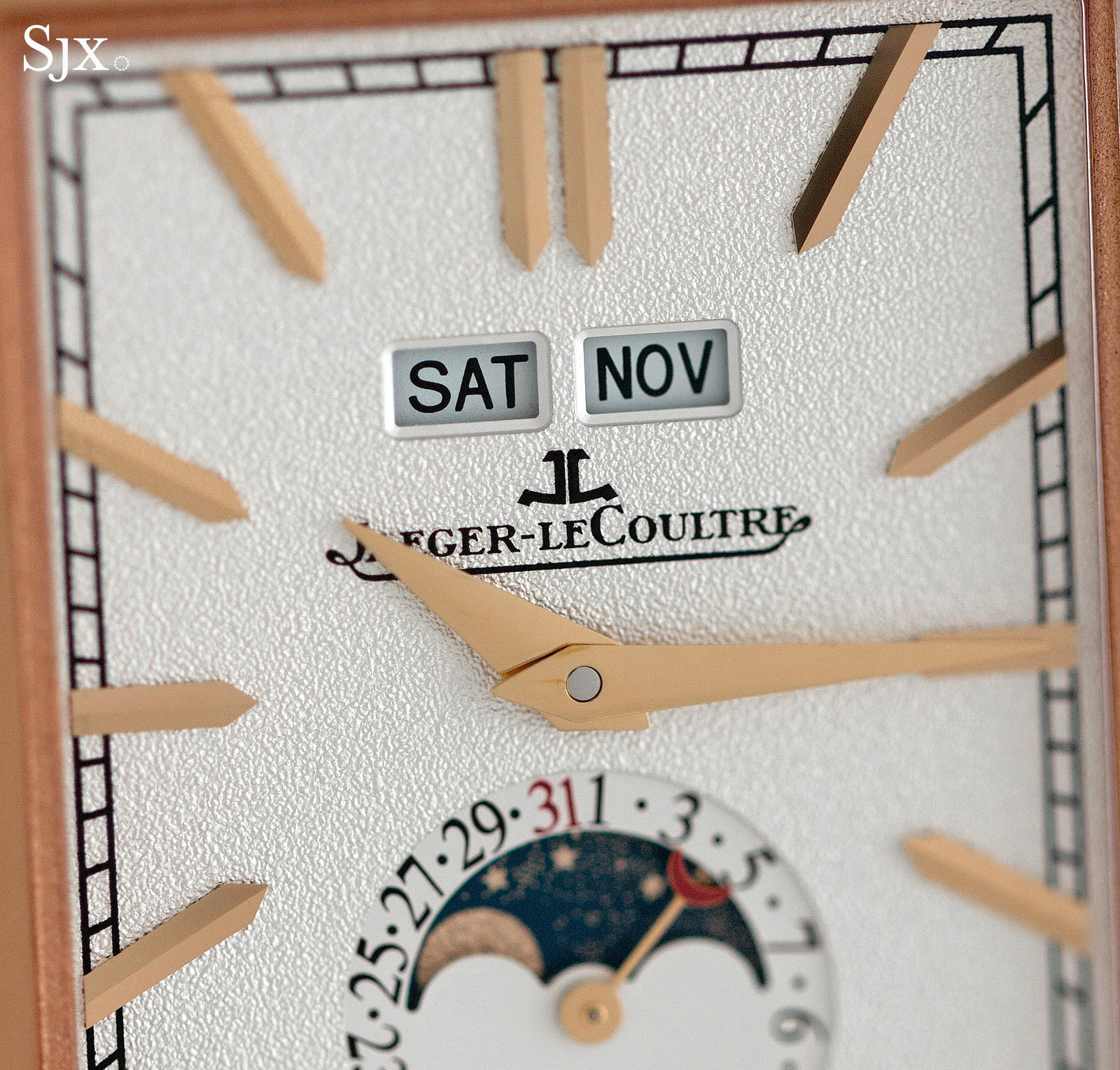 Laid out in the traditional manner with two windows and a pointer date, the triple calendar looks at home on the dial, though the indicators are small relative to the size of the face. The moon phase disc is worth pointing out as it’s fancier than average. The moon is an inlay of solid gold, hand-hammered to resemble craters on the lunar surface, while the rest of the moon phase disc is liberally sprinkled with stars. 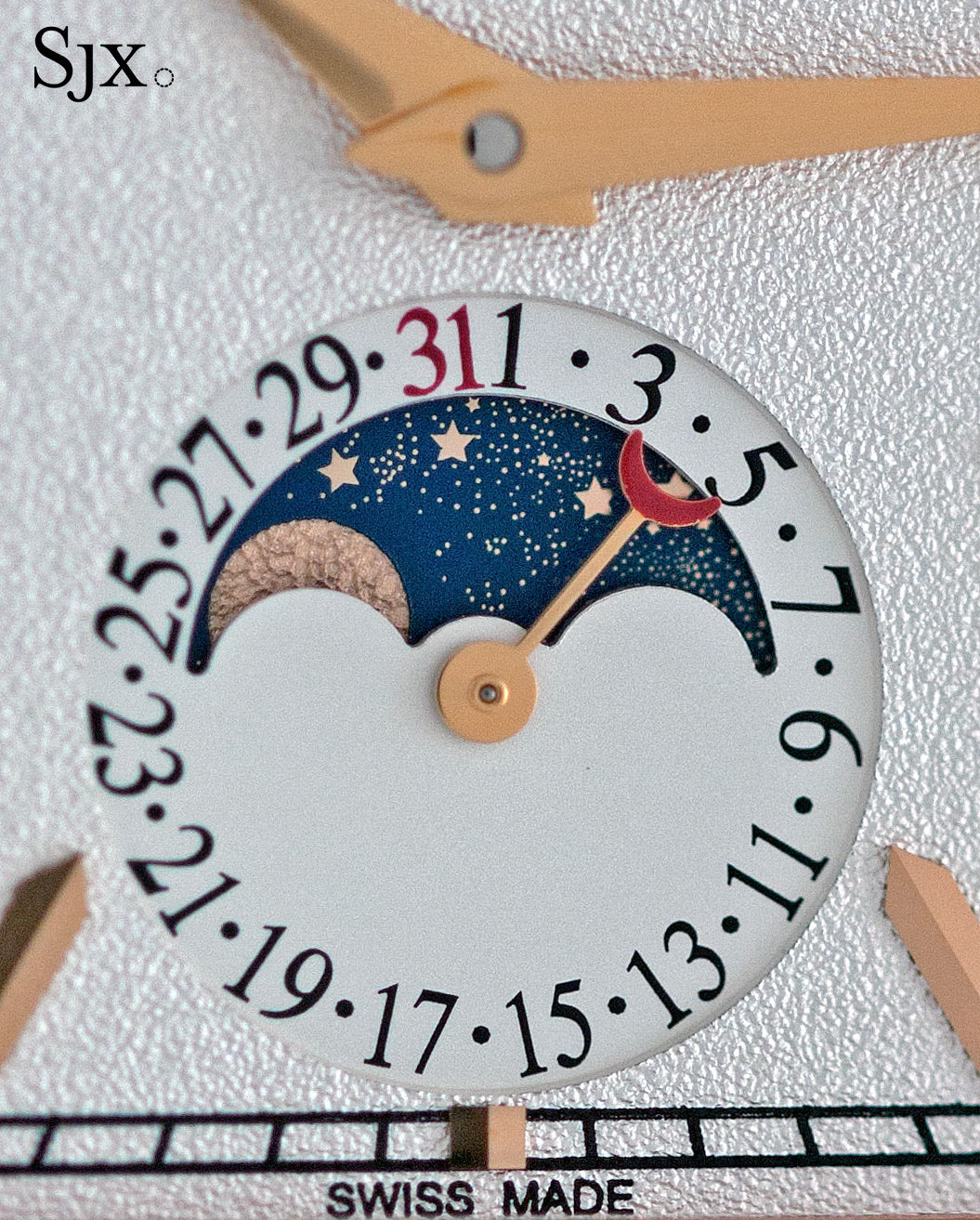 In dark grey with a hobnail surface, the reverse face is more muted, though it retains the same hands and hour markers as the front. It indicates home time, with the sun and moon disc to distinguish between night and day. 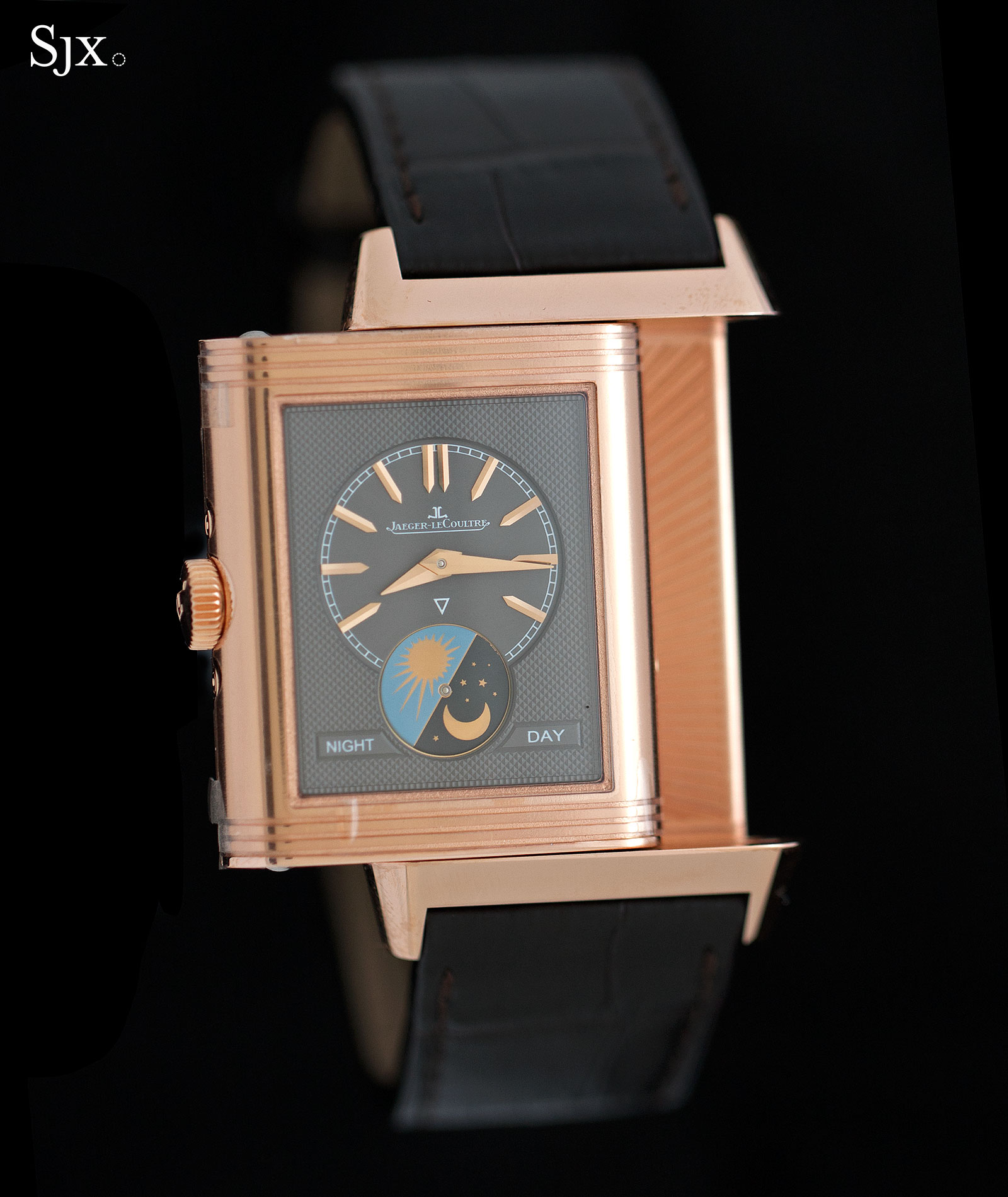 The movement inside is the hand-wound calibre 853, which is essentially the long standing calibre 854 with an triple calendar module on top and a modification for the time zone setting (more below). The calibre 854 was introduced over 20 years ago in the original Reverso Duo of 1994, and is itself based on the Jaeger-LeCoultre calibre 822. The 822 is even older, dating back to 1992. While that shows the latest Reverso is actually powered by a movement that’s nearly a quarter century old, it does also promise tried and tested reliability.

As is typical for calendar watches, recessed pushers in the side of the case are used to set the calendar, but the second time zone has a twist. Instead of a button as on the other Reverso Duoface watches, the Reverso Tribute Calendar features a slide hidden on the lower edge of the case. Pushing the slide advances the local time hand in one hour intervals. While the slide gives the case cleaner lines by eliminating a button, it is less convenient to use than a pusher. 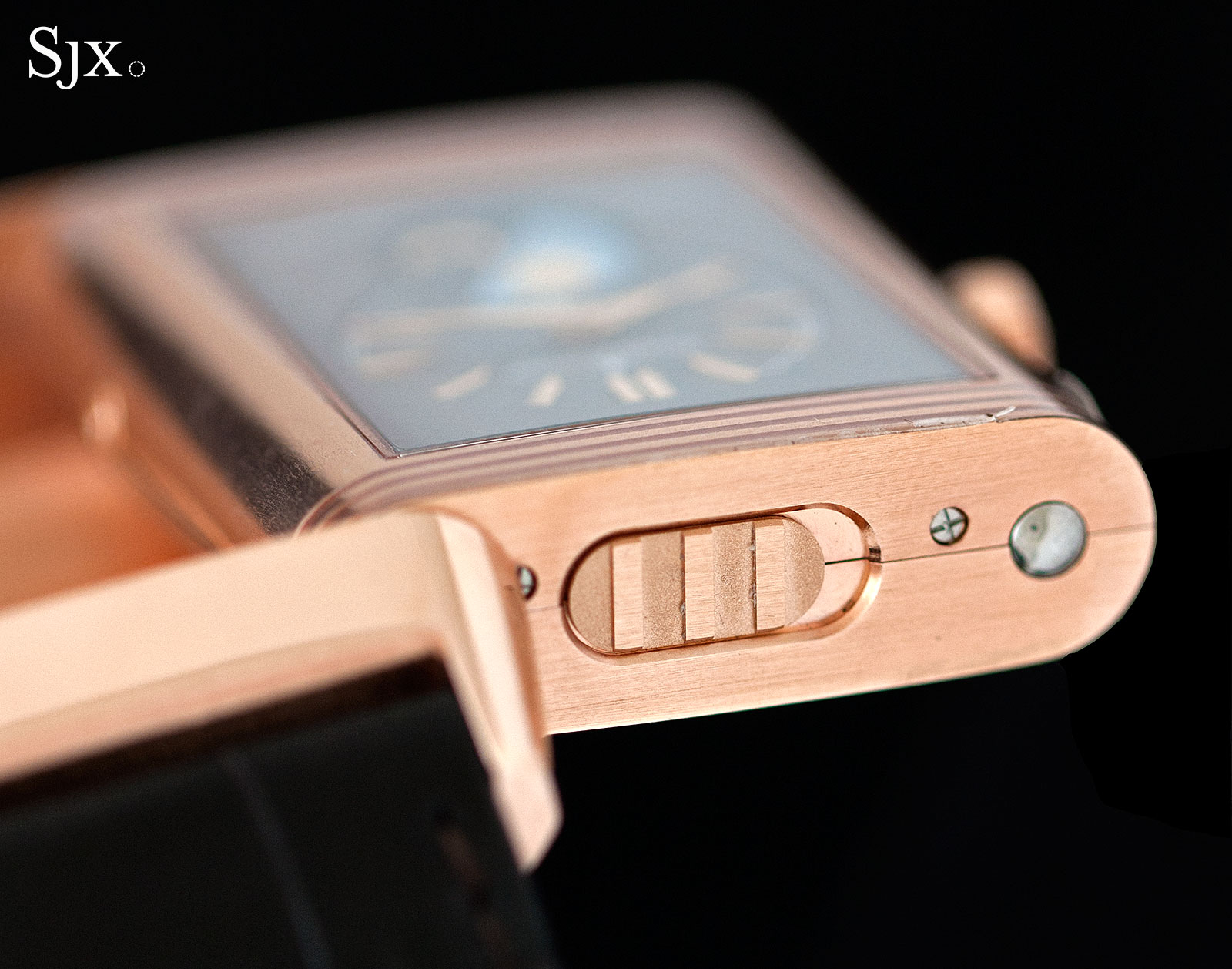 Another new feature of the case is the curved back, something common to all the recently unveiled Reverso Tribute watches. The flat back curves downwards at the ends, and when combined with the shorter lugs found on the new Reversos, improves the fit on the wrist.

That being said, the Reverso Tribute Calendar is still a large watch at 29.9mm wide and 49.7mm long, making it one of the largest Reverso watches in the collection. The size might not be suited for smaller wrists. 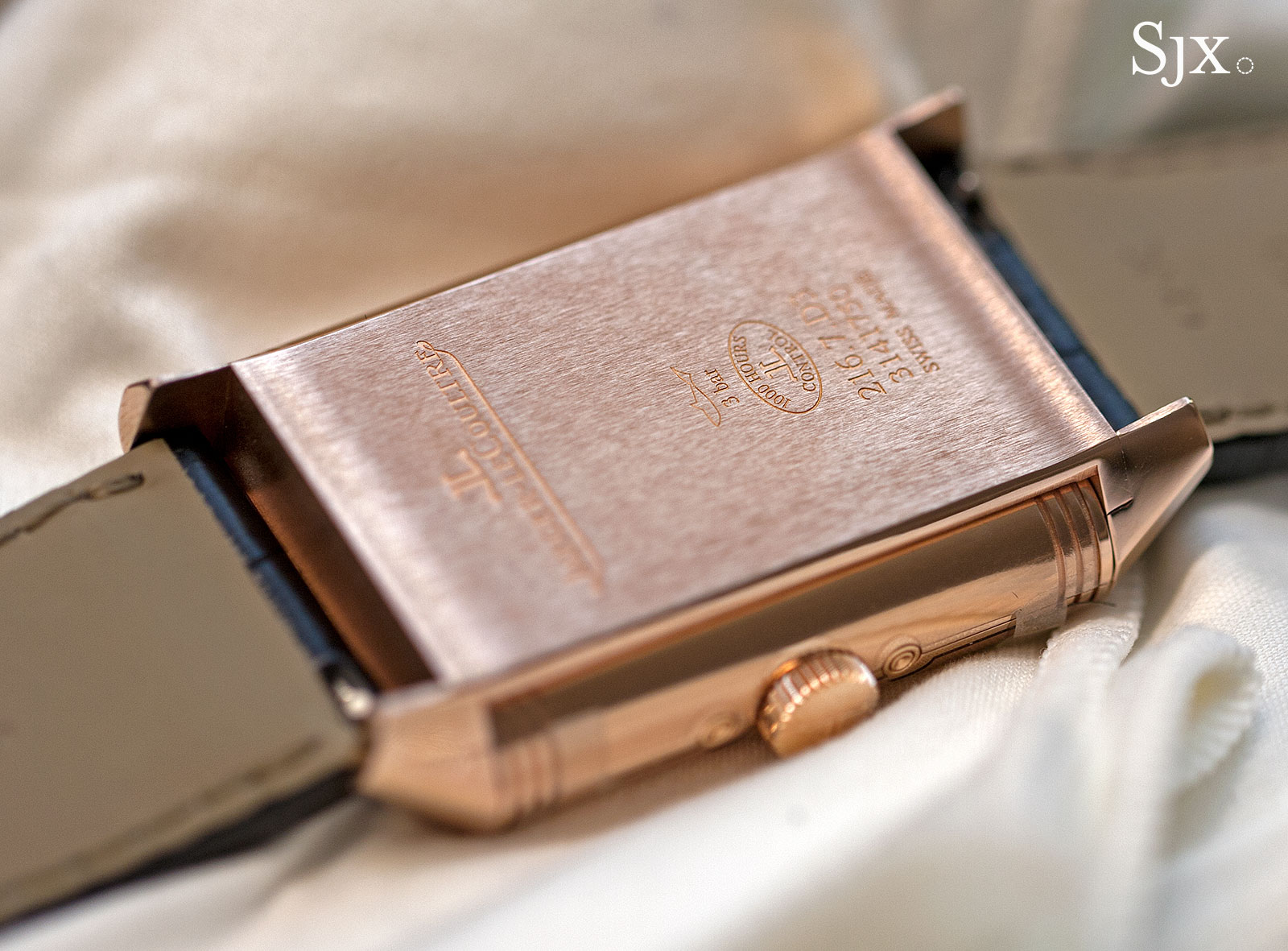 How Good is the Jaeger-LeCoultre Reverso Tribute Gyrotourbillon?

Neat, concise and wearable, the Reverso Tribute Gyrotourbillon is JLC's second try with a reversible multi-axis tourbillon. Here's a hands-on look with pricing.