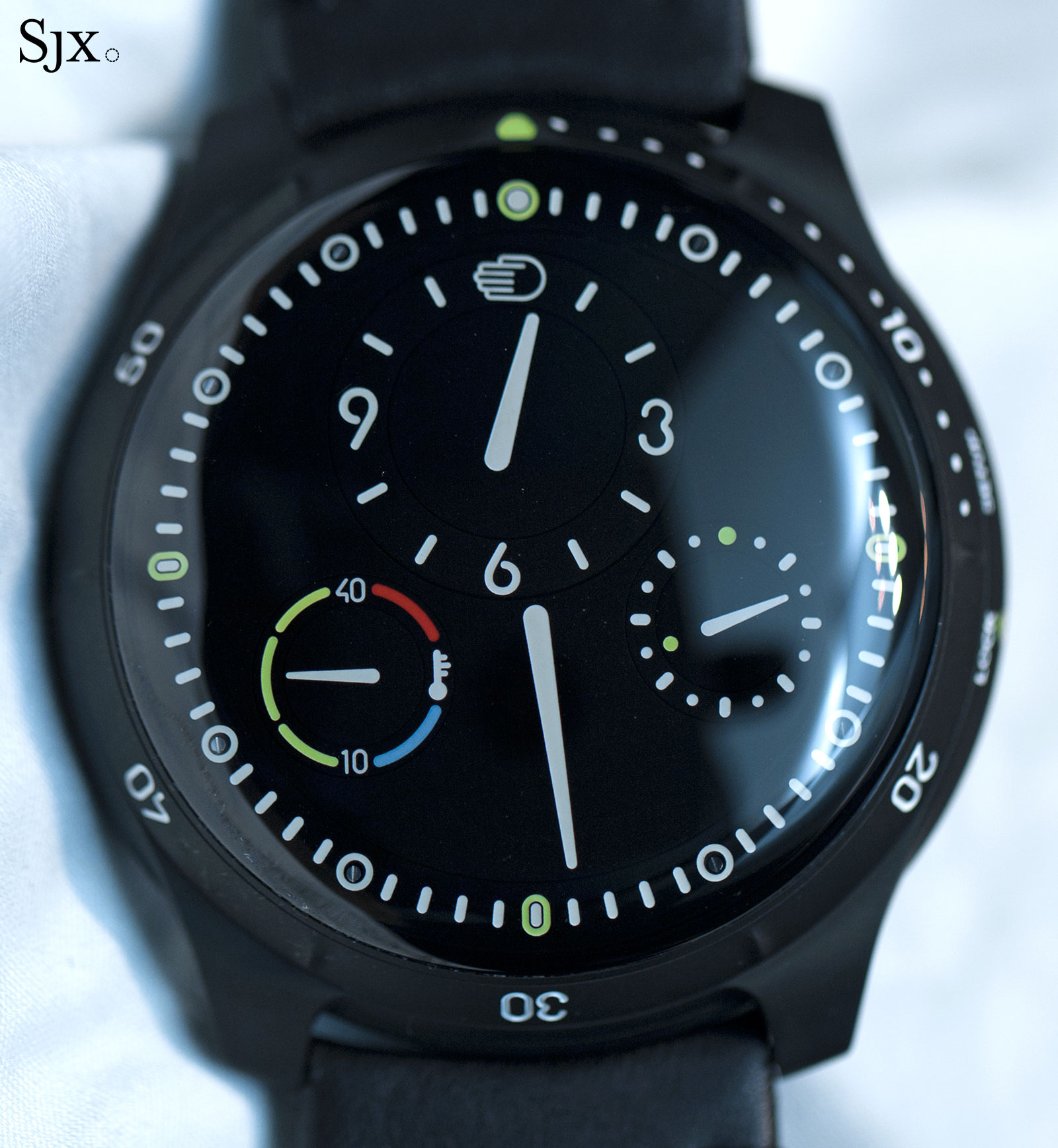 Ressence watches are difficult to grasp, being deceptively simple visually but with complex mechanics underneath. Since the brand’s founding in 2010, its timepieces have evolved to take the rounded, almost seamless form that characterise Ressence watches. Just introduced at Baselworld 2016, the Type 5BB is an all-black variant of its Type 5 dive watch. “BB” is short for “Black Black”, which describes the inky black dial and diamond-like carbon (DLC) coated case.

The brand’s unusual products set it apart from other watch brands, a quality that can be attributed to the fact its founder is not a watchmaker. Benoît Mintiens is an industrial designer with keen, clever ideas about watchmaking; the sort of person a watch nerd would appreciate. Based in the port city of Antwerp in Belgium, Ressence concentrates on design and prototyping, while manufacturing and assembly are done in Switzerland.

The brand’s slogan is “Beyond Hands”, explaining its signature planetary time display. The hours and seconds are indicated on sub-dials that rotate around the dial, while the minute hand is central. The coloured scale is a thermometer that indicates the temperature of the time display module, with green being optimal. First introduced with the New Type 3 last year, the thermometer is necessary because the time display module is filled with oil; a feature particularly handy for a dive watch as it removes any distortion or illegibility underwater. The optical effect of the oil renders the time display seemingly pressed flat against the domed crystal, even though the dial only slightly convex. But because the volume of oil changes with temperature, seven tiny bellows are incorporated into the time display module. These compensate for any change in oil volume, with the temperature gauge serving to indicate what the bellows are doing – red means the oil has expanded while blue means the oil has contracted. While the time display is strikingly clear, setting the time takes effort. That’s because the time display is inside a sealed capsule to keep the oil inside. There are no physical connections to the movement below, instead magnets are used for setting and driving the hands. A patented case back winding system eliminates the crown, but also renders challenging to set the time; while the Type 5 lacks a date, adjusting the date using the same setting mechanism on the Type 3 requires many, many turns of the back. And because the Type 5 is a dive watch, it also featured a locking system for the case back when not in use. But the result of the crown-less inconvenience is a watch case beautifully shaped, rounded like a pebble and unusually sleek on the wrist. While the pronounced size of the Type 5 diver – the diameter is 46 mm while it’s 15.5 mm high – gives it a substantial presence on the wrist, the watch is light and ergonomic. Rated to 100 m, the case is titanium, with a black DLC coating. The Type 5B diver in titanium

Intriguingly, and with a frankness that’s rare in high-end watchmaking, company founder Mintiens declares he wants to execute his watch concepts at a lower price so more people can afford it, an ambition he hopes to realise when his output increases.