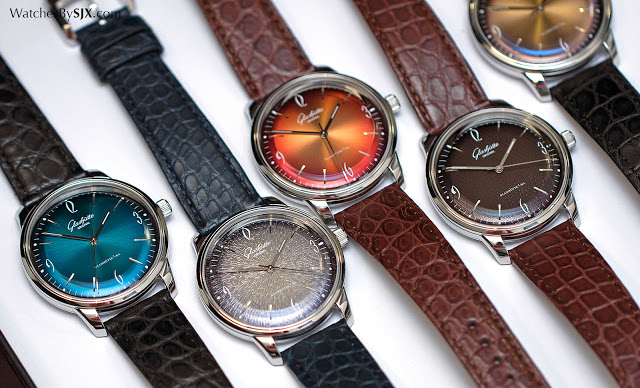 The Glashütte Original Sixties Iconic Collection looks like it was designed at East German party after the Berlin Wall came down, characterised by vivid dial colours and patterns that are entirely unique yet convincingly retro. And unlike many limited edition watches made in large numbers, the Sixties Iconic Collection was not announced as a limited edition, but only 125 will be made.

The Sixties Iconic Collection is almost a small run of prototypes, being the result of experiments at the dial factory recently acquired by Glashütte Original. Though the watches are not numbered as such, the Sixties Iconic Collection is actually genuinely limited, with just 25 in each colour according to Yann Gamard, the chief executive of Glashütte Original. That makes the total just 125 watches. Despite their intriguing colours, the Sixties Iconic watches are based on the sedate Senator Sixties, a watch modelled on the Spezimatic wristwatch. Made by the state-owned East German watch factory, VEB Glashütter Uhrenbetriebe (GUB), the East German Spezimatic look is faithfully reproduced with the Senator Sixties, though with the gloss and polish of a luxury good characteristic of capitalism.

Fittingly for a product made for members of the bourgeoisie, the Sixties Iconic Collection features dials that painstakingly made by proletarian workers. Each dial starts out as a brass blank that is either brushed with a radial finish or decorated with guilloche. It’s then covered with several layers of lacquer by hand, following by a final coat applied with a spray gun. Because the dials are coloured by hands, the effect is uneven, something labels a degrade effect, which translates as “degraded” in English. The dials are beautiful and unusual enough that the tiny inconsistencies in the finish give them character.  The shade of each dial varies according to the light, and most light up at just the right angle. All of them look brilliant on the wrist, especially the reddish-orange Sixties Red. The Sixties Golden and Sixties Aqua have a similar dial finish, but in hues that are more sedate than the Sixties Red. Sixties Aqua is finished in a rich blue that’s not quite electric, but more vibrant than most blues. The Sixties is more subdued, though the graduated chestnut colour evokes the memory of rich and sweet maple syrup. Guilloche with a 60-tonne press

The last two of the Sixties Iconic Collection both have guilloche dials with the motif stamped by a 40-year old press. Sixties Brown is the most East German of the line-up, with an Argyle  pattern reminiscent of wallpaper or clothing. Up close, however, the dial reveals the intricate structure of the guilloche that looks almost organic. Much more visually pleasing is Sixties Grey with a guilloche that’s reminiscent of raindrops on glass. It’s an irregular pattern that radiates from the centre, with the metallic grey colour darkening towards the edges of the dial. While the dials are unique, the case and movement is identical to the that in the ordinary Senator Sixties. The case is stainless steel with a 39 mm diameter, making it larger than the East German Spezimatic that inspired it, but nonetheless a modest size by modern standards. Mirror polished all round, the case is fitted with a domed sapphire crystal on the front to complete the vintage aesthetic. The crystal on the back is also domed, revealing the calibre 39-52 from the top and also the side. Self-winding with a solid gold mass on the rotor, the calibre is in-house like all of Glashütte Original’s movements. It’s decorated attractively (albeit by machine), and is as good as the best in the same price segment. Each model of the Sixties Iconic Collection is priced at €6300 (or S$11,400 in Singapore), and the range is available only at Glashütte Original or Tourbillon boutiques (the latter being the stores dedicated to high-end watchmakers owned by the Swatch Group).

A striking departure from the typical Glashütte Original look, the Sixties Iconic Collection is made up of five timepieces with psychedelic dial colours that are limited to just 25 pieces each. We take a look at the line-up, with review, photos and price below. 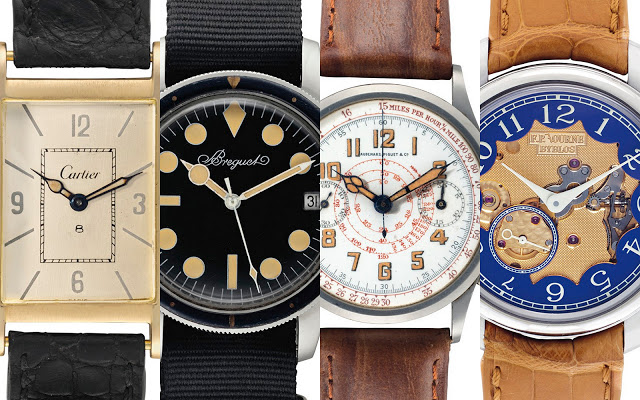 Christie’s will close the year with Rare Watches and Important Discoveries, the watch auction that will take place in New York on December 16, 2015, with nearly 200 lots on offer. Christie’s last watch auction of the year takes place at Rockefeller Centre in New York on December 16, with the Omega Speedmaster Moon Watch thematic auction the day before. With just under 193 lots, the sale is relatively small, but offering an diverse line-up of timepieces, ranging from singular vintage timepieces to contemporary haute horlogerie. Here’s a look at five highlights. Lot 24: The F.P. Journe Chronometre Bleu Byblos, one of a limited edition of 99 pieces made for the opening of the brand’s boutique in Lebanon in 2014 (you’ll find more details in our original story introducing this watch). A variant of F.P. Journe’s entry-level wristwatch, the Byblos is distinguished by its open dial that reveals the solid gold engine-turned base plate of the movement. This is the first Byblos to go under the hammer, with an estimate of US$20,000 to US$40,000. If it sells above the low estimate, that would mean this is one of the few watches of recent years to have appreciated rapidly in value. Lot 77: An exceptionally rare Cartier wristwatch with eight day power reserve, powered by a hand-wound LeCoultre movement inside a rectangular case. Not exactly a Tank wristwatch (because of the downward curved lugs) but similar in form to the Cartier classic, this timepiece is one of only a handful of Cartier form watches with an eight day power reserve. This particular specimen dates from 1940, and similar watches from the period have sold at auction for over US$100,000 in recent years. But unlike similar examples seen before, this has a dial with luminous markers and hands. The estimate is US$40,000 to US$60,000. Lot 120: A Breguet diver’s watch that was sold in 1962, one of perhaps 60 made. Only three have made it to market so far, with the last one having sold at Christie’s earlier in 2015 for just over US$100,000. The look is typical for dive watches of the era, but completely different from the usual Breguet. The bezel is bakelite, and the movement inside is a self-winding A. Schild calibre. This is estimated at US$60,000 to US$80,000. Lot 155: Something for the value seeker, a Ulysse-Nardin monopusher chronograph, made for the brand’s 175th anniversary in 1998. Featuring a pulsometer dial modelled on a vintage pocket watch, its best feature is the movement inside. Hand-wound with a single button for the chronograph, the calibre was created by Techniques Horlogères Appliqués (THA), a complications specialist founded by F.P. Journe, Vianney Halter and Denis Flageollet. This same movement was also used by Cartier, Franck Muller and De Bethune. With an estimate of US$8000 to US$12,000 and no reserve, this could be a bargain. Lot 161: A very, very rare Audemars Piguet chronograph in stainless steel made in 1937. Despite the proliferation of modern Audemars Piguet chronographs (think Royal Oak Offshore), its vintage chronographs are extremely rare, with Audemars Piguet having made only about 300 in total from 1930 to 1950. This particular example boasts a combination of rare features: the stainless steel case (a somewhat small 32.5 mm, its only drawback) , white enamel dial with telemeter and tachymeter scales in red, cathedral hands, as well as beautifully aged radium. This watch comes to Christie’s from the de Guignes, a prominent family in San Francisco. The estimate is US$40,000 to US$60,000. The complete catalogue is available from Christie’s.