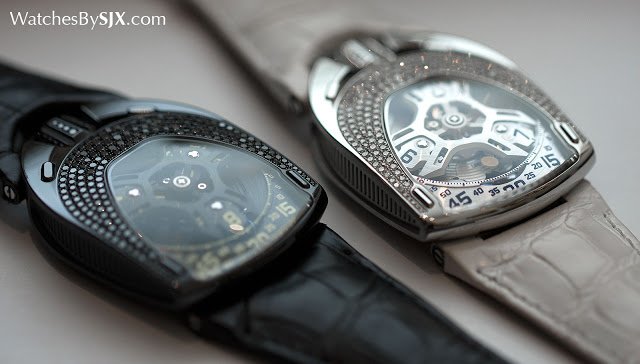 Urwerk’s official entry into the world of ladies’ watches, the UR-106 Lotus combines Urwerk’s signature satellite hour display with a sleek, feminine case set with diamonds as well as a moon phase disc made of lapis lazuli. Famous for its masculine timepieces with avant-garde time displays, Urwerk has for the first time created a wristwatch for ladies. The UR-106 Lotus tells the time with a wandering hours, a mechanism first used in the watch that made Urwerk famous, the UR-103.  In contrast to the aggressively styled cases typical of Urwerk – the UR-210 “Full Metal Jacket” being a good example – the UR-106 Lotus has gently curved lines, with diamonds set in a semi-circle around the crystal and on the crown. Notwithstanding the case decor, what really catches the eye is the detail inside the satellite hours mechanism. Available in two finishes – polished steel or black coated steel – the Lotus is limited to 11 pieces in each guise. The self-winding movement uses the Zenith Elite as a base, with the satellite hours time display mechanism built on top of it. While the UR-106 tells the time in a similar manner to the UR-105, and even uses the same Zenith base movement, the movements are completely different. The UR-106 has three satellite discs that travel around the dial (the UR-105 has four), showing the hours and pointing to the minutes on the track across the lower edge of the watch. Just above the minute track is a moon phase display, with the disc made of lapis lazuli. Seemingly a solid circle, the moon itself is actually a maze motif inspired by the hedge mazes found in European palaces, with a tiny flower at its centre.

All the details of the mechanism really stand out on the steel Lotus; the black coated model allows few details to stand out. Made of ARCAP, an alloy with high tensile strength and corrosion resistance, the plate covering the hour carrousel is finished with a brushed finish featuring a large grain. It is particularly striking, and the same finish is found on each of the hour satellites as well as the carrousel that carries them. The same coarse brushed finish is also used for the minute track. That paradoxical industrial yet refined aesthetic is enhanced by the circular milled pattern on the base plate below. Another intriguing detail is the minuscule bridge of the minute track that runs from the 20 to 40 minute mark, suspended above the cut-out for the moon phase. It’s a remarkably delicate feature, standing in contrast to the large components of the satellite display. The diamonds set on the case flow in a circle from one corner of the case to the other, terminating at the bolt that holds the two halves of the case together. Another two bolts sit on either side of the crown, which is also set with diamonds. While the front of the watch is steel, the rear is titanium with a sandblasted finished. The centre of the back features a recessed motif that’s a stylised centre of a lotus flower, which will be where the limited edition number will be engraved. And designed specifically for ladies is the slide on the case back that raises the crown. This allows the time to be set without having to pull the crown, a task that might chip a delicately painted nail. The UR-106 Lotus measures 35mm in diameter and 49.4mm from top to bottom, with a case height of 14.45mm. It’s the smallest Urwerk in the current collection, but not by a large margin. In fact, its dimensions are only just smaller than those of the UR-103. Jaquet Droz has applied its minimalist design philosophy to a new price segment with the Grande Heure Minute Quantième its new entry level timepiece with steel case in two sizes, 39mm or 43mm.

For the first time Speake-Marin has created a ladies' wristwatch with the Shenandoah, featuring an oval case with a fuss-free quartz movement inside.