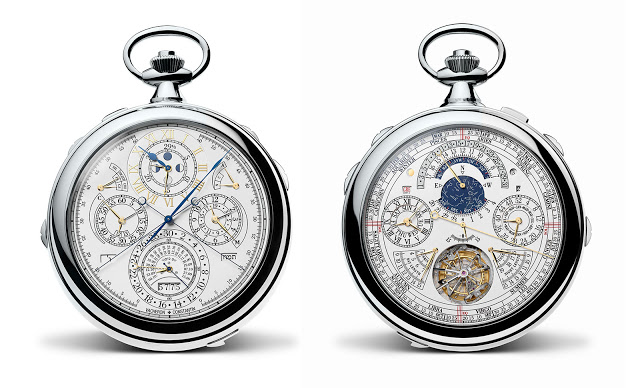 The last time a timepiece set the record as the most complicated ever, the Berlin Wall was about to come down. George H.W. Bush had just become president of the United States and Nelson Mandela was still in jail. That was 1989.

Now that record has been broken by Vacheron Constantin with the Reference 57260 “Tivoli” with an astounding 57 complications – the model name is a combination of the number of complications and that brand’s 260th anniversary in 2015. Eight years in the making and unveiled on the 260th day of the brand’s 260th year, the Tivoli pocket watch is a bespoke timepiece commissioned by an anonymous client who wanted the most complicated watch ever. He got what he wanted.

Housed in an enormous white gold case, the Tivoli is a double-faced pocket watch that includes a double retrograde split-seconds chronograph, three different perpetual calendars (including a Hebrew calendar), a five-gong grande and petite sonnerie, star chart, world time and triple axis tourbillon. The watch is 98mm in diameter, over 50mm high and weighs just under 1kg. And the movement inside comprises over 2800 components, while both faces have a total of 31 hands.

The Tivoli is another creation of Atelier Cabinotiers, Vacheron Constantin’s workshop specialising in custom timepieces, the same people responsible for the impressive Coffret Observatoire, a five-piece set of pocket watches with tourbillon regulators equipped with vintage movements.

Though Vacheron Constantin has kept mum about the price, with the Coffret Observatoire costing over US$4 million, the Tivoli would cost well over US$10 million, and possibly close to US$20 million. The 57 complications of the Reference 57260 “Tivoli” bests the last record-setting grand complication by a significant margin. Made in 1989 for the firm’s 150th anniversary, the Patek Philippe Calibre 89 had 33 complications.

Notably, the Reference 57260 “Tivoli” makes its debut just shy of one year after the Patek Philippe Graves Supercomplication sold for US$24 million. When the Graves was first sold in 1932, it was the most complicated timepiece ever. Like the ultra-complicated bespoke wristwatch Vacheron Constantin introduced in 2014 (perhaps as a warm-up), the Reference 57260 “Tivoli” has two faces, both made of solid silver, necessary to accommodate the numerous displays. The front indicates the time regulator-style, with the hours, minutes and seconds on separate sub-dials. It also contains the displays for the chronograph, Hebrew perpetual calendar and indicators for the chiming and alarm functions.

On the reverse the second dial is dedicated to the astronomical display, double perpetual calendar (the conventional Gregorian calendar and the ISO 8601 business calendar), world time and a triple axis tourbillon.

The first of its kind, the double retrograde rattrapante chronograph has two co-axial seconds hand in the centre, just like a conventional split-seconds chronograph. Each hand can record an elapsed time of up to a minute.

But instead of a circular elapsed time register, each hand travels on a vertical semicircular retrograde scale across each edge of the dial. Registers at three and nine o’clock are the 12-hour and 60 minute counters respectively.

The Hebrew calendar is based on the 19-year Metonic cycle, with 19 years being the common multiple of the lunar month and solar year. This is indicated on the sub-dial at three o’clock indicates this, with the hand making one revolution every 19 years. Other Hebrew calendar indications include the windows on either side of the six o’clock register that indicate the number of days and months, as well as the secular Hebrew year calculated from the creation of the world in 3760 BC (it’s now 5775 years since then).

Grande and petite sonnerie with alarm

The Tivoli pocket watch has a five gong striking mechanism that can replicate the Westminster Quarters of Big Ben, the clocktower at the Houses of Parliament in London. It can be set to striking mode, meaning the watch chimes as the time passes at each quarter and top of the hour. A more novel feature is the night-time silence mode which stops the striking mechanism between 10:00pm and 8:00am, before resuming the chiming during the daytime. And it is also equipped with an alarm function that either sounds as a traditional alarm, single tone chime or the Westminster Quarters.

The rear contains a star chart (at 12 o’clock), while the months of the year, Zodiac signs and four seasons are indicated on the scales on the edge of the dial. Equation of time, sunrise and sunset

A fan-shaped display above the tourbillon indicates the equation of time, the difference between mean solar time (the 24 hour day shown on watches) and true solar time (based on the Earth’s elliptical orbit of the sun). Sunrise and sunset are shown on either side of the tourbillon.

This is shown on the sub-dial at nine o’clock, with the cities disc for the 24 time zones just above, while the day and night indicator is located at 10 o’clock. The rear also shows two different calendars. The first is the Gregorian calendar, the conventional calendar used throughout most of the world. The second is the ISO 8601 calendar based on the 52 weeks of the year and day of the month, most often used in technology, like electronic television programming and internet calendars. This is indicated on the sub-dial at three, with the day of the week just above it. Named for its resemblance to an astrolabe, the triple axis tourbillon has an outermost cage made of aluminium shaped like the Maltese cross, the logo of Vacheron Constantin. As the tourbillon makes its one minute revolution, the Maltese cross comes into full view every 15 seconds. Most multi-axis tourbillons have been conceived for wristwatches, to average out gravitational errors on a constantly moving wrist, while a pocket watch is typically stationary in the vertical position. In addition, the hairspring is spherical in shape, a variation of the cylindrical hairsprings employed in marine chronometers for more concentric motion regardless of its position. And the escapement has diamond pallets for the anchor, instead of the typical synthetic ruby.

Lunar Calendar
31. Phases and age of the moon, one correction every 1027 years

Religious Calendar
32. Indication for the date of Yom Kippur

Luxury conglomerate Richemont reported “robust” growth, primarily thanks to demand in Europe and Japan, as well as strong sales at its own boutiques, with jewellery outperforming watches.

Richemont, which owns brands like Cartier, IWC and Jaeger-LeCoultre, saw its sales increase 4% for the five months to August 2015, excluding gains from fluctuating exchange rates. A seemingly modest figure, but respectable given the overall climate in luxury watchmaking.  The Swiss luxury group formally known as Compagnie Financière Richemont SA reported its five months results on September 16 during its annual general meeting. Here are the key takeaways from its results: – Europe and Japan performed best. European sales were driven by tourists and up by 26%. Revenue in Japan was up 48%, helped by sales to tourists thanks to a weak yen. – Described as “extremely challenging”, sales in Asia Pacific was down 18%, with sales in Hong Kong and Macau “significantly lower”, continuing the trend. Chinese sales, however, were up at Richemont’s own boutiques. – Sales at Richemont’s own stores were up 14%, but sales to its retailers were down 6%. This indicates that luxury watch retailers are reducing their inventories and not replenishing them, expecting the slowdown to persist. – Sales at its jewellery division (namely Cartier and Van Cleef & Arpels) were up 6%, compared to a 1% drop for watches. Richemont’s watch brands, including names like A. Lange & Söhne, Panerai and Vacheron Constantin, “suffered from weak demand in the Asia Pacific region”. – Montblanc was cited for its positive performance, meaning chief executive Jerome Lambert’s turnaround is working.