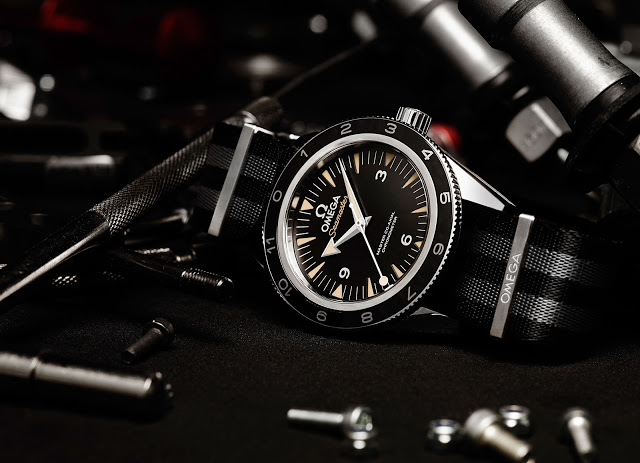 In earlier films, the watch worn by James Bond was slightly different from what was available to the public. The Seamaster Planet Ocean Skyfall limited edition for instance was  steel, while Craig wore a one-off titanium Planet Ocean that was later auctioned for charity.

When SPECTRE hits the big screen on November 6 (trailer at bottom), Craig will be wearing the Seamaster 300 SPECTRE. Three differences distinguish this from the regular production model. One is the ceramic bezel insert with a 12-hour scale that can track a second time zone, instead of an elapsed minute bezel. And the other is the “lollipop” seconds hand, named after its circular tip. A feature found on the earliest variants of the vintage Seamaster 300, the lollipop was later replaced by an arrow-shaped seconds hand, which is also found on the regular production model. Less obviously, an enlarged Omega logo replaces the “12” marker. In addition to the steel bracelet, the Seamaster 300 SPECTRE is also delivered with a NATO strap in grey and black stripe, similar to the colours of the band on Sean Connery’s Rolex in Dr No, first James Bond film. The buckle of the NATO strap is engraved with “007”. The rest of the watch is identical to the ordinary Seamaster 300: 41mm steel case with the Master Co-Axial calibre 8400 inside. Like the other Master Co-Axial movements, it has the silicon Si14 hairspring and magnetism resistance of over 15,000 Gauss. Because the magnetism resistance is due to materials rather than a soft iron shielding, the movement can be seen through the sapphire back. Notably, this is the second limited edition Omega has made for SPECTRE, the first being the Aqua Terra limited edition unveiled earlier this year to get the fire going before the film opens.  The Seamaster 300 SPECTRE is priced at SFr6300 or S$9800. This will hit stores in September. One of the four models the revived A. Lange & Söhne introduced on October 24, 1994, the Tourbillon Pour le Mérite was the first ever wristwatch with a chain and fusee mechanism. While the Lange 1 was arguably the most distinctive watch, the Tourbillon Pour le Mérite was the flagship of the collection, named after one of Germany’s highest orders of merit. It was proof that the newly established firm could do as well as any Swiss watchmaker.

As Lange ascended into the top ranks of high horology watchmakers over the last two decades, the Tourbillon Pour le Merite has naturally become a sought after and valuable collectible, selling for over three times its original retail price at auction, with unique variants going for even more. But the question has to be asked: how good is the Tourbillon Pour le Mérite, especially compared against contemporary watchmaking?

Symmetrical with Arabic numerals and a railway minute track, the Tourbillon Pour le Mérite was actually the first of the 1815 family, named after Ferdinand Adolph Lange’s birth year. Now one of Lange’s key collections, the 1815 line-up includes the recent F.A. Lange 200th Anniversary limited edition. The look is inspired by 19th century Lange pocket watches, right down to the triple dot minute markers at each quarter. The case style is typical Lange, with soldered lugs and a brushed case band. A large watch for its time, the standard Tourbillon Pour le Mérite case was 38.5mm, though one example has emerged with a 36mm case (and selling for €330,000 in 2012). Only 200 were made in total, with 149 in gold cases (19 in white gold, 15 in rose gold and the rest in yellow gold), 50 in platinum, and one in steel for Milanese retailer Orologeria Pisa. The watch pictured here is one of the platinum examples.

Unveiled alongside the Arkade, Lange 1 and Saxonia in 1994 at Dresden Castle, the Tourbillon Pour le Mérite was the unquestioned star, being far more complicated and expensive. The movement was developed together with Renaud & Papi (APR&P), the Audemars Piguet subsidiary that specialises in constructing complicated movements. APR&P made the raw movements for Lange, which then completed, finished and assembled them in Glashütte. Like all the other early Lange movements, the L902.0 in the Tourbillon Pour le Mérite was essentially a scaled down version of a pocket watch movement. Charming, anachronistic features not found in wristwatches before were implemented for the first time, like the diamond endstones for the tourbillon, and more famously, the chain and fusee.

A great novelty at the time, the chain and fusee (an old-fashioned constant force mechanism for the barrel) is now a feature in several of Lange’s top of the line watches, including the Richard Lange Tourbillon Pour le Mérite. An oft told story is how APR&P solved the problem of making the minute links of the tiny chain: silk thread was inserted into between the links to maintain the gaps, and then burned to remove it once the chain was complete. But the chain and fusee is no longer unique to Lange, with several other brands having done the same, including Zenith and Romain Gauthier. And the 1815 Tourbillon introduced last year uses a variant of the calibre L902.0 from the Tourbillon Pour le Mérite, but with the seconds, power reserve indicator as well as chain and fusee removed. In fact, the decoration on the L902.0 is akin to that of a cottage industry independent watchmaker, rather than an established brand. Not all that surprising, since Lange was essentially a start-up in the mid-1990s.

The basis for that conclusion is the unevenness of the movement finishing. Take for instance the three-armed tourbillon cage (modelled on Glashütte watchmaker Alfred Helwig’s 1930s design) with a rounded, black polished frame. The rounding is inconsistent, particularly at the pointed ends. And the finishing on the underside of the cage is not as fine as on later Lange tourbillon movements. Another example is the bevelled edge of the German silver three quarter plate, showing uneven lines.

But the finishing on the Tourbillon Pour le Mérite is not inadequate, it is just not up to the expectations imposed on modern watchmaking. It is still clear that much time and effort were put into its finishing. Take for instance the circular graining (perlage) on the base plate is made up of numerous small circles (albeit with uneven spacing), while newer Lange watches tend to use larger circular graining, which requires less time. The answer to the original question is obvious: not very good. But the Tourbillon Pour le Mérite is a product of the time and place it was conceived, a small East German town in the newly unified country where fine watchmaking had been forgotten for 50 year. In that context, it was a remarkable achievement. Watchmaking has moved on considerably since then, especially at Lange itself. Contemporary masterpieces like the Lange 1 Tourbillon Perpetual Calendar Handwerkskunst and Zeitwerk Minute Repeater prove that. But like those prized vintage Rolex watches with rinky dinky bracelet that are nowhere near as well made as modern Rolex Oysters, the Tourbillon Pour le Mérite is historically significant with a great story to tell.