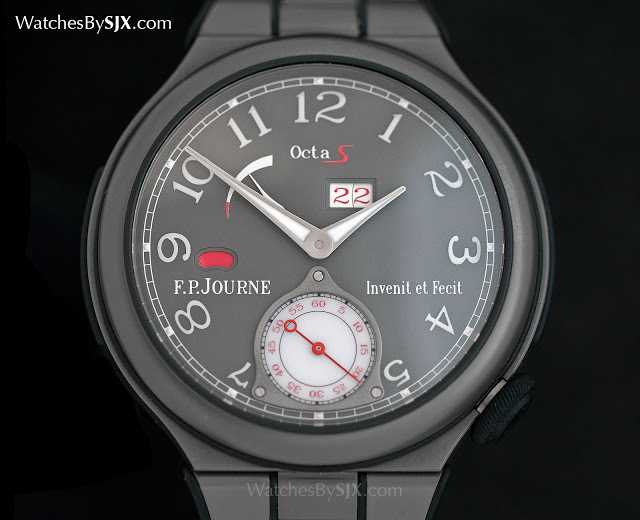 With titanium replacing aluminium, the Octa Sport Titane is entry level F.P. Journe sports watch, yet it retains all the qualities of its precious metal cousins, namely a slim case and elegant proportions. The most obvious difference between the two metals is the darker colour of the titanium, in contrast to the bright silver tone of the aluminium. This is a more appealing aesthetic, especially since the earlier aluminium cases were reminiscent of aluminium Swatch watches. Though the case is now titanium, the dial, movement bridges and base plate remain aluminium. The original lineSport idea was to create an ultra-light sports watch, which meant the signature rose gold movement parts had to be replaced with aluminium. Functionally the calibre 1300.3 is nearly identical to the version used in the precious metal Octa watches, with useful features like a five day power reserve, oversized date and power reserve indicator. An additional function not found on the other Octa watches is the day and night indicator at nine o’clock. Like all F.P. Journe watches, the Octa Sport is slim, with an elegant, rounded form that is uncommon for sports watches. Rubber inserts are found on the sides of the case and bracelet, meant as shock absorbers. While they might serve a useful purpose, the rubber inserts look somewhat out of place on a high-end sports watch. Rubber also deteriorates over time, meaning this inserts will require replacement after several years.

The Octa Sport movement is arguably superior to that found in the Royal Oak 15202 (and definitely superior to the calibre 240 in the Nautilus), but the Octa Sport is not an icon. While the precious metal Journe watches can give timepieces from mainstream brands like Patek Philippe and Lange a run for their money, the Octa Sport is destined to be a watch for an F.P. Journe enthusiast. In fact that was the rationale behind its conception; Journe created it for an important client who wanted to have an F.P. Journe on his wrist regardless of what he was doing. So to answer the original question, even if the Octa Sport trumps a Royal Oak or Nautilus in some respects, it is not the first choice for a sports watch. But for someone who has been there and done that, it merits a look. The Octa Sport Titane retails for US$32,070, or on a rubber strap for US$27,530.

Hands-On with the F.P. Journe Centigraphe Sport in Titanium (With Original Photos & Price)

The lightweight version of F.P. Journe's foudroyante chronograph, the Centrigraphe Sport features an unusual complication with twin gear trains that can potentially measure 1/100th of a second, a feature inherently appropriate for a sports watch.