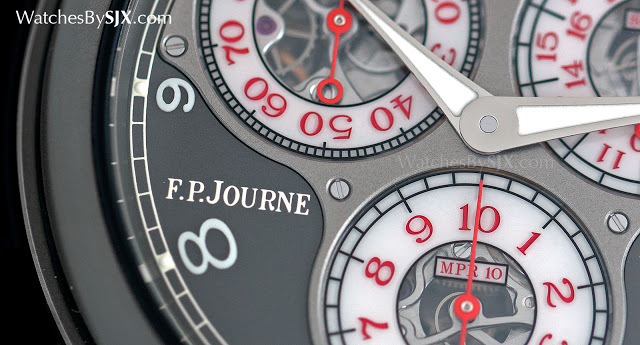 First introduced in aluminium four years ago, the F.P. Journe Centigraphe Sport is now offered in titanium, which weighs a tad more but is still a featherweight at 70 grammes or so. It’s equipped with the calibre 1506, a novel chronograph with a foudroyante (or lightning) seconds hand that can theoretically measure 1/100th of a second. Despite limitations to its functionality, the fraction of a seconds chronograph is the most coherent complication in a sports watch.

Located at 10 o’clock, the lighting seconds makes one revolution a second, ticking six times along the way. That’s because the movement beats at 21,600 beats per hour, which translates into 360 beats per minute and 6 per second. Consequently the foudroyante hand moves in 1/6th of a second increments. The reason it’s a 1/100th of a second chronograph, at least in theory, is because the foudroyante hand can be stopped at any point along the way, even in between the 1/6th of a second stops. That’s done by disengaging the pinion of the seconds hand when the stop button is pushed.

Naturally the human error in stopping the chronograph means the result will never by spot-on, but it nonetheless is a novel take on the fraction of a second chronograph. In an effort to reduce the human error, the Centigraphe uses a rocker at two o’clock to start, stop and reset the stopwatch. That means the fingers can stay in the same place, instead of moving back and forth between buttons as on a conventional chronograph.

One disadvantage of the chronograph is its 10 minute limit, with the minute register at six o’clock reading a maximum of 10 minutes. The counter at two o’clock is a normal elapsed seconds.

All the chronograph functions are driven by an independent gear train, separating the chronograph from the timekeeping mechanism. Both gear trains are powered by the same mainspring, but using the chronograph has no effect on the amplitude (and thus timekeeping) of the watch, since the balance wheel has its own gear train for power transmission. Visually the Centigraphe Sport is typical of Journe’s sports watches, with rubber accents for shock resistance that seem incongruous with the price and positioning of the watch. Its slimness – just 11.6mm high – and lightness make for an elegant profile on the wrist, something absent in most sports watches. Despite the circumscribed chronograph functions, the movement is novel and probably the most appropriate complication for a sports watch. Like the other LineSport watches, the movement has its bridges and base plate made of aluminium, reducing its weight to just 12 grammes. Unlike the Octa Sport which has a fairly ordinary (but also aluminium) automatic movement inside, the Centigraphe Sport makes sense in its entirety since the chronograph is a sporting or military complication. The Centigraphe Sport costs US$48,300 on a rubber strap, and US$54,100 on a titanium bracelet.