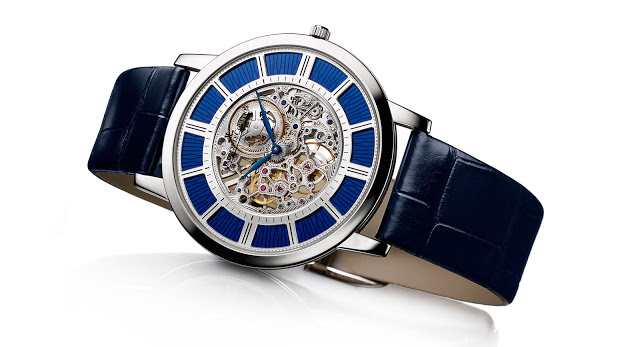 As a warm-up for the Watches&Wonders fair that takes place in Hong Kong at end September, Jaeger-LeCoultre has announced the Master Ultra Thin Squelette decorated with Métiers Rares, or “rare handcrafts”, like skeletonisation and enamelling. And it’s powered by the calibre 849, a hand-wound movement introduced in the 1970s that remains amongst the slimmest ever, despite its age.

The Master Ultra Thin Squelette is equipped with a movement that’s near 40 years old, illustrating the physical limits of movement thinness. Beyond a certain limit the parts are just too thin to be reliable. The calibre 849 was introduced in 1975 and measures just 1.85mm high.

Exceptionally thin, the Master Ultra Thin Squelette claims the title of slimmest watch on the market from the Piaget 900P – by just 0.05mm. Unlike the Piaget 900P that rethinks traditional movement construction, the Master Ultra Thin Squelette’s advantage lies in its case. Reduced to the bare minimum, the case is just 3.6mm high and almost razor like. The circular band of the case is separate from the lugs, which are secured by four screws. And the movement is under a back held down by another four screws. Because the movement is relatively small, the case is 38mm wide, a hand-enamelled chapter ring – in blue or burgundy – sits around the skeletonised movement. It’s pleasing in its proportions, despite the mismatch between case and movement size. The same aesthetic was used for the Grande Reverso Ultra Thin Skeleton, essentially a rectangular version of this watch, as well as the Master Grande Tradition Perpetual Calendar. Also 38mm wide is the Master Ultra Thin Squelette gem-set version, which is 4.7mm high because of the diamonds on the bezel. Instead of enamel the gem-set version has an engraved mother of pearl chapter ring.