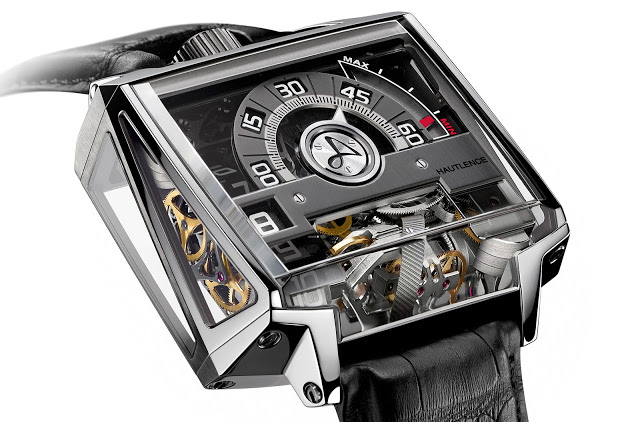 Equipped with the second generation of its impressive rotating escapement calibre,  the Hautlence Vortex displays the time via jumping hours and retrograde minutes, housed in a titanium case with panoramic sapphire crystals. The Hautlence Vortex reimagines the brand’s flagship complication, the rotating escapement with jumping hours. First introduced in the HL2.0, the movement is the most complicated movement Hautlence has developed, comprised of some 552 parts, exceeding the number of components in a minute repeater. Instead of sitting vertically on the wrist, the Vortex is laid out horizontally, instantly making it more wearable. Designed by Berra Blanquer Design Consultants, a Parisian studio responsible for the Louis Vuitton Tambour case, the Vortex case is titanium, as well as large and imposing, measuring 52mm wide and 50mm long. Its form is inspired by glass-covered skyscrapers, with planes that are angular and faceted, fitted with six sapphire crystals on the front, back and sides, revealing the movement in its entirety. The new HLR2.0 movement is functionally similar to that in the HL2.0, with minor modifications for aesthetics and improved functionality. Minutes are indicated on a retrograde scale on the front, with the power reserve located at two o’clock. The hours are shown in a window at eight o’clock. Winding and time setting is done via the crown at 12 o’clock. A 12-link chain with the 12 hour numerals is connected to the escapement, which rotates 60 degrees at the top at every hour as the chain advances. Bevelled gears that mesh at 90 degree angles are required to translate the lateral motion of the gear train into the vertical motion of the escapement and hour chain. One key difference between the HL2.0 and the Vortex is the bridge for the rotating escapement, which is now a cylindrical, three-dimensional form. The movement is automatic, with an 18k white gold micro-rotor and a 40 hour power reserve.