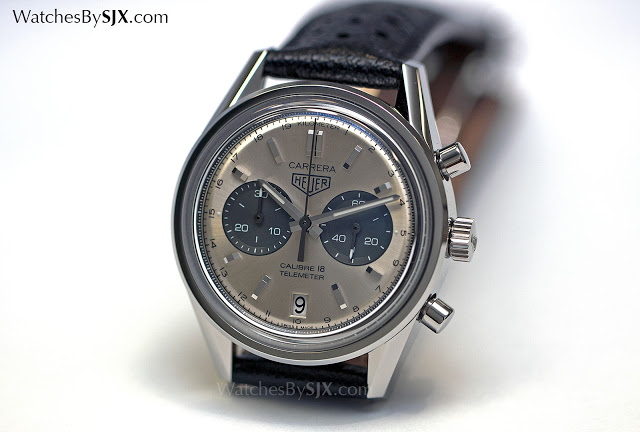 With a rich history of motorsports chronographs to mine, TAG Heuer‘s latest vintage-inspired chronograph looks to the Carrera 30 (a reference to its 30-minute register) of the 1960s. Pleasingly retro with a box-shaped sapphire crystal, the Carrera Calibre 18 Telemeter chronograph features a seldom-seen telemetric scale on the dial. It joins the Monaco Calibre 11 as the key vintage-inspired models in the Baselworld 2015 line-up.

Placed on the outermost track of the dial and graduated in kilometres, the telemeter is used to measure distance to an event, often used for military applications including artillery and naval gunnery. It relies on the speed of sound to approximate the distance between the observer and the event. For instance, the chronograph is started when the muzzle flash of artillery is seen, and stopped when the boom is heard. The original Carrera watches, especially the Carrera 7753 SNT that’s the closest to the Carrera Calibre 18 Telemeter, featured tachymetric scales. Tachymetres are meant to measure an object’s speed over a fixed distance. Tachymetric scales are more relevant for motorsport chronographs, but the telemeter is a more unusual feature. In any case, neither scale is actually used in practice today. Another unusual feature of the watch is the “box-shaped” sapphire crystal, named after the high dome that’s shaped like a box. This mimics the look of the domed crystals found on vintage watches, but is scratch resistant, unlike softer plastic or mineral crystals. It’s also more expensive to produce than the flat sapphire crystals found in most watches. For that reason it’s uncommon in low to mid-priced watches like this Carrera, though becoming more widespread (as economies of scale set in for the sapphire crystal makers like Stettler).

The dial is silvered with a faint golden hue, while the chronograph sub-dials are grey – a pleasing and subtle combination. And the baton hour markers with sloping ends are reminiscent of the vintage originals, as is the “Heuer” logo (sans TAG). The date window, however, looks out of place, but this is a common problem amongst vintage reissues since watch brands have a fondness for date displays even if they are historically inaccurate or incongruous. At 39mm in diameter the Carrera Calibre 18 Telemeter is a good size, small enough to look convincingly vintage while large enough by modern standards. The case is polished throughout, with the lyre-shaped lugs characteristic of the Carrera. The movement is visible through the display back, an ordinary but reliable Sellita SW300 with a chronograph module from Dubois-Depraz. Sellita is of course the well known maker of ETA movement clones, on which the patents have expired. Available starting July 2015, the Carrera Calibre 18 Telemeter is not a limited edition, rather it’s a special edition of sorts with production limited to a year. Prices are as follows: US$6300, S$8650 or €5650.