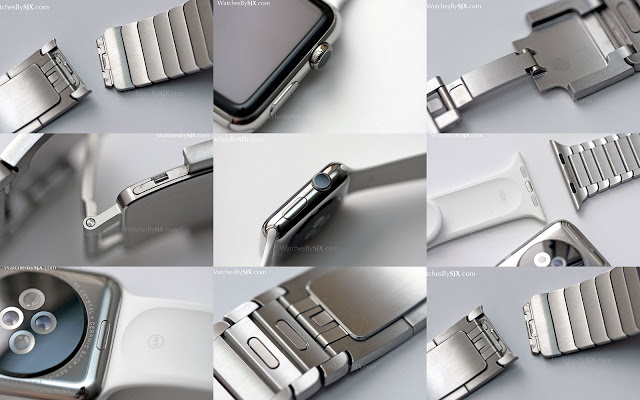 The Apple Watch is reassuringly well made, especially considering its price, which starts at US$349 for the basic Sport model. Compared to timepieces from mainstream watch brands that cost the same, the Apple Watch wins hands-down in terms of tangible build quality. The watch industry is generally sanguine about the impact Apple Watch will have on their business, but they should take a leaf from Apple’s playbook on how to build a well-made watch at a low price.

Apple didn’t reveal how many Apple Watches it sold at its recently quarterly earnings call, though analysts polled by Fortune offers an average of 2.53 million units for the quarter. Whatever it was, the numbers seemed to disappoint, but relatively to the rest of the smart watch market, and even the larger watch market, they are phenomenal.  One report claims Apple sold 4 million for the quarter, giving it 75 percent of the smart watch market globally. In comparison, Switzerland exported 28.6 million watches for the whole of 2014, or about 7 million watches a quarter. Given such economies of scale and its famed manufacturing, the Apple Watch is unsurprisingly impressive in terms of build quality, despite its relatively low price. Like all of Apple’s products its watch is made in China, which should put to shame all the traditional watchmakers that make inferior products in Switzerland for higher prices.

The most impressive thing about the Apple Watch is how well made it is. For a watch that costs US$549 for the stainless steel version pictured here (there are a whole range of models available), the tactile feel is impressive. In fact the Apple Watch has superior case quality compared to other watches in this price range, unsurprising given Apple’s enormous economies of scale.

Extending right to the edge of the case, the sapphire crystal sits on the case (held down by adhesive), fitting almost seamlessly with the case. The ceramic insert on the back for charging is similarly precisely fitted – running a fingernail along its edge reveals no discernible gap. The Digital Crown is finely knurled on its edges, rotating smoothly with no play at all. There is slight play with the button at four o’clock, but that’s characteristic of any sort of pusher (try feeling out the buttons on high-end chronographs).

The band connects to the case seamlessly and conveniently. A small button on the back releases the band, which slides out horizontally. It’s simple, intuitive and quick. Although the case is polished all round, the slot for the bands is brushed on the inside. All the bands (rubber, metal or leather) fit into the lugs with minimal play, meaning the parts fit together precisely.

Especially impressive is the metal link bracelet, which has individual links that can be easily removed by pressing a tiny button on the back. This releases the locking mechanism between the links, allowing them to be separated. Each link is an admirable little feat of manufacturing in itself. The clasp of the link bracelet is wonderfully made, with clean and precise finishing, closing with a satisfying click. It’s worth noting the link bracelet costs US$449, almost as much as the watch. Relative to the watch it costs too much, but in itself it’s leagues ahead of anything offered by traditional watchmakers, even at far higher prices.

Much has been written in tech blogs and magazines about the utility of the Apple Watch so there’s not much left to say. For me personally I find it most useful when it’s inconvenient to handle the phone, for instance running, being at the gym or doing yard work. In these contexts the Apple Watch is exceptionally useful. The rest of the time it does not offer that much more. But its utility will surely be improved with subsequent generations, as Apple has demonstrated time and time again with its other products.  For a look at the insides of the Apple Watch, a movement review of sorts, look at iFixit’s teardown video.

Explaining The Apple Watch From A Watch Nerd's Perspective