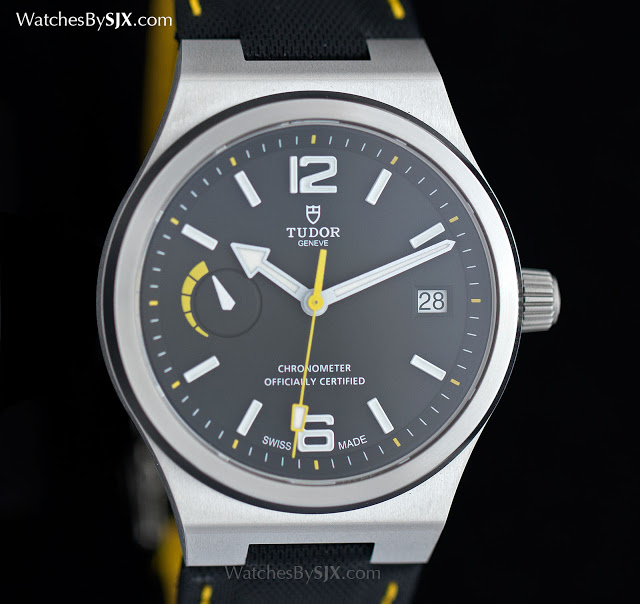 The North Flag represents many firsts for Tudor: it’s equipped with the brand’s first in-house movement visible through its first display back. And it has a power reserve indicator, yet another first. But more important the North Flag has a well constructed movement with useful features, packaged inside an high quality case – at an affordable price. Most most of its history Tudor relied on a straightforward formula: watches in Rolex Oyster cases with ETA movements inside at a lower price point than its big green brother. That began to change in 2009 when current chief executive Philippe Peverelli took the helm, introducing popular vintage-inspired watches like the Black Bay and Heritage Monte Carlo. The aesthetic changed for the better but Tudor still relied on ETA movements (with the odd alarm module made by Soprod in its Heritage Advisor).  The North Flag is a departure from that. It’s a fresh design with the MT5621 movement inside, the very first movement made by Tudor. The look of the North Flag is inspired by the Tudor Ranger II of the 1970s, but fortunately it is not another replica of a vintage watch. When it does bring to mind the 1970s, the North Flag brings back good memories; the integrated bracelet look is reminiscent notably the Genta-designed Patek Philippe Nautilus and IWC Ingenieur SL. The case Despite being modestly sized by today’s standards – the case is 40mm in diameter – the watch feels solid. Everything about the case – finishing, form and detailing – is pleasing to the eye and hand. That being said, this is expected of Tudor (and Rolex of course); I can’t think of a watch from either where the case is poorly made. The construction and finish of the case is impressive, with straight and precise edges all round. Though the case is entirely brushed throughout, missing the finer details like a polished lug bevel found on watches like the Monte Carlo, it looks and feels good. And the ceramic ring in between the bezel and case highlights the dial. The version on a steel bracelet feels reassuringly hefty on the wrist. And the large links of the bracelet are neatly finished, just like the case. By comparison the black leather strap looks ordinary, though the yellow stitching is attractive. The dial If there’s a weakness in its external component it is the dial, which is well done but could be better. The printing for instance is slightly fuzzy up close, and the applied hour markers look simplistic. The movement In a first for Tudor, the North Flag has a display back. It’s still obviously a Tudor (and Rolex) Oyster back, with the trademark fluted edge – that is pleasingly sharp – that’s used to screw down the case back.

The MT5621 movement is Tudor’s first in-house movement, but unsurprisingly there are faint echoes of Rolex, like the full balance bridge with a free-sprung Microstella balance wheel. And it has a silicon hairspring; Rolex just introduced its own silicon hairspring last year. Though totally plain and industrial in its finishing, the MT5621 has impressive specs, far more important than cosmetics at this price point. It has a 70 hour or three day power reserve, as well as a date that can be adjusted at any time (most movements have dates that shouldn’t be adjusted between 9:00pm and 3:00am). Notably these features are identical to that found on the new Rolex calibre 3255 in the Day-Date 40, also just introduced at Baselworld 2015. 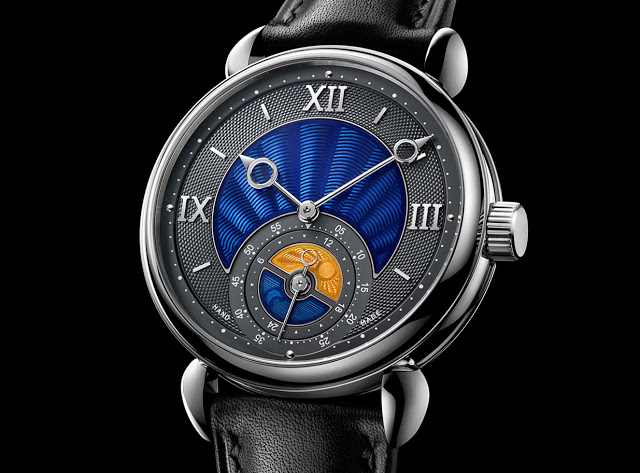 Voutilainen joins all all-star cast of independent watchmakers like F.P. Journe and Speake-Marin who are contributing to charity auction Only Watch 2015 with the GMT-6 Only Watch.

This one of a kind GMT-6 is one of the rare Voutilainen wristwatches to have a champleve enamel dial, made of a disc of solid white gold decorated with guilloche then enamelled in translucent blue on its centre. The calibre 28 inside is based on the movement of the Vingt-8, Voutilainen’s signature chronometer wristwatch. It’s equipped with an exceptionally large, free-sprung balance held aloft by a long steel bridge with rounded arms, similar to that used for high-end tourbillon regulators. And the escapement is a direct-impulse type, with two escape wheels, a set-up that functions more efficient than the traditional lever escapement. Just like the Patek Philippe Reference 5016A and Laurent Ferrier Galet Square that are also part of the Only Watch sale, the GMT-6 has a stainless steel case, measuring 39mm in diameter, though the crown and buckle are white gold. It will be sold on November 7, 2015, alongside 42 other unique timepieces to raise funds for Duchenne muscular dystrophy research.