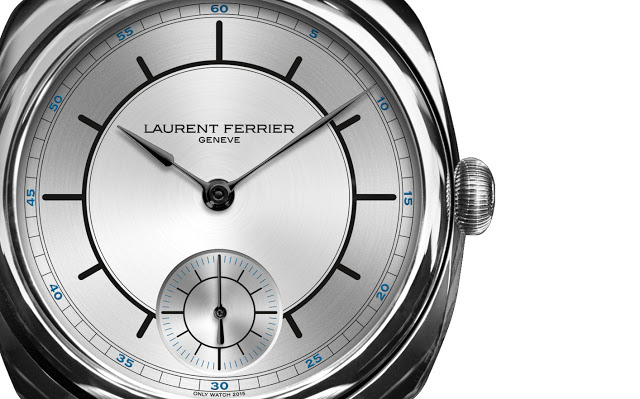 Laurent Ferrier has created a unique version of its Galet Square for Only Watch 2015, featuring a sector dial and steel cushion case reminiscent of early 20th century watches. A variation on the Galet Square that has striking vintage feel, the Laurent Ferrier Only Watch 2015 edition has a silvered sector dial with blue minute numerals and the brand’s signature assegai (a type of African spear) hands. A tiny “Only Watch 2015” at six o’clock indicates the cause for which it was made: the biannual auction in Monaco to raise funds for research into Duchenne muscular dystrophy.  Known as a sector or scientific dial – a style that is mostly found in early or mid-20th century timepieces- the dial has prominent hour markers connected to a track that circles the dial. It is silver-plated with a vertical brushed finish on the central portion and circular satin finish for the chapter ring. The hour markers on are slightly rounded at their points, a reference to the drop-shaped indices on the standard Laurent Ferrier dial. The steel case – Laurent Ferrier uses this material only for prototypes and special editions – measures 41mm by 41mm, with straight lugs instead of the curved lugs typical for the brand. They give the case a look similar to that of early wristwatches.

It’s equipped with the FBN calibre 229.01, a self-winding movement with a micro-rotor designed by Laurent Ferrier together with La Fabrique du Temps, a movement specialist now owned by Louis Vuitton. “FBN” stands for Ferrier, Barbasini and Navas, with the latter two denoting the co-founders of La Fabrique du Temps, Enrico Barbasini and Michel Navas. The movement is traditionally and beautifully finished, but modern in construction; for instance it has a direct impulse escapement with twin escape wheels in silicon. Only Watch 2015 will be held on Novemer 7, 2015 in Monte Carlo, with 40 watches going under the hammer to benefit the Association Monégasque Contre les Myopathies (AMM), a charity that funds research into Duchenne muscular dystrophy. The auctioneer will be Phillips Bacs & Russo. More details are available from Only Watch.